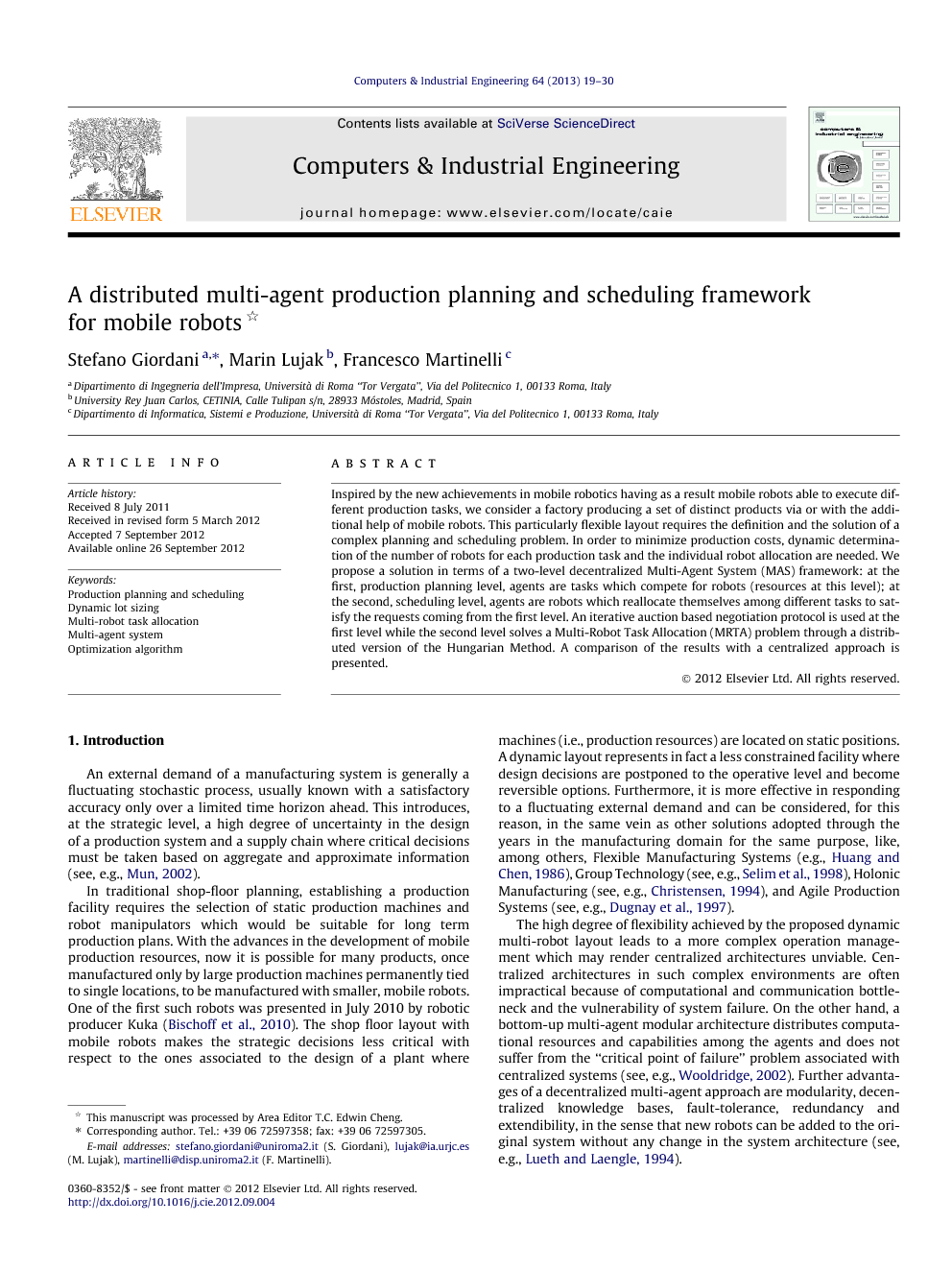 Inspired by the new achievements in mobile robotics having as a result mobile robots able to execute different production tasks, we consider a factory producing a set of distinct products via or with the additional help of mobile robots. This particularly flexible layout requires the definition and the solution of a complex planning and scheduling problem. In order to minimize production costs, dynamic determination of the number of robots for each production task and the individual robot allocation are needed. We propose a solution in terms of a two-level decentralized Multi-Agent System (MAS) framework: at the first, production planning level, agents are tasks which compete for robots (resources at this level); at the second, scheduling level, agents are robots which reallocate themselves among different tasks to satisfy the requests coming from the first level. An iterative auction based negotiation protocol is used at the first level while the second level solves a Multi-Robot Task Allocation (MRTA) problem through a distributed version of the Hungarian Method. A comparison of the results with a centralized approach is presented.

In this paper, a dynamic factory layout with a set of mobile production resources (e.g. robots) carrying out the production, has been proposed. Notice, however, that the latter can also be used to increment the production capacity of already existing machines in the traditional factories. In respect to a classical layout where the production locations are placed on static positions, a less constrained facility is obtained, which allows to postpone critical design decisions to the operative level and makes the plant more capable of responding to a fluctuating external demand. The proposed solution can be considered as an extension of traditional factories since every control policy implemented in plants with a static layout can be applied in the dynamic factory proposed in this paper, while the viceversa is not true. This extension is at the price of a more complex scheduling problem, involving, for each period of the planning time horizon, the determination of the robots’ positions in order to minimize all the production costs. Owing to this complexity, and/or also for the inherent decentralized structure of the system, a two-level decentralized multi-agent system production scheduling architecture was proposed: at the first level the agents are the tasks which compete for the robots, and at the second level the agents are the robots which reallocate themselves among different tasks to satisfy the requests coming from the first level. An iterative auction based negotiation protocol was used at the first level while the second level resolves a Multi-Robot Task Allocation problem through a distributed version of the Hungarian Method. The advantages of the decentralized architecture with respect to the centralized one were discussed in the paper and include robustness and efficiency (notice that the decentralized approach can be in some cases the only viable solution for the structural organization of the system). From the simulation results it can be observed, however, that the lack of information associated with the decentralized solution implies larger production costs, with respect to the centralized approach when the system has a strict number of robots necessary to carry out requested production: in this case, in fact, the centralized approach is characterized by a much higher robot displacement distance with respect to the decentralized solution; the latter tending to under-utilize the production resources and representing a sub-optimal control policy. Moreover, the proposed dynamic layout (even if sub-optimally controlled) shows a significant superiority with respect to a static plant, in particular if the fluctuation of the demand is characterized by low frequency components or by a drift in the average demand: in these cases, in fact, the strategic static sizing of the plant (i.e. the decision on the number of machines which must be dedicated to a particular product) may result completely inappropriate for long time periods, while a dynamic solution with mobile production robots adequately adapts their roles and positions in the plant to track the perturbations.