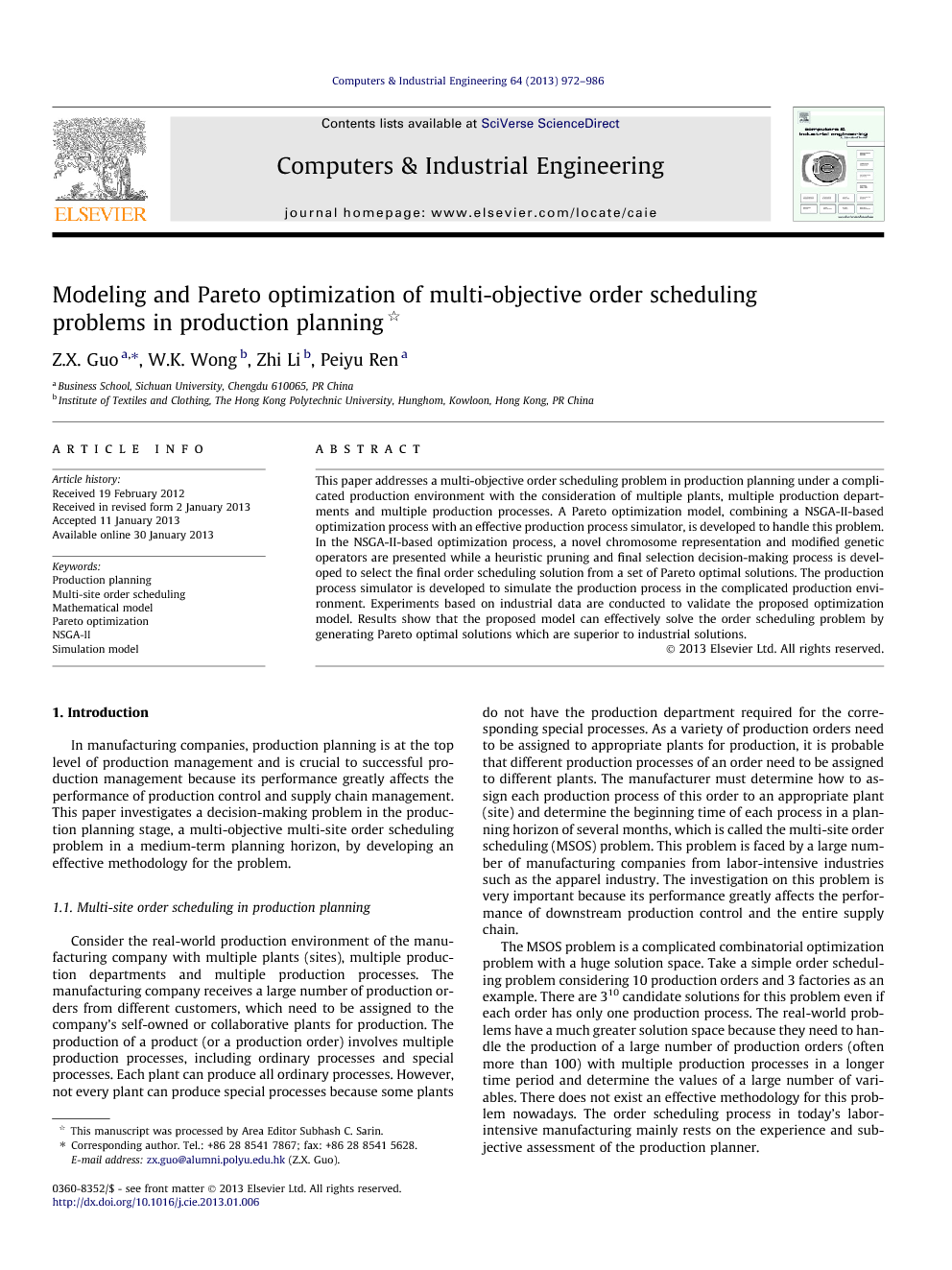 This paper investigates a multi-objective multi-site order scheduling problem in the production planning stage with the consideration of multiple plants, multiple production departments and multiple production processes. The mathematical model for the investigated problem has been established, which considers three production objectives, including minimizing the total tardiness and throughput time of all orders as well as the total idle time in all production departments. These objectives are particularly useful for manufacturing companies to meet due dates and improve management performance. A Pareto optimization model has been developed to generate the Pareto optimal solutions for the problem investigated, in which a NSGA-II-based optimization process was proposed to seek candidate solutions and an effective production process simulator was developed to evaluate the performance of the candidate solutions. In the NSGA-II-based optimization process, a novel chromosome representation and modified genetic operators were presented to handle the investigated problem while a heuristic pruning and final selection decision-making process was developed to select out the final preferred solution from the set of Pareto optimal solutions. In the simulator, a series of heuristic rules were introduced to effectively simplify the processes of optimization seeking and production simulation of all production processes. The effectiveness of the proposed optimization model has been validated by using the industrial data from a labor-intensive manufacturing company. The experimental results demonstrate that the proposed model could handle the investigated problem effectively by providing Pareto optimal solutions much superior to the industrial solutions. The proposed optimization model can be easily extended to handle production outsourcing in labor-intensive industries by considering an outsourcing factory as a production plant. This research is also helpful for manufacturers to make due date negotiations with their customers. Further research will consider the effects of various production uncertainties on production planning, such as uncertain production orders and possible material shortage, and investigate the performances of other pruning methods such as data clustering in final preferred solution and compare its results with those generated by the ranking preference method used in this research. In addition, it is also a desirable direction to develop other intelligent multi-objective optimization models, based on other meta-heuristics such as simulated annealing, evolution strategy, and ant colony algorithm, for the investigated problem and compared the performances of these models with the Pareto optimization model proposed in this research.