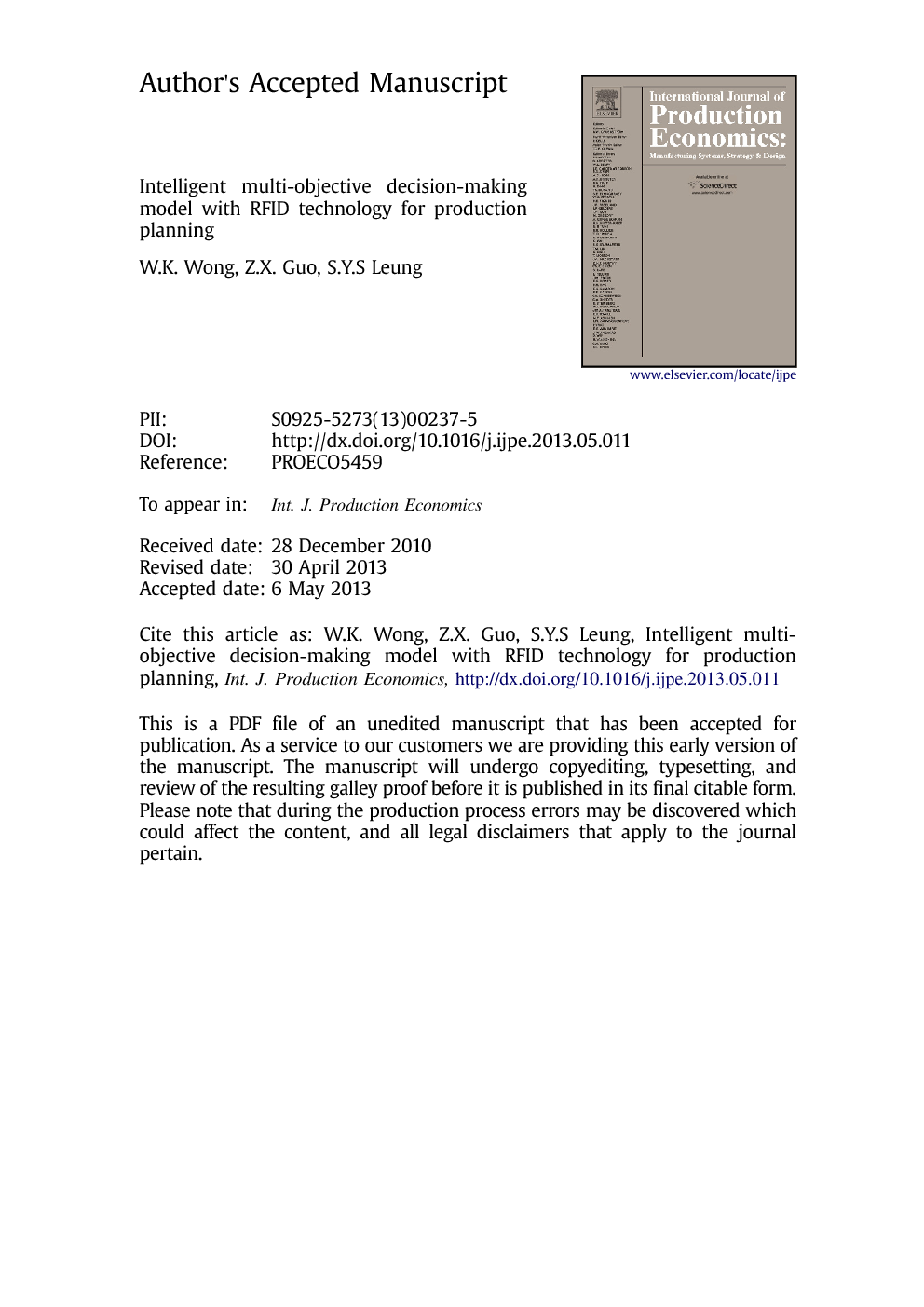 A multi-objective production planning problem in the labor-intensive manufacturing industry is investigated. An intelligent and real-time multi-objective decision-making model is developed to provide timely and effective solutions for this problem by integrating RFID technology with intelligent optimization techniques, in which RFID technology is used to collect real-time production data, a novel (μ/ρ+λ)(μ/ρ+λ)-evolution strategy process with self-adaptive population size and novel recombination operation is proposed and integrated with effective non-dominated sorting and pruning techniques to generate Pareto optimal solutions for real-world production. Experiments based on industrial data were conducted to evaluate the effectiveness of the proposed model. Experimental results show that the proposed model can effectively solve the investigated problem by providing production planning solutions superior to industrial solutions.

In this paper, we investigate a production planning problem in labor-intensive manufacturing industries, the MOA problem with the consideration of multiple plants and multiple production departments, which aims at assigning production processes of each order to appropriate plants. A novel IRMD model was developed to deal with the investigated problem, which consists of a RPDC submodel, a HDEA submodel and an ESPO submodel. The RPDC submodel captures necessary production data for further data extraction and optimizing processes from production workstations by integrating commercial RPDC systems. The HDEA submodel extracts necessary data from production data collected by the RPDC submodel as the inputs of the ESPO submodel. The ESPO submodel constructs a novel optimum-seeking process to obtain effective order allocation solutions for real-world production by integrating a multi-parent recombination operator, a faster non-dominated sorting technique, a self-adaptive population size adjustment method and a solution pruning technique into the (μ/ρ+λ)--ES process. Real-time production data from industrial practice were obtained based on the RPDC submodel, and utilized to validate the proposed IRMD model. Experimental results demonstrated that the proposed model can solve the MOA problem effectively by providing Pareto optimal solutions superior to the industrial solutions. The self-adaptive population size adjustment during the evolutionary process is helpful to improve the optimum-seeking performance of multi-objective optimization processes. This research does not compare the IRMD model developed with others in the area of production planning research since similar research has not yet been published. Further research will focus on the improvement of the methodology to solve MOA problems with more production objectives and practical constraints, and on the effects of various uncertainties on production planning, including uncertain production orders and possible material shortage.