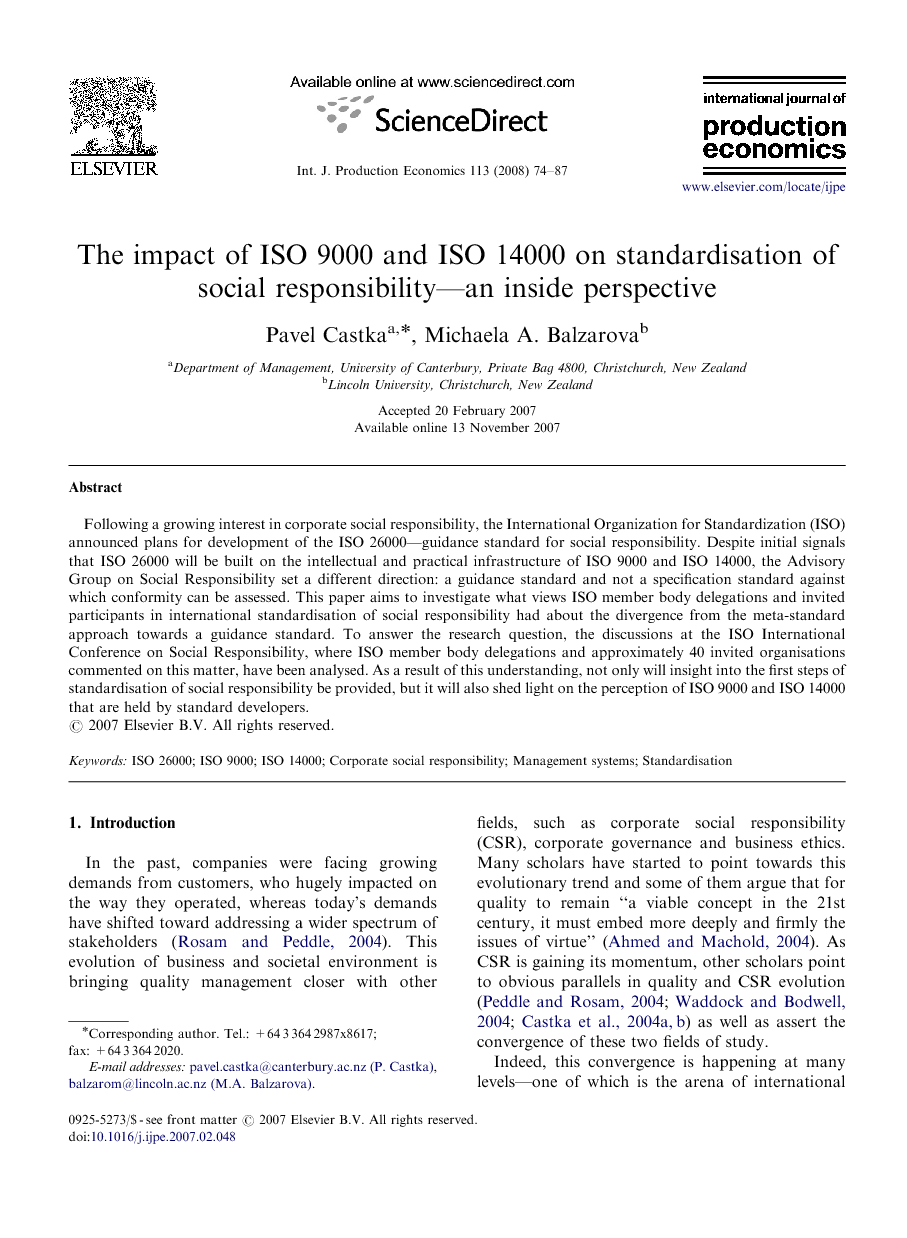 Following a growing interest in corporate social responsibility, the International Organization for Standardization (ISO) announced plans for development of the ISO 26000—guidance standard for social responsibility. Despite initial signals that ISO 26000 will be built on the intellectual and practical infrastructure of ISO 9000 and ISO 14000, the Advisory Group on Social Responsibility set a different direction: a guidance standard and not a specification standard against which conformity can be assessed. This paper aims to investigate what views ISO member body delegations and invited participants in international standardisation of social responsibility had about the divergence from the meta-standard approach towards a guidance standard. To answer the research question, the discussions at the ISO International Conference on Social Responsibility, where ISO member body delegations and approximately 40 invited organisations commented on this matter, have been analysed. As a result of this understanding, not only will insight into the first steps of standardisation of social responsibility be provided, but it will also shed light on the perception of ISO 9000 and ISO 14000 that are held by standard developers.

ISO 9000 and ISO 14000 significantly influenced the first steps in standardisation of social responsibility. Indeed, the global diffusion of both of these standards and its meta-standard approach to standardisation of ‘management practice’ gave the initiators of social responsibility standardisation an approach to grasp the social responsibility agenda (ISO/Bulletin, 2002). This is true not only for national standards such as DR03028 (2003) and SII10000 (2001), but also for standards such as SA8000 (2001) and AA1000 (1999). SA8000 was designed as an auditable standard for a third-party verification system and AA1000 is an accountability standard, focused on securing the quality of social and ethical accounting, auditing and reporting. Both of these are built around notions of policies, audits, management reviews and continuous improvement, which are typical elements of ISO 9000 and ISO 14000. ISO 26000 avoided third-party certification, yet this can cause problems and raise further questions. Research shows that guidance documents are often widely unknown and their purpose is unclear (Boys et al., 2004). The risk here is that a guidance document, without a clear purpose and questionable credibility, can hamper the adoption and diffusion process of ISO 26000. Indeed, third-party certification can provide at least some level of confidence even if it is perceived as having eroded credibility. Hence ISO 26000 will have to find other ways to insure that the standard is not misused. One of the ways would be to use the approach of UN Global Compact and require companies to disclose information about the ways it supports ISO 26000 and its principles. Other approaches can encompass different certification schemes tailored to the type of claims that the organisation makes. Developments in these areas are necessary for ISO 26000 to add value to the uptake of the social responsibility agenda.