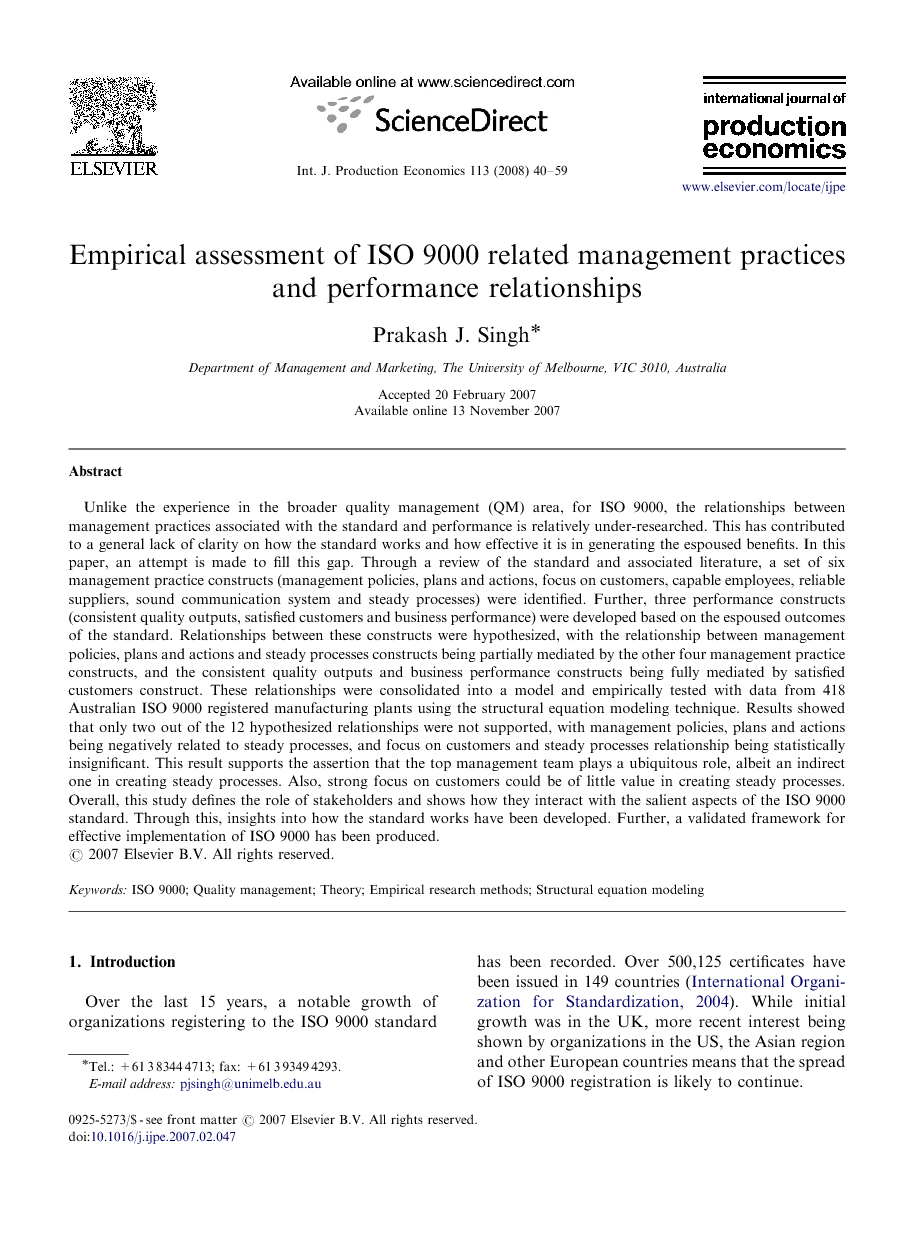 Unlike the experience in the broader quality management (QM) area, for ISO 9000, the relationships between management practices associated with the standard and performance is relatively under-researched. This has contributed to a general lack of clarity on how the standard works and how effective it is in generating the espoused benefits. In this paper, an attempt is made to fill this gap. Through a review of the standard and associated literature, a set of six management practice constructs (management policies, plans and actions, focus on customers, capable employees, reliable suppliers, sound communication system and steady processes) were identified. Further, three performance constructs (consistent quality outputs, satisfied customers and business performance) were developed based on the espoused outcomes of the standard. Relationships between these constructs were hypothesized, with the relationship between management policies, plans and actions and steady processes constructs being partially mediated by the other four management practice constructs, and the consistent quality outputs and business performance constructs being fully mediated by satisfied customers construct. These relationships were consolidated into a model and empirically tested with data from 418 Australian ISO 9000 registered manufacturing plants using the structural equation modeling technique. Results showed that only two out of the 12 hypothesized relationships were not supported, with management policies, plans and actions being negatively related to steady processes, and focus on customers and steady processes relationship being statistically insignificant. This result supports the assertion that the top management team plays a ubiquitous role, albeit an indirect one in creating steady processes. Also, strong focus on customers could be of little value in creating steady processes. Overall, this study defines the role of stakeholders and shows how they interact with the salient aspects of the ISO 9000 standard. Through this, insights into how the standard works have been developed. Further, a validated framework for effective implementation of ISO 9000 has been produced.

Over the last 15 years, a notable growth of organizations registering to the ISO 9000 standard has been recorded. Over 500,125 certificates have been issued in 149 countries (International Organization for Standardization, 2004). While initial growth was in the UK, more recent interest being shown by organizations in the US, the Asian region and other European countries means that the spread of ISO 9000 registration is likely to continue. Whilst popular, ISO 9000 is not beyond reproach. There is no clear-cut evidence of its effectiveness. Studies that have evaluated whether ISO 9000 registration makes a difference to organizations’ performance show mixed results. Some studies show that there is little difference in operational and financial performance between registered and non-registered organizations (Simmons and White, 1999; Terziovski et al., 1997; Rahman, 2001; Lima et al., 2000), whilst others show that ISO 9000 registered organizations perform better than non-registered organizations (Corbett et al., 2002; Terziovski et al., 2003; Carr et al., 1997). In some cases, ISO 9000 appears to selectively affect certain types of performance. For instance, Naveh and Marcus (2005, p. 1) found that “implementing the ISO 9000 standard led to improved operating performance, but that this outcome did not necessarily or automatically yield better business performance”. One approach to making sense of this confusing situation would be to carefully evaluate the key prescriptions of the standard and assess their ability to generate the espoused benefits. This, in essence, would require an understanding of the relationships of various management and organizational practices that are integral part of the standard, with the set of performance expectations associated with the standard. Such a line of inquiry has been a popular research theme in the broader quality management (QM) area, with many studies devoted to explicating the management practice–performance nexus (see Sousa and Voss (2002) and Nair (2006) for summaries of these studies). As a result of these studies, there is momentum developing towards consensus on issues such as what these QM practices are, how they are inter-related, the effect they have on performance, and the effect of moderating and contextual factors on these relationships. These are dove-tailing towards the eventual emergence of an underlying theory upon which QM is based (Nair, 2006). All of these are contributing towards a more nuanced understanding of QM, which is further resulting in its improved credibility amongst researchers and practitioners. Accepting that ISO 9000 is different from (but not inconsistent with) the broader QM concept (Corbett et al., 2005), a review of the extant literature showed that, surprisingly, there is a paucity of research that has focused on how ISO 9000 related management practices impact upon performance. A number of researchers have commented on this state of knowledge. For example, Corbett and Kirsch (2001, p. 328) state that “[t]here is little evidence on how ISO 9000 certification affects quality or business performance”. Similarly, Naveh and Marcus (2005, pp. 4–5) comment that “[i]mplementation of ISO 9000 should make an organization's operating performance go up, but consistent results that could verify this proposition are not found in the literature”. Likewise, Simmons and White (1999, p. 340) observe that the “relationships between ISO 9000 and business performance are complex and our understanding of these relationships is underdeveloped”. Further, they claim that “while there has been much published work on various issues associated with ISO 9000, research in this area has lacked systematic measurement and multi-organization comparisons” (Simmons and White, 1999, p. 331). A consequence of this is that it is difficult to resolve the quandary related to effectiveness of ISO 9000 expressed earlier. Further, the knowledge base associated with ISO 9000 has remained relatively underdeveloped as a result of the relative lack of the high-quality research of the type that is associated with QM. Therefore, this is the gap in knowledge relating to the standard that is the focus of this paper. The question investigated is: Is ISO 9000, through the management practices associated with the standard, able to produce the espoused benefits? In this paper, applying methods similar to that used in other QM studies, a theoretical model that encapsulates the relationships between key constructs of ISO 9000 is presented. This model was then empirically tested with data from a study of 418 manufacturing organizations. Structural equation modeling procedure was used to analyze the data. The results provide several useful insights into the standard. Firstly, insofar as a hypothesized model is presumed to be an accurate representation of how the standard is meant to operate, the empirical test results provide evidence for the extent of support for this model. Secondly, the results could contribute to the articulation of a theory that explains the operation and effectiveness of the standard. Finally, these all contribute to a more nuanced understanding of how the standard operates and its ability to influence performance of firms. In the next section, the key management practice and performance constructs associated with ISO 9000 are identified, along with the hypothesizing of the inter-relationship between these constructs. Then, the methodological issues associated with empirically testing the hypothesized relationships are presented. In the subsequent section, the results are presented and analyzed. This is followed by a discussion of the results. The paper concludes with an assessment of the implications of this study's findings, recommendations for future research and identification of the weaknesses of this study.

The SEM test results of the hypothesized model shown in Fig. 1 indicated that the ISO 9000 model had acceptable fit with data. This enabled assessment of individual hypothesized relationships between constructs. This assessment showed that all bar two relationships were empirically supported. The first relationship that was not as hypothesized was between the management policies, plans and actions, and steady processes constructs; the results showing a negative direct relationship. The second relationship that was not empirically supported was between focus on customers and steady processes constructs, this being statistically insignificant. These findings have several implications and make a number of contributions. Firstly, it contributes to development of knowledge in the area. Much of the research related to ISO 9000 is made up of conceptual and simple case studies. This paper goes further than most by proposing a theoretical model that attempts to represent the manner by which management practices related to ISO 9000 relate to various organizational outcomes. This model supports the assertion of ISO and others that it is the senior management team's responsibility to establish the other organizational practices through which organizations can maintain stable process. This, in turn, enables performance-related outcomes to be generated. For the management-practices-related constructs, the relationship between management's role and steadiness of processes is partially mediated by the other management practice constructs, and the operating and financial performance relationship is fully mediated by customer satisfaction. In proposing and then finding support for most aspects of this model, an obvious gap in the knowledge base of the standard has been covered. Secondly, the findings could guide practice related to ISO 9000. The absence of a strong empirically supported underlying theoretical model on which ISO 9000 is based means that organizations are effectively implementing ‘unproven’ ideas. Indeed, it appears that most organizations implement the standard based on intuition, executive judgment and competitive and customer pressure (Carlsson and Carlsson, 1996; Anderson et al., 1999). In doing so, it could well be that organizations are focusing on aspects that may not be so important, whilst those that may need to be strengthened could possibly be ignored. Instead of implementing unproven frameworks, the validated model presented in this paper can guide the actions of practitioners in terms of elements to emphasize (building employee capabilities, strong relationships with suppliers and sound communication systems) vis-à-vis those that do not need the same level of attention (direct involvement of management in processes, focusing excessively on customers). In addition, the model predicts about 16% of the variance in business performance. Given the intense level of competition organizations face, explanation of this level of performance would be significant for most. Ignoring this level of performance prediction would not be wise for most organizations (Samson and Terziovski, 1999). Lastly, the results of this study have implications for authors of the standard. This paper shows that one important construct (focus on customers) is a redundant element of the total system, relative to constructs such as capable employees, reliable suppliers and sound communication systems. In other words, it is evident from this study that most organizations regard employee capability building, documentation and supplier management practices as still the strongest aspects of the standard. If the authors of the standard still desire to broaden the scope of ISO 9000 to include those elements that have been found to be redundant, serious review of the standard would be warranted. The results of this study also show that the direct influence of management on processes is a destructive one. This suggests that management needs to take a ‘hands-off’ approach to processes, and have only an indirect supervisory role, a position supported by Naveh and Erez (2004). If the standard writers insist on greater involvement of managers in all aspects of processes, then the impediments in the standard to this taking place will need to be overcome. A number of limitations could be affecting the findings of the study and their generalizability. These can be overcome in future studies. One of the limitations relates to the basic assumption that is made regarding how the standard works. This paper took a rationalistic and functionalistic view of the standard. However, many organizations seek registration to the standard for reasons other than deriving intrinsic benefits from the standards (Boiral, 2003; Guler et al., 2002). It is possible that if these other factors are taken into account, the form of the theoretical model presented in this paper would be significantly different. A second limitation is the domain in which the model has been validated. This study involved manufacturing sector plants in Australia. Future empirical validation of the model could be based in non-manufacturing sectors and in other countries. These would provide further insights that would assist in generalizing knowledge related to the standard.