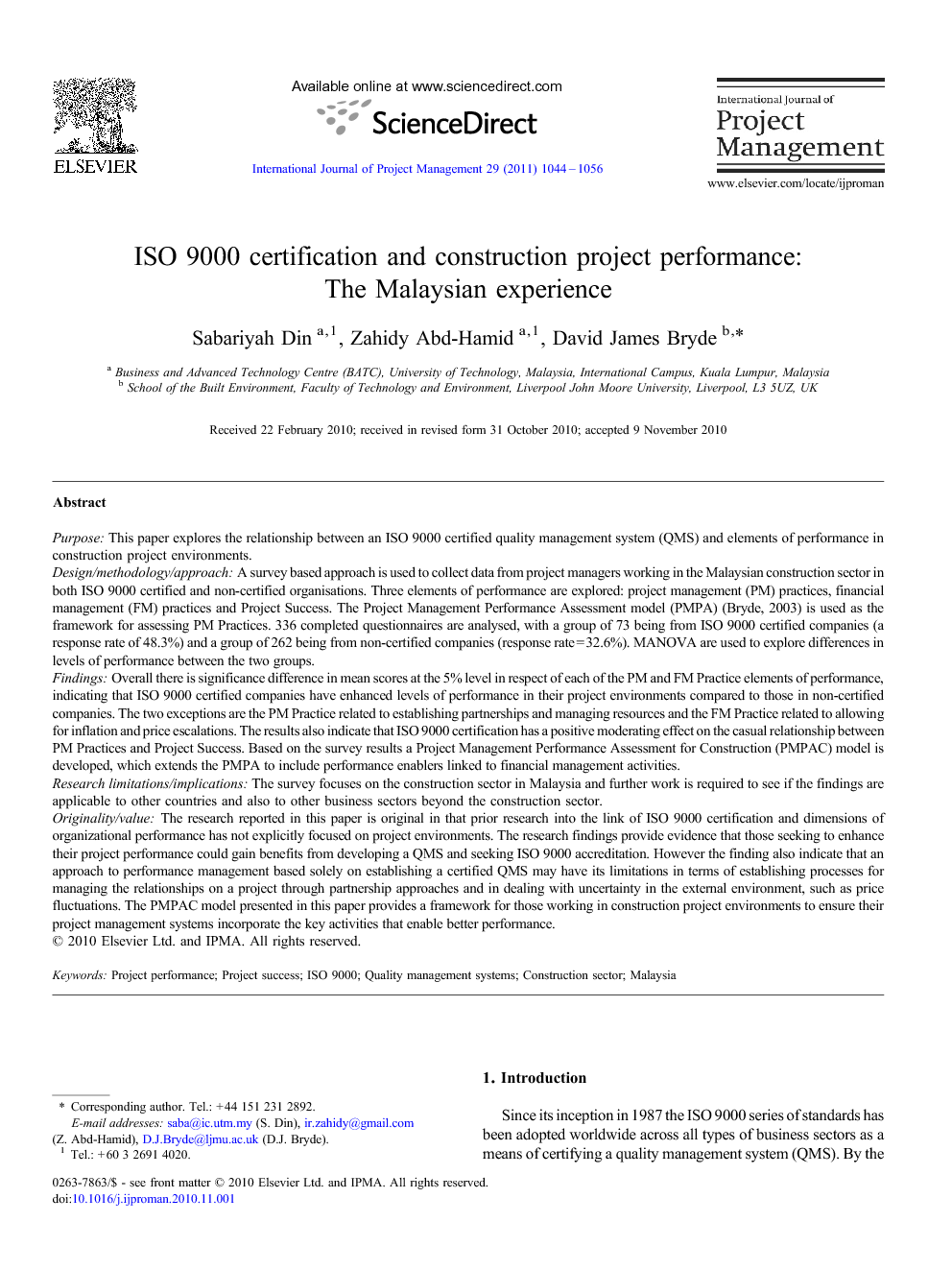 This paper explores the relationship between an ISO 9000 certified quality management system (QMS) and elements of performance in construction project environments.

Since its inception in 1987 the ISO 9000 series of standards has been adopted worldwide across all types of business sectors as a means of certifying a quality management system (QMS). By the end of 2008 there were 982,832 ISO 9000 certified companies worldwide, representing an increase of 31,346 (3%) since 2007 (The ISO Survey, 2010). This reflects an annual growth rate of 20% (1995–2006) in the number registered with the International Standards Organisation (Martinez-Costa et al., 2009). The certification movement has its origins in manufacturing and is predicated on the theory that the development and application of standards — in the case of ISO 9000 linked to a QMS, enhances organizational development and contributes to performance (Schlickman, 2003, p.12). So quality products are produced through assuring the quality of the manufacturing process. Whilst having its roots in manufacturing the ISO 9000 standard is now adopted by many business sectors, including service industries. One such sector is construction. In the 1990s the sector was criticized for poor performance, with issues identified including ineffective tendering-based procurement methods and a lack of partnering-based approaches (Black et al., 2000), lack of project management experience, skills and knowledge (Lim and Mohamed, 2000), organization fragmentation (Berggen et al., 2001), and poor change and communication management (Yates and Eskander, 2002). In light of this perception of poor performance, Egan, in his landmark report into the state of the industry and the way forward, challenged construction to learn from manufacturing. He stated that 5 years hence the industry should “deliver its products to its customers in the same way as the best customer-led manufacturing and service industries” (Egan, 1998: p.40). Although there were some dissenting voices, who argued that construction was too different to manufacturing to be a perfect exemplar of good practice i.e. Kazaz and Birgonul (2005), the common response of the sector was to take up Egan's challenge. As such, management techniques initially developed in the manufacturing sector, such as just-in-time and lean production, have in recent years been adopted by construction companies. As part of this adoption QMSs were effectively applied to construction project environments, with desirable outcomes achieved from such application (Serpell, 1999). It is this desire to adopt practices from manufacturing that has fuelled a worldwide drive, which in some places is continuing apace, for construction companies to have ISO 9000 certification. One country in which the drive has gained great momentum in the last few years is Malaysia. The Malaysian construction sector makes a significant contribution to the nation's economy, with the GDP for the industry showing an increase from RM6.964 billion in 2000 to RM7.133 billion in 2005 (CIDB, 2007). It is now compulsory for all construction companies to be registered with the Construction Industry Development Board Malaysia (CIDB) before undertaking their business operations in Malaysia. New regulations required Grade G7 contractors, the highest grade, to be certified with the ISO 9000 QMS as a compulsory condition of registration by January 1st, 2009. Failure resulted in being downgraded, which adversely impacts on the ability to do business. The Malaysian experience mirrors that of other countries. For example in Australia, Hong Kong and Singapore regulations were imposed requiring construction companies to be ISO certified in order to qualify to bid for public sector building projects (Pheng and Shina, 2000). In Malaysia the perceived benefits of having ISO 9000 specifically relate to providing enhanced functionality and being better able to satisfy project clients (Ali and Rahmat, 2010). Table 1 provides a summary of studies into the link between ISO 9000 certification and elements of performance. The studies have tended to focus on two broad elements of performance: financial and organizational. Studies interested in financial performance use secondary data sources, such as company annual accounts and national databases that report various dimensions of financial performance i.e. earnings before taxes and return on assets (see, for example, Martinez-Costa and Martinez-Lorenta, 2007). Organizational performance is typically defined as a multi-dimensional construct and data are collected mainly using perceptual-based measures. An example in Table 1 is Martinez-Costa et al. (2009), who surveyed employees to obtain opinions on cost, delivery, timeliness, flexibility and quality of production, and customer and employee satisfaction. The surveys cover all geographical regions, whilst the majority are not industry-specific. None of the surveys focus exclusively on the link between ISO 9000 certification and project performance. Karim et al. (2005) investigate some perceived project-related benefits but this is part of a wider study of various organizational benefits and does not involve statistical analysis of differences in performance between ISO 9000 certified and non-certified companies. 4 of the studies focus on the construction sector, yet these are relatively small in scale: Ofori and Gang (2001) — n = 33, Dissanayaka et al. (2001) — n = 33, Karim et al. (2005) — n = 67 and Chini and Valdez (2003) — n = 54. Furthermore none of these surveys undertake statistical analysis to compare levels of performance between ISO 9000 certified and non-certified companies and none consider in-depth the impact of a QMS on a range of project performance dimensions. The detail in Table 1 confirms the view that there has been limited large-scale research focused on analyzing the link a certified QMS and levels of performance in construction project environments (Barad and Raz, 2000) and that the role of certified QMSs in the construction industry is still an under-researched area (Turk, 2006). Given that a gap in the extant literature exists, coupled with the current pressures on construction companies in countries like Malaysia to become certified, there is a timely need for research in this area. Such research should focus not only on investigating if a link exists but also on a more finely grained examination of how any links are constructed. Therefore the objective of the research, which is reported in this paper, is to understand if and how ISO 9000 certification impacts on project performance. The remainder of this paper is structured as follows: firstly, the conceptual framework for the research is introduced; then, the research method is detailed; this is followed by a presentation and discussion of the research findings; limitations and areas for further study are then outlined; and lastly, some conclusions are drawn.

To conclude, this paper reports the findings of research into the association between an ISO 9000 certified QMS and performance in construction environments in Malaysia. The research found that, overall, those project managers working on projects in ISO 9000 certified environments reported higher levels of PM and FM Practices on a recently completed project compared to their counterparts working in non-ISO 9000 certified project environments. However there were some notable exceptions, namely: there was no difference between the two groups in the areas of partnering and the management of resources and processes for dealing with inflation and price escalation. These exceptions suggest possible limitations of relying exclusively on a strategy of ISO 9000 to improve construction project performance. The results also indicate that ISO 9000 certification has a positive moderating effect on the causal relationship between PM Practices and Project Success. Overall, the findings suggest a symbiotic relationship between a certified QMS and a PM system in project-oriented organizations such as construction. On the one hand the demands of an ISO 9000 certified QMS, in respect of its role in defining and operating key business processes, which in construction companies are focused on projects, can lead to enhanced organizational performance. On the other hand the knowledge and experiences from operating a PM system can be utilised in designing and managing a QMS that is effective, efficient and fit for purpose. The research reported in this paper, which reveals a relationship between ISO 9000 certification and financial management-related activities undertaken by project managers, results in a proposed extension to the Project Management Performance Assessment (PMPA) model (Bryde, 2003). This extension provides the rationale for the development of the Project Management Performance Assessment for Construction (PMPAC) model, which incorporates FM Activities as an enabling activity leading to enhanced PM performance.