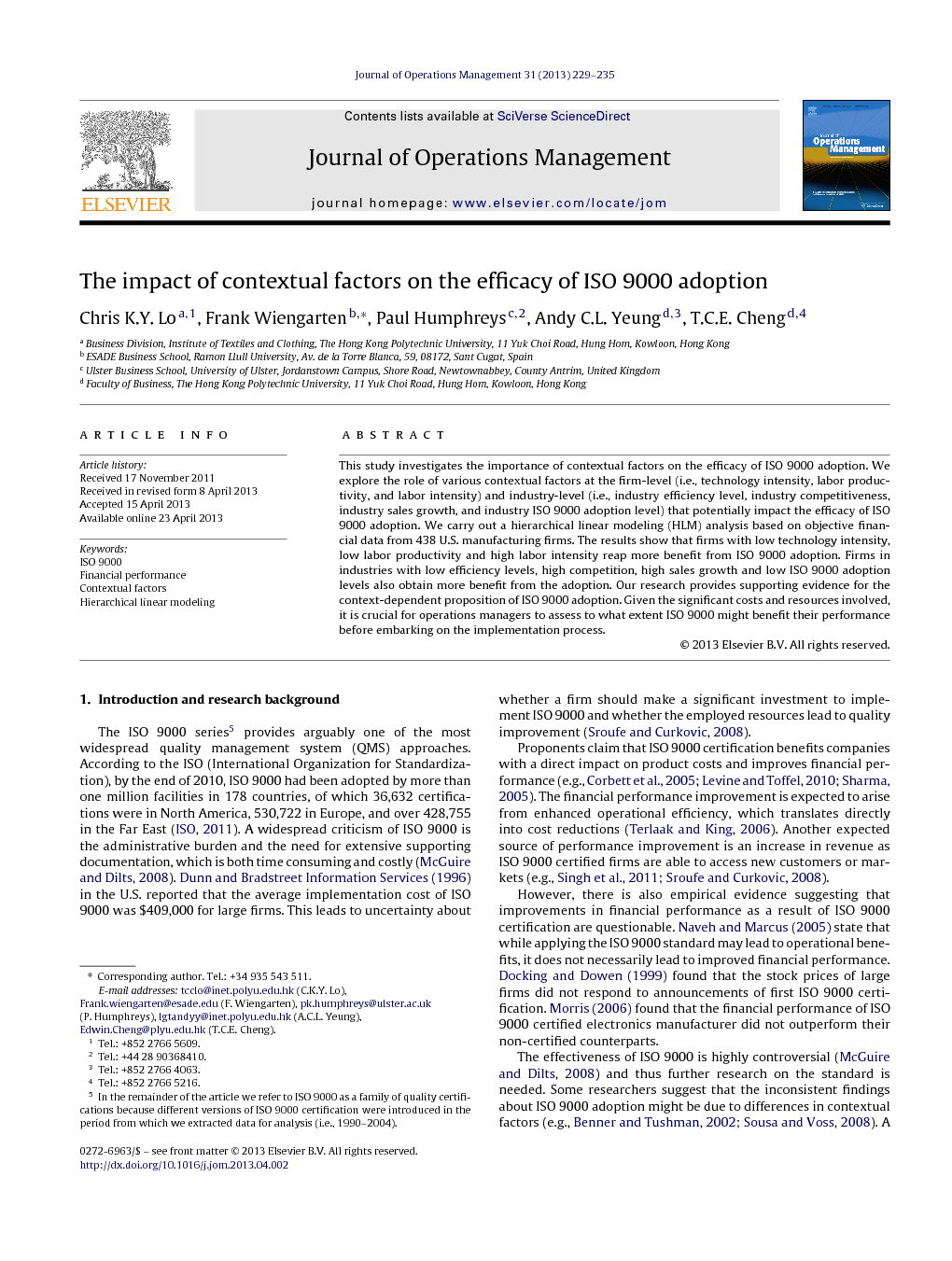 This study investigates the importance of contextual factors on the efficacy of ISO 9000 adoption. We explore the role of various contextual factors at the firm-level (i.e., technology intensity, labor productivity, and labor intensity) and industry-level (i.e., industry efficiency level, industry competitiveness, industry sales growth, and industry ISO 9000 adoption level) that potentially impact the efficacy of ISO 9000 adoption. We carry out a hierarchical linear modeling (HLM) analysis based on objective financial data from 438 U.S. manufacturing firms. The results show that firms with low technology intensity, low labor productivity and high labor intensity reap more benefit from ISO 9000 adoption. Firms in industries with low efficiency levels, high competition, high sales growth and low ISO 9000 adoption levels also obtain more benefit from the adoption. Our research provides supporting evidence for the context-dependent proposition of ISO 9000 adoption. Given the significant costs and resources involved, it is crucial for operations managers to assess to what extent ISO 9000 might benefit their performance before embarking on the implementation process.

The ISO 9000 series5 provides arguably one of the most widespread quality management system (QMS) approaches. According to the ISO (International Organization for Standardization), by the end of 2010, ISO 9000 had been adopted by more than one million facilities in 178 countries, of which 36,632 certifications were in North America, 530,722 in Europe, and over 428,755 in the Far East (ISO, 2011). A widespread criticism of ISO 9000 is the administrative burden and the need for extensive supporting documentation, which is both time consuming and costly (McGuire and Dilts, 2008). Dunn and Bradstreet Information Services (1996) in the U.S. reported that the average implementation cost of ISO 9000 was $409,000 for large firms. This leads to uncertainty about whether a firm should make a significant investment to implement ISO 9000 and whether the employed resources lead to quality improvement (Sroufe and Curkovic, 2008). Proponents claim that ISO 9000 certification benefits companies with a direct impact on product costs and improves financial performance (e.g., Corbett et al., 2005, Levine and Toffel, 2010 and Sharma, 2005). The financial performance improvement is expected to arise from enhanced operational efficiency, which translates directly into cost reductions (Terlaak and King, 2006). Another expected source of performance improvement is an increase in revenue as ISO 9000 certified firms are able to access new customers or markets (e.g., Singh et al., 2011 and Sroufe and Curkovic, 2008). However, there is also empirical evidence suggesting that improvements in financial performance as a result of ISO 9000 certification are questionable. Naveh and Marcus (2005) state that while applying the ISO 9000 standard may lead to operational benefits, it does not necessarily lead to improved financial performance. Docking and Dowen (1999) found that the stock prices of large firms did not respond to announcements of first ISO 9000 certification. Morris (2006) found that the financial performance of ISO 9000 certified electronics manufacturer did not outperform their non-certified counterparts. The effectiveness of ISO 9000 is highly controversial (McGuire and Dilts, 2008) and thus further research on the standard is needed. Some researchers suggest that the inconsistent findings about ISO 9000 adoption might be due to differences in contextual factors (e.g., Benner and Tushman, 2002 and Sousa and Voss, 2008). A number of researchers have also suggested the need to consider in more depth the influence of contextual factors within operations management (OM) (e.g., Sila, 2007, Sousa and Voss, 2008, Swink and Jacobs, 2012 and Zhang et al., 2012). With the widespread adoption of ISO 9000 worldwide, it is increasingly important for OM researchers to examine the interrelationships among ISO 9000 adoption, firm performance, and contextual factors. The objective of this paper is to answer the following research question: Under what contextual factors is the efficacy of ISO 9000 adoption stronger? Operations managers need to assess whether the adoption of a specific OM practice is an appropriate fit with the contextual factors. They should not simply take an institutional response and follow others in adopting a standard set of operational practices, but analyze the contexts of their organization and implement operational practices that best suit their needs. From an OM perspective, contextual factors have been categorized as strategic goals, structural contingencies, and environmental/institutional factors (Ketokivi and Schroeder, 2004 and Sousa and Voss, 2008). This study extends previous research by studying various contextual factors at the firm-level (i.e., technology intensity, labor productivity, and labor intensity) and industry-level (i.e., industry efficiency level, industry competitiveness, industry sales growth, and industry ISO 9000 adoption level).

Our findings may help operations managers determine whether they should implement process standards like ISO 9000 and whether they should require their suppliers to be certified for such standards. Clearly, some firms are under pressure from customers to adopt ISO 9000. Operations managers need to question the efficacy of such an approach. Should organizations require suppliers to be ISO 9000 certified if their suppliers are, e.g., highly technology-intensive, highly automated (low labor intensity), and in efficient industries in which high-quality requirements are already well embedded? Our research findings would suggest that this may not necessarily be a viable approach. We are concerned that such an approach may actually compromise some adopting firms’ performance in the long run. The findings of this study suggest that a one-size-fits-all approach to ISO 9000 certification may not ultimately lead to optimal outcomes. As pointed out by Zhang et al. (2012), there is a need to move beyond simply justifying quality practices and focus on a clear understanding of the contextual factors. This shift to refining our understanding of quality practices is supported by a number of studies (Das et al., 2000 and Sila, 2007). Our results show that operations managers in different contextual environments need to think carefully about the likely performance benefits to be derived from ISO 9000 adoption for their organizations. The performance benefits and success of the ISO 9000 standard are dependent in part on the various contextual factors examined in our study. Therefore, practitioners should not simply follow other organizations by applying a standard set of institutionalized OM practices. They should analyze their firm and industry contexts and implement appropriate operational practices to achieve operational excellence. Our findings need to be carefully interpreted due to the limitations associated with the research. Our sample consists of publicly listed manufacturing firms in the U.S. The impact of ISO 9000 on private firms or firms in the service sector could be quite different. Moreover, ISO 9000 certification is normally conducted at the plant level, while the financial data are available only at the firm level. Another potential problem is a large number of sample firms (n = 108) were excluded due to the unavailability of financial data from year −2 to year 3. We conducted a t-test to compare the industry-adjusted ROA performance (at year −2) between the final sample and the dropped sample, and we found no significant difference between the two sets (t = 0.559, p = 0.577). Further studies on the potential impacts of contextual factors on other OM practices may help both academics and practitioners gain a deeper understanding of the effectiveness of these practices, such as lean manufacturing. Finally, future research on the impact of contextual factors on the efficacy of ISO 9000 certification could be conducted not only at the firm and industry levels, but also at the supply chain level. For example, the benefit of ISO 9000 certification might depend on the position of the certified firm in the supply chain.