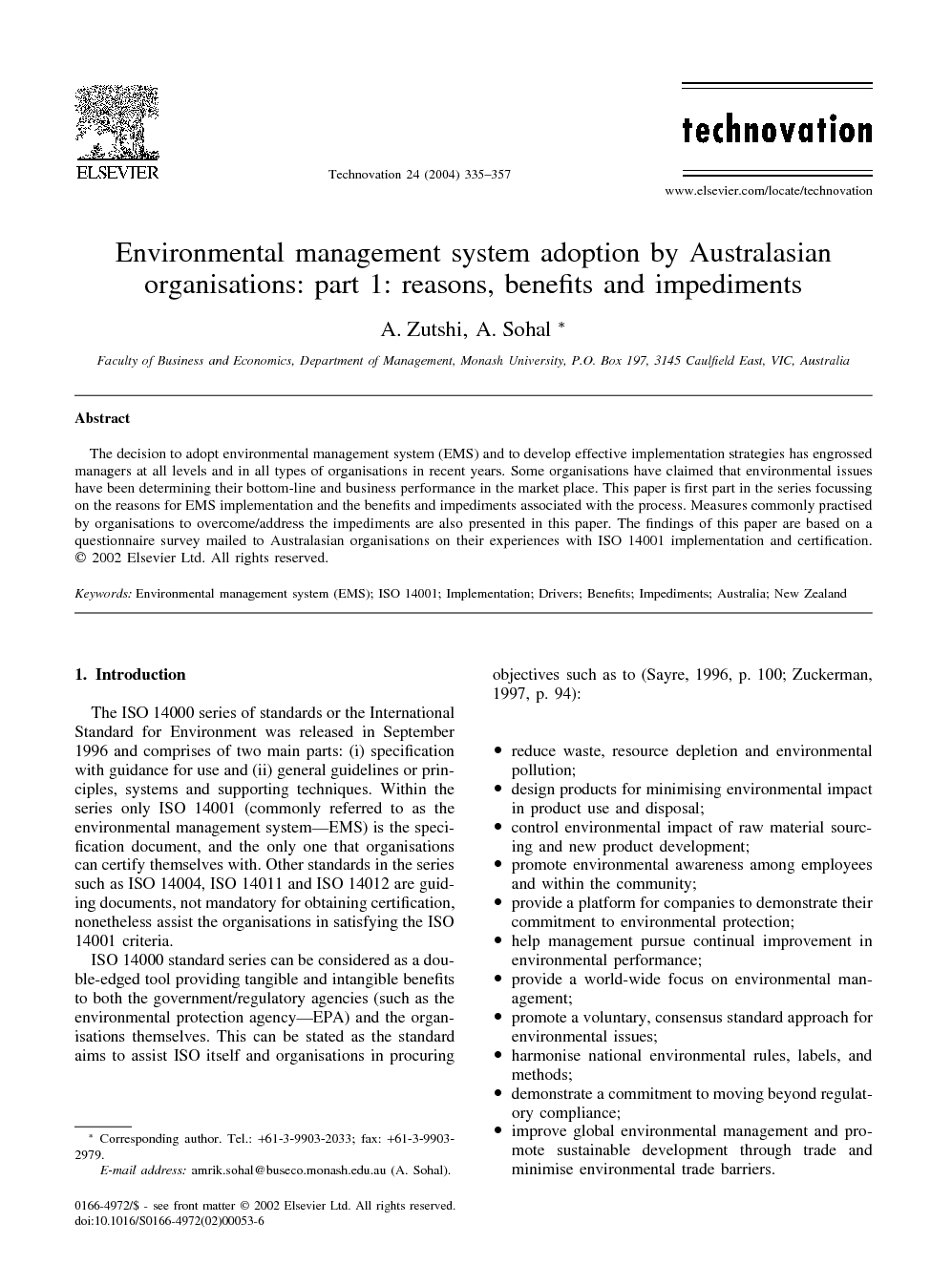 The decision to adopt environmental management system (EMS) and to develop effective implementation strategies has engrossed managers at all levels and in all types of organisations in recent years. Some organisations have claimed that environmental issues have been determining their bottom-line and business performance in the market place. This paper is first part in the series focussing on the reasons for EMS implementation and the benefits and impediments associated with the process. Measures commonly practised by organisations to overcome/address the impediments are also presented in this paper. The findings of this paper are based on a questionnaire survey mailed to Australasian organisations on their experiences with ISO 14001 implementation and certification.

The ISO 14000 series of standards or the International Standard for Environment was released in September 1996 and comprises of two main parts: (i) specification with guidance for use and (ii) general guidelines or principles, systems and supporting techniques. Within the series only ISO 14001 (commonly referred to as the environmental management system—EMS) is the specification document, and the only one that organisations can certify themselves with. Other standards in the series such as ISO 14004, ISO 14011 and ISO 14012 are guiding documents, not mandatory for obtaining certification, nonetheless assist the organisations in satisfying the ISO 14001 criteria. ISO 14000 standard series can be considered as a double-edged tool providing tangible and intangible benefits to both the government/regulatory agencies (such as the environmental protection agency—EPA) and the organisations themselves. This can be stated as the standard aims to assist ISO itself and organisations in procuring objectives such as to (Sayre, 1996 and Zuckerman, 1997): • reduce waste, resource depletion and environmental pollution; • design products for minimising environmental impact in product use and disposal; • control environmental impact of raw material sourcing and new product development; • promote environmental awareness among employees and within the community; • provide a platform for companies to demonstrate their commitment to environmental protection; • help management pursue continual improvement in environmental performance; • provide a world-wide focus on environmental management; • promote a voluntary, consensus standard approach for environmental issues; • harmonise national environmental rules, labels, and methods; • demonstrate a commitment to moving beyond regulatory compliance; • improve global environmental management and promote sustainable development through trade and minimise environmental trade barriers. The ISO 14001 standard comprises of five main elements: environmental policy, planning, implementation and operation, checking and corrective action, and management review (Fig. 1). These elements are a prerequisite for an organisation to implement an effective EMS. In views of Hammerschmid and Ulian (1998, p. 5) a fully implemented and certified EMS would effectively: • manage environmental issues worth millions of dollars; • determine the organisation’s success in maintaining the positive public and shareholder perception concerning the environment; • reduce the risk of environmental incidents occurring; • assist in demonstrating due diligence; • over the long-term, potentially reduce staff numbers by ensuring that only the right work is undertaken. In this paper we present the results of a questionnaire survey focussing on EMS/ISO14001 adoption by Australasian oganisations. More specifically we focus on the drivers, benefits and impediments of EMS adoption. This survey is part of a large research project that is examining the role of employees and suppliers, as organisational stakeholders, during the successful adoption of an EMS. Successful adoption is defined as one being faster in implementation, accompanied with fewer impediments (such as resistance from stakeholders) and with quantifiable and non-quantifiable benefits. For this project the stakeholders includes only the organisations top management, employees and suppliers. The remainder of this paper is structured as follows. The next section presents a review of the literature relating to drivers or reasons for EMS adoption, its benefits and impediments. This is followed by the section on research methodology. Next, the findings from the survey are presented and discussed. The final sections of the paper presents a summary of the survey findings.

The survey results provide an overview of the status of EMS/ISO 14001 adoption within Australasian organisations. Not pertaining to any industrial sector, the survey attempted to identify practice or trends within the organisations with respect to EMS adoption and certification. The results show that the manufacturing sector is leading the service sector in both the implementation and certification of ISO 14001. The standard itself along with the external consultants are the two main sources used by organisations for gaining information about the EMS. The least used source identified was the suppliers. It was surprising to find that none of the organisations learnt about the EMS from the media, a source, which is the first one to report environmental accidents and disasters. This reflects that media needs to become more proactive in its approach towards communicating the message of becoming environmentally friendly and green. It thus needs to form strategic alliances with industry association or organisations themselves in both educating them on environmental issues and further communicating possible solutions identified from other parts of the world. The results also found that organisations generally preferred to obtain third-party certification with the standard(s) than to simply implement these. This preference could be attributed to the perceived stakeholder benefits. From the organisations’ viewpoint, EMS related tangible and intangible benefits could only be achieved by obtaining certification by a third party. Nonetheless the literature also shows that some organisations believe that the costs of certification outweighed its benefits and hence only their implementation is suffix. Also, especially in the case of the SMEs, the resources (time, human, dollars) required for maintenance and periodic auditing of systems was found to be much higher than the benefits achieved from certification and thus, organisations only prefer to implement the systems. Responses from the survey also showed that as the plans, programs and changes were being implemented the responsibility of overseeing the processes and operations took a bottom–up approach, with the employees dominating the process. The external sources in many instances also assisted the organisations in identifying the improvement areas. The reasons for this is unclear, however can be due to the ‘outside/fresh’ outlook which the external sources can provide. Not being a part of the organisation, the external sources, for example the consultants, are able to holistically look at the organisation’s system and discuss their findings both from the ‘adviser’ and ‘devils advocate’ perspective, depending on the nature of the task that they are hired for. However middle managers and in many instances the top managers of the organisation had the responsibility of reviewing the internal audit results and progress of the various programs being implemented. This could be attributed to the growing penalties in case of an accident, both to the organisations, its top management and the individual responsible. Another reason could be that top management’s commitment, leadership, vision and motivation is required to successfully implement and maintain any system, including the EMS. ‘Improving corporate image’, or being seen as a good corporate citizen is the main reason why EMS is implemented by organisations. However, making improvements to internal processes and complying with regulatory requirements are also significant drivers for many organisations to implement EMS. Reduction/removal of ‘international trade barriers’ and ‘pressure from suppliers’ were not identified as important reasons for EMS adoption. Achievement of benefits from EMS implementation could lead to improved reputation for the organisation, resulting in increased market share; thus directly relating to the main reason for EMS adoption. ‘Leniency in international trade barriers’ and ‘decrease in insurance costs’ were the two benefits least expected and achieved by the respondents. As evident from the findings, most of the impediments when implementing EMS were associated with spending of dollars on updating or changing systems, training, auditors fees, etc. ‘Resistance from suppliers due to lack of information regarding EMS’ and ‘disclosure of confidential information to a third party’ were the two impediments least expected and experienced by the respondents. Training and communication are the two methods generally practiced by the organisations to address the impediments encountered during the EMS implementation. These methods were similarly used in case of both the employees and suppliers. The findings can be briefly summarised in the following points: • The majority of the organisations having EMS in place had used the ISO 14000 standard itself to gain information about EMS. • Employees and in-house consultants are the main source for identifying potential improvement areas. • The main reason for EMS adoption was to obtain an improved corporate image. • Compliance to legislation and reduction in organisational risks (health, safety and environmental) were the two main benefits expected and achieved by organisations. • One of the major impediments associated with ISO 14001 was the high dollar costs associated with actual implementation and external auditors fees.