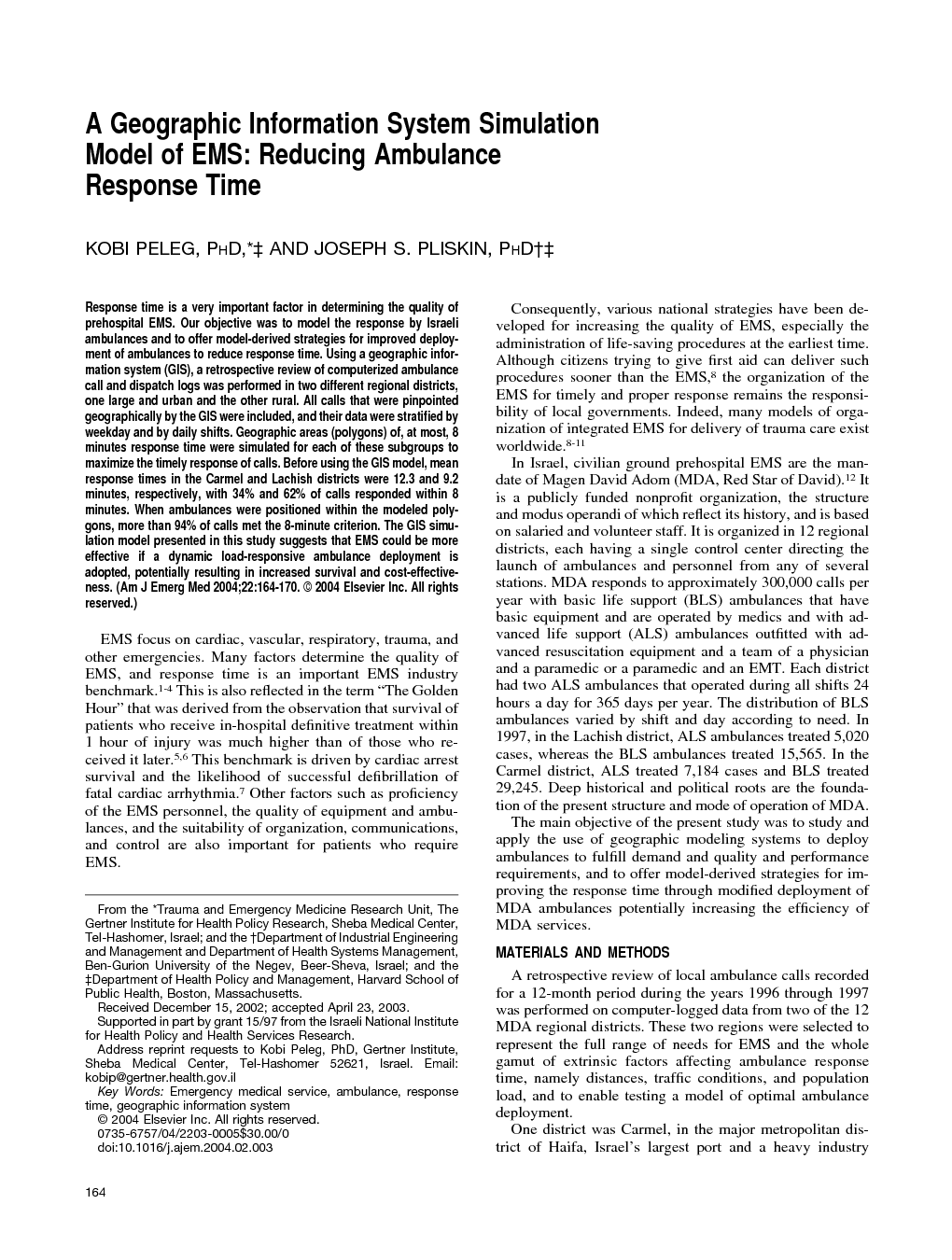 Response time is a very important factor in determining the quality of prehospital EMS. Our objective was to model the response by Israeli ambulances and to offer model-derived strategies for improved deployment of ambulances to reduce response time. Using a geographic information system (GIS), a retrospective review of computerized ambulance call and dispatch logs was performed in two different regional districts, one large and urban and the other rural. All calls that were pinpointed geographically by the GIS were included, and their data were stratified by weekday and by daily shifts. Geographic areas (polygons) of, at most, 8 minutes response time were simulated for each of these subgroups to maximize the timely response of calls. Before using the GIS model, mean response times in the Carmel and Lachish districts were 12.3 and 9.2 minutes, respectively, with 34% and 62% of calls responded within 8 minutes. When ambulances were positioned within the modeled polygons, more than 94% of calls met the 8-minute criterion. The GIS simulation model presented in this study suggests that EMS could be more effective if a dynamic load-responsive ambulance deployment is adopted, potentially resulting in increased survival and cost-effectiveness.

The simulation model that was constructed and presented in this study suggests that EMS could become more effective if a dynamic, load-responsive ambulance deployment model is adopted. This model can be tailored for any district and EMS system in which call data are available for retrospective analysis. The response time is critical for the patient’s survival and reduction of disability, and many have shown a direct relationship between prehospital medical treatment or resuscitation1, 2, 3, 4, 5 and 6 and survival.8 and 13 A rapid response time is also reflected in an overall shorter turnaround time for ambulances, thus increasing their availability for additional calls. The simulation model also resulted in a significant (alas, only theoretical) savings of resources in personnel hours, ambulances, and equipment in each of the districts, permitting more cost-effective organization of the EMS services. This is reflected in the reduced number of ambulances and personnel assigned to different shifts and the improved organization of working shifts (manuscript in preparation). System savings from the implementation of a geographic positioning system (GPS) have been demonstrated elsewhere.14 However, this does not necessarily carry over to the present analysis, which relates to planning of services, whereas GPS relates to operational, dynamic aspects of providing service. Presently, ambulances are dispatched from a few fixed stations, but the simulation model suggests that additional EMS posts should be established within the territory contained in the polygons. This arrangement could perhaps also reduce the activation time spent between transmission of the call to the EMS team and their actual departure. The preferred alternative would be for the EMS crew to stay in the ambulance during the entire shift, except for patient care. We must remember that the data reflect the situation in 1996 through 1997. Today, ambulances are equipped with location technology. However, to be effectively used, location and allocation have to be carefully planned. In our analysis, travel from one district to another is not relevant because the two districts are geographically remote from one another. Ambulances can, however, travel outside their designated polygon. One must remember that polygon construction was based on existing call patterns. If an ambulance travels beyond the limits of its polygon, there is a probability of momentary shortage of ambulances to respond to calls and ambulances from adjacent polygons might have to respond. Although this model has dealt only with surface EMS services, the incorporation of airborne EMS teams for areas not covered by the polygons should be considered, especially in distant regions where the “Golden Hour” cannot be attained. There are many other factors that contribute to the quality of EMS that might be added to any comprehensive model for the refinement of policies on EMS. They could include analysis of the training levels required of ambulance teams, the ratio of ALS units to regular BLS ambulances, the equipment carried by either, the organization of the EMS under national or regional hierarchy,15 the public nature of these services, and more. We must be aware of some of the limitations of our study. The conclusions are based on the results of the model, but its functionality has not been demonstrated. Implementation could encounter political and operational problems that cannot be dealt with in a formal model. Sensitivity analyses were not performed on all parameters (eg, travel speeds); the extrapolation to the full call volume might not be appropriate. The model must be updated at regular intervals to account for changes in travel times and speeds as a result of changing urban and rural environments, changes in road directions, expansion of lanes in roads, and so on. Operational issues relating to frequent repositioning of ambulances and varying the on-duty personnel were not addressed in this study. In conclusion, a suitable model based on retrospective EMS data can help to potentially improve these essential services and result in higher survival rates and reduced disability of their clients.