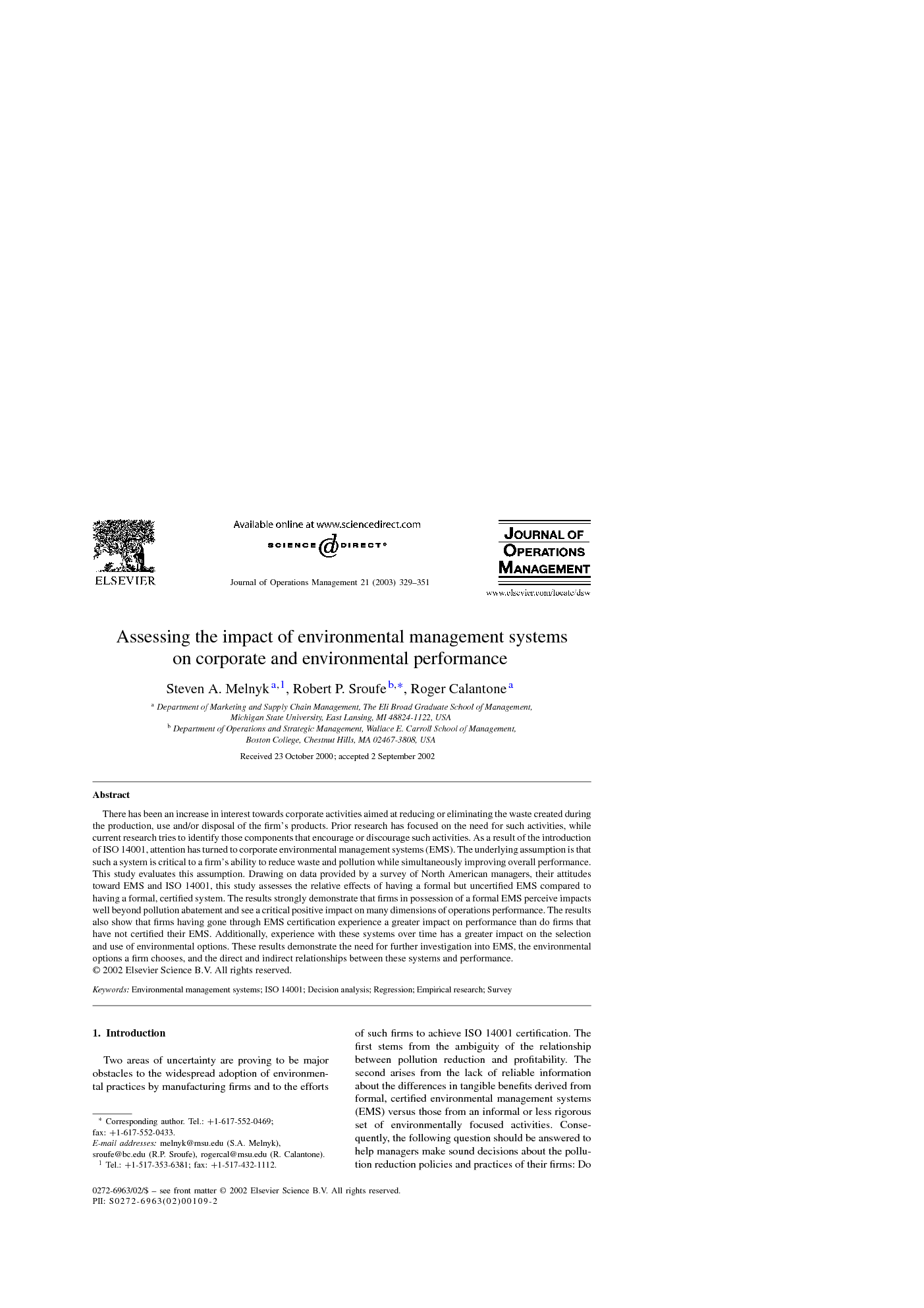 There has been an increase in interest towards corporate activities aimed at reducing or eliminating the waste created during the production, use and/or disposal of the firm’s products. Prior research has focused on the need for such activities, while current research tries to identify those components that encourage or discourage such activities. As a result of the introduction of ISO 14001, attention has turned to corporate environmental management systems (EMS). The underlying assumption is that such a system is critical to a firm’s ability to reduce waste and pollution while simultaneously improving overall performance. This study evaluates this assumption. Drawing on data provided by a survey of North American managers, their attitudes toward EMS and ISO 14001, this study assesses the relative effects of having a formal but uncertified EMS compared to having a formal, certified system. The results strongly demonstrate that firms in possession of a formal EMS perceive impacts well beyond pollution abatement and see a critical positive impact on many dimensions of operations performance. The results also show that firms having gone through EMS certification experience a greater impact on performance than do firms that have not certified their EMS. Additionally, experience with these systems over time has a greater impact on the selection and use of environmental options. These results demonstrate the need for further investigation into EMS, the environmental options a firm chooses, and the direct and indirect relationships between these systems and performance.

Two areas of uncertainty are proving to be major obstacles to the widespread adoption of environmental practices by manufacturing firms and to the efforts of such firms to achieve ISO 14001 certification. The first stems from the ambiguity of the relationship between pollution reduction and profitability. The second arises from the lack of reliable information about the differences in tangible benefits derived from formal, certified environmental management systems (EMS) versus those from an informal or less rigorous set of environmentally focused activities. Consequently, the following question should be answered to help managers make sound decisions about the pollution reduction policies and practices of their firms: Do efforts aimed at reducing pollution impact operations performance and, if so, then does it matter whether the efforts meet ISO 14001 certification standards? The purpose of this study is to answer this pressing question. A decade ago, there was virtually no debate in scholarly or manufacturing circles over the relationship between environmental practices and corporate performance. It was simply taken as a fact that pursuing environmental goals was antithetical to sound business strategy and, quite possible, a violation of the fiduciary duty of managers to shareholders. Conventional wisdom, in fact, held that any investment in improved environmental performance would contribute to penalties such as increased lead times, reduced quality or increased costs—all of which reduced profits and decreased returns to stockholders. In 1991, however, Porter challenged these entrenched beliefs and sparked a debate, which not only increased theoretical and practical interest in the possibility that profitability and pollution reduction were not mutually exclusive goals but, ultimately, brought about a dramatic shift in manufacturers’ attitudes toward environmental responsibility (Porter, 1991). According to Porter, pollution was simply waste, regardless of its source, which diminished value and was symptomatic of problems in products and/or processes. Therefore, contrary to received opinion, reducing or eliminating pollution/waste would not weaken but strengthen corporate competitiveness. Tradition dies hard, however, and Porter engendered criticism (Walley and Whitehead, 1994 and Jaffee et al., 1993) as well as supportive efforts to expand upon his original position (Porter and Van der Linde, 1995a and Porter and Van der Linde, 1995b and several others (Bonifant and Ratcliff, 1994, Curkovic et al., 2000, Klassen and McLaughlin, 1996, Rothenberg et al., 2001, Montabon et al., 2000 and Tibor and Feldman, 1996). In short, the debate continues, but not without positive effect. In the last 10 years, a radical change has come about in management’s views on pollution, the need for pollution reduction and better environmental management. While the bastions of conventional thinking remain, they are decreasing in number, persuasiveness and political clout. Into this continued questioning of the fundamental relationship between dollars and diminution of environmental destruction comes a new and virtually unresearched variable: ISO 14001 certification. In 1996, the ISO 14001 certification standards for environmental performance were adopted, with their acceptance predicated on the promise of certain benefits. First, ISO 14001 was argued to be the next logical step forward given the successes of the quality standard ISO 9000 and its automotive industry variant QS 9000 (Miles and Russel, 1997, Block, 1999, Caillibot, 1999, Reid, 1999 and Corbett and Kirsch, 2001). Second, ISO 14001 was promoted as the standard that would replace the numerous and often conflicting sets of criteria found in various countries. Third, this new standard did not focus on outcomes such as reduced pollution. Instead, the focus of the standard is on the processes involved in the creation, management, and elimination of pollution. Basically, ISO 14001 was set forth as an effective tool to guide managers in their efforts to capitalize on the cost reduction potential of waste reduction (BSI, 1996). Fourth, supporters’ lauded ISO 14001’s stress on the crucial role played by an EMS in overall corporate performance (Sayre, 1996, Tibor and Feldman, 1996 and Corbett and Kirsch, 2001). The impact on corporate performance is said to be an advantage of implementing a formal, certified environmental management system over those of pursuing a less stringent package of pollution-sensitive activities. This study assesses the impact of three types of EMS: (1) an informal system; (2) a formal system that does not meet ISO 1400 standards; and (3) a formal system that does meet ISO 14001 standards. Since ISO 14001 has been in effect for 5 years, over 250,000 firms have been certified internationally (ISO World, 2000 and ISO, 1999). The rate of certification is growing at least 50,000 per year (Corbett and Kirsch, 2001) and we even see large multinational Original Equipment Manufacturers (OEM) demanding certification of their supply base (Anonymous, 1999). Opportunities for research are now apparent through addressing the following questions: has ISO 14001 lived up to the promises made on its behalf and to those promises made on behalf of the adoption of a formal certified EMS? Until this study, little systematic research has been devoted to finding the answers to these questions. Other research questions involve the extent to which pollution reduction contributes to operations performance and the need to understand impacts of a formal, certified environmental management system, this study addresses three basic questions: 1. How does the presence or absence of a formal EMS affect both operations performance and environmental options? 2. Does a firm derive tangible benefits from having a formal, certified environmental management system? 3. What is the magnitude of the impact of (a) having a formal EMS and (b) having a formal and certified EMS? These questions will be examined using a multimethod research perspective (Brewer and Hunter, 1989). Regression analysis of a survey database sheds light on EMS while simultaneously examining several posited relationships between formal EMSs and operations performance variables such as cost lead time, quality, flexibility, and enhanced reputation. This paper is organized into four major sections: the first section establishes the concept of ISO 14001 and the EMS certification standard it sets forth. This discussion lays the groundwork for developing the concept of the EMS and its importance to the firm. The second section develops the operational framework for this study, while the third section summarizes the basic research design and statistical methodology used. To conclude, the fourth section presents the major findings and discusses the theoretical and research implications of the study before identifying directions for future research.

After assessing non-normality and departures from some of the assumptions of regression analysis, 26 full factorial univariate ANOVAs were run. Since they are essentially preparatory, the results of these runs are not reported in detail. The performance variable results are summarized in Table 3, while environmental options results summarized in Appendix B. In all cases, the models were significant (as denoted by the F-statistic) and, with the exception of two instances (both observed for the options-oriented models), the higher order interactions were not significant. With no theoretical support for including the two interactions, it was decided to include only main effects in the resulting regression equations for the fourth stage of analysis. To test for omitted variable bias of the model, all regressions were tested using the Ramsey regression specification test for omitted variables ( Ramsey, 1969 and Ramsey and Schmidt, 1976). The regression specification error identified no problems with the models used in this study. The use of a main effects regression model simplifies the interpretation of the resulting findings, especially as they pertain to the β weights, since these can now be viewed as capturing the incremental effects of the each independent variable on the resulting dependent variables. For each of the regression equations, the independent variables were coded as dummy variables. The intercept was treated as the base case. This case consisted of the following conditions: • no formal EMS; • first quartile sales; • privately held. The result is that the independent variables were represented by six dummy variables, one continuous variable, as well as the intercept. The resulting regression models involve An additional variable was used to test for a significant difference between having a formal EMS and a formal certified EMS. This variable EMS2–EMS3 is also included in the results in Table 4. The results of the regression analyses involving performance are summarized in Table 4. The results of the regression analysis for environmental options are summarized in Appendix C. We will first examine and discuss the results of the corporate performance variables. A summary of the significant findings by independent variables for these two categories of dependent variables is presented in Table 5.