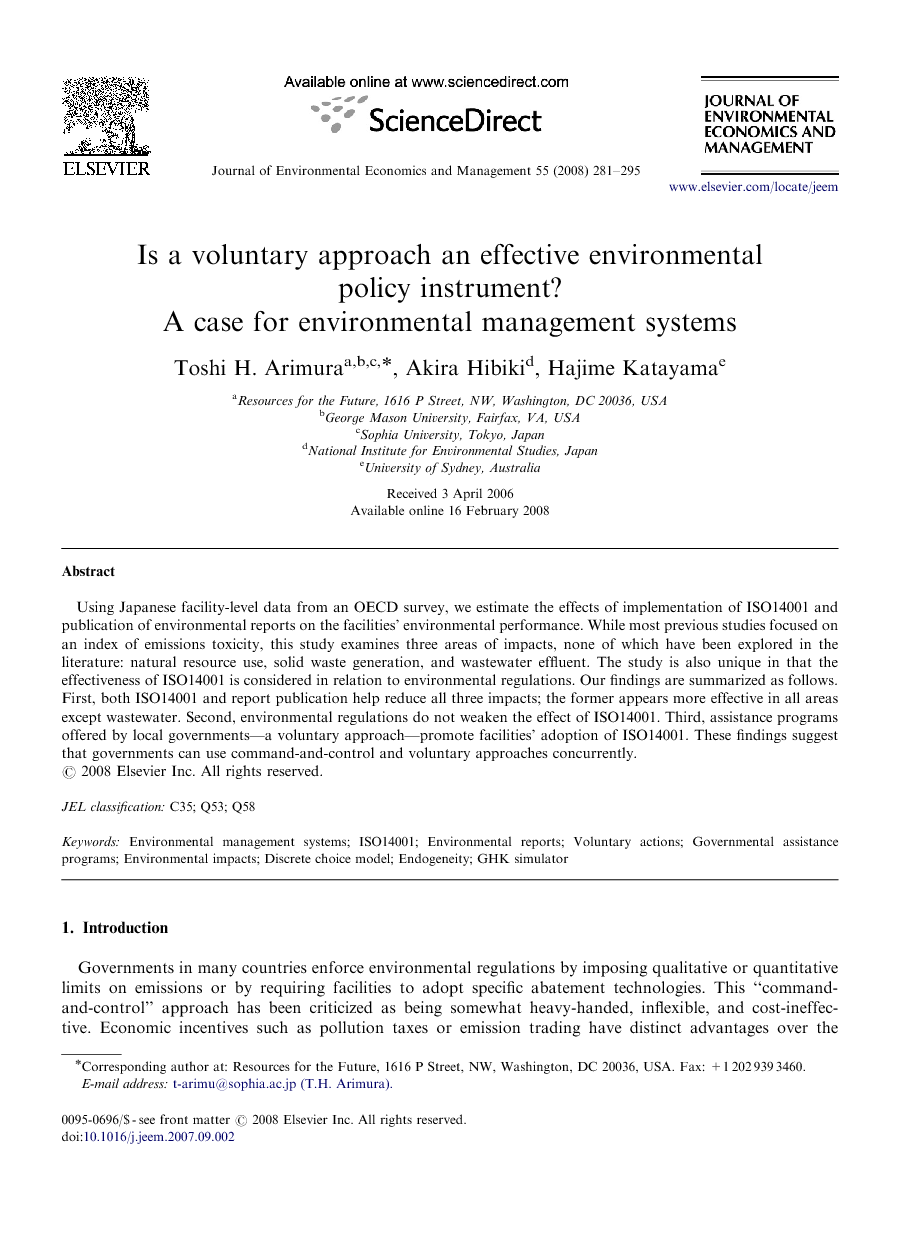 Using Japanese facility-level data from an OECD survey, we estimate the effects of implementation of ISO14001 and publication of environmental reports on the facilities’ environmental performance. While most previous studies focused on an index of emissions toxicity, this study examines three areas of impacts, none of which have been explored in the literature: natural resource use, solid waste generation, and wastewater effluent. The study is also unique in that the effectiveness of ISO14001 is considered in relation to environmental regulations. Our findings are summarized as follows. First, both ISO14001 and report publication help reduce all three impacts; the former appears more effective in all areas except wastewater. Second, environmental regulations do not weaken the effect of ISO14001. Third, assistance programs offered by local governments—a voluntary approach—promote facilities’ adoption of ISO14001. These findings suggest that governments can use command-and-control and voluntary approaches concurrently.

Governments in many countries enforce environmental regulations by imposing qualitative or quantitative limits on emissions or by requiring facilities to adopt specific abatement technologies. This “command-and-control” approach has been criticized as being somewhat heavy-handed, inflexible, and cost-ineffective. Economic incentives such as pollution taxes or emission trading have distinct advantages over the command-and-control approach in terms of their cost-effectiveness. Because of opposition from manufacturing sectors and industry associations, however, their introduction has been politically fraught and difficult to achieve. In the face of limitations to government regulations and economic incentives, policymakers have attempted to encourage facilities to take voluntary action. The voluntary approach is recognized as being more flexible, effective, and less costly than the traditional approaches. Recently, a variety of voluntary environmental actions are adopted at the “facility1” level. One voluntary action is for facilities2 to introduce an environmental management system (EMS).3 Typically, the EMS consists of policymaking, planning, and implementation and review of the environmental policies, all of which are intended to help facilities reduce the environmental impacts of their operations. Certified EMSs such as the ISO14001 standard and the EU Eco-Management and Audit Scheme (EMAS) are routinely practiced, especially in the automobile industry. Since 1996, major US and Japanese auto manufacturers, including Ford, General Motors, and Toyota, have implemented certified EMSs and require their suppliers to do the same. European carmakers such as Daimler-Benz and Volvo demand that their suppliers demonstrate certifiable implementation of an EMS. The trend now goes beyond the automobile industry. For example, major high-tech and computer companies such as Hewlett-Packard and Motorola expect suppliers to have achieved ISO14001 registration. In response to the rapid growth in the number of EMS-certified facilities, researchers have turned their attention to what determines the adoption of certified EMS and its effectiveness on environmental performance. For example, using data on Japanese manufacturing firms, Nakamura et al. [18] showed that the adoption of ISO14001 is influenced by firm size, the average age of firm employees, export ratio, and debt ratio. Darnall [7] provided evidence that an early uptake of ISO14001 is due to greater regulatory pressure. Examining German manufacturing facilities, Ziegler and Rennings [26] found that facilities implement certified EMS to enhance their corporate image. Past studies are not necessarily in agreement on the effectiveness of certified EMS.4 Potoski and Prakash [19] and Russo [21] provided evidence that ISO14001 helps US firms reduce their environmental impacts. On the other hand, Ziegler and Rennings [26] found that EMS certification does not significantly affect environmental innovation and abatement behavior at German manufacturing facilities. Using UK data, Dahlström et al. [6] showed that neither ISO14001 nor EMAS has a positive effect on compliance with environmental regulations.5 Besides EMS, publicly available environmental reporting is another important voluntary action. Reports inform investors and consumers about the facility's products and environmental performance and thus may motivate the facility to decrease its environmental impacts or develop innovative approaches to reducing emissions. Publication of reports has not been examined in past studies as thoroughly as EMS. One of the very few studies that dealt with report publication is Anton et al. [2], but they focused on the effect of comprehensive environmental practices, not on the effect of report publication per se. Comprehensiveness was measured as the number of environmental practices adopted by the facility, one of which was report publication. Therefore, the effect of reports was assumed to be equal to that of any other practice that a facility adopted. This paper looks at the two major voluntary actions described above—implementation of a certified EMS, specifically ISO14001, and publication of environmental reports. Using Japanese facility-level data from a survey conducted by the Organisation for Economic Co-operation and Development (OECD), we estimate the effects of these voluntary actions on the following areas of environmental impact: (1) use of natural resources (i.e., fuel and water), (2) solid waste generation, and (3) wastewater effluent. These three areas are unexplored in the literature, since past studies focused on single performance measures, like an index of the emissions’ toxicity [19] and [21]. The current study is also unique in that it deals with more than one voluntary action. In past studies, the effect of ISO14001 was examined in isolation from other voluntary actions. This could lead to overestimates of its effect. In this study, we will show that overestimation indeed occurs; the effect of ISO14001 becomes larger when the other voluntary action (i.e., publication of reports) is not controlled for. We also examine whether the adoption of ISO14001 is influenced by assistance programs—a type of voluntary approach by local governments. The effectiveness of the governments’ voluntary approach is further considered in relation to existing environmental regulations. In particular, we examine whether environmental regulations are detrimental to the effect of ISO14001, thereby addressing the relevance for governments to use both command-and-control and a voluntary approach. Thus, this study represents a new perspective.

This study has examined the effects of two voluntary environmental actions on natural resource use, solid waste generation, and wasteful water. While we found that both ISO14001 adoption and report publication are effective in reducing all three impacts, ISO14001 is more effective than report publication for all impacts except wastewater. It should be stressed that both ISO14001 and reports reduce the environmental impacts over time. This is probably because the nature of these actions gives facilities incentives to make long-term efforts for better performance. In contrast, under a command-and-control approach, facilities are unlikely to make constant improvement unless regulations are modified and made stricter year after year. ISO14001 has been promoted by governments via an assistance program, and we found that the promotion was effective. However, the effectiveness of the voluntary approach needs to be considered in relation to regulations. Under regulations, facilities may simply comply with the target level even if they could further improve with ISO14001. On this matter, we showed that regulations do not significantly weaken the effect of ISO14001. This finding confirms the relevance of concurrent use of traditional policy instruments and the voluntary approach. The results reported here should nonetheless be taken with caution due to the inherent problems in survey data, namely, the existence of non-respondents, missing data among respondents, and the use of self-reported measures of the outcomes. The reader may thus reserve “final” judgment until perhaps other data sets in the future are able to confirm our results. Finally, from the viewpoint of social welfare, we should not hurry a conclusion that the promotion of ISO14001 is desirable. It is possible that the cost of ISO14001 is greater than the benefit of reduction in environmental impacts. Although this is an important question to consider, the nature of our data unfortunately made it impossible to scrutinize this issue. Detailed cost-benefit analysis is essential before we conclude that ISO14001 is socially desirable.