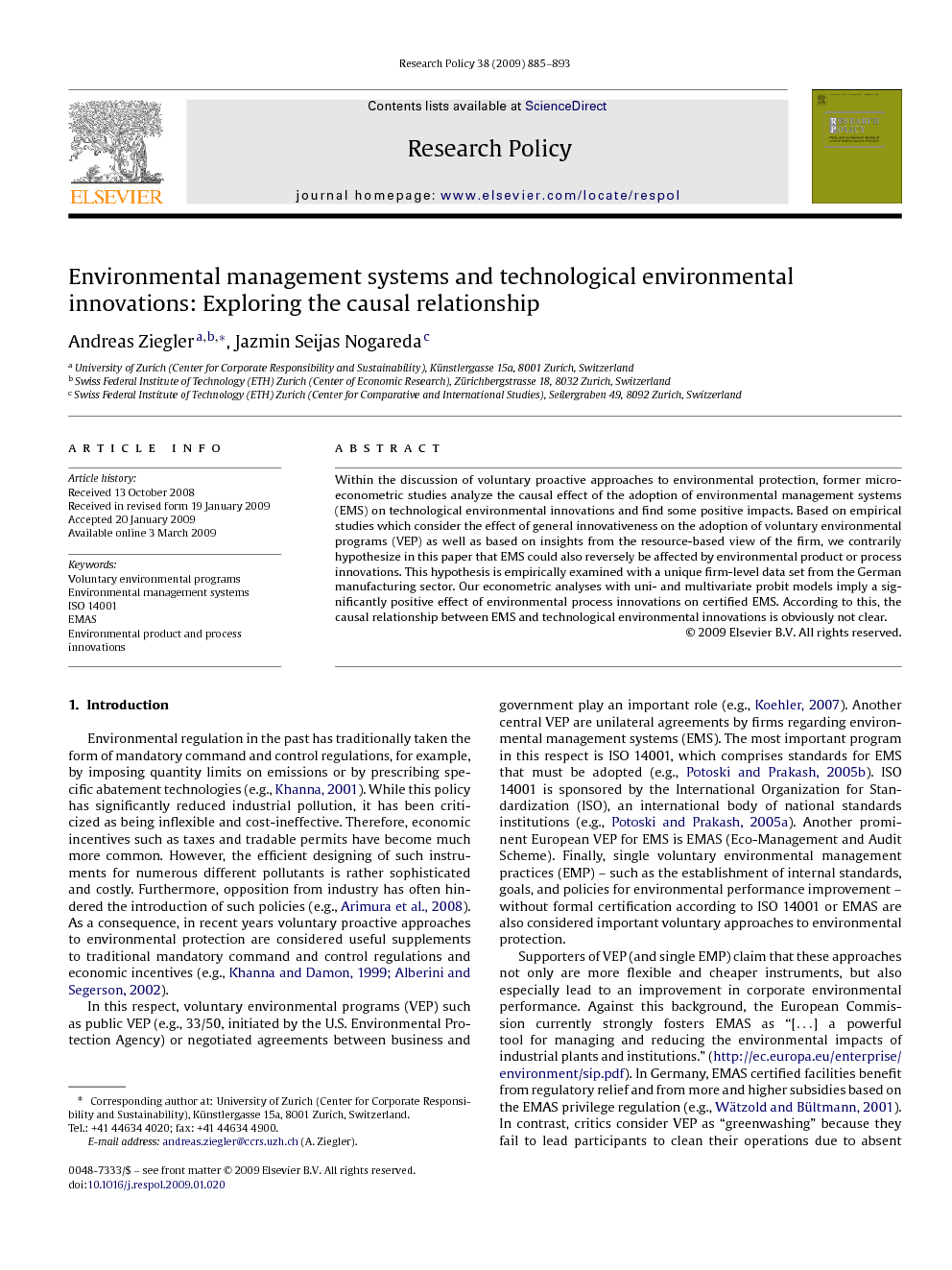 Environmental regulation in the past has traditionally taken the form of mandatory command and control regulations, for example, by imposing quantity limits on emissions or by prescribing specific abatement technologies (e.g., Khanna, 2001). While this policy has significantly reduced industrial pollution, it has been criticized as being inflexible and cost-ineffective. Therefore, economic incentives such as taxes and tradable permits have become much more common. However, the efficient designing of such instruments for numerous different pollutants is rather sophisticated and costly. Furthermore, opposition from industry has often hindered the introduction of such policies (e.g., Arimura et al., 2008). As a consequence, in recent years voluntary proactive approaches to environmental protection are considered useful supplements to traditional mandatory command and control regulations and economic incentives (e.g., Khanna and Damon, 1999 and Alberini and Segerson, 2002). In this respect, voluntary environmental programs (VEP) such as public VEP (e.g., 33/50, initiated by the U.S. Environmental Protection Agency) or negotiated agreements between business and government play an important role (e.g., Koehler, 2007). Another central VEP are unilateral agreements by firms regarding environmental management systems (EMS). The most important program in this respect is ISO 14001, which comprises standards for EMS that must be adopted (e.g., Potoski and Prakash, 2005b). ISO 14001 is sponsored by the International Organization for Standardization (ISO), an international body of national standards institutions (e.g., Potoski and Prakash, 2005a). Another prominent European VEP for EMS is EMAS (Eco-Management and Audit Scheme). Finally, single voluntary environmental management practices (EMP) – such as the establishment of internal standards, goals, and policies for environmental performance improvement – without formal certification according to ISO 14001 or EMAS are also considered important voluntary approaches to environmental protection. Supporters of VEP (and single EMP) claim that these approaches not only are more flexible and cheaper instruments, but also especially lead to an improvement in corporate environmental performance. Against this background, the European Commission currently strongly fosters EMAS as “[…] a powerful tool for managing and reducing the environmental impacts of industrial plants and institutions.” (http://ec.europa.eu/enterprise/environment/sip.pdf). In Germany, EMAS certified facilities benefit from regulatory relief and from more and higher subsidies based on the EMAS privilege regulation (e.g., Wätzold and Bültmann, 2001). In contrast, critics consider VEP as “greenwashing” because they fail to lead participants to clean their operations due to absent significant obligations or enforcements (e.g., Potoski and Prakash, 2005a). As a consequence, former micro-econometric studies analyze the causal effect of VEP and single EMP on corporate environmental performance (e.g., Dasgupta et al., 2000 and Vidovic and Khanna, 2007). Other studies consider their effect on technological environmental innovations (e.g., Wagner, 2007) as a specific measure for environmental performance. Such environmental product and process innovations are clearly more complex indicators for environmental performance than restricted one-dimensional measures such as toxic emissions (e.g., Vidovic and Khanna, 2007) or the compliance with environmental regulations (e.g., Dasgupta et al., 2000). In particular, they receive increasing attention from policy makers and academics because they do not only produce spillovers of innovations, but additionally limit environmental burden and therefore lead to further positive externalities. While empirical evidence regarding the effect of VEP or single EMP on corporate environmental performance is overall mixed (e.g., Vidovic and Khanna, 2007, report insignificant effects of the participation in 33/50), it appears that certifications according to ISO 14001 have positive impacts, at least more positive impacts than the adoption of other VEP (e.g., Darnall and Sides, 2008). As a consequence, Arimura et al. (2008), for example, conclude that corresponding promotions of ISO 14001 by governments are effective with respect to environmental protection. The support of ISO 14001 can be strengthened by studies which show that its adoption has some specific positive effects on technological environmental innovations (e.g., Ziegler and Rennings, 2004). Based on empirical studies that consider the effect of general corporate innovativeness on the adoption of VEP as well as based on insights from the resource-based view of the firm, however, we contrarily hypothesize that the adoption of VEP such as ISO 14001 or EMAS could also be reversely affected by environmental product and process innovations. According to this, firms which already realized such specific innovations in the past, for example, due to market or competition factors are more likely to possess environmental capabilities in having overcome management barriers such as the lack of finance or know-how at least once before. To test this hypothesis, we apply a unique firm-level data set from the German manufacturing sector (which is already used in the aforementioned study of Ziegler and Rennings, 2004). Our econometric analysis with uni- and multivariate probit models finds a significantly positive effect of environmental process innovations on the certification of EMS. According to this, a positive correlation seems to exist at least to some extent, but the causal relationship between the adoption of ISO 14001 or EMAS and technological environmental innovations is obviously ambiguous. However, even the occurring positive correlation can be challenged since theoretically the resource-based view of the firm also implies that unobserved intangible corporate environmental capabilities could simultaneously influence both environmental activities. As a consequence, the respective parameter estimates could be biased and inconsistent due to omitted unobserved firm heterogeneity (as a specific type of omitted explanatory variables) and therefore due to endogeneity problems. We conclude that panel data over several years – which are not available for technological environmental innovations yet – are needed in the future to perform robust econometric analyses since these data, unlike cross-sectional data, are able to control for unobserved firm characteristics. Such panel data studies will be a more appropriate basis for robust conclusions regarding voluntary proactive approaches to environmental protection for environmental policy. This paper is structured as follows: in Section 2, we discuss the conceptual approach of the relationship between ISO 14001 and EMAS as specific VEP and technological environmental innovations. Section 3 reviews the empirical literature on the adoption of VEP or single EMP and corporate environmental performance. Section 4 explains the data, the variables, and the approach for our econometric analysis. In Section 5, we present the results and the final section discusses our new findings together with former estimation results and draws some conclusions.