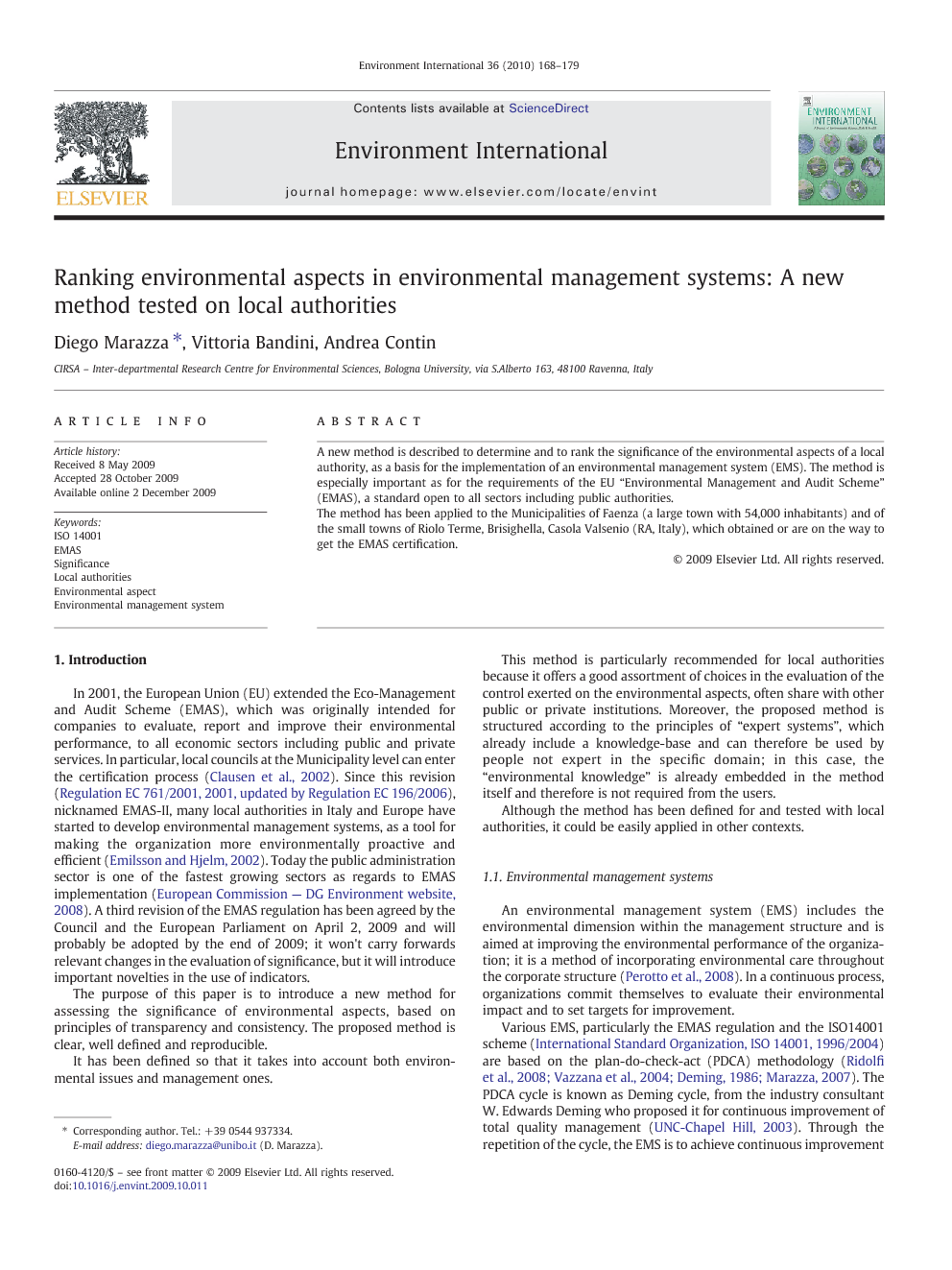 A new method is described to determine and to rank the significance of the environmental aspects of a local authority, as a basis for the implementation of an environmental management system (EMS). The method is especially important as for the requirements of the EU “Environmental Management and Audit Scheme” (EMAS), a standard open to all sectors including public authorities. The method has been applied to the Municipalities of Faenza (a large town with 54,000 inhabitants) and of the small towns of Riolo Terme, Brisighella, Casola Valsenio (RA, Italy), which obtained or are on the way to get the EMAS certification.

The measurement of the environmental significance in a EMS entails a review of the environmental problems connected to the management conditions. The application of the proposed method results in an ordered list of environmental priorities, which is obtained considering both the management and the environmental importance of the aspects. A high significance resulting from this analysis does not express a negative evaluation; on the contrary, it indicates an aspect which could be greatly improved by a change in the environmental policy of the organization. The assessment of the significance of an aspect could be summed up by a Boolean expression: a full competency AND a totally unfitting strategy AND a serious environmental problem give the maximum of significance; a null competency OR a total fitting strategy gives a null significance. The efficacy of an EMS implemented by a local authority should be evaluated by the decrease in the number of high significance environmental aspects. This can be proposed as one indicator of the efficacy of the EMS, and according to Commission recommendation 2003/532/EC (2003) it can be classified as a “Management Performance Indicator — MPI”. In particular, the EMS should be implemented keeping a “zero G principle” in mind: a high number of “zero G” cases indicate an effective internal organizational structure capable of planning, executing, checking and reviewing a defined environmental strategy. It also indicates high knowledge content in the organization and trained personnel. In one sense, the “zero G principle” is the driving force towards continuous improvement of the administration in the EMAS scheme. This paper refers in particular to local authorities, the government level closest to the citizen, whose participation in EMS implementation throughout Europe has a positive influence on the environmental habits of the general public and can contribute to the implementation of the principles of sustainable development at local level.