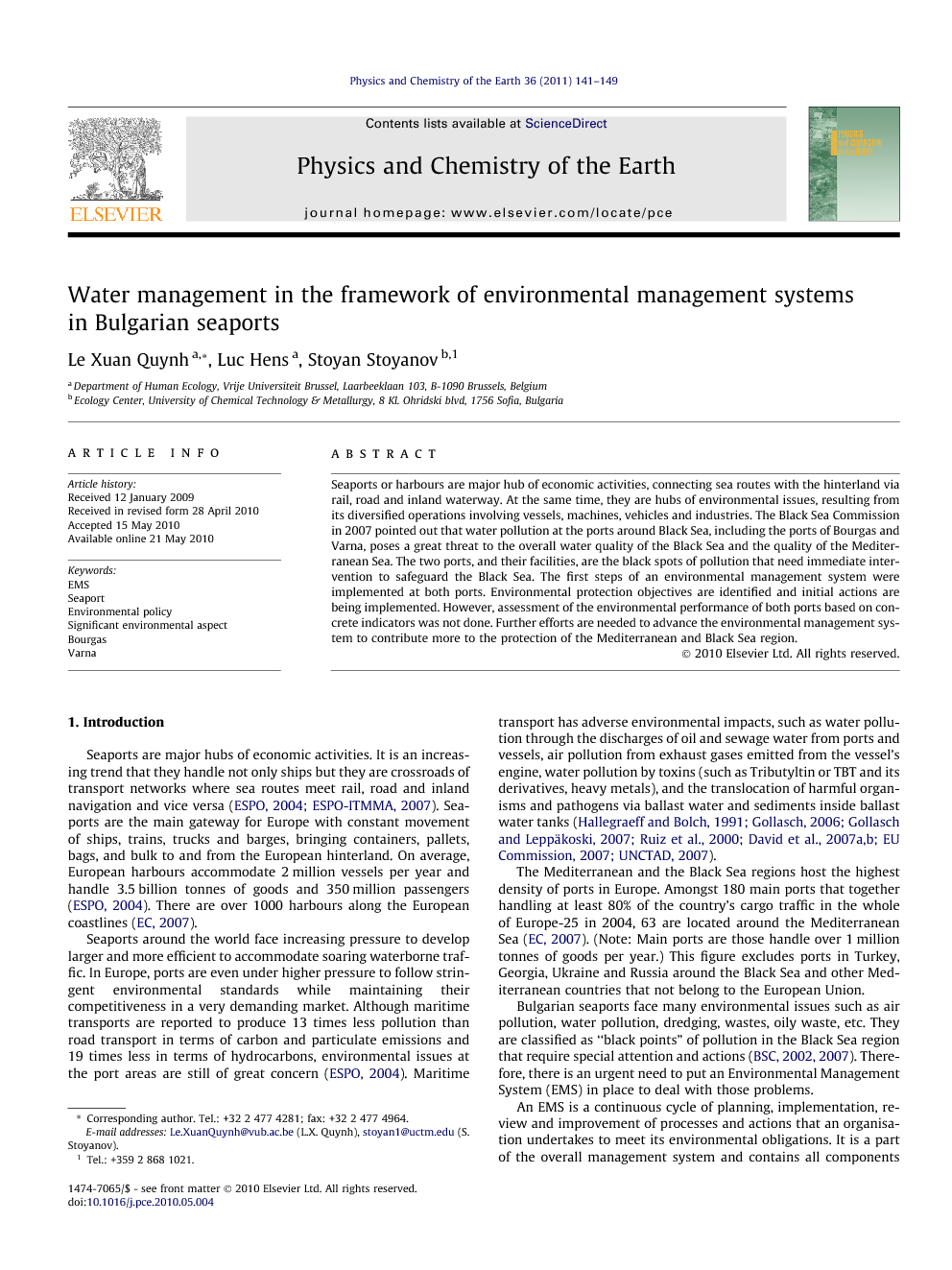 Seaports or harbours are major hub of economic activities, connecting sea routes with the hinterland via rail, road and inland waterway. At the same time, they are hubs of environmental issues, resulting from its diversified operations involving vessels, machines, vehicles and industries. The Black Sea Commission in 2007 pointed out that water pollution at the ports around Black Sea, including the ports of Bourgas and Varna, poses a great threat to the overall water quality of the Black Sea and the quality of the Mediterranean Sea. The two ports, and their facilities, are the black spots of pollution that need immediate intervention to safeguard the Black Sea. The first steps of an environmental management system were implemented at both ports. Environmental protection objectives are identified and initial actions are being implemented. However, assessment of the environmental performance of both ports based on concrete indicators was not done. Further efforts are needed to advance the environmental management system to contribute more to the protection of the Mediterranean and Black Sea region.

Seaports are major hubs of economic activities. It is an increasing trend that they handle not only ships but they are crossroads of transport networks where sea routes meet rail, road and inland navigation and vice versa (ESPO, 2004 and ESPO-ITMMA, 2007). Seaports are the main gateway for Europe with constant movement of ships, trains, trucks and barges, bringing containers, pallets, bags, and bulk to and from the European hinterland. On average, European harbours accommodate 2 million vessels per year and handle 3.5 billion tonnes of goods and 350 million passengers (ESPO, 2004). There are over 1000 harbours along the European coastlines (EC, 2007). Seaports around the world face increasing pressure to develop larger and more efficient to accommodate soaring waterborne traffic. In Europe, ports are even under higher pressure to follow stringent environmental standards while maintaining their competitiveness in a very demanding market. Although maritime transports are reported to produce 13 times less pollution than road transport in terms of carbon and particulate emissions and 19 times less in terms of hydrocarbons, environmental issues at the port areas are still of great concern (ESPO, 2004). Maritime transport has adverse environmental impacts, such as water pollution through the discharges of oil and sewage water from ports and vessels, air pollution from exhaust gases emitted from the vessel’s engine, water pollution by toxins (such as Tributyltin or TBT and its derivatives, heavy metals), and the translocation of harmful organisms and pathogens via ballast water and sediments inside ballast water tanks (Hallegraeff and Bolch, 1991, Gollasch, 2006, Gollasch and Leppäkoski, 2007, Ruiz et al., 2000, David et al., 2007a, David et al., 2007b, EU Commission, 2007 and UNCTAD, 2007). The Mediterranean and the Black Sea regions host the highest density of ports in Europe. Amongst 180 main ports that together handling at least 80% of the country’s cargo traffic in the whole of Europe-25 in 2004, 63 are located around the Mediterranean Sea (EC, 2007). (Note: Main ports are those handle over 1 million tonnes of goods per year.) This figure excludes ports in Turkey, Georgia, Ukraine and Russia around the Black Sea and other Mediterranean countries that not belong to the European Union. Bulgarian seaports face many environmental issues such as air pollution, water pollution, dredging, wastes, oily waste, etc. They are classified as “black points” of pollution in the Black Sea region that require special attention and actions (BSC, 2002 and BSC, 2007). Therefore, there is an urgent need to put an Environmental Management System (EMS) in place to deal with those problems. An EMS is a continuous cycle of planning, implementation, review and improvement of processes and actions that an organisation undertakes to meet its environmental obligations. It is a part of the overall management system and contains all components common for a management system (Sheldon and Yoxon, 2002; Whitelaw, 2004). The EMS has different targets: improving environmental performance; complying with environmental laws and regulations; reducing environmental liability; managing effectively resources in achieving environmental obligations; and improving general business/production performance (Fig. 1). For the majority of the organisations, many elements of an EMS may already be in place as they are common to management processes, such as quality, health and safety, finance, or human resources. Integrating environmental management with other key processes can improve financial, quality and environmental performance. An EMS can be an investment in long-term development of the business: businesses can build a better reputation that helps to keep existing customers, clients and investors and attract new ones.

Bulgarian seaports face obligations to contribute actively to the protection of the Black Sea. First steps of the EMS have been implemented. These include the identification of the environmental protection objectives and the implementation of the first actions. It is clear that the foundation for the implementation of EMS is there, evident by the impressive body of legislations from international and regional down to national levels. However, it is proved that implementation at the ports is lagging behind. Current actions in the EMS plan are timid, in comparison to the need of actions to protect the environment in and around the port, and to respond to stringer regulations at all levels. Further efforts are needed to extend the current EMS schemes to meet the international and European standards. The ports need to focus their effort on reviewing their current activities (including environmental management activities) to adapt their EMS to fit with their development. A more rigorous environmental monitoring plan should be implemented to provide basis for actions and can help detailing their action plan, and avoiding “vague” statements. The next logical step is to create a communication and training plan to equip ports’ workers and stakeholders with knowledge to implement the EMS. Finally, external review should be carried out, which will provide the port with more criticisms and advices.