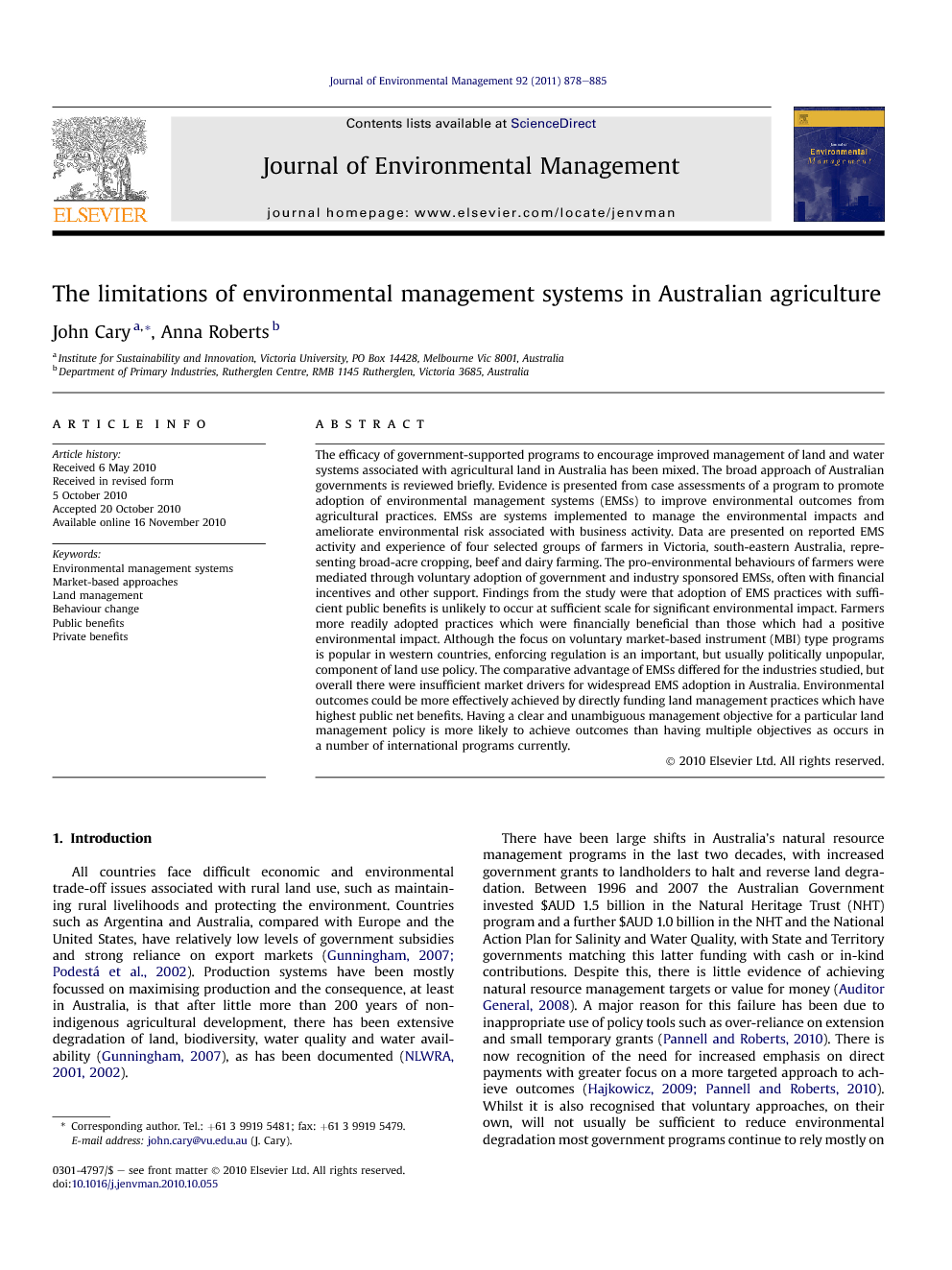 The efficacy of government-supported programs to encourage improved management of land and water systems associated with agricultural land in Australia has been mixed. The broad approach of Australian governments is reviewed briefly. Evidence is presented from case assessments of a program to promote adoption of environmental management systems (EMSs) to improve environmental outcomes from agricultural practices. EMSs are systems implemented to manage the environmental impacts and ameliorate environmental risk associated with business activity. Data are presented on reported EMS activity and experience of four selected groups of farmers in Victoria, south-eastern Australia, representing broad-acre cropping, beef and dairy farming. The pro-environmental behaviours of farmers were mediated through voluntary adoption of government and industry sponsored EMSs, often with financial incentives and other support. Findings from the study were that adoption of EMS practices with sufficient public benefits is unlikely to occur at sufficient scale for significant environmental impact. Farmers more readily adopted practices which were financially beneficial than those which had a positive environmental impact. Although the focus on voluntary market-based instrument (MBI) type programs is popular in western countries, enforcing regulation is an important, but usually politically unpopular, component of land use policy. The comparative advantage of EMSs differed for the industries studied, but overall there were insufficient market drivers for widespread EMS adoption in Australia. Environmental outcomes could be more effectively achieved by directly funding land management practices which have highest public net benefits. Having a clear and unambiguous management objective for a particular land management policy is more likely to achieve outcomes than having multiple objectives as occurs in a number of international programs currently.

All countries face difficult economic and environmental trade-off issues associated with rural land use, such as maintaining rural livelihoods and protecting the environment. Countries such as Argentina and Australia, compared with Europe and the United States, have relatively low levels of government subsidies and strong reliance on export markets (Gunningham, 2007 and Podestá et al., 2002). Production systems have been mostly focussed on maximising production and the consequence, at least in Australia, is that after little more than 200 years of non-indigenous agricultural development, there has been extensive degradation of land, biodiversity, water quality and water availability (Gunningham, 2007), as has been documented (NLWRA, 2001 and NLWRA, 2002). There have been large shifts in Australia’s natural resource management programs in the last two decades, with increased government grants to landholders to halt and reverse land degradation. Between 1996 and 2007 the Australian Government invested $AUD 1.5 billion in the Natural Heritage Trust (NHT) program and a further $AUD 1.0 billion in the NHT and the National Action Plan for Salinity and Water Quality, with State and Territory governments matching this latter funding with cash or in-kind contributions. Despite this, there is little evidence of achieving natural resource management targets or value for money (Auditor General, 2008). A major reason for this failure has been due to inappropriate use of policy tools such as over-reliance on extension and small temporary grants (Pannell and Roberts, 2010). There is now recognition of the need for increased emphasis on direct payments with greater focus on a more targeted approach to achieve outcomes (Hajkowicz, 2009 and Pannell and Roberts, 2010). Whilst it is also recognised that voluntary approaches, on their own, will not usually be sufficient to reduce environmental degradation most government programs continue to rely mostly on such approaches, sometimes with small incentive payments (Gunningham, 2007). 1.1. Market-oriented approaches As in many parts of Europe (Requate, 2005), the United States of America (Feng et al., 2006), and Canada (Smithers and Furman, 2003) the use of voluntary, market-oriented approaches, particularly market-based instruments (MBIs), to tackle natural resource degradation has received growing attention in Australia. MBIs address the market failure of negative environmental externalities typically by incorporating the external cost of production or consumption activities through taxes or charges on processes or products, or by creating property rights and facilitating the establishment of proxy markets. Market-oriented approaches have gained favour in agriculture for several reasons, including that the provision of incentives through price signals can be flexible, allow for innovation, and can be more cost-efficient than ‘command and control’ approaches (Gunningham, 2007 and Requate, 2005). In addition, regulation of small businesses such as farms is both difficult and unpopular (Gunningham, 2007). 1.2. Environmental Management Systems An EMS is a process designed to manage the environmental impacts of a business and to ameliorate environmental risk associated with production, business and marketing activity. It requires a business to meet its environmental obligations, identify significant threats and manage them (Seymour and Ridley, 2005 and Morelli, 1999). It integrates environmental management into daily operations, long term planning and quality management. EMS and pre-cursor systems have been trialled in agriculture in countries including Europe, the USA, Canada, Australia and New Zealand (Galan et al., 2007, Gunningham, 2007, Manderson et al., 2007, Robinson, 2006 and Seymour and Ridley, 2005). The Ontario Environmental Farm Plan Scheme is the most successful pre-cursor EMS scheme internationally (Smithers and Furman, 2003 and Robinson, 2006). The combined drivers of the perceived demands for trade and apparent community expectations for implementing environmental assurance in food production led to the encouragement of EMS for many sectors of Australian agriculture. Between 2003 and 2007, the Australian government provided $AUD 8.5 million to stimulate the voluntary adoption of farm-based EMS across a range of agricultural industries. Fifteen projects were funded, representing a diverse range of industries, regions, partnerships and natural resource management problems (EMS Implementation Working Group, 2003). The government policy supporting EMS embraced elements of a market-oriented approach by potentially encouraging market differentiation via eco-labelling and certification and helping create, or to respond to, new markets for environmental friendly agricultural production. Government policy sought to improve production efficiency, while minimizing negative environmental externalities and improving broad scale natural resource management. However the program focussed on farm production aspects without insisting programs be linked to markets and specifically eco-labelled products. The major shortcoming of EMS is that it is process-based and thus does not guarantee environmental performance outcomes (Gunningham, 2007). Several studies have now concluded that the extent of environmental benefits from EMS and pre-cursor schemes are unknown, including within a number of European countries (Science Policy Unit, 2001 as cited in Gunningham, 2007), Canada (Smithers and Furman, 2003 and Robinson, 2006) and New Zealand (Manderson et al., 2007). Although Gunningham (2007) has previously suggested that voluntary environmental management programs such as EMS will be insufficient to achieve outcomes in Australia, this has not been verified. The objective of this study was to assess the likely effectiveness of encouraging the adoption of EMS for achieving desirable environmental outcomes. The specific aims were, firstly, to identify the practices undertaken by farmer groups who have participated in EMS and assess their associated public and private benefits. The second aim was to identify the reasons for participation in EMS programs and assess whether EMS was likely to be widely adopted by farmers based on drivers and barriers to adoption. This, combined with the first aim, provided strong indications as to whether EMS has much potential to achieve environmental outcomes at a landscape or catchment scale. Discussion about the implications for government environmental policy follows.

Voluntary adoption of EMS practices with sufficient public benefits to justify government investment is unlikely to occur at sufficient scale for environmental impact. There were different comparative advantages for EMS for agricultural industries but, overall, there were insufficient market drivers for widespread adoption in Australia as well as insufficient private benefits to individual businesses. Although the focus on voluntary MBI type programs is popular in Australia, enforcing existing regulations is important. Government investment in the environment is likely to be more effectively achieved by directly funding land management practices which have the highest public net benefits.