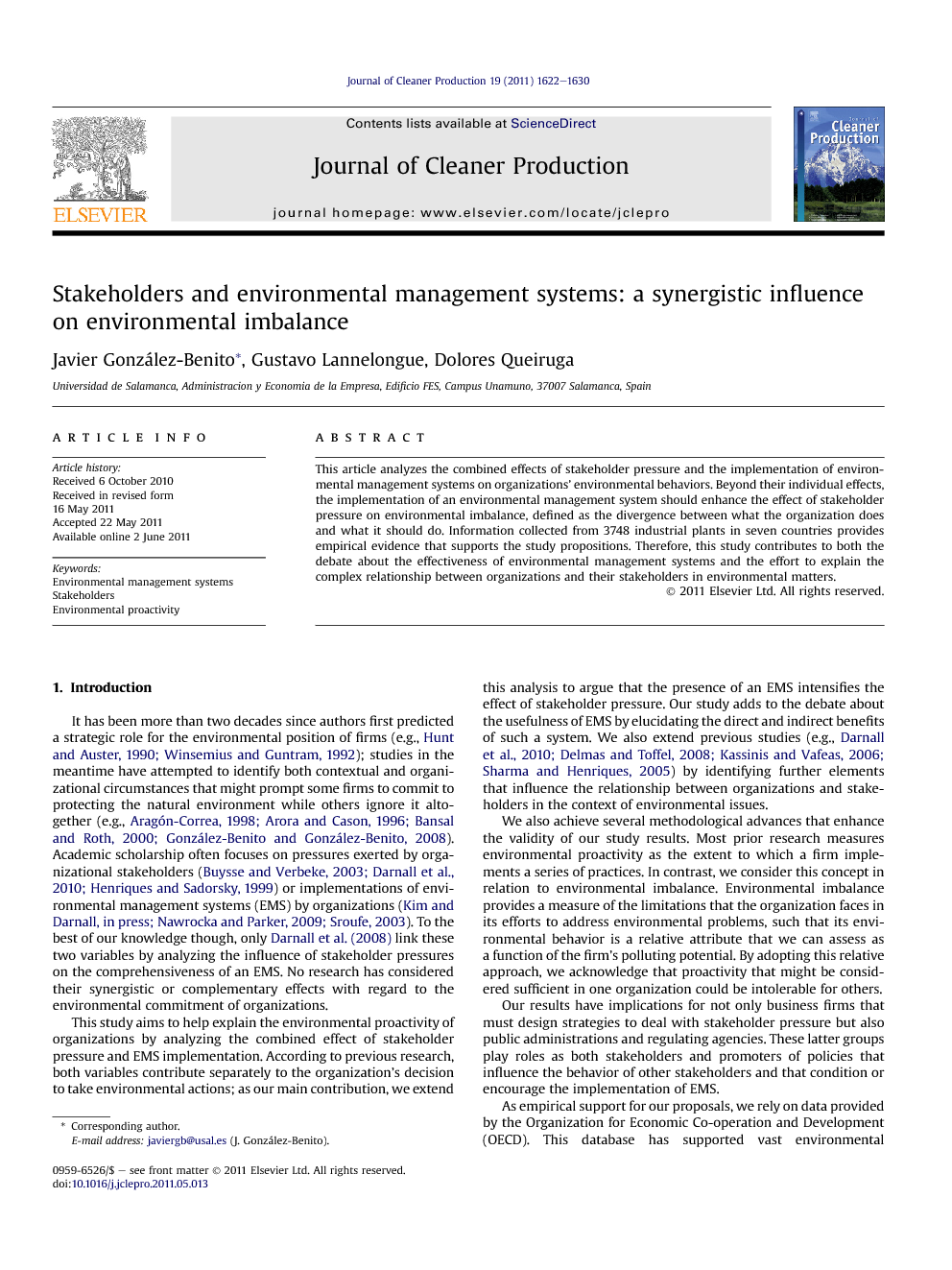 It has been more than two decades since authors first predicted a strategic role for the environmental position of firms (e.g., Hunt and Auster, 1990 and Winsemius and Guntram, 1992); studies in the meantime have attempted to identify both contextual and organizational circumstances that might prompt some firms to commit to protecting the natural environment while others ignore it altogether (e.g., Aragón-Correa, 1998, Arora and Cason, 1996, Bansal and Roth, 2000 and González-Benito and González-Benito, 2008). Academic scholarship often focuses on pressures exerted by organizational stakeholders (Buysse and Verbeke, 2003, Darnall et al., 2010 and Henriques and Sadorsky, 1999) or implementations of environmental management systems (EMS) by organizations (Kim and Darnall, in press, Nawrocka and Parker, 2009 and Sroufe, 2003). To the best of our knowledge though, only Darnall et al. (2008) link these two variables by analyzing the influence of stakeholder pressures on the comprehensiveness of an EMS. No research has considered their synergistic or complementary effects with regard to the environmental commitment of organizations. This study aims to help explain the environmental proactivity of organizations by analyzing the combined effect of stakeholder pressure and EMS implementation. According to previous research, both variables contribute separately to the organization’s decision to take environmental actions; as our main contribution, we extend this analysis to argue that the presence of an EMS intensifies the effect of stakeholder pressure. Our study adds to the debate about the usefulness of EMS by elucidating the direct and indirect benefits of such a system. We also extend previous studies (e.g., Darnall et al., 2010, Delmas and Toffel, 2008, Kassinis and Vafeas, 2006 and Sharma and Henriques, 2005) by identifying further elements that influence the relationship between organizations and stakeholders in the context of environmental issues. We also achieve several methodological advances that enhance the validity of our study results. Most prior research measures environmental proactivity as the extent to which a firm implements a series of practices. In contrast, we consider this concept in relation to environmental imbalance. Environmental imbalance provides a measure of the limitations that the organization faces in its efforts to address environmental problems, such that its environmental behavior is a relative attribute that we can assess as a function of the firm’s polluting potential. By adopting this relative approach, we acknowledge that proactivity that might be considered sufficient in one organization could be intolerable for others. Our results have implications for not only business firms that must design strategies to deal with stakeholder pressure but also public administrations and regulating agencies. These latter groups play roles as both stakeholders and promoters of policies that influence the behavior of other stakeholders and that condition or encourage the implementation of EMS. As empirical support for our proposals, we rely on data provided by the Organization for Economic Co-operation and Development (OECD). This database has supported vast environmental management research (e.g., Arimura et al., 2008, Arimura et al., 2011, Darnall et al., 2008, Darnall et al., 2009, Darnall et al., 2010, Johnstone and Labonne, 2009, Kim and Darnall, in press and Testa and Iraldo, 2010) that helps elucidate the effects of environmental stakeholder pressures and the implementation of EMS. We apply the database to the next step, that is, to consider the interaction between these two variables as a means to explain the environmental proactivity of organizations, according to the concept of environmental imbalance. We structure the remainder of this article in four sections. In Section 2, we introduce the main concepts, review relevant literature, and pose our working hypotheses. We describe the methodology we used to test the hypotheses in Section 3, then present the results in Section 4, along with their main implications and the research opportunities they offer. We conclude in Section 5.

This research enables us to conclude that both stakeholder pressure and EMS implementation offer significant predictive power with regard to organizations’ proactive environmental behaviors. However, their predictions become notably more precise in combination. Thus EMS appear to provide useful tools for firms that want to satisfy the environmental demands of their stakeholders. Moreover, in line with Dutton and Duncan (1987), our analyses suggest that the environmental transformation of organizations depends on not only a sense of urgency, as motivated by stakeholder pressure, but also the perception of feasibility, as derived from the existence of an EMS. To understand the mechanisms behind the formulation and implementation of environmental strategies more fully, it is necessary to study both the direct effect of and the interactions among different explanatory variables.