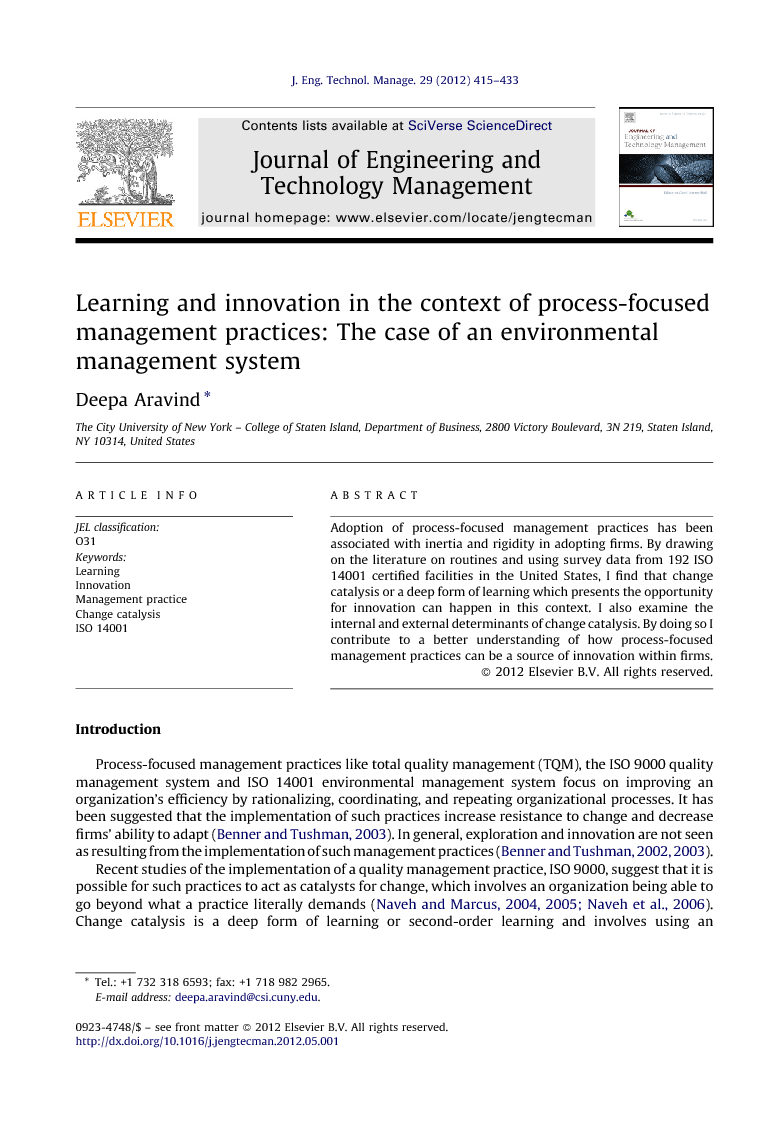 Adoption of process-focused management practices has been associated with inertia and rigidity in adopting firms. By drawing on the literature on routines and using survey data from 192 ISO 14001 certified facilities in the United States, I find that change catalysis or a deep form of learning which presents the opportunity for innovation can happen in this context. I also examine the internal and external determinants of change catalysis. By doing so I contribute to a better understanding of how process-focused management practices can be a source of innovation within firms.

Process-focused management practices like total quality management (TQM), the ISO 9000 quality management system and ISO 14001 environmental management system focus on improving an organization's efficiency by rationalizing, coordinating, and repeating organizational processes. It has been suggested that the implementation of such practices increase resistance to change and decrease firms’ ability to adapt (Benner and Tushman, 2003). In general, exploration and innovation are not seen as resulting from the implementation of such management practices (Benner and Tushman, 2002 and Benner and Tushman, 2003). Recent studies of the implementation of a quality management practice, ISO 9000, suggest that it is possible for such practices to act as catalysts for change, which involves an organization being able to go beyond what a practice literally demands (Naveh and Marcus, 2004, Naveh and Marcus, 2005 and Naveh et al., 2006). Change catalysis is a deep form of learning or second-order learning and involves using an implemented practice as a springboard for the introduction of innovations and as a catalyst for rethinking the way the organization does business (Naveh and Marcus, 2004 and Naveh et al., 2006). These studies found that such exploring, branching out and innovating in new directions (Eisenhardt and Tabrizi, 1995) based on the rules of ISO 9000 allow implementing firms to derive both operational and performance benefits. Other research on exploration and exploitation has also found explorative activities to be related to long-term performance (Auh and Menguc, 2005). Because of its positive impacts on both operational and business performance of organizations, change catalysis is important and scholars have called for more research on this phenomenon in the context of practices and standards (Naveh and Marcus, 2005). We know little about change catalysis in other contexts and also the factors that affect it. In this study, I seek to fill these gaps by examining whether change catalysis exists in a novel context, the ISO 14001 environmental management system (EMS) and then studying the determinants of change catalysis in this context. This international certifiable management standard is intended to reduce and manage the environmental impacts of organizations of any size and type across the world. I seek to extend the literature on implementation by investigating whether ISO 14001 can really be the basis for further innovation and what factors affect this outcome. I base my hypotheses on the literature on routines (e.g., Feldman and Pentland, 2003 and Howard-Grenville, 2005) and the literature on implementation of management practices (e.g., Naveh and Marcus, 2004 and Naveh et al., 2006). My findings suggest that in the context of the ISO 14001 environmental EMS, change catalysis can happen and that both the organizational context and external factors affect it. Specifically, I find that benefits of the practice, importance of environmental issues in the firm, focus on process innovation, and customer evaluation and feedback of environmental performance are positively related to this variable in the context of ISO 14001 EMS. I conclude that under the right conditions, implementation of ISO 14001 can be the basis for additional innovation. I also discuss the academic and managerial implications of the study.

Organizational routines are an important element of organizations (Cyert and March, 1963 and Feldman, 2003). The traditional thinking has been that routines are stable and inflexible and are “relatively mindless repetition of actions” (Feldman, 2003, p. 728). However, more recent research indicates that routines can also be a source of organizational learning, flexibility and change because they are not mindless; but are effortful, emergent accomplishments (Feldman, 2000, Feldman and Pentland, 2003 and Howard-Grenville, 2005). In this study, drawing from this literature, I examined factors within the organizational context as well as one factor from the external context that affect change catalysis. Change catalysis is a phenomenon where a firm learns when implementing a practice and the practice becomes a catalyst for additional innovation (Naveh and Marcus, 2004 and Naveh et al., 2006), rather than resulting in increasing resistance to change and reduced ability to adapt (or favoring merely exploitative activities to the detriment of more exploratory activities) (Benner and Tushman, 2002, Benner and Tushman, 2003 and March, 1991). Even though I took several measures to reduce common method bias and performed a statistical test to determine its extent, presence of this bias to some extent is a limitation of this study and efforts should be made by future researchers to reduce this bias as much as possible. Also, an interesting extension of this research would be to examine interactions between some of the determinants of change catalysis identified in this study. For example, if a firm has high process innovation capability and it accords high importance to the environment, we could expect higher effect on change catalysis. Interactions such as these should be empirically examined in future studies. Additionally, a fruitful area of research is implementation of practices such as ISO 14001. There are several studies that have examined adoption of ISO standards and the impact of adoption of such standards on performance (e.g., Darnall, 2006 and King et al., 2005). However, even though there are studies on the implementation of administrative innovations such as information systems (e.g., Dong et al., 2008), there are not many studies that examine the implementation of ISO standards (Aravind and Christmann, 2011). This is a serious omission since certification by itself may not have any meaning if firms do not change their behaviors in accordance with the practice. Hence how firms actually implement the practice should be studied. Yet another avenue for future research is to explore other antecedents of change catalysis, thereby contributing to a better understanding of this interesting phenomenon. For instance, agency and power of organizational actors have been suggested as affecting how routines change (Feldman and Pentland, 2003, Howard-Grenville, 2005 and Parmigiani and Howard-Grenville, 2011). Agency indicates intentional behavior by actors involved in the enactment of routines and power indicates the ability of these actors to make changes in routines as part of the routines. These factors could not be investigated in this study but need to be examined in future studies. Of course, the extent to which learning and innovation happens would differ across firms and therefore the likelihood of using ISO 14001 as a catalyst for change and the extent to which change catalysis occurs would differ across firms. This study is an attempt to understand the contexts where change catalysis is more likely to happen. A conclusion of this study is that under the right conditions, implementation of ISO 14001 can have positive outcomes such as learning and innovation. Therefore implementation of ISO 14001 and other such process-focused management practices deserves more research attention.