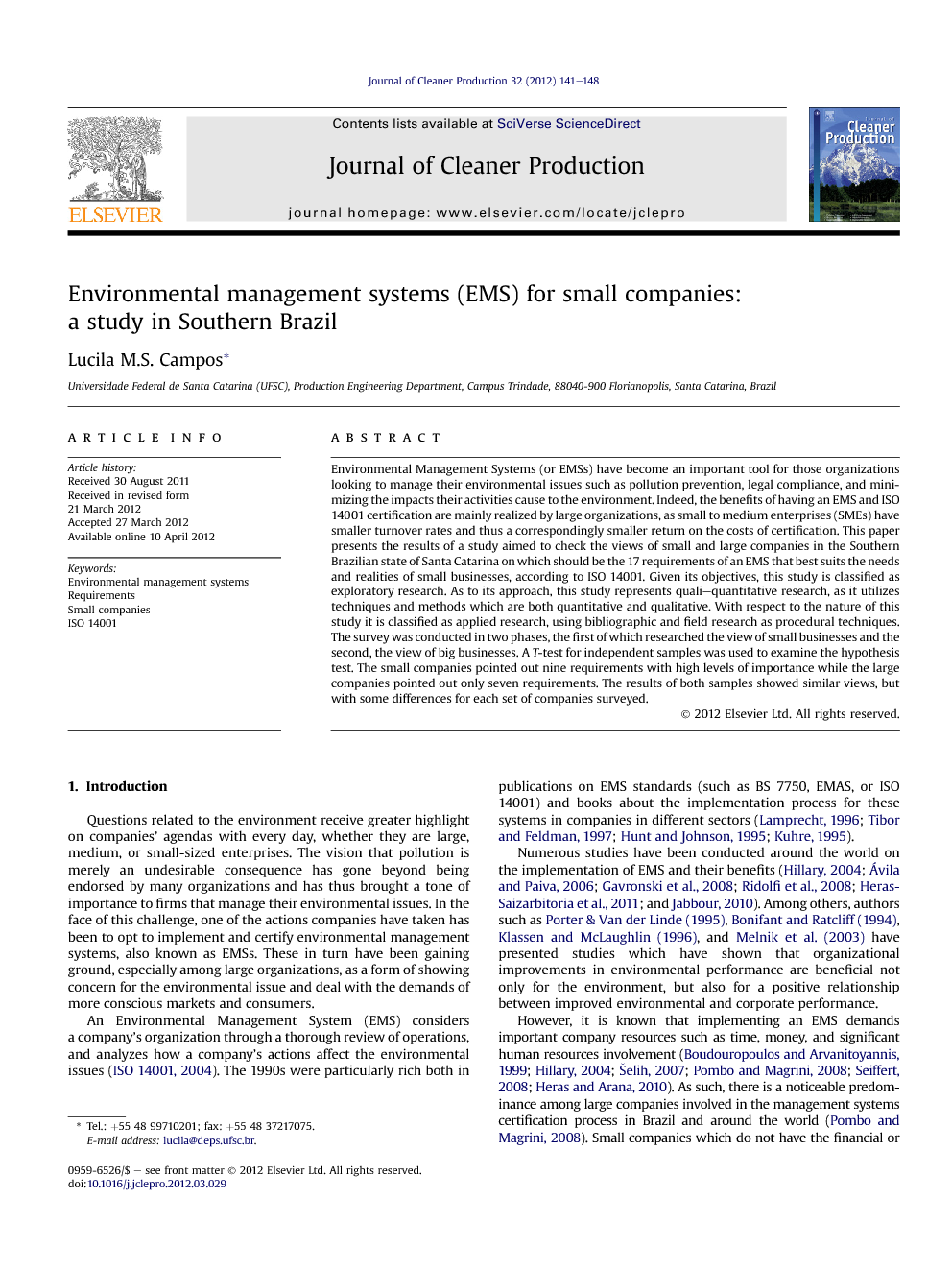 Environmental Management Systems (or EMSs) have become an important tool for those organizations looking to manage their environmental issues such as pollution prevention, legal compliance, and minimizing the impacts their activities cause to the environment. Indeed, the benefits of having an EMS and ISO 14001 certification are mainly realized by large organizations, as small to medium enterprises (SMEs) have smaller turnover rates and thus a correspondingly smaller return on the costs of certification. This paper presents the results of a study aimed to check the views of small and large companies in the Southern Brazilian state of Santa Catarina on which should be the 17 requirements of an EMS that best suits the needs and realities of small businesses, according to ISO 14001. Given its objectives, this study is classified as exploratory research. As to its approach, this study represents quali–quantitative research, as it utilizes techniques and methods which are both quantitative and qualitative. With respect to the nature of this study it is classified as applied research, using bibliographic and field research as procedural techniques. The survey was conducted in two phases, the first of which researched the view of small businesses and the second, the view of big businesses. A T-test for independent samples was used to examine the hypothesis test. The small companies pointed out nine requirements with high levels of importance while the large companies pointed out only seven requirements. The results of both samples showed similar views, but with some differences for each set of companies surveyed.

Questions related to the environment receive greater highlight on companies' agendas with every day, whether they are large, medium, or small-sized enterprises. The vision that pollution is merely an undesirable consequence has gone beyond being endorsed by many organizations and has thus brought a tone of importance to firms that manage their environmental issues. In the face of this challenge, one of the actions companies have taken has been to opt to implement and certify environmental management systems, also known as EMSs. These in turn have been gaining ground, especially among large organizations, as a form of showing concern for the environmental issue and deal with the demands of more conscious markets and consumers. An Environmental Management System (EMS) considers a company's organization through a thorough review of operations, and analyzes how a company's actions affect the environmental issues (ISO 14001, 2004). The 1990s were particularly rich both in publications on EMS standards (such as BS 7750, EMAS, or ISO 14001) and books about the implementation process for these systems in companies in different sectors (Lamprecht, 1996; Tibor and Feldman, 1997; Hunt and Johnson, 1995; Kuhre, 1995). Numerous studies have been conducted around the world on the implementation of EMS and their benefits (Hillary, 2004; Ávila and Paiva, 2006; Gavronski et al., 2008; Ridolfi et al., 2008; Heras-Saizarbitoria et al., 2011; and Jabbour, 2010). Among others, authors such as Porter & Van der Linde (1995), Bonifant and Ratcliff (1994), Klassen and McLaughlin (1996), and Melnik et al. (2003) have presented studies which have shown that organizational improvements in environmental performance are beneficial not only for the environment, but also for a positive relationship between improved environmental and corporate performance. However, it is known that implementing an EMS demands important company resources such as time, money, and significant human resources involvement (Boudouropoulos and Arvanitoyannis, 1999; Hillary, 2004; Šelih, 2007; Pombo and Magrini, 2008; Seiffert, 2008; Heras and Arana, 2010). As such, there is a noticeable predominance among large companies involved in the management systems certification process in Brazil and around the world (Pombo and Magrini, 2008). Small companies which do not have the financial or human resources are left by the wayside in this process, in order to meet the minimum demands of the EMS implementation process. The importance of micro and small companies upon Brazil's economic structure and employment can be verified through analyzing data from RAIS-Relação Anual de Informações Sociais (Annual Social Information Report) (BRASIL/MTE, 2008). Such data demonstrates that in 2008 close to 5.8 million establishments were responsible for 13.0 million formal jobs. There are several existing studies in development which examine the main theme of small enterprise operations (Farah, 2004; Chavan, 2005; Longenecker et al., 2006; Silva and Pereira, 2006; Machado and Espinha, 2007; Šelih, 2007; Ramos et al., 2011; and Grapeggia et al., 2011). Currently, the importance of small companies as sources of employment and local development for the regions in which they are inserted has been widely discussed. In other words, the infinity of their important contributions to the economy has been widely discussed. Motivated initially to identify forms of adapting the implementation of an EMS to the needs and possibilities of a small company, the present research was planned. The scope was to carry out this study together with a set of companies from the state of Santa Catarina, located in the southern region of Brazil, seeking to identify which of the 17 requirements of the ISO 14001 would be the most important in order to best adapt an Environmental Management System to the needs of small companies, according to the minds of small company managers. The results of this study generated information that contributed above all to better understand how an environmental management system must be built, given the reality of this kind of company. Upon presenting these results in events in the areas of administration and production engineering, discussions emerged concerning the need to verify opinions surrounding the same question (more applicable ISO 14001 requirements to a small company EMS) within certified large companies. Thus, we opted to continue the research and apply the survey sent to small companies to the large EMS-certified companies (according to the ISO 14001) within the state of Santa Catarina. There were two main questions which guided this second stage of the study: The first was, “Based on the fact that small companies normally supply their products and services to large companies, what would be the view of the large companies concerning the main requirements of an EMS for small companies?” The second was, “Would large companies agree or disagree with the small companies about the most important requirements for an EMS in a small company?” Therefore, the main objective of this article is to present the results of a study which sought to identify which of the 17 ISO 14001 (version 2004) requirements would be the most applicable in elaborating an Environmental Management System (EMS) for small companies, using comparative analysis among data collected from small and large companies from Santa Catarina, Brazil. However, it is very important to highlight that it was not the intention of this study to create an implementation model for small companies, since it is known that an implementation of an EMS containing only the ISO 14001 requirements selected herein would not lead to EMS certification. Beyond this introduction, the article presents four more sections. The second section outlines the theoretical framework involved, presenting environmental management and small business themes. The third section presents the research methods, an item which is sub-divided into three sub-topics: i) methods of stage 1 of the study (small companies); ii) methods of stage 2 of the study (large companies); and iii) comparative analysis. This article also presents the research results and comparisons made, concluding with final considerations.

It is important to highlight again that defining a model of an EMS applicable to small businesses was not the main focus of this paper. But, as a result from the perspective of the two samples studied (small and large companies in Santa Catarina), a set of 10 ISO 14001 requirements considered at first more important or more adequate to receive attention in the case of a small company seeking the implementation of an EMS emerges. This can bring new perspectives to small companies and help management in the beginning of the implementation process. During the development of this study, it was possible to observe some differences among the perspectives of small and large companies. The sample of small companies pointed out 9 requirements with a high level of importance. On the other hand, the sample of large companies with an EMS-certified pointed out only 7 requirements with a high level of importance. In general, however, it can be considered that the set of responses from large companies does not differ considerably from the set of responses provided by small companies. So, the results show a group of 10 requirements with a high level of importance for an EMS applicable to small companies. It surprised us at first that small companies, copying the traditional implementation models, were concerned with legal aspects which would pass institutional supervision. However, this result corroborates with others studies (Moreira, 2001; Seiffert, 2008) that showed these are in fact important requirements, or else the company would not possess any knowledge whatsoever concerning the activities the company carries out which could be infracting upon applicable legislation. Another surprise was the presence of three requirements related to control: system documentation, operational control, and monitoring and measurement, which appeared among the 9 requirements of greatest importance to an EMS for small companies according the vision of the small sample. But again, we found another study (Chavan, 2005) that showed the importance of these requirements for an EMS applicable in small companies. Although the number of small companies which effectively participated in the study is relatively small in the face of the universe of small companies which operate in the state of Santa Catarina, Brazil, one considers that this study offers its contribution in the sense that it seeks to explore a theme much more present in the universe of large organizations than that of small organizations. With the number of responding large companies representing 40% of the population, one can consider that a good return was achieved. It is also important to highlight that this proposal does not conclude the subject, nor does it intend to place it as a more appropriate view of these organizations. This study merely sought to verify whether there were or were not differences among the opinions of the two samples under study. But it can bring new ideas of research for the academic field. Seiffert (2008) presented a paper with the results of applying an EMS model for small and medium enterprises (SME), developed by the author. This, for example, could be a proposal for future research, the implementation of an EMS in a small company using the 10 requirements resulting from the research of this article as a base. Another suggestion for future work should be a study concerning the use of environmental performance indicators in a small company with an EMS (even those not certified).