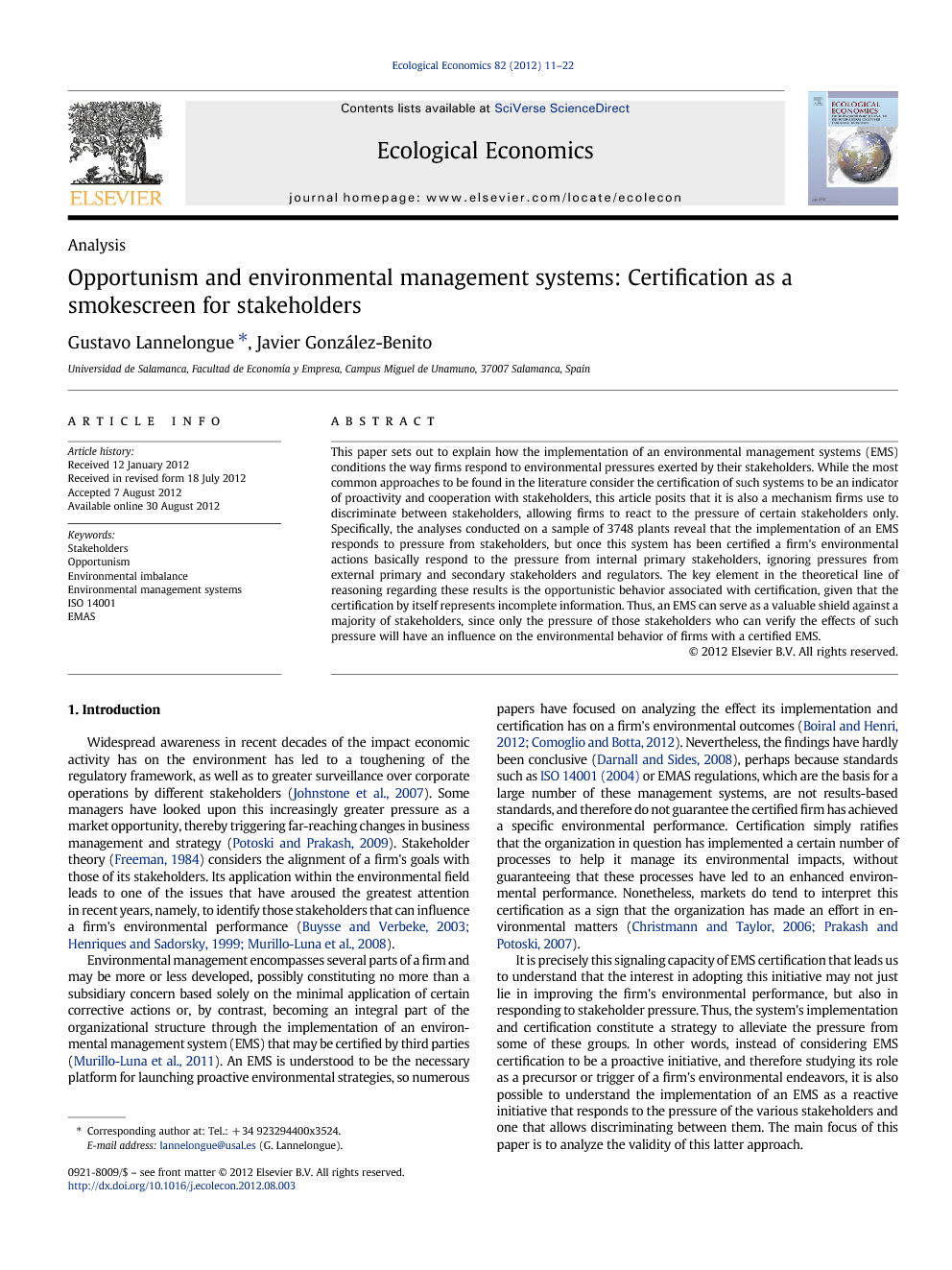 This paper sets out to explain how the implementation of an environmental management systems (EMS) conditions the way firms respond to environmental pressures exerted by their stakeholders. While the most common approaches to be found in the literature consider the certification of such systems to be an indicator of proactivity and cooperation with stakeholders, this article posits that it is also a mechanism firms use to discriminate between stakeholders, allowing firms to react to the pressure of certain stakeholders only. Specifically, the analyses conducted on a sample of 3748 plants reveal that the implementation of an EMS responds to pressure from stakeholders, but once this system has been certified a firm's environmental actions basically respond to the pressure from internal primary stakeholders, ignoring pressures from external primary and secondary stakeholders and regulators. The key element in the theoretical line of reasoning regarding these results is the opportunistic behavior associated with certification, given that the certification by itself represents incomplete information. Thus, an EMS can serve as a valuable shield against a majority of stakeholders, since only the pressure of those stakeholders who can verify the effects of such pressure will have an influence on the environmental behavior of firms with a certified EMS.

Widespread awareness in recent decades of the impact economic activity has on the environment has led to a toughening of the regulatory framework, as well as to greater surveillance over corporate operations by different stakeholders (Johnstone et al., 2007). Some managers have looked upon this increasingly greater pressure as a market opportunity, thereby triggering far-reaching changes in business management and strategy (Potoski and Prakash, 2009). Stakeholder theory (Freeman, 1984) considers the alignment of a firm's goals with those of its stakeholders. Its application within the environmental field leads to one of the issues that have aroused the greatest attention in recent years, namely, to identify those stakeholders that can influence a firm's environmental performance (Buysse and Verbeke, 2003, Henriques and Sadorsky, 1999 and Murillo-Luna et al., 2008). Environmental management encompasses several parts of a firm and may be more or less developed, possibly constituting no more than a subsidiary concern based solely on the minimal application of certain corrective actions or, by contrast, becoming an integral part of the organizational structure through the implementation of an environmental management system (EMS) that may be certified by third parties (Murillo-Luna et al., 2011). An EMS is understood to be the necessary platform for launching proactive environmental strategies, so numerous papers have focused on analyzing the effect its implementation and certification has on a firm's environmental outcomes (Boiral and Henri, 2012 and Comoglio and Botta, 2012). Nevertheless, the findings have hardly been conclusive (Darnall and Sides, 2008), perhaps because standards such as ISO 14001 (2004) or EMAS regulations, which are the basis for a large number of these management systems, are not results-based standards, and therefore do not guarantee the certified firm has achieved a specific environmental performance. Certification simply ratifies that the organization in question has implemented a certain number of processes to help it manage its environmental impacts, without guaranteeing that these processes have led to an enhanced environmental performance. Nonetheless, markets do tend to interpret this certification as a sign that the organization has made an effort in environmental matters (Christmann and Taylor, 2006 and Prakash and Potoski, 2007). It is precisely this signaling capacity of EMS certification that leads us to understand that the interest in adopting this initiative may not just lie in improving the firm's environmental performance, but also in responding to stakeholder pressure. Thus, the system's implementation and certification constitute a strategy to alleviate the pressure from some of these groups. In other words, instead of considering EMS certification to be a proactive initiative, and therefore studying its role as a precursor or trigger of a firm's environmental endeavors, it is also possible to understand the implementation of an EMS as a reactive initiative that responds to the pressure of the various stakeholders and one that allows discriminating between them. The main focus of this paper is to analyze the validity of this latter approach. With a view to pursuing this goal, this article will show that, firstly, firms try to please their stakeholders by implementing and certifying an EMS, because those firms deciding to implement and certify an EMS are those that detect greater environmental pressure from their stakeholders. And, secondly, it will show that the effect of stakeholder pressure change when a firm implements its EMS and has it certified. Accordingly, we contend that once a firm has had its EMS certified, the influence of certain stakeholders diminishes. From then on, efforts to reduce the environmental impact are conditioned largely by those stakeholders classified in the literature as primary and internal. This will enable us to further explore the relationships between stakeholders and a firm's environmental behavior. On the one hand, it allows us to contribute to the debate on the opportunistic use of EMSs and the role they really do play in environmental management. On the other hand, the findings of this research will be of use to regulatory bodies when defining and appraising the ever more frequent public policies designed to foster the implementation of EMSs by firms. Finally, our findings may also help professionals to identify other ramifications of their EMSs that go beyond the direct effect on the environmental impact. In order to answer the questions posed above, the paper is arranged into five further sections. This first section serves as an introduction to the research question. The second section analyzes the literature on stakeholders, environmental management systems and opportunism amongst certified firms, and two hypotheses are formulated that provide a response to the questions posed. The third section describes the empirical methodology used for testing these two hypotheses. The fourth section describes the results obtained. The fifth initiates a discussion on the implications of the results obtained and, finally, the sixth section presents the paper's main conclusions.

This paper has considered the impact stakeholder pressure has on the implementation or not of an EMS and its certification by a firm, and its subsequent relationship with environmental proactivity. There is a relationship between the pressure exerted by regulators and industrial associations and a smaller environmental imbalance in firms without an EMS or with an uncertified EMS. The findings of this research indicate that this effect is nullified when a firm has its EMS certified. These conclusions should lead to a reconsideration of the role the pressure of public agencies has on firms in environmental matters. The same occurs with external and secondary stakeholders, except in the case of neighborhood/community associations. Only the pressure of those who can actually verify the effects of such pressure on a firm (primary stakeholders) appears to have an influence on the environmental imbalance in firms with a certified EMS. Managers should bear in mind that certification is a valuable shield against most stakeholders, although they should establish points of convergence with their shareholders, employees and local organizations, as they continue to be vulnerable to their pressures. Likewise, public administrations should reconsider their policies for fomenting EMSs or the manner in which they address organizations with a certified EMS. These conclusions do not detract from the validity of the overall performance of an EMS in a firm, as we only have focused on a specific aspect by studying the impact of stakeholder pressure. Instead, they highlight the importance of rigorous auditing and control systems for certifications to protect and reinforce the efforts organizations make in environmental matters.