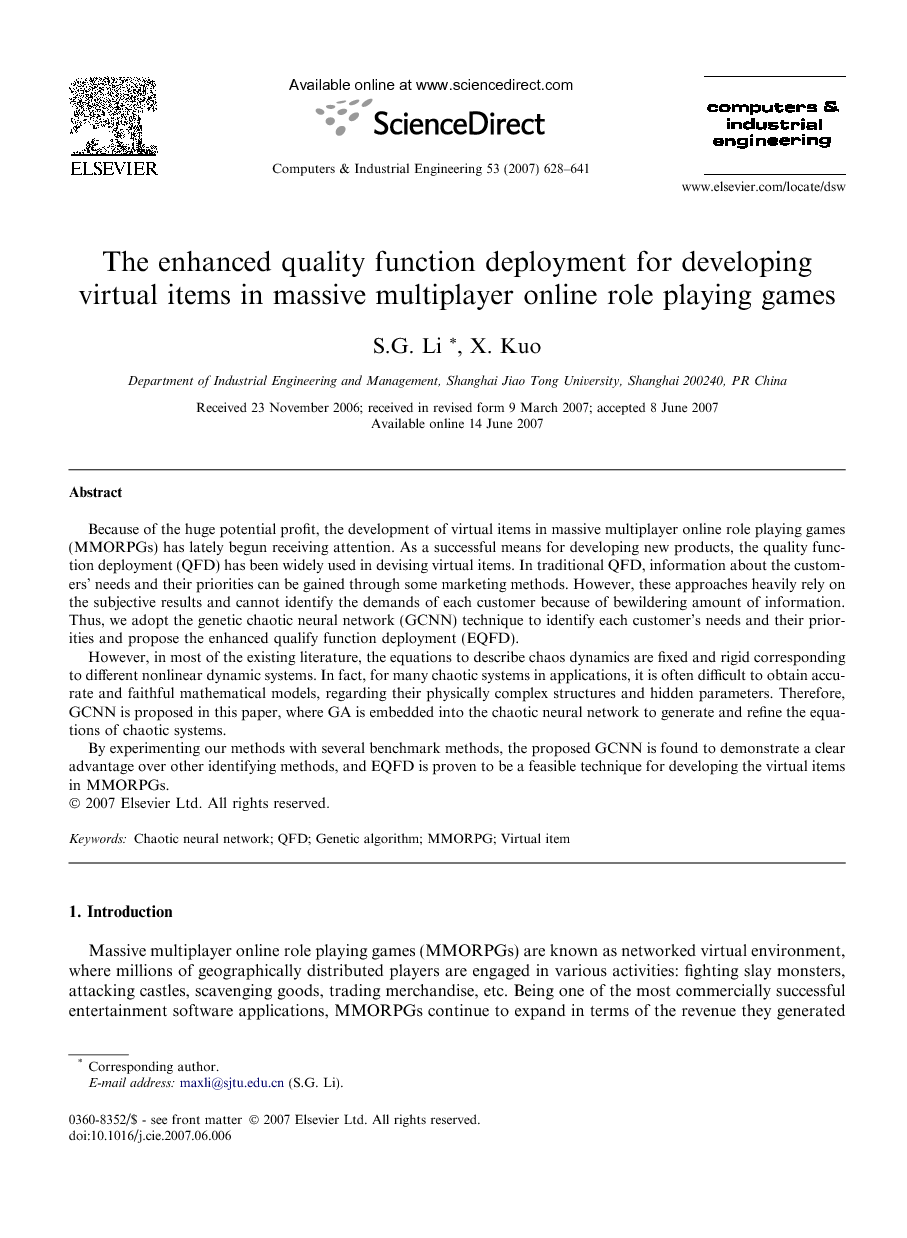 Because of the huge potential profit, the development of virtual items in massive multiplayer online role playing games (MMORPGs) has lately begun receiving attention. As a successful means for developing new products, the quality function deployment (QFD) has been widely used in devising virtual items. In traditional QFD, information about the customers’ needs and their priorities can be gained through some marketing methods. However, these approaches heavily rely on the subjective results and cannot identify the demands of each customer because of bewildering amount of information. Thus, we adopt the genetic chaotic neural network (GCNN) technique to identify each customer’s needs and their priorities and propose the enhanced qualify function deployment (EQFD). However, in most of the existing literature, the equations to describe chaos dynamics are fixed and rigid corresponding to different nonlinear dynamic systems. In fact, for many chaotic systems in applications, it is often difficult to obtain accurate and faithful mathematical models, regarding their physically complex structures and hidden parameters. Therefore, GCNN is proposed in this paper, where GA is embedded into the chaotic neural network to generate and refine the equations of chaotic systems. By experimenting our methods with several benchmark methods, the proposed GCNN is found to demonstrate a clear advantage over other identifying methods, and EQFD is proven to be a feasible technique for developing the virtual items in MMORPGs.

Massive multiplayer online role playing games (MMORPGs) are known as networked virtual environment, where millions of geographically distributed players are engaged in various activities: fighting slay monsters, attacking castles, scavenging goods, trading merchandise, etc. Being one of the most commercially successful entertainment software applications, MMORPGs continue to expand in terms of the revenue they generated as well as the involvement of users who congregate in their virtual space and form communities around them to support each other (Chee et al., 2006 and Hsu and Lu, 2005). On the other hand, since the game makers face stronger competition in global MMORPG market, most of them provide the free online games to try to penetrate the indoor or foreign markets. In this situation, selling virtual items, which are digital items provided in MMORPGs and used to enhance the abilities, skills or status of players, has proven potential for profitability and is a viable business model that guarantees profit (Loebbecke & Powell, 2002). Thus, game sites have also become powerhouses of electronic commerce and are heavily represented in lists of the 100 most heavily trafficked sites globally (Takahashi, 2000). In this paper, we offer the method for developing virtual items based on quality function deployment (QFD) techniques, which adopt the product characteristics to the core needs and preferences of the customers. QFD has been used as a means for developing new products and modifying the existing products since the early 1970s with the purpose of making the product development more efficient (Hauser & Clausing, 1988). Recently, much interest has been focused on the research of integrating other methods into QFD, for instance, incorporating the fuzzy set theory into QFD (Bottani & Rizzi, 2006), embedding the dynamic programming approach into QFD (Lai, Xie, & Tan, 2005), introducing analytic hierarchy process (AHP) into QFD (Kwong & Bai, 2003), etc. In these QFDs, the information about customer’s demands and their priorities has to be gained through some marketing methods: questionnaires, interviews, brainstorming techniques, etc. (Bottani & Rizzi, 2006). However, these approaches heavily rely on the subjective results and cannot identify the requirements and preferences of each customer because of bewildering amount of information. Therefore, the main purpose of this paper is to investigate the possibility and advantages of using enhanced quality function deployment (EQFD) methods in the area of virtual items design in MMORPGs. In EQFD, information of customer’s demands is mainly obtained by mining data in the customer database of MMORPG with genetic chaotic neural network (GCNN), which can avoid the subjective results generated by traditional market methods and identify the demands of each customer. The applications of chaotic neural network (CNN) in data mining domain are very promising. In recent years, there have been many researches on how to use CNN to help us classify and identify the unseen examples (Han et al., 2004 and Lin, 2001). Unlike the static and near-equilibrium behavior of the conventional neural network, CNN has richer and far-from equilibrium dynamics with various coexisting attractors. However, in most of the existing literature, the equations to describe chaos dynamics are fixed and rigid corresponding to different nonlinear dynamic systems. In general, most of chaos is a black box belonging to a given class of nonlinearities. It is often difficult to obtain accurate and faithful mathematical models, regarding their physically complex structures and hidden parameters. In this study, the chaotic mechanism with genetic algorithm (GA) is introduced into traditional CNN to construct GCNN for expecting a better opportunity of convergence a better solution. In GCNN, GA is applied for generating and refining the equations in the chaotic dynamics to harness their behaviors. In past decades, GA has been extensively studied and there are lots of newly proposed GAs. For example, the Pareto fitness GA (Elaoud, Loukil, & Teghem, 2007), case-injected GA (Louis & Miles, 2005), distributed hierarchical GA (Garai & Chaudhuri, 2007), Fuzzy GA (Lo, Chan, Wong, Rad, & Cheung, 2007), fast compact GA (Li, Wu, & Pang, 2004), etc. Among the considerable number of GAs, simple GA is the simplest one without loss of the efficiency (Goldberg, 1989). Therefore, we adopt a modified version of simple GA to refine equations in the chaotic dynamics, and that will be discussed in detail in Section 4. Using GCNN, information about the customer’s needs and their priorities can be acquired, and integrating the knowledge of domain experts the customer’s demands can be translated into the product characteristics of virtual items. The rest of paper is organized as follows: Section 2 gives an overview of related works on the QFD and CNN. Section 3 describes our EQFD method. Section 4 offers our GCNN. In Section 5, experiments with real word data are used to demonstrate the workability of our proposed methods.

In this paper, EQFD is developed for designing the virtual items of MMORPG. EQFD acquires each customer’s needs and their corresponding rankings using a GCNN approach without painstaking and time-consuming marketing interviews. Moreover, by integration GA strategy into the proposed CNN, the accurate and faithful equations in GCNN are generated and refined, and that really advances the performance of GCNN. Finally, the customer’s evaluation factors and the product characteristics of virtual items are also offered, which outline the generic character of players and virtual items in MMORPGs, respectively. Several experiments have been made, and from the experimental results one may notice that the performances of our GCNN are much better than those of NN and ACNN. Furthermore, it is also shown that GCNN based EQFD is a feasible technique to develop the virtual items while caring for the needs of each customer. Therefore, our EQFD offers a new insight into the construction of better design methods for MMORPGs in the future and provides a useful reference to the product customization design in industry. Our future research work will be on searching for more accurate equations of chaotic systems because, in this study, these equations only show the possible of orbital instability and could not generate the given orbital instability within given iterations. We will further look into the methods to generate the relationship matrix of HOQ since, in this work, these weights are acquired based on repeatedly interviewing domain experts, and these weights may include some subjective results although we have tried best to avoid that.