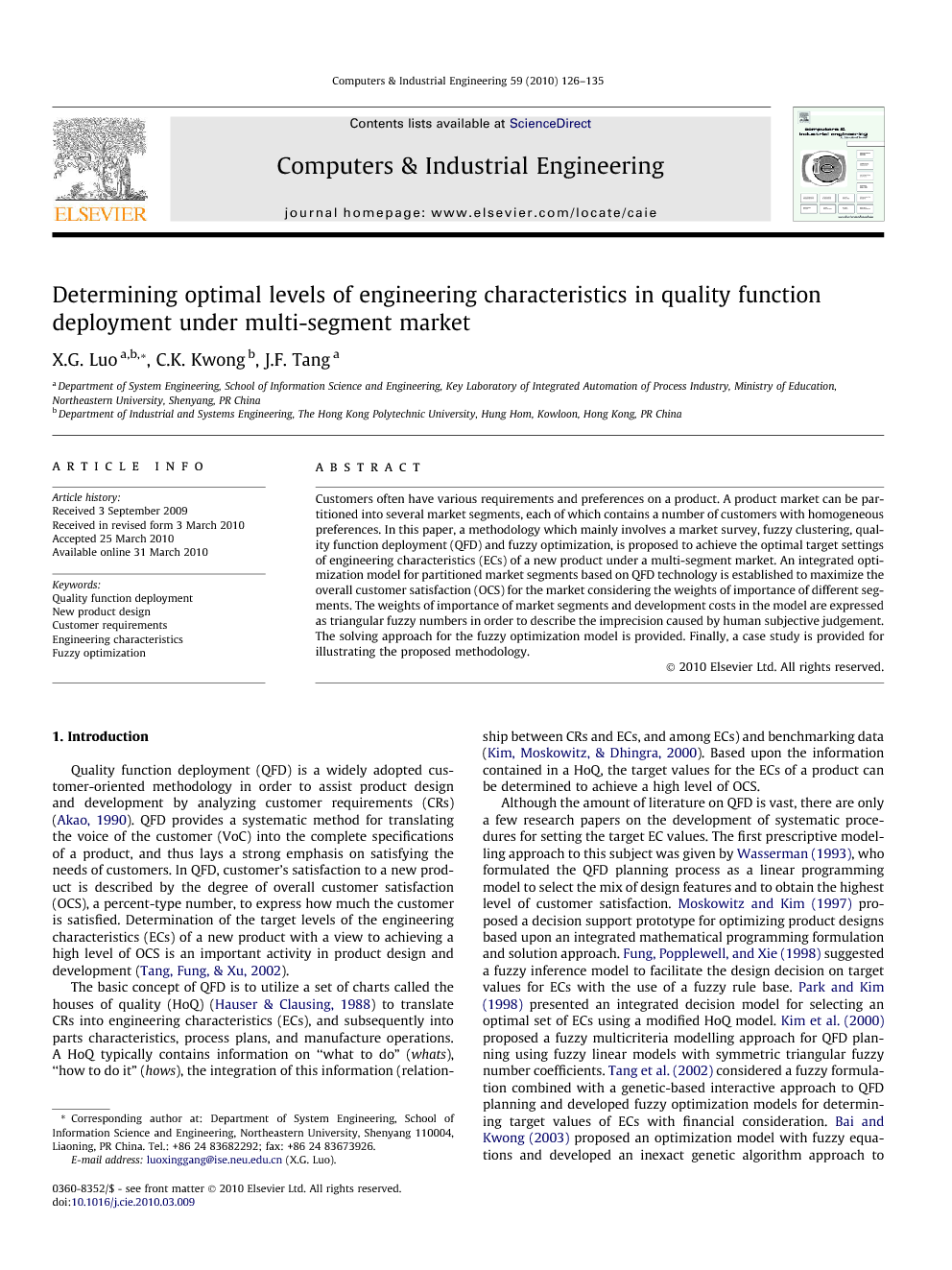 Customers often have various requirements and preferences on a product. A product market can be partitioned into several market segments, each of which contains a number of customers with homogeneous preferences. In this paper, a methodology which mainly involves a market survey, fuzzy clustering, quality function deployment (QFD) and fuzzy optimization, is proposed to achieve the optimal target settings of engineering characteristics (ECs) of a new product under a multi-segment market. An integrated optimization model for partitioned market segments based on QFD technology is established to maximize the overall customer satisfaction (OCS) for the market considering the weights of importance of different segments. The weights of importance of market segments and development costs in the model are expressed as triangular fuzzy numbers in order to describe the imprecision caused by human subjective judgement. The solving approach for the fuzzy optimization model is provided. Finally, a case study is provided for illustrating the proposed methodology.

Quality function deployment (QFD) is a widely adopted customer-oriented methodology in order to assist product design and development by analyzing customer requirements (CRs) (Akao, 1990). QFD provides a systematic method for translating the voice of the customer (VoC) into the complete specifications of a product, and thus lays a strong emphasis on satisfying the needs of customers. In QFD, customer’s satisfaction to a new product is described by the degree of overall customer satisfaction (OCS), a percent-type number, to express how much the customer is satisfied. Determination of the target levels of the engineering characteristics (ECs) of a new product with a view to achieving a high level of OCS is an important activity in product design and development (Tang, Fung, & Xu, 2002). The basic concept of QFD is to utilize a set of charts called the houses of quality (HoQ) (Hauser & Clausing, 1988) to translate CRs into engineering characteristics (ECs), and subsequently into parts characteristics, process plans, and manufacture operations. A HoQ typically contains information on “what to do” (whats), “how to do it” (hows), the integration of this information (relationship between CRs and ECs, and among ECs) and benchmarking data (Kim, Moskowitz, & Dhingra, 2000). Based upon the information contained in a HoQ, the target values for the ECs of a product can be determined to achieve a high level of OCS. Although the amount of literature on QFD is vast, there are only a few research papers on the development of systematic procedures for setting the target EC values. The first prescriptive modelling approach to this subject was given by Wasserman (1993), who formulated the QFD planning process as a linear programming model to select the mix of design features and to obtain the highest level of customer satisfaction. Moskowitz and Kim (1997) proposed a decision support prototype for optimizing product designs based upon an integrated mathematical programming formulation and solution approach. Fung, Popplewell, and Xie (1998) suggested a fuzzy inference model to facilitate the design decision on target values for ECs with the use of a fuzzy rule base. Park and Kim (1998) presented an integrated decision model for selecting an optimal set of ECs using a modified HoQ model. Kim et al. (2000) proposed a fuzzy multicriteria modelling approach for QFD planning using fuzzy linear models with symmetric triangular fuzzy number coefficients. Tang et al. (2002) considered a fuzzy formulation combined with a genetic-based interactive approach to QFD planning and developed fuzzy optimization models for determining target values of ECs with financial consideration. Bai and Kwong (2003) proposed an optimization model with fuzzy equations and developed an inexact genetic algorithm approach to solve the model that takes the mutation along the weighted gradient direction as a genetic operator. Chen, Fung, and Tang (2005) utilized the fuzzy expected value operator to model the QFD process in a fuzzy environment, and further proposed a modelling approach to determine the target value settings of ECs with the help of two fuzzy expected value models. In the abovementioned research, one of the assumptions with regard to the QFD optimization problem is that, the requirements of heterogeneous customers in a market can be generalized. For example, in a HoQ, a set of weights of importance of CRs (left of the house) are given to express the preferences of all customers towards a new product; the competition benchmarking scores (right of the house) are regarded as the perceptions of all customer’s satisfaction on the existing products. In other words, in these optimization models, the diversified CRs are simplified as shown in Fig. 1.However, customers who have different beliefs with respect to social issues (e.g., religion, politics, work, drugs, women’s right) or personal interests (e.g., family, home, job, food, self-achievement, health, clubs, friends, shopping) may have different purchasing behaviour or preferences (Urban & Hauser, 1993). Consequently, customers in a product market may have different responses towards a new product. Therefore, heterogeneity of customers should be introduced into QFD optimization models to describe the relationship between CRs and ECs and to model the OCS towards a product. Eventually, the maximum OCS for homogeneous customers in a market can be achieved in a more reasonable way. In this research, we propose a new methodology for determining the optimal levels of ECs in QFD under a product market with heterogeneous customers. The basic idea of this methodology is described as follows: (1) a market survey towards the product is performed; (2) the market is partitioned into several segments based on the survey data by using fuzzy C-means clustering analysis; (3) a fuzzy optimization model for all market segments is established to obtain the optimal value settings of ECs. The objective of the model is to maximize the OCS of the whole market considering the weights of importance of the market segments; (4) the fuzzy optimization model is transformed into a linear programming model and eventually solved by simplex methods. The rest of this paper is organized as follows. Section 2 proposes a QFD-based methodology for determining optimal levels of ECs in QFD under a multi-segment market. In Section 3, a mathematical model using QFD optimization technology is derived to maximize the OCS for the market. Imprecision of parameters in the model is also considered and the solving approach of the fuzzy linear programming model is described. Section 4 provides a case study to illustrate the proposed methodology. Finally, conclusions are drawn in Section 5.

In this research, a methodology for determining the optimal levels of ECs in QFD under a multi-segment market is proposed. Based on the discussions made in this paper, the following points can be summarized and concluded: (1) Different from the existing QFD approaches, the proposed methodology suggests partitioning the product market into several segments, each of which contains a number of customers with homogeneous preferences. Therefore, the methodology can be applied to a product market with diversified customer requirements. It can be considered as a necessary extension of the existing QFD optimization approaches. (2) A mathematical model is established to obtain the optimal levels of ECs in QFD under a multi-segment market. Each segment has individual contribution to the OCS for the whole market; hence hopefully a more reasonable set of value settings of ECs can be achieved. (3) Due to the imprecision caused by the human subjective judgement, the numbers of customers in market segments and development costs are expressed as triangular fuzzy numbers in the mathematical model. Lai and Hwang’s (1992) approach is used to transform the possibilistic linear programming model to a crisp model. The consideration of fuzziness in modeling increases the usability of the proposed methodology in practical scenario.