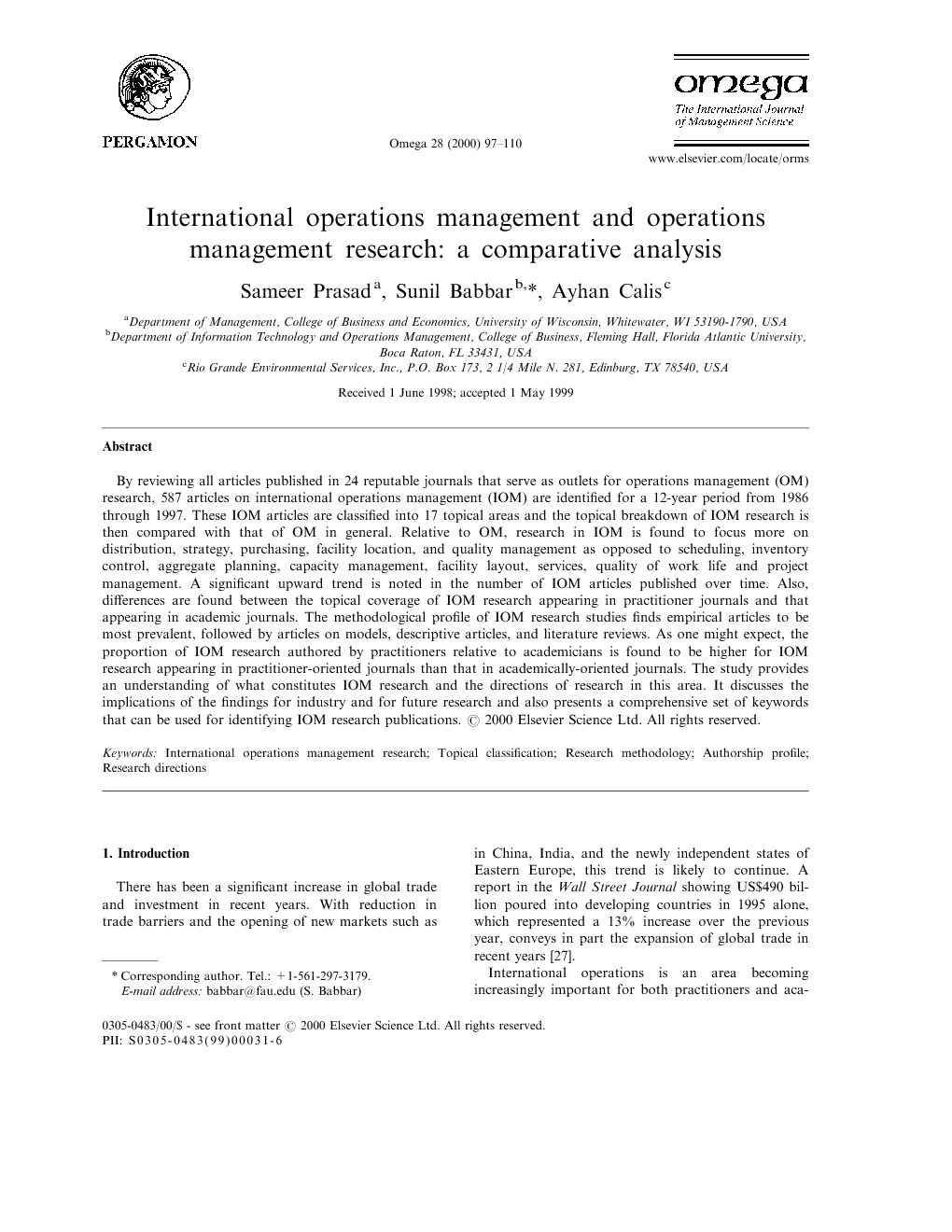 By reviewing all articles published in 24 reputable journals that serve as outlets for operations management (OM) research, 587 articles on international operations management (IOM) are identified for a 12-year period from 1986 through 1997. These IOM articles are classified into 17 topical areas and the topical breakdown of IOM research is then compared with that of OM in general. Relative to OM, research in IOM is found to focus more on distribution, strategy, purchasing, facility location, and quality management as opposed to scheduling, inventory control, aggregate planning, capacity management, facility layout, services, quality of work life and project management. A significant upward trend is noted in the number of IOM articles published over time. Also, differences are found between the topical coverage of IOM research appearing in practitioner journals and that appearing in academic journals. The methodological profile of IOM research studies finds empirical articles to be most prevalent, followed by articles on models, descriptive articles, and literature reviews. As one might expect, the proportion of IOM research authored by practitioners relative to academicians is found to be higher for IOM research appearing in practitioner-oriented journals than that in academically-oriented journals. The study provides an understanding of what constitutes IOM research and the directions of research in this area. It discusses the implications of the findings for industry and for future research and also presents a comprehensive set of keywords that can be used for identifying IOM research publications.

There has been a significant increase in global trade and investment in recent years. With reduction in trade barriers and the opening of new markets such as in China, India, and the newly independent states of Eastern Europe, this trend is likely to continue. A report in the Wall Street Journal showing US$490 billion poured into developing countries in 1995 alone, which represented a 13% increase over the previous year, conveys in part the expansion of global trade in recent years [27]. International operations is an area becoming increasingly important for both practitioners and academicians today. In keeping with Wheelwright and Hayes' [28] fourth stage in the strategic role of operations, international operations play an important role in shaping the corporate strategies of an increasing number of firms today. While many have examined research directions in the OM literature [1], [6], [8], [9], [12], [15], [16], [17], [23] and [26], only a few [2], [5], [11], [21] and [25] have undertaken to assess parts of the international operations management (IOM) literature including international purchasing, logistics, inventory management, technology management, and networks. No study has examined the collective body of IOM research literature from recent years. By examining a substantive body of the IOM research literature from the past 12 years, this study undertakes to shed some light on IOM research in general and to contrast the IOM research literature with that of OM, and the IOM research by academicians with that by practitioners. More specifically, the objectives of this study are to: 1. Define what constitutes IOM research and provide a list of keywords for identifying IOM research publications. 2. Classify IOM research articles as either academic or practitioner publications. 3. Explore the trend in the frequency of IOM research publications. 4. Compare the topical breakdown of IOM research with that of OM in general, and test for differences in emphasis between the two. 5. Explore the practitioner- and academic-intensity in authorship of IOM research. 6. Classify the IOM research articles as academic or practitioner publications and test for differences in topical coverage between academic and practitioner outlets. 7. Present a methodological profile of the IOM research literature. This paper is organized as follows. First, we discuss how our data was collected, categorized, and analyzed. Results of the analysis are then presented. Following the patterns identified by the results, a discussion on the particular aspects of international operations management research is also presented. Finally, in Section 4, the key findings and their implications are briefly summarized.

In reviewing the IOM literature from the past 12 years, we hope this study contributes to a better understanding of the directions in IOM research. A comprehensive list of keywords for identifying IOM research publications is also presented in this study. It is encouraging to note that the most recent years, in particular 1996 and 1997, have seen a dramatic increase in IOM research. Nevertheless, over the 12-year period, less than 3% of all articles published across the 24 journals examined were IOM research articles. The International Journal of Operations and Production Management and Production and Inventory Management Journal led the academic and practitioner journals respectively in their dissemination of IOM research. It is hoped that more journals, both academic and practitioner, will become major players in the years to come. With national boundaries meaning little when it comes to where what gets produced, a better understanding of the international context and operations in different parts of the world increasingly becomes a fundamental and important requisite for the long term prosperity and growth of business firms. The comparison of research directions in IOM and OM was quite revealing. The areas of distribution, strategy, purchasing, facility location, work measurement, and quality received more attention in IOM research relative to OM. On the other hand, the areas of inventory control, scheduling, aggregate planning, project management, quality of work life, facility layout, capacity planning, and services received lesser attention in IOM research relative to that in OM. In areas which have received relatively less attention in the IOM literature, researchers have the potential to create seminal works by identifying key variables and defining meaningful constructs for industry. Research efforts in areas that have received less attention in the IOM literature thus far can be furthered by journal editors dedicating special future issues of their journals to areas deserving of attention. The research agenda for these areas can also be shaped through designated panel discussions and special sessions at national and international conferences in the field of operations management. As one might expect, the ratio of practitioner to academic authorship was much higher for IOM research that appeared in practitioner-oriented journals and was about twice that for IOM research that appeared in academically-oriented journals. While academic institutions continue to expect and produce more research by the year, greater participation by practitioners, especially in research appearing in academic journals, can help better ground the theory building effort in the area. This study also identifies the practitioner-intensity of authorship of IOM research by topic area. Since practitioners are uniquely qualified in bringing forth real-world problems they face in industry, academicians can review the research works authored by practitioners to identify problem issues in industry and to uncover potentially valuable topics for future research. Differences were noted in the topical coverage of research appearing in practitioner journals relative to that in academic journals. The areas of purchasing, inventory management and quality received greater coverage in practitioner journals, whereas the areas of process design, strategy, facility location and aggregate planning were more extensively covered in academic journals. Finally, empirical research accounted for nearly 39% of all IOM articles published over the recent 12-year period in the set of 24 journals reviewed for this study. It is hoped that in the future researchers will concentrate even more on building and empirically testing theory on IOM. Such efforts should help provide the type of understanding needed to effectively manage operations in a global economy.