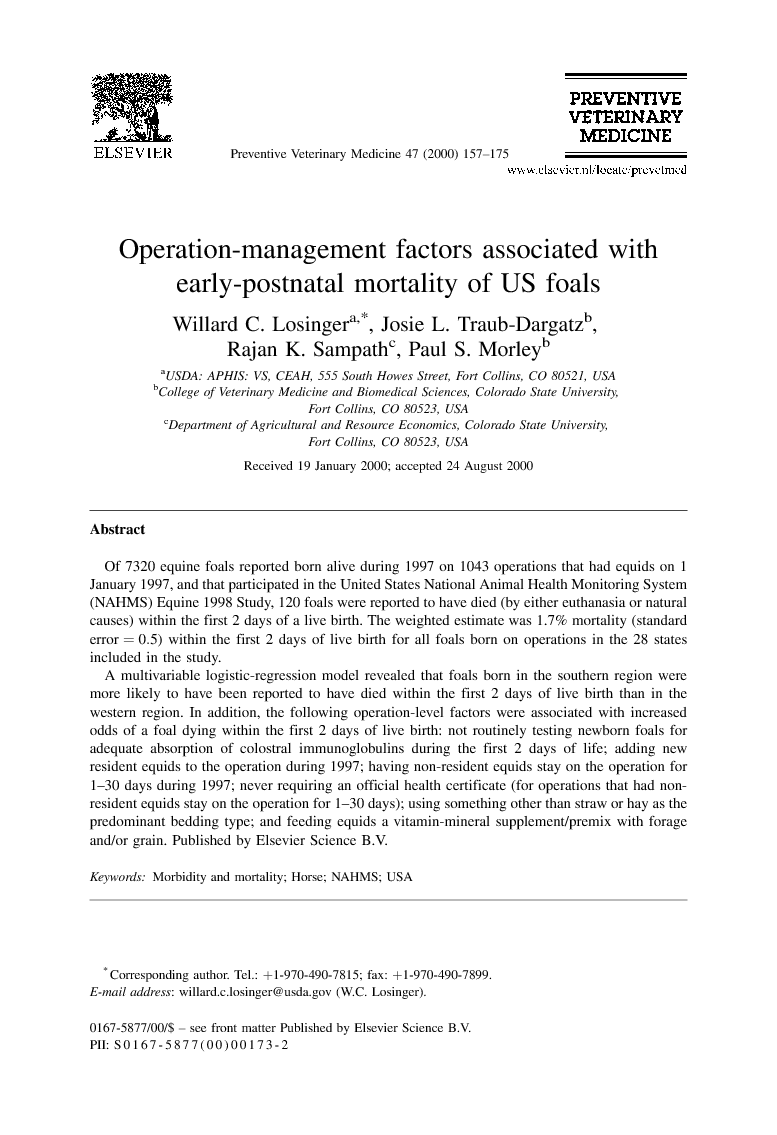 The objective of equine breeders is to produce healthy foals that will grow to fulfill their aimed purpose. The neonatal period is a critical phase in an equid’s life. Morley and Townsend (1997) reported that 5% of Thoroughbred foals died within 2 weeks of birth in four western-Canadian provinces. In a prospective study of foal health and management in Texas, Cohen (1994) stated that the risk of death in foals decreased with age, and was highest during the first 7 days of life. Haas et al. (1996) found that 74% of foal deaths occurred within 48 h of parturition in a large mare herd in Manitoba. The results of the National Animal Health Monitoring System (NAHMS) Equine 1998 Study of the United States Department of Agriculture (USDA) estimated that 1.7% of foals born alive either died of natural causes or were euthanized within 2 days of birth in the United States during 1997 (USDA, 1998a). Conditions or agents that have been described as causes of foal mortality include congenital anomalies (von Matthiessen, 1993, Campbell-Beggs et al., 1995, Doige, 1996 and Theoret et al., 1997), equine herpesvirus infection (Dixon et al., 1978), exposure of the pregnant mare to fescue toxicosis (Putnam et al., 1991; Cross et al., 1995), failure of colostral immunoglobulin transfer to foals (McGuire et al., 1977), septicemia (Carter and Martens, 1986), haemorrhage from the umbilicus (Haas et al., 1996), diarrhea (Cohen, 1994), pneumonia (Prescott et al., 1989), trauma (Cohen, 1994), and starvation/exposure (Haas et al., 1996). Only a few studies have examined risk factors involved in early post-natal foal mortality. Cohen (1994) did not identify factors that were significantly associated with foal mortality-possibly because the low number of deaths observed in his study limited the power. Haas et al. (1996) found that failure of passive transfer, poor mothering ability, dystocia, low birth weight, lack of rainfall and low environmental temperatures were associated with foal death on a pregnant-mare operation in Manitoba. However, their study population was atypical of United States equine populations in that assistance to foals was minimal and foal mortality was quite high (22% before reaching 10 days of age) (Haas et al., 1996). The purpose of this investigation was to identify management and other operation-level factors that were associated with foal death within 2 days of live birth in the United States during 1997, based on data from the NAHMS Equine 1998 Study.