عنوان انگلیسی
Worlds apart? — a look at the operations management area in the US, UK and Scandinavia
دانلود فوری مقاله + سفارش ترجمه 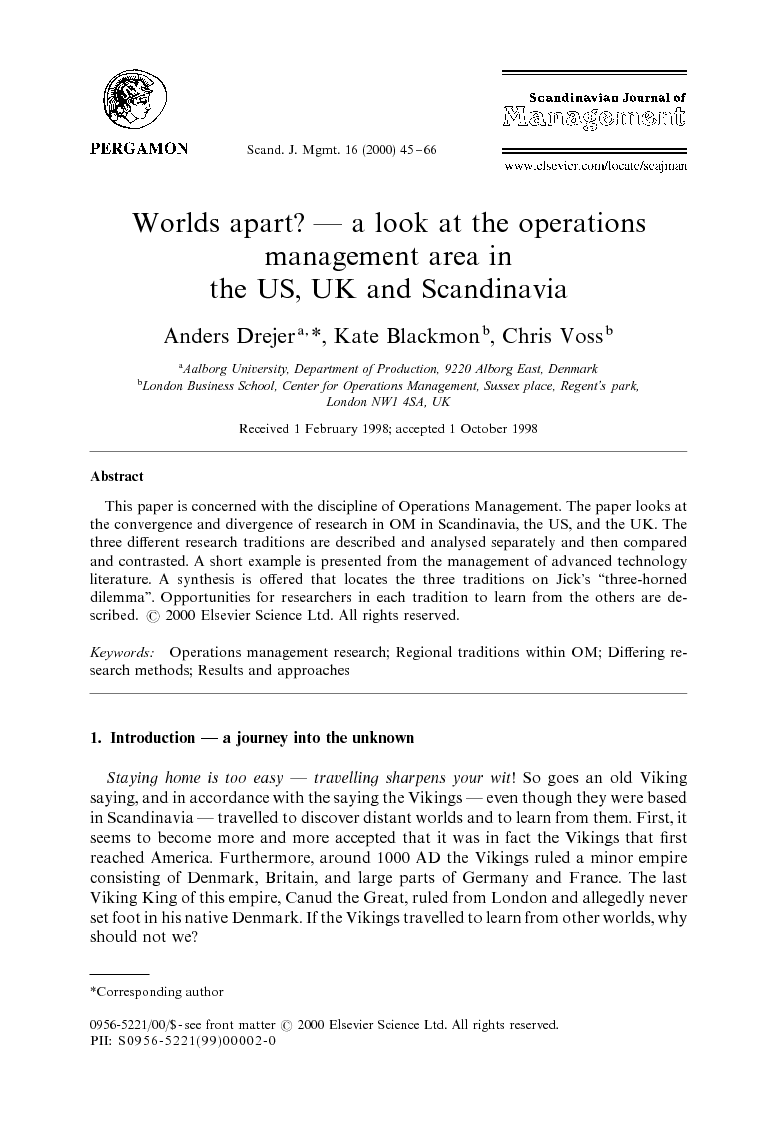 This paper is concerned with the discipline of Operations Management. The paper looks at the convergence and divergence of research in OM in Scandinavia, the US, and the UK. The three different research traditions are described and analysed separately and then compared and contrasted. A short example is presented from the management of advanced technology literature. A synthesis is offered that locates the three traditions on Jick’s “three-horned dilemma”. Opportunities for researchers in each tradition to learn from the others are described.

Staying home is too easy 2 travelling sharpens your wit! So goes an old Viking saying, and in accordance with the saying the Vikings*even though they were based in Scandinavia*travelled to discover distant worlds and to learn from them. First, it seems to become more and more accepted that it was in fact the Vikings that "rst reached America. Furthermore, around 1000 AD the Vikings ruled a minor empire consisting of Denmark, Britain, and large parts of Germany and France. The last Viking King of this empire, Canud the Great, ruled from London and allegedly never set foot in his native Denmark. If the Vikings travelled to learn from other worlds, why should not we? In this paper, we will use the old Viking saying to inspire us to another discovery of America, Britain, and Scandinavia*albeit our journey will be con"ned to the world of operations management (OM) and be a journey of books and papers. In other words, we will investigate the world of OM and attempt to "nd out what the di!erences are between the US, UK and Scandinavian OM tradition, and * in the spirit of the Vikings*attempt to see what the di!erent traditions can learn from each other. And, there are di!erent traditions in science in general. Kuhn (1962) has provided a large part of the explanation for the phenomenon that certain groups of researchers seem to think alike. In Kuhn's terminology, this shared thinking is because the researchers share the same &&paradigm'', i.e., the same basic assumptions about science, the object of their science, etc. We will take this as our starting point, but also subscribe to Lakatos (1968), who has suggested that several paradigms can coexist at the same time within a discipline * there does not have to be one overall paradigm guiding all research, even in times of relative ease in the scienti"c world of a certain discipline (Andersen et al., 1990). In other words, a discipline can be divided into many di!erent groups (some stronger than others) that each have their unique approach to the discipline in question. In OM, Chris Voss has applied this way of thinking to the discipline and attempted to describe di!erent paradigms within the OM area (Voss, 1995a). In this paper, we will focus on the approaches to OM that can be found in our respective originating countries and, hence, focus on the UK, the US, and Scandinavia. There are, however, other good reasons for focusing on the UK, the US and Scandinavia than that the authors of this paper originate in these three regions. There are distinctively di!erent approaches to OM in the three regions*one can speculate about demographic reasons (e.g. the US is much larger than Scandinavia), cultural reasons (e.g. Scandinavian researchers feel very strongly that they must justify their existence by &&solving'' problems for "rms/managers), historical reasons (e.g. the UK has many traditions from her long imperial history), and many others. Another good reason is that, despite the fact that the traditions are di!erent, they still have a lot to o!er each other. We shall show this later in the paper. For now, the reader must take our word for it. The very purpose of this paper is, thus, to analyse three di!erent traditions within OM in order to see in which ways they di!er and how they may bene"t each other. Inherent in this purpose is the assumption that di!erent traditions within a given area should not "ght each other, but instead try to create a dialogue. If the truth about, say, OM is so complex that it is possible (or even necessary) to form di!erent assumptions about it, and hence di!erent traditions to its study, then the truth is probably also so complex that there is not just one tradition that possesses the entire truth. In other words, each tradition * we assume in this paper * only holds part of the truth and could bene"t from a dialogue with other traditions. Only by combining the perspectives of di!erent traditions can we hope to get just a little closer to the truth about OM. Creating this dialogue is not an easy task * far from it. Each tradition has its own conferences, workshops, journals and other forums, but here are very few possibilities for airing such cross-disciplinary work as this. However, we feel that it is worth a try and would like to aspire to a dialogue about OM rather than tell the ultimate story of OM.

management and the approach to conducting research management used by North American, British, and Scandinavian researchers di!er, yet are not incommensurate. The Scandinavian and American traditions di!er the most * they take opposite directions on research methods (case versus survey) and on generalisability (strong emphasis on contingency versus none). The British tradition seems to be located somewhere in the middle between the other two * with its emphasis on combining research methods and on * more or less * general solutions. The outlined di!erences are consistent with di!erences among the three approaches across a much broader range of the production management literature (and indeed perhaps a much wider range of social sciences research). Whilst the research engendered under each paradigm will vary, each tradition has much to learn from the other, and, conceivably, such cross-fertilisation would lead to major breakthroughs and advances in our research "eld. This is so because of the very nature of (operations) management research, where individual studies cannot hope to be as &&true'' as studies within (parts of) the Natural Sciences. By &&true'' we refer to the elements in Jick's model * true results are general, realistic and precise. In order to achieve this aim, management research must engage in a dialogue between researchers from di!erent traditions * in terms of Jick's model, North Americans, British, and Scandinavians have much to learn from each other. In a more practical sense, how can researchers in one tradition learn from each other? One way is the physical exchange of researchers, which may be especially e!ective in the early stages of one's career. Whilst one way of experiencing another tradition is to do one's doctorate in another education, this is not the only way. For example, James G. March's Scancor initiative at Stanford University has provided the opportunity for dozens of Scandinavian researchers to spend a period of time within the American system. Within Europe, the European Union is currently sponsoring transfers of researchers among institutions through a number of di!erent programmes, as well as funding collaborative research e!orts between researchers in di!erent countries. Finally, sabbaticals and visiting professorships may be useful at later stages of one's career. Another option is to use the possibilities for communication o!ered by the internet and new IT solutions to create a more open (and open-minded) research community. This may prove to be a valuable supplement to personal contacts between researchers, exchange of researchers, and so on. There may be many other options, but to us the most important thing that must be done in order to create and secure a dialogue of research in (operations) management is for individual researchers to acknowledge and accept the limitations of their own work. Only by doing so will their eyes and minds open for new impressions and alternative interpretations.