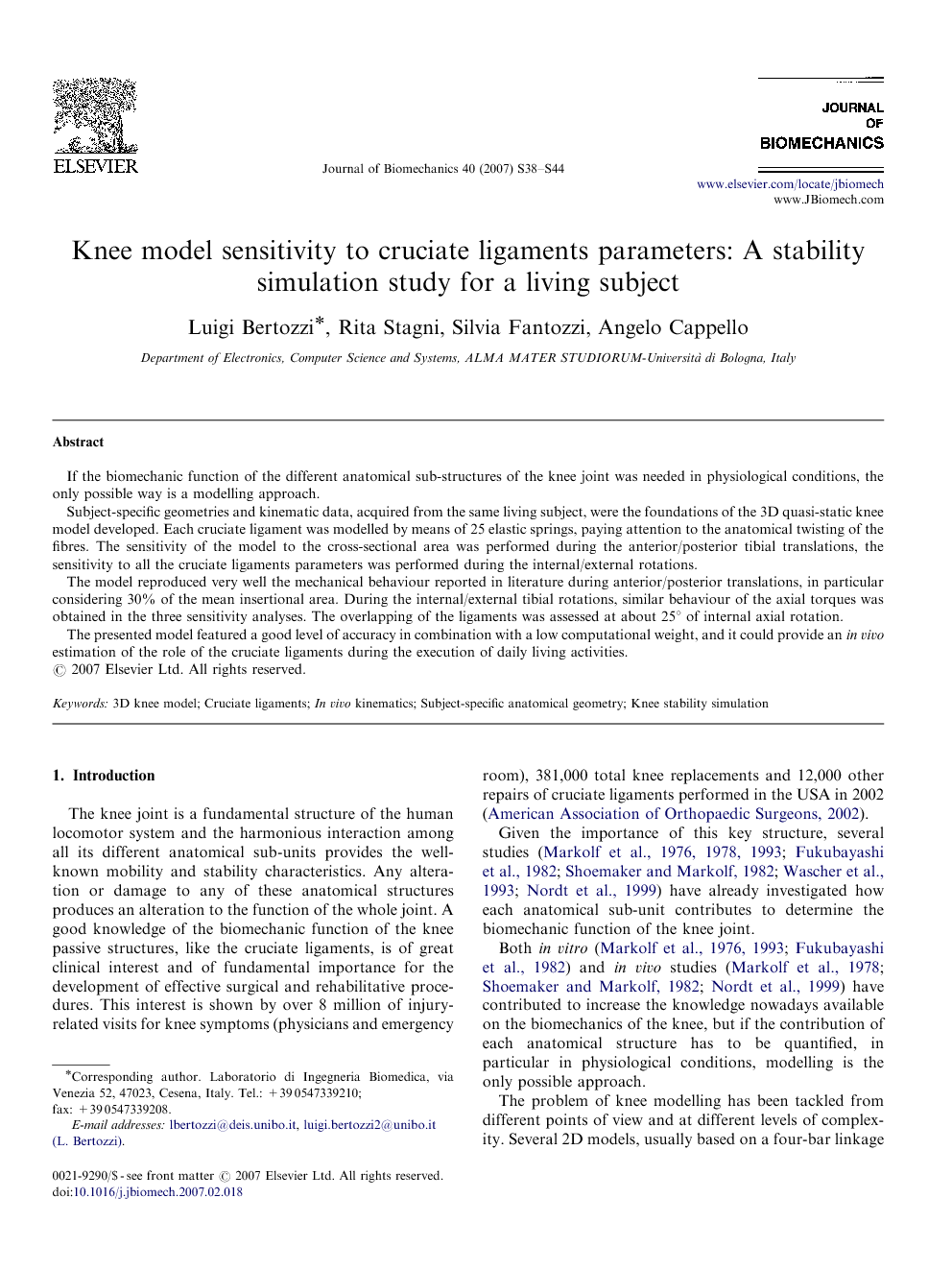 If the biomechanic function of the different anatomical sub-structures of the knee joint was needed in physiological conditions, the only possible way is a modelling approach. Subject-specific geometries and kinematic data, acquired from the same living subject, were the foundations of the 3D quasi-static knee model developed. Each cruciate ligament was modelled by means of 25 elastic springs, paying attention to the anatomical twisting of the fibres. The sensitivity of the model to the cross-sectional area was performed during the anterior/posterior tibial translations, the sensitivity to all the cruciate ligaments parameters was performed during the internal/external rotations. The model reproduced very well the mechanical behaviour reported in literature during anterior/posterior translations, in particular considering 30% of the mean insertional area. During the internal/external tibial rotations, similar behaviour of the axial torques was obtained in the three sensitivity analyses. The overlapping of the ligaments was assessed at about 25° of internal axial rotation. The presented model featured a good level of accuracy in combination with a low computational weight, and it could provide an in vivo estimation of the role of the cruciate ligaments during the execution of daily living activities.

The knee joint is a fundamental structure of the human locomotor system and the harmonious interaction among all its different anatomical sub-units provides the well-known mobility and stability characteristics. Any alteration or damage to any of these anatomical structures produces an alteration to the function of the whole joint. A good knowledge of the biomechanic function of the knee passive structures, like the cruciate ligaments, is of great clinical interest and of fundamental importance for the development of effective surgical and rehabilitative procedures. This interest is shown by over 8 million of injury-related visits for knee symptoms (physicians and emergency room), 381,000 total knee replacements and 12,000 other repairs of cruciate ligaments performed in the USA in 2002 (American Association of Orthopaedic Surgeons, 2002). Given the importance of this key structure, several studies (Markolf et al., 1976, Markolf et al., 1978 and Markolf et al., 1993; Fukubayashi et al., 1982; Shoemaker and Markolf, 1982; Wascher et al., 1993; Nordt et al., 1999) have already investigated how each anatomical sub-unit contributes to determine the biomechanic function of the knee joint. Both in vitro ( Markolf et al., 1976 and Markolf et al., 1993; Fukubayashi et al., 1982) and in vivo studies (Markolf et al., 1978; Shoemaker and Markolf, 1982; Nordt et al., 1999) have contributed to increase the knowledge nowadays available on the biomechanics of the knee, but if the contribution of each anatomical structure has to be quantified, in particular in physiological conditions, modelling is the only possible approach. The problem of knee modelling has been tackled from different points of view and at different levels of complexity. Several 2D models, usually based on a four-bar linkage model, were proposed in the literature (Zavatsky and O’Connor, 1992a and Zavatsky and O’Connor, 1992b; Gill and O’Connor, 1996; Lu and O’Connor, 1996; Zavatsky and Wright, 2001). The aim of these models was often to investigate the function of the knee ligaments in the sagittal plane, regarding simple loading conditions (Zavatsky and O’Connor, 1993; Shelburne and Pandy, 1997). 3D mathematical and finite elements models were also developed (Wismans et al., 1980; Blankevoort et al., 1991; Mommersteeg et al., 1997; Moglo and Shirazi-Adl, 2005). These more complex models allowed to consider also anatomical articular surfaces, contact forces, articular deformations, different passive structures, like ligaments, capsule and menisci and active structures like muscles. However, because of their computational weights, these complex models could be applied only in simple loading conditions and not in a physiological context. The logical evolution of this approach could be the evaluation of a 3D model during the execution of a motor task characteristic of daily living activity (Piazza and Delp, 2001; Stagni et al., 2004). In this context, even if the model is designed properly for a specific application, its potential can be nullified by the errors consequent to inappropriate or inaccurate parameters definitions. Indeed, these errors were often due to disagreement in the origin of the parameters and inputs, obtained from different and non-homogeneous sources (Piazza and Delp, 2001). In order to limit this kind of errors, the foundations of the 3D quasi-static model proposed in the present paper were the acquisition from a single selected living subject of the subject-specific anatomical geometries and the in vivo kinematic data. Special attention was paid to the geometrical and the mechanical parameters of the cruciate ligaments. The cross-sectional area and the reference length were estimated by means of subject-specific nuclear magnetic resonance (NMR) and 3D video-fluoroscopy, respectively. The elastic modulus of the cruciate ligament is a critical parameter to evaluate, even by means of direct in vitro measurements. Since a subject-specific elastic modulus evaluation could not be obtained in in vivo conditions, experimental measurements reported in the literature were considered to set the parameters of the model (Butler et al., 1992; Race and Amis, 1994). In a previous work (Bertozzi et al., 2006a), the authors used the same knee model in order to evaluate the mechanical response during the anterior/posterior (A/P) drawer test, rating the sensitivity with respect to the two most critical mechanical parameters of the cruciate ligaments: the reference length and the elastic modulus parameters. Different behaviours were obtained by varying the two mechanical parameters: the reference length influenced more the laxity of the knee model, whereas the elastic modulus tended to modify the stiffness at definite levels of anterior or posterior forces. Regarding the laxity, good fittings were obtained and considering variations in the range of ±5% of the in vitro estimated value similar variability was observed. The anterior and the posterior stiffnesses resulted often bigger than the experimental measurements, in particular the simulated anterior stiffness was about three times larger than the experimental one. The cause of these overestimations was attributed to an overestimation of the cross-sectional area. According to Harner et al. (1999), a similar factor linked the ligament insertion area, or rather the cross-sectional area value considered as cruciate parameter of the cruciate ligaments, with the mid-substance cross-sectional area, or rather the actual value had to be considered. The present work was focused on the evaluation of the sensitivity of the devised knee model with respect to the cross-sectional area parameter during the A/P translation of the tibia. Furthermore, the sensitivities of the model with respect to all mechanical parameters of the cruciate ligaments: reference length, elastic modulus and cross-sectional area were also performed during the simulation of the axial rotation of the tibia. The results were analysed and compared with several experimental works aiming to quantify forces and torques during the A/P translations and the axial rotations published in the literature (Kennedy and Fowler, 1971; Markolf et al., 1976, Markolf et al., 1978 and Markolf et al., 1984; Piziali and Rastegar, 1977b; Butler et al., 1980; Piziali et al., 1980; Seering et al., 1980; Fukubayashi et al., 1982; Bargar et al., 1983; Kochan et al., 1984; Shoemaker and Markolf, 1985).