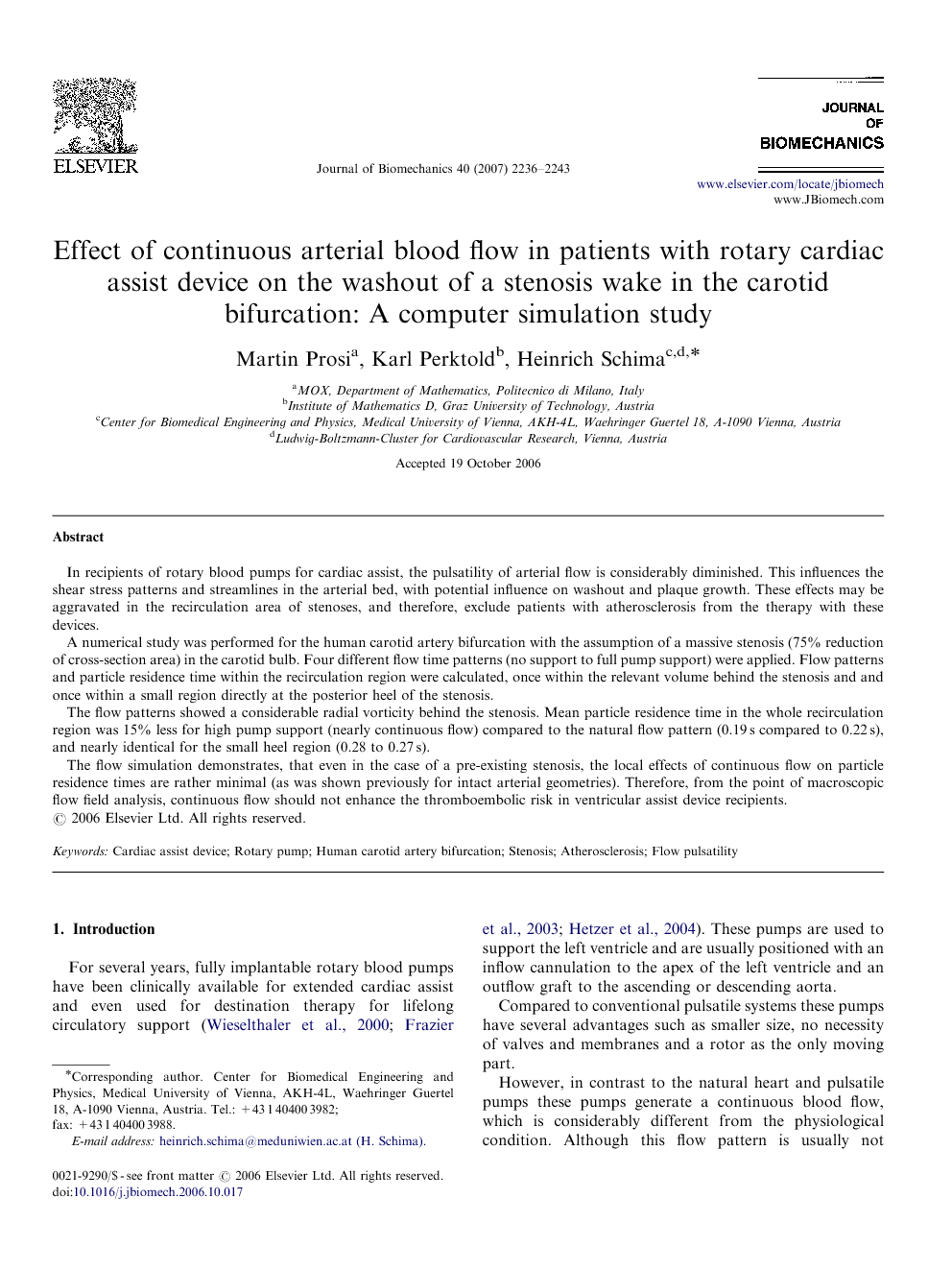 In recipients of rotary blood pumps for cardiac assist, the pulsatility of arterial flow is considerably diminished. This influences the shear stress patterns and streamlines in the arterial bed, with potential influence on washout and plaque growth. These effects may be aggravated in the recirculation area of stenoses, and therefore, exclude patients with atherosclerosis from the therapy with these devices. A numerical study was performed for the human carotid artery bifurcation with the assumption of a massive stenosis (75% reduction of cross-section area) in the carotid bulb. Four different flow time patterns (no support to full pump support) were applied. Flow patterns and particle residence time within the recirculation region were calculated, once within the relevant volume behind the stenosis and and once within a small region directly at the posterior heel of the stenosis. The flow patterns showed a considerable radial vorticity behind the stenosis. Mean particle residence time in the whole recirculation region was 15% less for high pump support (nearly continuous flow) compared to the natural flow pattern (0.19 s compared to 0.22 s), and nearly identical for the small heel region (0.28 to 0.27 s). The flow simulation demonstrates, that even in the case of a pre-existing stenosis, the local effects of continuous flow on particle residence times are rather minimal (as was shown previously for intact arterial geometries). Therefore, from the point of macroscopic flow field analysis, continuous flow should not enhance the thromboembolic risk in ventricular assist device recipients.

For several years, fully implantable rotary blood pumps have been clinically available for extended cardiac assist and even used for destination therapy for lifelong circulatory support (Wieselthaler et al., 2000; Frazier et al., 2003; Hetzer et al., 2004). These pumps are used to support the left ventricle and are usually positioned with an inflow cannulation to the apex of the left ventricle and an outflow graft to the ascending or descending aorta. Compared to conventional pulsatile systems these pumps have several advantages such as smaller size, no necessity of valves and membranes and a rotor as the only moving part. However, in contrast to the natural heart and pulsatile pumps these pumps generate a continuous blood flow, which is considerably different from the physiological condition. Although this flow pattern is usually not absolutely constant because of a modulation by the remaining contractility of the supported left ventricle, it is still far less pulsatile than the natural flow pattern in the aortic root (Potapov et al., 2000; Thohan et al., 2005). Typical values of flow observed in the early postoperative phase are in the range of 3–5 L/min with a pulsatility of ±1–3 L/min, resulting in a systolic/diastolic aortic pressure difference of typically 5–15 mmHg. This flow and pressure pulsatility usually increases after recovery of the decompensated heart, but never regains the physiological pulsatility levels. Therefore, in the early stage of development, there were considerable objections concerning the long-term compatibility of this modified flow with organ function (Thalmann et al., 2005). The clinical experience with long-term implants, which started in 1998, proved the practicability of these devices, their potential for organ recovery and the rehabilitation of patients to excellent quality of life (Wieselthaler et al., 2001; Hetzer et al., 2004). There is no randomized clinical study between pulsatile and continuous devices available yet, but in anecdotal reports the vascular related risks from pulsatile and continuously working pumps seem to be rather comparable. To improve understanding of the modified vascular flow patterns, a numerical simulation study for the carotid artery has been carried out and it was found, that due to secondary flow effects in the radial plane even critical regions such as the carotid bulb does not trap the blood: a spiral washout ensures that particle residence time gets only 20% extended under full pump support (Schima et al., 2003). However, this first numerical study did not address the important clinical question, if such washout would also exist in arteries with already existing atherosclerotic lesions. A missing washout downstream from stenotic obstructions would probably exclude patients with preoperative atherosclerosis for the application of rotary pumps. Therefore, we investigated the effects of continuous flow on a carotid artery with severe stenosis. In the following, the results for local flow, shear and washout are presented in their dependency of changing pulsatility for various degrees of continuous pump support.

Rotary blood pumps have been implanted for several years with good clinical success. Potential disadvantages of continuous flow have been discussed intensively, but in clinical practice the performance of these pumps has been on the whole comparable to pulsatile systems (Thalmann et al., 2005; Thohan et al., 2005). Patients with preoperatively existing atherosclerosis, however, may be particularly susceptible to effects of continuous flow, due to changed shear and washout effects in the surroundings of atherosclerotic stenoses and wall lesions. Alterations and inconsistencies in the flow field, however, may trigger further growth of atherosclerotic plaque, or deposition of thrombotic material (Henry and Chen, 1993; Wootton and Ku, 1999; Stangeby and Ethier, 2002). Obviously, flow patterns in the arterial tree are changed considerably by alterations of pulsatility: Both this study and our previous one on the non-stenosed physiologic geometry (Schima et al., 2003) show that the borderlines of flow separation and the local values of shear stress change considerably with changing amplitudes in the mean flow pattern. However, some findings seem to be even favourable for pump support: flow separation (which is usually considered undesirable for the health of the vascular wall) occurs less frequently with continuous flow, and the areas of flow reversal are considerably smaller for the pump applied. Also jet effects in a narrow stenotic orifice, which are triggered by the elevated flow during systole and which may lead to wall lesions far distal from the stenosis itself, are diminished or even absent during continuous support. Nevertheless, areas of flow reversal do not completely disappear with continuous flow. Particularly in poststenotic regions with sudden widening of the vessel diameter, reversal of the axial velocity occurs. In the longitudinal view of streamlines, such persistent reversal suggests a lasting eddy with permanently trapped particles. The secondary radial flow, however, causes a spiral washout of these eddies, which cause an exchange of blood particles. This can be proven by calculation of particle residence times. The residence time only slightly increases compared with the pulsatile condition, as already seen earlier for the far less challenging condition of the non-stenosed geometry. Thus the results indicate that, even in patients with considerable stenotic lesions, the continuous flow does not lead to permanent trapping of blood constituents within eddies. However, this interesting finding must be interpreted with great care due to the following limitations: First, the number of calculated entrapped particles is still small compared to the overall number of particles in the fluid (see Table 1, only up to 129 of 5000 “released” particles entered the small observation area). Therefore, the calculation could not be done for microscopically small virtual volumes, but only for two virtual volumes, each with considerable size. If the volumes of entrapment were chosen smaller, the relation between entrapped particles and overall calculated particles would cause excessive computer calculation time. Smaller volumes however may lead to somewhat different results. Second, the chosen geometry is only one typical out of possible shapes of atherosclerotic lesions with a smooth surface. In surgical practice and at autopsies, not only smooth lipid-like, but also rough chalk-like surfaces are observed. Also, the model is not, of course, designed to consider changes in the microvasculature of atherosclerotic patients. Third, the influences of flow geometry, local shear stress and particle residence time on the development of atherosclerosis and eventual thrombotic superpositions are only partially known and cannot be quantified at the current state (Malek et al., 1999). Therefore, the result of this study cannot be interpreted as a “carte blanche” for the application of rotary pumps in patients with severe atherosclerosis, but it does not indicate a prohibitive contradiction due to macroscopic flow field patterns to apply to these new promising devices. In any case, if physicians decide to apply rotary pumps in this cohort of patients, a careful observation of clinical implantation results in this patient group will be required to exclude the potential of clinical hazards.