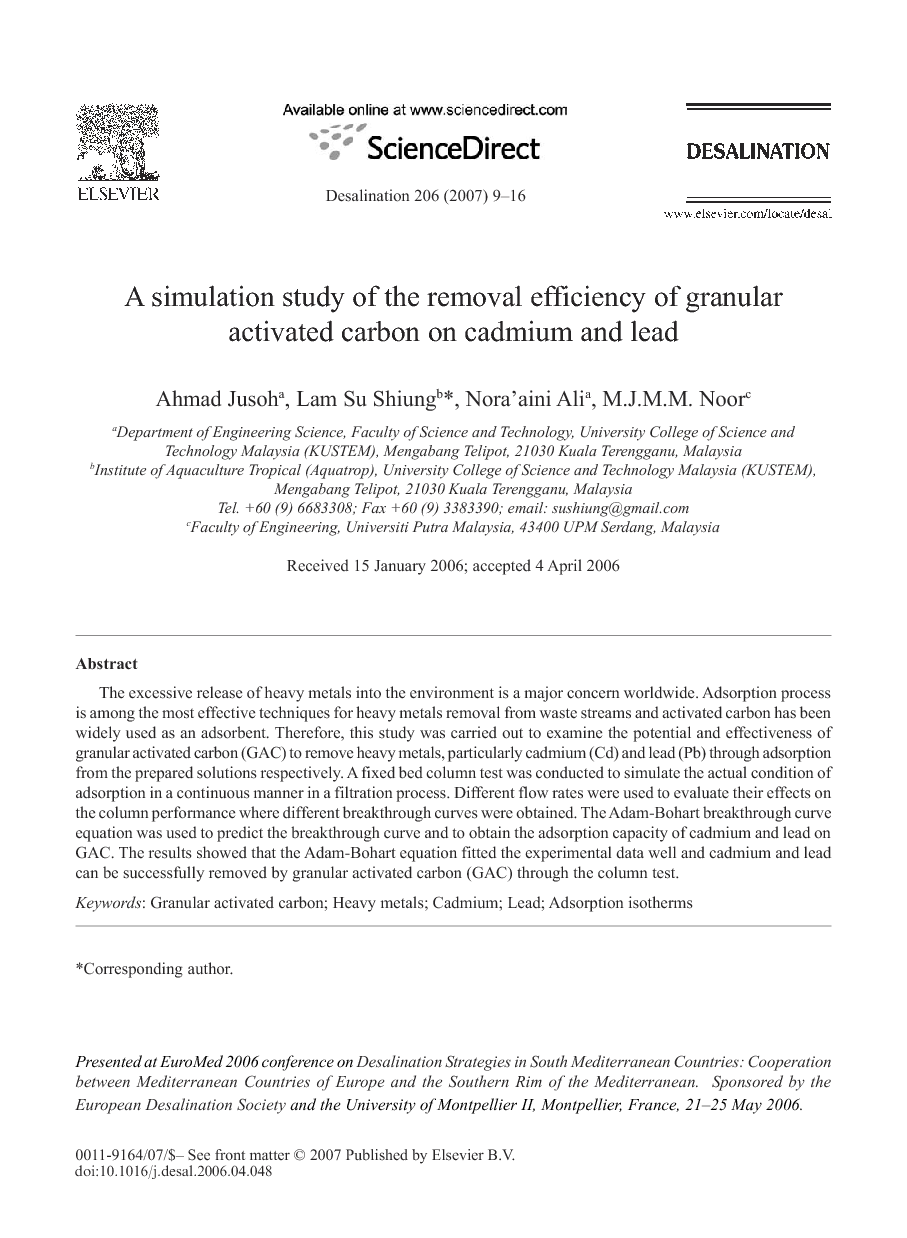 The excessive release of heavy metals into the environment is a major concern worldwide. Adsorption process is among the most effective techniques for heavy metals removal from waste streams and activated carbon has been widely used as an adsorbent. Therefore, this study was carried out to examine the potential and effectiveness of granular activated carbon (GAC) to remove heavy metals, particularly cadmium (Cd) and lead (Pb) through adsorption from the prepared solutions respectively. A fixed bed column test was conducted to simulate the actual condition of adsorption in a continuous manner in a filtration process. Different flow rates were used to evaluate their effects on the column performance where different breakthrough curves were obtained. The Adam-Bohart breakthrough curve equation was used to predict the breakthrough curve and to obtain the adsorption capacity of cadmium and lead on GAC. The results showed that the Adam-Bohart equation fitted the experimental data well and cadmium and lead can be successfully removed by granular activated carbon (GAC) through the column test.

The excessive release of heavy metals into the environment is a major concern worldwide. Heavy metal contamination exists in aqueous wastes of many industries, such as metal plating, mining operations, tanneries, chloral kali, radiator manufacturing, smelting, alloy industries and storage batteries industries, etc. [1] and these metal ions do not degrade into harmless end products [2] Heavy metals like As, Cd, Cu, Hg, Zn, Pb, Cd,Ni, Cr, etc. present such a kind of hazardous wastes. The study has shown that the highest flow of cadmium in organic waste is with municipal wastewater sludge and biodegradable kitchen waste, whereas human excreta only carry small amounts of cadmium. Cadmium mainly accumulates in the liver and kidney [3], while the bones, heart, pancreas, testes and hematopoietic system were affected following chronic exposure [4].These organs’ functions are impaired and anemia nis frequently observed at chronic exposure. On the other hand, the occurrence of lead inn ndrinking water is one of the results of contamination of the water source or corrosion in the distribution system where lead piping is used. Once absorbed, lead passes into the bloodstream where more than 95% is bound to the erythrocytes, causing nincreased fragility and reduced life span of the cells [5]. Acute or classical lead poisoning in human adults is manifested by anemia (caused by the metabolic antagonism of iron at the absorptive level), wrist and foot drop, and renal damage [4]. Studies on the treatment of effluent bearing heavy metals have revealed adsorption to be a highly effective technique for the removal of heavy metals from waste streams, and activated carbon has been widely used as an adsorbent [6]. Additionally, adsorption has been found to be superior to other techniques for water re-use in terms of the initial cost, simplicity of design, ease of operation and insensibility to toxic substances [7]. Contaminants can be physically (physisorption) or chemically adsorbed (chemisorption) onto the GAC [8] which acts as an adsorbent while the adsorbate such as lead and cadmium will accumulate on the GAC surface. Granular activated carbon (GAC) was the most popular adsorbent and has been used with great success [9]. Previous study has showed that GAC also can remove heavy metals in water treatment [4]. In Malaysia, coconut and palm shells are available as the sources of low-cost adsorbent or activated carbon which can be effectively used in the industrial wastewater treatment for heavy metals. This is because these materials are considered as waste products from the country’s economy of palm oil production. Therefore, it can help to create a large-scale recycling mechanism where utilization of waste products would achieve the most possible extent, thus reducing the impact of pollution on the environment and helping to rationally consume natural resources. The objectives of this study were to determine the effectiveness of granular activated carbon(GAC) to remove heavy metals (cadmium and lead) from a solution and to study the mechanisms of adsorption of cadmium and lead respectively onto GAC by performing continuous column approaches. If the outcome of the study is favourable, then it can be used as an alternative in water treatment to remove heavy metals (cadmium and lead) from wastewater from the coating industry and electroplating, especially in aluminiumforming industry. Thus, different flow rates were used to correlate the effect of empty bed contact time (EBCT) in the continuous column approach. Adam–Bohart breakthrough equation was used in the column study to determine the adsorption capacity of cadmium and lead onto GAC.

In the column test, cadmium and lead removal was most efficient when the flow rate was low.This was because a slower flow rate produced higher EBCT and the Cd/Pb had longer time to diffuse onto the solid phase of the GAC. Besides, the decrease of the contact time between the adsorbate and adsorbent results in the occurrence of a premature breakthrough, thus reducing the service time of the bed. The Adam–Bohart model equation was found fitting the experimental data at higher EBCT or slower flow rates. This was due to the fact that the equilibrium corresponding to the batch experiment could be reached at a slower flow rate. In addition, the adsorptive capacity No for lead was found to be higher than the adsorptive capacity for cadmium in this study. The reason was that the activated carbon used in this experiment had a low adsorptive capacity for cadmium compared to lead. However, cadmium has a faster adsorption rate in dynamic flow compared to lead. Additionally, GAC was able to remove cadmium and lead in the prepared solution to a safety level given by the Natural Guidelines for Drinking Quality