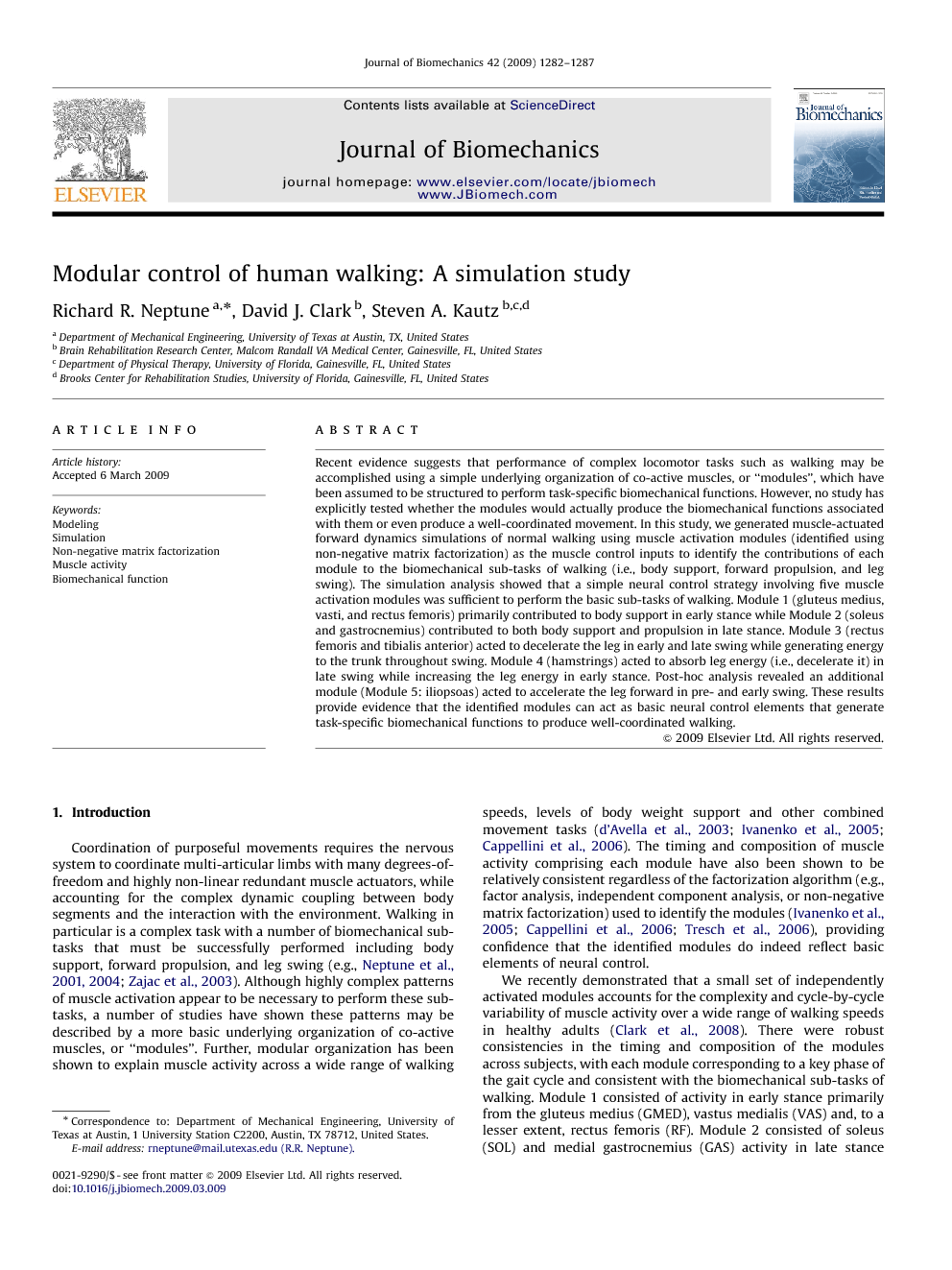 Recent evidence suggests that performance of complex locomotor tasks such as walking may be accomplished using a simple underlying organization of co-active muscles, or “modules”, which have been assumed to be structured to perform task-specific biomechanical functions. However, no study has explicitly tested whether the modules would actually produce the biomechanical functions associated with them or even produce a well-coordinated movement. In this study, we generated muscle-actuated forward dynamics simulations of normal walking using muscle activation modules (identified using non-negative matrix factorization) as the muscle control inputs to identify the contributions of each module to the biomechanical sub-tasks of walking (i.e., body support, forward propulsion, and leg swing). The simulation analysis showed that a simple neural control strategy involving five muscle activation modules was sufficient to perform the basic sub-tasks of walking. Module 1 (gluteus medius, vasti, and rectus femoris) primarily contributed to body support in early stance while Module 2 (soleus and gastrocnemius) contributed to both body support and propulsion in late stance. Module 3 (rectus femoris and tibialis anterior) acted to decelerate the leg in early and late swing while generating energy to the trunk throughout swing. Module 4 (hamstrings) acted to absorb leg energy (i.e., decelerate it) in late swing while increasing the leg energy in early stance. Post-hoc analysis revealed an additional module (Module 5: iliopsoas) acted to accelerate the leg forward in pre- and early swing. These results provide evidence that the identified modules can act as basic neural control elements that generate task-specific biomechanical functions to produce well-coordinated walking.

Coordination of purposeful movements requires the nervous system to coordinate multi-articular limbs with many degrees-of-freedom and highly non-linear redundant muscle actuators, while accounting for the complex dynamic coupling between body segments and the interaction with the environment. Walking in particular is a complex task with a number of biomechanical sub-tasks that must be successfully performed including body support, forward propulsion, and leg swing (e.g., Neptune et al., 2001 and Neptune et al., 2004; Zajac et al., 2003). Although highly complex patterns of muscle activation appear to be necessary to perform these sub-tasks, a number of studies have shown these patterns may be described by a more basic underlying organization of co-active muscles, or “modules”. Further, modular organization has been shown to explain muscle activity across a wide range of walking speeds, levels of body weight support and other combined movement tasks (d’Avella et al., 2003; Ivanenko et al., 2005; Cappellini et al., 2006). The timing and composition of muscle activity comprising each module have also been shown to be relatively consistent regardless of the factorization algorithm (e.g., factor analysis, independent component analysis, or non-negative matrix factorization) used to identify the modules (Ivanenko et al., 2005; Cappellini et al., 2006; Tresch et al., 2006), providing confidence that the identified modules do indeed reflect basic elements of neural control. We recently demonstrated that a small set of independently activated modules accounts for the complexity and cycle-by-cycle variability of muscle activity over a wide range of walking speeds in healthy adults (Clark et al., 2008). There were robust consistencies in the timing and composition of the modules across subjects, with each module corresponding to a key phase of the gait cycle and consistent with the biomechanical sub-tasks of walking. Module 1 consisted of activity in early stance primarily from the gluteus medius (GMED), vastus medialis (VAS) and, to a lesser extent, rectus femoris (RF). Module 2 consisted of soleus (SOL) and medial gastrocnemius (GAS) activity in late stance while Module 3 was composed primarily of activity in the tibialis anterior (TA) and rectus femoris with separate peaks of activity in early stance and early swing. Finally, Module 4 was mainly comprised of activation of medial and lateral hamstrings in late stance and early swing. Previous studies have hypothesized that the modular organization of muscle activation may represent the functional translation between sensorimotor control signals and biomechanical actions (Ting and Macpherson, 2005). Most factorization approaches are purely signal processing algorithms and therefore there is no requirement that identified modules produce biomechanically relevant output. Nevertheless, a number of studies have shown correlations between the activity from muscle modules and functional outputs related to task performance (e.g., Ivanenko et al., 2005; Ting and Macpherson, 2005). However, no study has explicitly tested whether the modules would actually produce the biomechanical functions associated with them. Raasch and Zajac (1999) did use computer simulations of pedaling to show that three signals controlling six muscle groups (3 pairs of alternating antagonistic functions) were sufficient to generate a variety of pedaling tasks (e.g., one legged, two legged, smooth, and energy efficient pedaling) by adjusting the relative excitation among the muscle groups. However, walking is a more complex motor task as there are increased kinematic degrees-of-freedom and upright balance is difficult to control. In addition, their muscle groupings were not extracted from their data using a factorization approach. Thus, an open question remains as to whether the modular organization of motor activity identified in factor analyses corresponds to the production of specific biomechanical output to yield flexible yet robust control of walking sub-tasks. Detailed neuromusculoskeletal models provide an ideal framework to investigate the biomechanical function of each module by identifying and quantifying their contributions to the critical walking sub-tasks of body support, forward propulsion, and leg swing. In this study, we generated muscle-actuated forward dynamics simulations of normal healthy walking using the muscle activation modules identified in a subset of the subjects from Clark et al. (2008) as the muscle control inputs to (a) assess whether the modules are sufficient to produce well-coordinated walking and (b) identify the contributions of each module to the necessary biomechanical walking sub-tasks. This approach will critically assess the functional output of the previously identified modular organization of muscle activity in walking and investigate whether it provides a foundation for the neuromotor control of human locomotion.