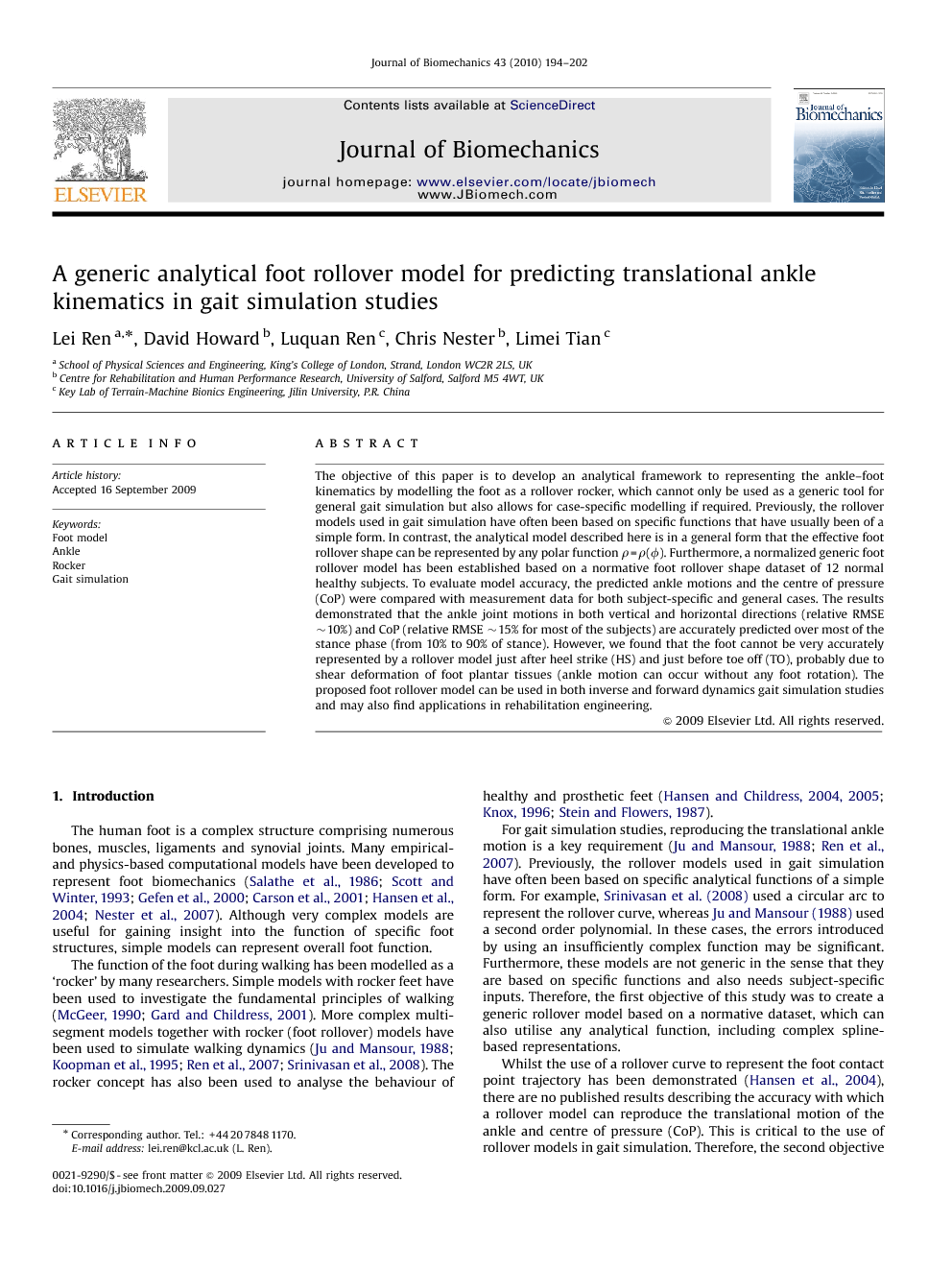 The objective of this paper is to develop an analytical framework to representing the ankle–foot kinematics by modelling the foot as a rollover rocker, which cannot only be used as a generic tool for general gait simulation but also allows for case-specific modelling if required. Previously, the rollover models used in gait simulation have often been based on specific functions that have usually been of a simple form. In contrast, the analytical model described here is in a general form that the effective foot rollover shape can be represented by any polar function ρ=ρ(φ). Furthermore, a normalized generic foot rollover model has been established based on a normative foot rollover shape dataset of 12 normal healthy subjects. To evaluate model accuracy, the predicted ankle motions and the centre of pressure (CoP) were compared with measurement data for both subject-specific and general cases. The results demonstrated that the ankle joint motions in both vertical and horizontal directions (relative RMSE ∼10%) and CoP (relative RMSE ∼15% for most of the subjects) are accurately predicted over most of the stance phase (from 10% to 90% of stance). However, we found that the foot cannot be very accurately represented by a rollover model just after heel strike (HS) and just before toe off (TO), probably due to shear deformation of foot plantar tissues (ankle motion can occur without any foot rotation). The proposed foot rollover model can be used in both inverse and forward dynamics gait simulation studies and may also find applications in rehabilitation engineering.

The human foot is a complex structure comprising numerous bones, muscles, ligaments and synovial joints. Many empirical- and physics-based computational models have been developed to represent foot biomechanics (Salathe et al., 1986; Scott and Winter, 1993; Gefen et al., 2000; Carson et al., 2001; Hansen et al., 2004; Nester et al., 2007). Although very complex models are useful for gaining insight into the function of specific foot structures, simple models can represent overall foot function. The function of the foot during walking has been modelled as a ‘rocker’ by many researchers. Simple models with rocker feet have been used to investigate the fundamental principles of walking (McGeer, 1990; Gard and Childress, 2001). More complex multi-segment models together with rocker (foot rollover) models have been used to simulate walking dynamics (Ju and Mansour, 1988; Koopman et al., 1995; Ren et al., 2007; Srinivasan et al., 2008). The rocker concept has also been used to analyse the behaviour of healthy and prosthetic feet (Hansen and Childress, 2004 and Hansen and Childress, 2005; Knox, 1996; Stein and Flowers, 1987). For gait simulation studies, reproducing the translational ankle motion is a key requirement (Ju and Mansour, 1988; Ren et al., 2007). Previously, the rollover models used in gait simulation have often been based on specific analytical functions of a simple form. For example, Srinivasan et al. (2008) used a circular arc to represent the rollover curve, whereas Ju and Mansour (1988) used a second order polynomial. In these cases, the errors introduced by using an insufficiently complex function may be significant. Furthermore, these models are not generic in the sense that they are based on specific functions and also needs subject-specific inputs. Therefore, the first objective of this study was to create a generic rollover model based on a normative dataset, which can also utilise any analytical function, including complex spline-based representations. Whilst the use of a rollover curve to represent the foot contact point trajectory has been demonstrated (Hansen et al., 2004), there are no published results describing the accuracy with which a rollover model can reproduce the translational motion of the ankle and centre of pressure (CoP). This is critical to the use of rollover models in gait simulation. Therefore, the second objective of this study was to establish the accuracy with which a rollover model can reproduce the ankle kinematics. Hence, the generic model was tested in both subject-specific and general modelling scenarios by validating the analytically derived ankle kinematics against measurement data.