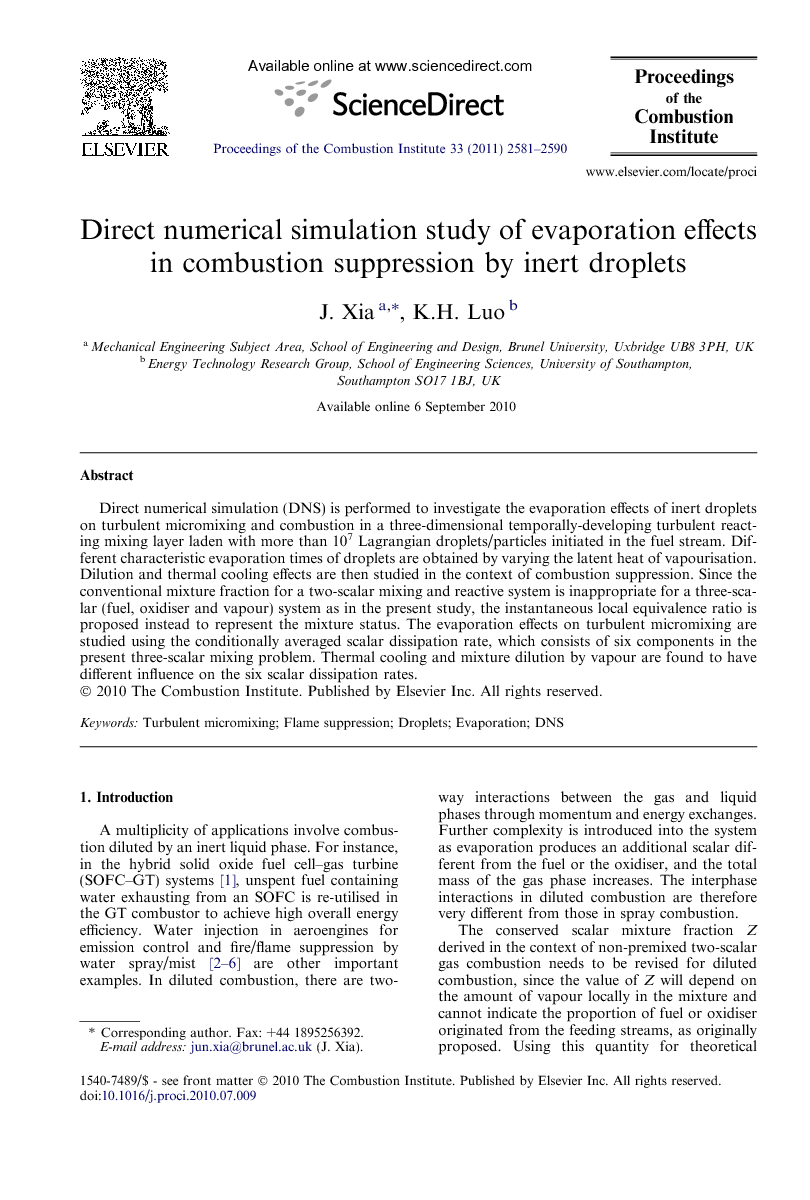 Direct numerical simulation (DNS) is performed to investigate the evaporation effects of inert droplets on turbulent micromixing and combustion in a three-dimensional temporally-developing turbulent reacting mixing layer laden with more than 107 Lagrangian droplets/particles initiated in the fuel stream. Different characteristic evaporation times of droplets are obtained by varying the latent heat of vapourisation. Dilution and thermal cooling effects are then studied in the context of combustion suppression. Since the conventional mixture fraction for a two-scalar mixing and reactive system is inappropriate for a three-scalar (fuel, oxidiser and vapour) system as in the present study, the instantaneous local equivalence ratio is proposed instead to represent the mixture status. The evaporation effects on turbulent micromixing are studied using the conditionally averaged scalar dissipation rate, which consists of six components in the present three-scalar mixing problem. Thermal cooling and mixture dilution by vapour are found to have different influence on the six scalar dissipation rates.

A multiplicity of applications involve combustion diluted by an inert liquid phase. For instance, in the hybrid solid oxide fuel cell–gas turbine (SOFC–GT) systems [1], unspent fuel containing water exhausting from an SOFC is re-utilised in the GT combustor to achieve high overall energy efficiency. Water injection in aeroengines for emission control and fire/flame suppression by water spray/mist [2], [3], [4], [5] and [6] are other important examples. In diluted combustion, there are two-way interactions between the gas and liquid phases through momentum and energy exchanges. Further complexity is introduced into the system as evaporation produces an additional scalar different from the fuel or the oxidiser, and the total mass of the gas phase increases. The interphase interactions in diluted combustion are therefore very different from those in spray combustion. The conserved scalar mixture fraction Z derived in the context of non-premixed two-scalar gas combustion needs to be revised for diluted combustion, since the value of Z will depend on the amount of vapour locally in the mixture and cannot indicate the proportion of fuel or oxidiser originated from the feeding streams, as originally proposed. Using this quantity for theoretical analysis and model construction could lead to misleading results and conclusions, unless the vapour dilution is relatively weak and would not modify Z significantly. Micromixing in turbulent reacting flow is crucial for non-premixed, mixing-controlled combustion. It is measured by the scalar dissipation rate or equivalently the dissipation rate of the mixture-fraction variance, χ=D∇Z″·∇Z″, where D is mass diffusion coefficient. Information and modelling of the unclosed term View the MathML source in the transport equation of the Favre-mean mixture-fraction variance View the MathML source are vital to properly predict View the MathML source. The scalar dissipation rate has been extensively studied in both gas [7], [8], [9], [10] and [11] and spray [12], [13], [14], [15] and [16] combustion. In spray combustion, evaporation of fuel droplets generates gradients of fuel mass fraction, and thus causes the scalar dissipation rate to increase. This has been confirmed with DNS in homogeneous shear turbulent flow [12] and isotropic decaying turbulent flow [13]. The ratio of the time scale of scalar micromixing to the integral time scale of turbulence was also found to be enhanced to 10–1000 during fuel evaporation, rather than two as commonly proposed for gas combustion, in modelling the evaporation and mixing in a direct-injection gasoline engine [14]. The pertinent information about the effects of evaporation of inert droplets on scalar dissipation rate in diluted combustion is still lacking [17], [18] and [19]. The whole set of scalar dissipation rates, originated from the fluctuation gradients of the fuel gas, oxidiser gas, inert vapour and their correlations, are scrutinised in this paper, both at the initial stage of interactions between the two phases when evaporation is intense and at the time when the multiphase reacting flow approaches a statistically steady state. The investigation is performed via parametric studies using DNS by varying the characteristic evaporation times of droplets. The various aspects of the evaporation effects of inert droplets on turbulent micromixing and combustion suppression are highlighted.