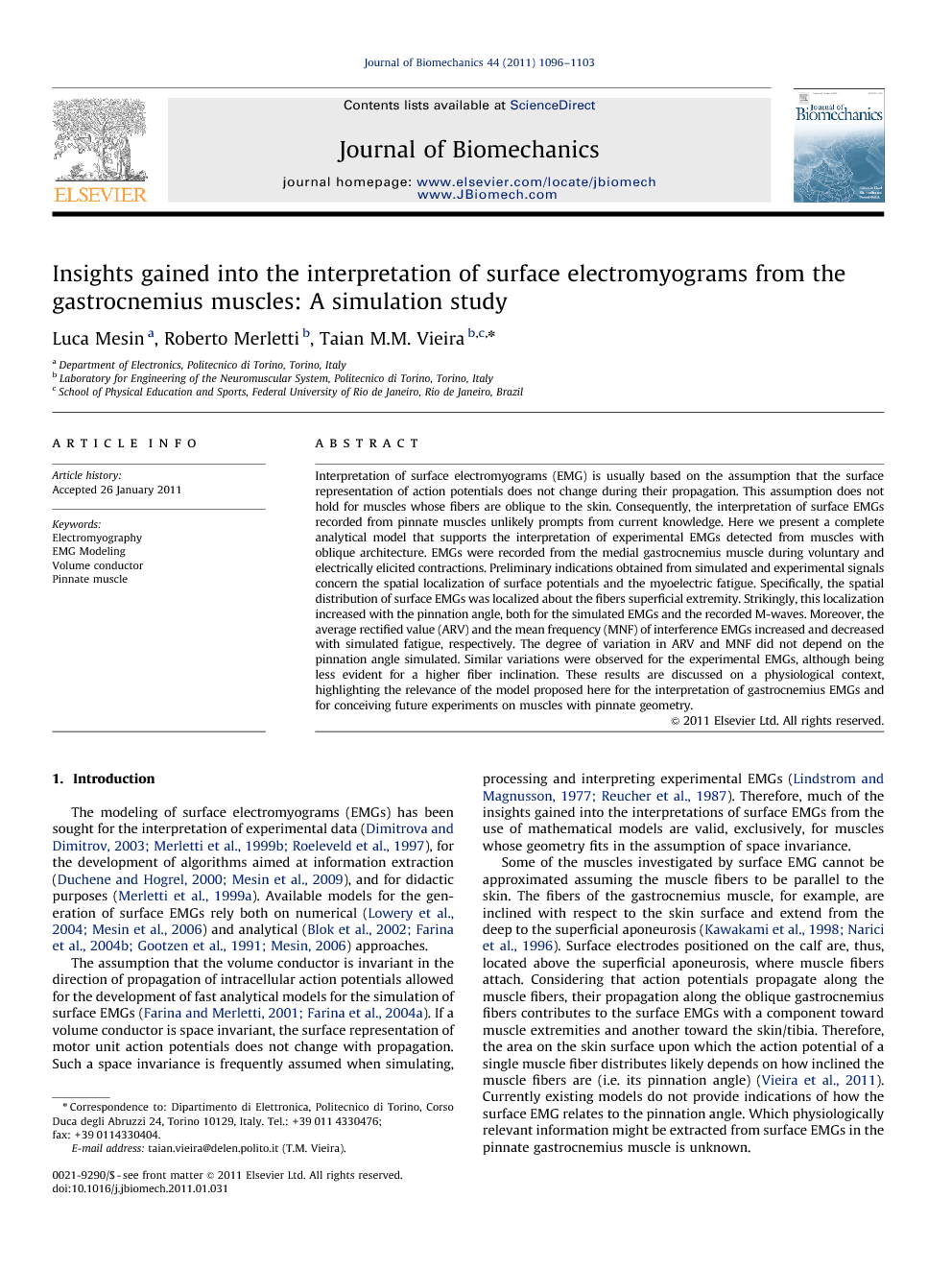 Interpretation of surface electromyograms (EMG) is usually based on the assumption that the surface representation of action potentials does not change during their propagation. This assumption does not hold for muscles whose fibers are oblique to the skin. Consequently, the interpretation of surface EMGs recorded from pinnate muscles unlikely prompts from current knowledge. Here we present a complete analytical model that supports the interpretation of experimental EMGs detected from muscles with oblique architecture. EMGs were recorded from the medial gastrocnemius muscle during voluntary and electrically elicited contractions. Preliminary indications obtained from simulated and experimental signals concern the spatial localization of surface potentials and the myoelectric fatigue. Specifically, the spatial distribution of surface EMGs was localized about the fibers superficial extremity. Strikingly, this localization increased with the pinnation angle, both for the simulated EMGs and the recorded M-waves. Moreover, the average rectified value (ARV) and the mean frequency (MNF) of interference EMGs increased and decreased with simulated fatigue, respectively. The degree of variation in ARV and MNF did not depend on the pinnation angle simulated. Similar variations were observed for the experimental EMGs, although being less evident for a higher fiber inclination. These results are discussed on a physiological context, highlighting the relevance of the model proposed here for the interpretation of gastrocnemius EMGs and for conceiving future experiments on muscles with pinnate geometry.

The modeling of surface electromyograms (EMGs) has been sought for the interpretation of experimental data (Dimitrova and Dimitrov, 2003, Merletti et al., 1999b and Roeleveld et al., 1997), for the development of algorithms aimed at information extraction (Duchene and Hogrel, 2000 and Mesin et al., 2009), and for didactic purposes (Merletti et al., 1999a). Available models for the generation of surface EMGs rely both on numerical (Lowery et al., 2004 and Mesin et al., 2006) and analytical (Blok et al., 2002, Farina et al., 2004b, Gootzen et al., 1991 and Mesin, 2006) approaches. The assumption that the volume conductor is invariant in the direction of propagation of intracellular action potentials allowed for the development of fast analytical models for the simulation of surface EMGs (Farina and Merletti, 2001 and Farina et al., 2004a). If a volume conductor is space invariant, the surface representation of motor unit action potentials does not change with propagation. Such a space invariance is frequently assumed when simulating, processing and interpreting experimental EMGs (Lindstrom and Magnusson, 1977 and Reucher et al., 1987). Therefore, much of the insights gained into the interpretations of surface EMGs from the use of mathematical models are valid, exclusively, for muscles whose geometry fits in the assumption of space invariance. Some of the muscles investigated by surface EMG cannot be approximated assuming the muscle fibers to be parallel to the skin. The fibers of the gastrocnemius muscle, for example, are inclined with respect to the skin surface and extend from the deep to the superficial aponeurosis (Kawakami et al., 1998 and Narici et al., 1996). Surface electrodes positioned on the calf are, thus, located above the superficial aponeurosis, where muscle fibers attach. Considering that action potentials propagate along the muscle fibers, their propagation along the oblique gastrocnemius fibers contributes to the surface EMGs with a component toward muscle extremities and another toward the skin/tibia. Therefore, the area on the skin surface upon which the action potential of a single muscle fiber distributes likely depends on how inclined the muscle fibers are (i.e. its pinnation angle) (Vieira et al., 2011). Currently existing models do not provide indications of how the surface EMG relates to the pinnation angle. Which physiologically relevant information might be extracted from surface EMGs in the pinnate gastrocnemius muscle is unknown. In this study we simulate a pinnate muscle, with fibers inclined in depth direction, to interpret surface EMGs detected from the gastrocnemius muscles. A complete mathematical model, which includes muscle fibers with finite length and three layers of tissues, is presented here for the generation of single fiber action potentials (SFAPs). In particular, we simulate the distribution of motor unit action potentials (MUAPs) on the skin and the interference EMG for different degrees of fibers inclination. Implications for the interpretation of how action potentials distribute on the skin and for the estimation of muscle fatigue are addressed as well. Ultrasound images and experimental EMGs are recorded from the human medial gastrocnemius (MG) muscle to investigate how much theoretical and empirical data correspond.

A new model for the simulation of surface EMGs in pinnate muscles was developed and applied to interpret experimental data obtained from the gastrocnemius muscles. The most striking result was the localized representation of surface potentials. Because of gastrocnemius pinnate architecture, simulated EMGs and experimental M-waves were detected only by few consecutive electrodes. Higher pinnation angles led to more localized potentials. The regional organization of gastrocnemius activity in different motor tasks could, then, be investigated with surface electromyography. The potentiality of the model was also shown for the investigation of myoelectric fatigue with amplitude and spectral indexes. Both descriptors varied during fatigue, either for experimental or simulated EMGs. The greater variability of experimental EMGs, observed for higher pinnation angles, was likely due to different recruitment strategies, not accounted for in the simulations.