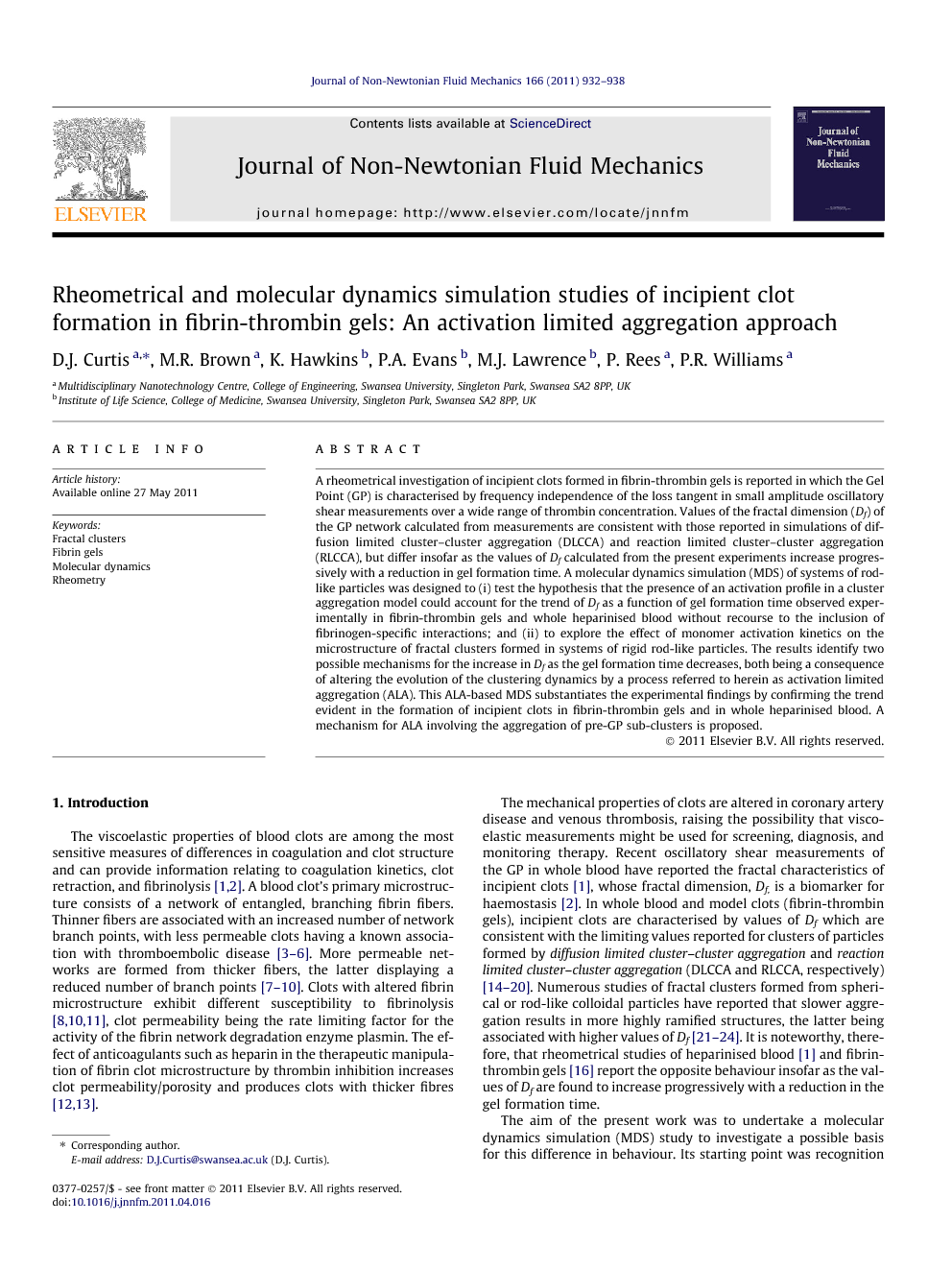 A rheometrical investigation of incipient clots formed in fibrin-thrombin gels is reported in which the Gel Point (GP) is characterised by frequency independence of the loss tangent in small amplitude oscillatory shear measurements over a wide range of thrombin concentration. Values of the fractal dimension (Df) of the GP network calculated from measurements are consistent with those reported in simulations of diffusion limited cluster–cluster aggregation (DLCCA) and reaction limited cluster–cluster aggregation (RLCCA), but differ insofar as the values of Df calculated from the present experiments increase progressively with a reduction in gel formation time. A molecular dynamics simulation (MDS) of systems of rod-like particles was designed to (i) test the hypothesis that the presence of an activation profile in a cluster aggregation model could account for the trend of Df as a function of gel formation time observed experimentally in fibrin-thrombin gels and whole heparinised blood without recourse to the inclusion of fibrinogen-specific interactions; and (ii) to explore the effect of monomer activation kinetics on the microstructure of fractal clusters formed in systems of rigid rod-like particles. The results identify two possible mechanisms for the increase in Df as the gel formation time decreases, both being a consequence of altering the evolution of the clustering dynamics by a process referred to herein as activation limited aggregation (ALA). This ALA-based MDS substantiates the experimental findings by confirming the trend evident in the formation of incipient clots in fibrin-thrombin gels and in whole heparinised blood. A mechanism for ALA involving the aggregation of pre-GP sub-clusters is proposed

The viscoelastic properties of blood clots are among the most sensitive measures of differences in coagulation and clot structure and can provide information relating to coagulation kinetics, clot retraction, and fibrinolysis [1] and [2]. A blood clot’s primary microstructure consists of a network of entangled, branching fibrin fibers. Thinner fibers are associated with an increased number of network branch points, with less permeable clots having a known association with thromboembolic disease [3], [4], [5] and [6]. More permeable networks are formed from thicker fibers, the latter displaying a reduced number of branch points [7], [8], [9] and [10]. Clots with altered fibrin microstructure exhibit different susceptibility to fibrinolysis [8], [10] and [11], clot permeability being the rate limiting factor for the activity of the fibrin network degradation enzyme plasmin. The effect of anticoagulants such as heparin in the therapeutic manipulation of fibrin clot microstructure by thrombin inhibition increases clot permeability/porosity and produces clots with thicker fibres [12] and [13]. The mechanical properties of clots are altered in coronary artery disease and venous thrombosis, raising the possibility that viscoelastic measurements might be used for screening, diagnosis, and monitoring therapy. Recent oscillatory shear measurements of the GP in whole blood have reported the fractal characteristics of incipient clots [1], whose fractal dimension, Df, is a biomarker for haemostasis [2]. In whole blood and model clots (fibrin-thrombin gels), incipient clots are characterised by values of Df which are consistent with the limiting values reported for clusters of particles formed by diffusion limited cluster–cluster aggregation and reaction limited cluster–cluster aggregation (DLCCA and RLCCA, respectively) [14], [15], [16], [17], [18], [19] and [20]. Numerous studies of fractal clusters formed from spherical or rod-like colloidal particles have reported that slower aggregation results in more highly ramified structures, the latter being associated with higher values of Df [21], [22], [23] and [24]. It is noteworthy, therefore, that rheometrical studies of heparinised blood [1] and fibrin-thrombin gels [16] report the opposite behaviour insofar as the values of Df are found to increase progressively with a reduction in the gel formation time. The aim of the present work was to undertake a molecular dynamics simulation (MDS) study to investigate a possible basis for this difference in behaviour. Its starting point was recognition of the fact that in previous simulation work, all particles/rods involved are simultaneously activated to the same degree by modifying their surface charge. The present MDS of rod aggregation incorporated an activation profile in order to elucidate the effect of rod activation rates on the value of Df. In blood coagulation, thrombin activates fibrinogen monomers which subsequently polymerise to form the incipient fibrin clot network [25] and [26]. The concentration of active monomers increases at a rate dictated by the time course of evolution of the thrombin concentration, this feature being represented in the present MDS by inclusion of the monomer (rod) activation profile. In addition to the present MDS studies, rheological characterisation of a range of fibrin-thrombin gels was conducted by oscillatory shear measurements in order to extend the results of previous studies

The results of this ALA-MDS study substantiate the experimental findings by confirming the trend evident in the formation of incipient clots in fibrin-thrombin gels and in heparinised blood i.e. a progressive reduction of Df is associated with increasing values of clot formation time. The potential clinical significance of this is that, in blood coagulation, this behaviour is a consequence of underlying changes in the evolution of the thrombin generation ‘profile’ (an assertion supported by the previously reported association between Df and the activated partial thromboplastin time, APTT [1]). In stroke, endothelial and vascular damage and activation of the coagulation cascade result in the rapid formation of abnormal clots, often with excessively cross-linked fibrin networks, thinner fibrin fibers and smaller pores (higher Df). By substantiating the reported trend in rheological data, the present study provides further support for the possibility of using rheometry to establish a definitive diagnostic potential of characterising clot structure and the modulation of clot architecture as a possible treatment for thrombosis. Further ALA-MDS studies are now underway in which fibrinogen-specific interactions are included in order to test the range of Df achievable in order to relate these to values found in blood from patients with specific coagulation abnormalities.