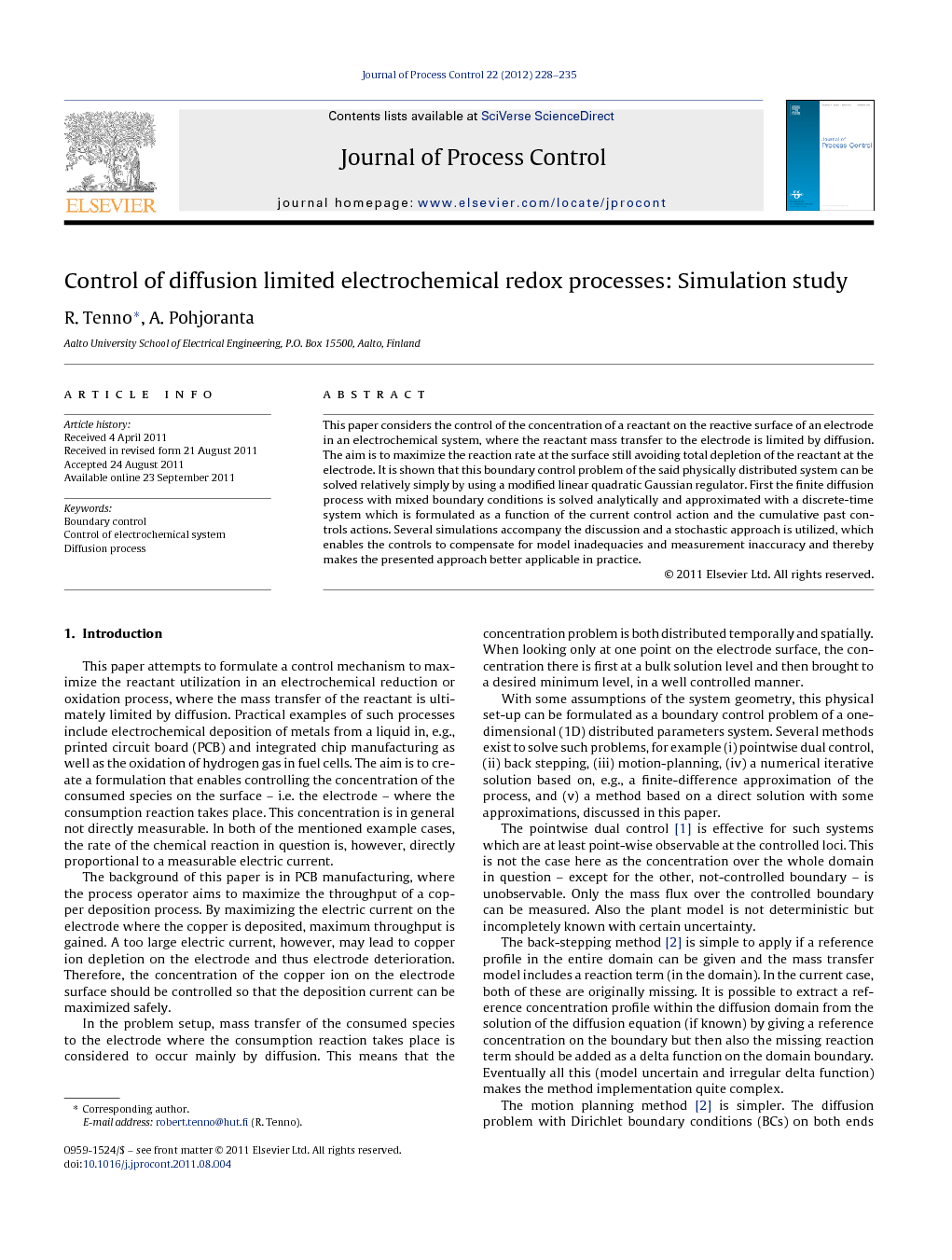 This paper considers the control of the concentration of a reactant on the reactive surface of an electrode in an electrochemical system, where the reactant mass transfer to the electrode is limited by diffusion. The aim is to maximize the reaction rate at the surface still avoiding total depletion of the reactant at the electrode. It is shown that this boundary control problem of the said physically distributed system can be solved relatively simply by using a modified linear quadratic Gaussian regulator. First the finite diffusion process with mixed boundary conditions is solved analytically and approximated with a discrete-time system which is formulated as a function of the current control action and the cumulative past controls actions. Several simulations accompany the discussion and a stochastic approach is utilized, which enables the controls to compensate for model inadequacies and measurement inaccuracy and thereby makes the presented approach better applicable in practice.

This paper attempts to formulate a control mechanism to maximize the reactant utilization in an electrochemical reduction or oxidation process, where the mass transfer of the reactant is ultimately limited by diffusion. Practical examples of such processes include electrochemical deposition of metals from a liquid in, e.g., printed circuit board (PCB) and integrated chip manufacturing as well as the oxidation of hydrogen gas in fuel cells. The aim is to create a formulation that enables controlling the concentration of the consumed species on the surface – i.e. the electrode – where the consumption reaction takes place. This concentration is in general not directly measurable. In both of the mentioned example cases, the rate of the chemical reaction in question is, however, directly proportional to a measurable electric current. The background of this paper is in PCB manufacturing, where the process operator aims to maximize the throughput of a copper deposition process. By maximizing the electric current on the electrode where the copper is deposited, maximum throughput is gained. A too large electric current, however, may lead to copper ion depletion on the electrode and thus electrode deterioration. Therefore, the concentration of the copper ion on the electrode surface should be controlled so that the deposition current can be maximized safely. In the problem setup, mass transfer of the consumed species to the electrode where the consumption reaction takes place is considered to occur mainly by diffusion. This means that the concentration problem is both distributed temporally and spatially. When looking only at one point on the electrode surface, the concentration there is first at a bulk solution level and then brought to a desired minimum level, in a well controlled manner. With some assumptions of the system geometry, this physical set-up can be formulated as a boundary control problem of a one-dimensional (1D) distributed parameters system. Several methods exist to solve such problems, for example (i) pointwise dual control, (ii) back stepping, (iii) motion-planning, (iv) a numerical iterative solution based on, e.g., a finite-difference approximation of the process, and (v) a method based on a direct solution with some approximations, discussed in this paper. The pointwise dual control [1] is effective for such systems which are at least point-wise observable at the controlled loci. This is not the case here as the concentration over the whole domain in question – except for the other, not-controlled boundary – is unobservable. Only the mass flux over the controlled boundary can be measured. Also the plant model is not deterministic but incompletely known with certain uncertainty. The back-stepping method [2] is simple to apply if a reference profile in the entire domain can be given and the mass transfer model includes a reaction term (in the domain). In the current case, both of these are originally missing. It is possible to extract a reference concentration profile within the diffusion domain from the solution of the diffusion equation (if known) by giving a reference concentration on the boundary but then also the missing reaction term should be added as a delta function on the domain boundary. Eventually all this (model uncertain and irregular delta function) makes the method implementation quite complex. The motion planning method [2] is simpler. The diffusion problem with Dirichlet boundary conditions (BCs) on both ends of the 1D domain is solved first (the bulk concentration is set on one end and a desired reference concentration trajectory on the other end). Then the solution of the aforementioned Dirichlet problem is differentiated and equalized with a Neumann boundary condition on the boundary where the concentration is controlled. The desired control is obtained by solving the equation obtained. Unfortunately, all the aforementioned methods produce deterministic controls which easily become inefficient if there are errors in the process model or inaccuracy in the measurements. Extending the motion planning methods to cope with uncertainties is possible, but the procedure produces complex control formulations due to the nonlinear estimation of unknown parameters that is necessary [3]. Similarly, extending the point-wise dual controls to a stochastic case is possible but requires application of infinite-dimensional filters, which is again impractical (e.g. [4]). Numerical solution methods, such as finite-difference (FD) approximation or the finite element method (FEM), enable augmenting the numerical implementation of the system with additive stochastic properties. The FD approximation is the simplest approach for solving and simulating the diffusion process model. Its only major drawback is that a relatively large dimension of the numerical system is required for control. For example, with a realistic diffusion coefficient of ca. 10−10 m2/s and diffusion length of 10−4 m, some 100–150 spatial solution points and a relatively small time step of 1 ms are required for good convergence and this is not in scope of practical control. The following sections describe how a method based on the direct solution of the diffusion system followed by some approximations of the system properties is applied to control the system, while the process model and the measurement include errors. The diffusion problem is solved in the system domain but only one point on the controlled boundary is considered, which enables reducing the process model to a scalar system. The resulting control system includes a proportional part with no dynamics, and an integrating part which incorporates the cumulated effects of the past control actions that are “remembered” by the physically distributed system. To improve the applicability of the approach, stochastic and systematic error terms are added to the examined process model and the measurement model that is used to observe the controlled variable. By assuming Gaussian properties of the errors, a stochastic approach to the control development can be utilized. The consequent stochastic system allows formulating the control system as a linear quadratic Gaussian (LQG) control system with some modifications that are required to account for the effects of the past control actions.

A relatively complex boundary control problem of a distributed parameters system can be represented as a modified LQG problem and solved correspondingly. Some modifications to the standard LQG algorithm are induced by the cumulated effects of the past control actions, which are “remembered” by the physically distributed system domain. Controls were developed within a copper electroplating process framework and they were studied by simulations. The simulations show good performance of the developed closed-loop system. It is found that the control approach is relatively precise compared to the system uncertainties.