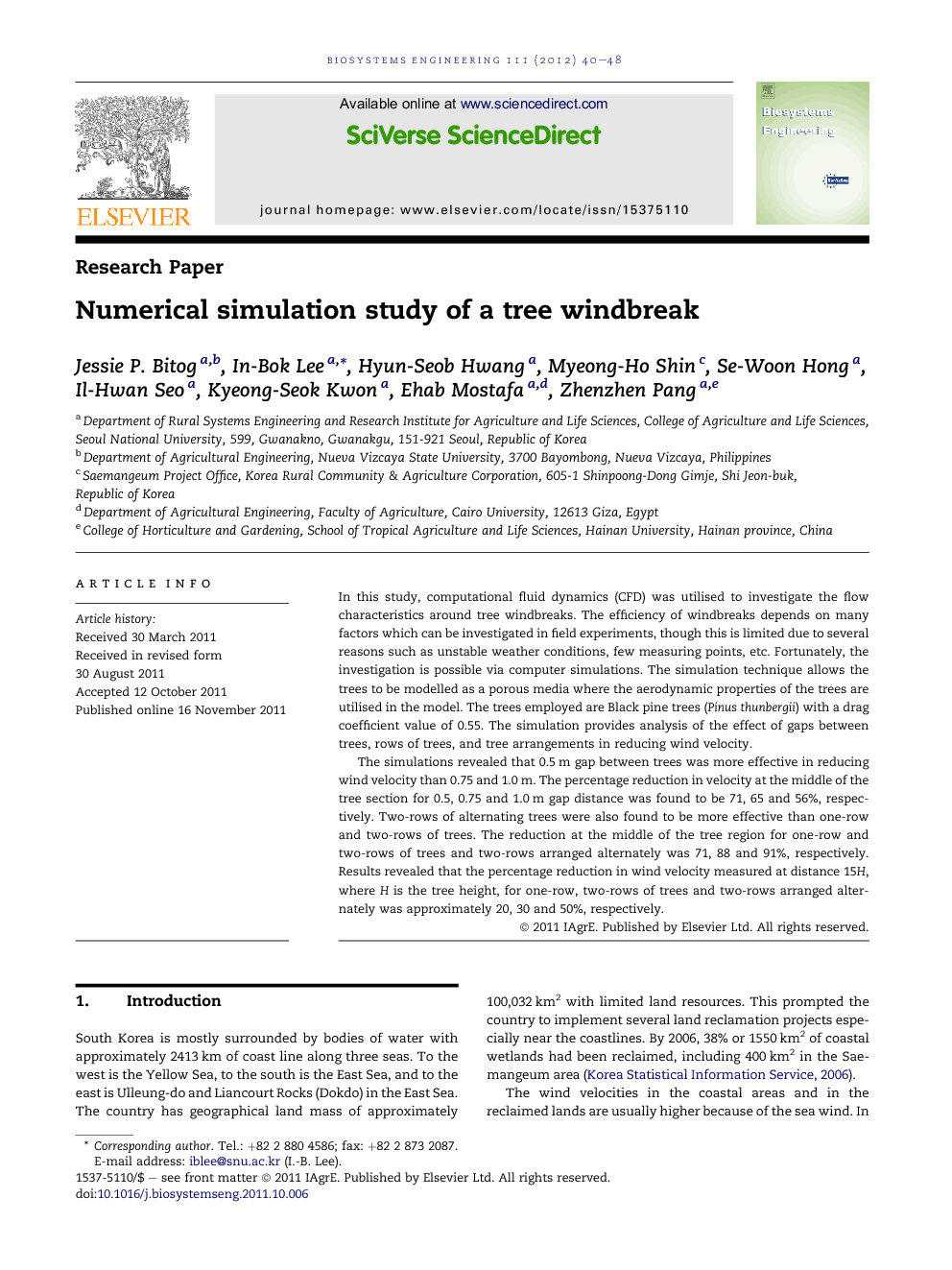 In this study, computational fluid dynamics (CFD) was utilised to investigate the flow characteristics around tree windbreaks. The efficiency of windbreaks depends on many factors which can be investigated in field experiments, though this is limited due to several reasons such as unstable weather conditions, few measuring points, etc. Fortunately, the investigation is possible via computer simulations. The simulation technique allows the trees to be modelled as a porous media where the aerodynamic properties of the trees are utilised in the model. The trees employed are Black pine trees (Pinus thunbergii) with a drag coefficient value of 0.55. The simulation provides analysis of the effect of gaps between trees, rows of trees, and tree arrangements in reducing wind velocity. The simulations revealed that 0.5 m gap between trees was more effective in reducing wind velocity than 0.75 and 1.0 m. The percentage reduction in velocity at the middle of the tree section for 0.5, 0.75 and 1.0 m gap distance was found to be 71, 65 and 56%, respectively. Two-rows of alternating trees were also found to be more effective than one-row and two-rows of trees. The reduction at the middle of the tree region for one-row and two-rows of trees and two-rows arranged alternately was 71, 88 and 91%, respectively. Results revealed that the percentage reduction in wind velocity measured at distance 15H, where H is the tree height, for one-row, two-rows of trees and two-rows arranged alternately was approximately 20, 30 and 50%, respectively.

CFD has proved to be an effective tool to simulate flow around tree windbreaks. Exploiting the power of CFD could allow quantitative visualisation and velocity reduction investigation. However, for the accuracy of the simulation study, significant values required in the simulation process such as the drag coefficient of the tree must be precisely determined. In this study, computer simulation was performed for the Black pine tree (Pinus thunbergii) windbreak, one of the most typical tree windbreaks that are very appropriate in the coastal areas and in most of the reclaimed lands in South Korea. The drag coefficient of the tree, which was earlier obtained from wind tunnel experiment, was employed in the simulation studies for the tree windbreaks to predict the effect of gap distance between trees, rows of trees and arrangement in decreasing wind velocity. The horizontal extent of its effect was also quantitatively determined. Results of the simulation studies have shown that the gap distance is a very important factor for the effectiveness of the tree windbreak especially when the effect in the lateral direction is one of the main goals of the windbreak system. The velocity reduction of the tree windbreak with a gap distance of 0.5 m could reach up to 20% at a streamwise distance of 15H. For 0.75 and 1.00 m gap distance, the reductions were approximately 11 and 4% respectively. Two-rows of trees arranged alternately were found to be the most effective in reducing the wind velocity compared to one-row and two-rows of trees. The reduction of wind velocity determined along the middle of the tree zone for one-row is approximately 71%, two-rows, 88%, and two-rows alternately arranged, 92%. Considering the streamwise extent of the effect of the windbreak at 15H, the reduction of wind velocity for two-row of trees arranged alternately could reach up to 50%. For one and two-row of trees, the quantitative effect had lowered to approximately 20 and 30%, respectively. Findings of this study should be very useful in planning and setting up natural windbreak system for a long term control of the generation and diffusion of dust especially in the reclaimed lands and the coastal areas of Korea.