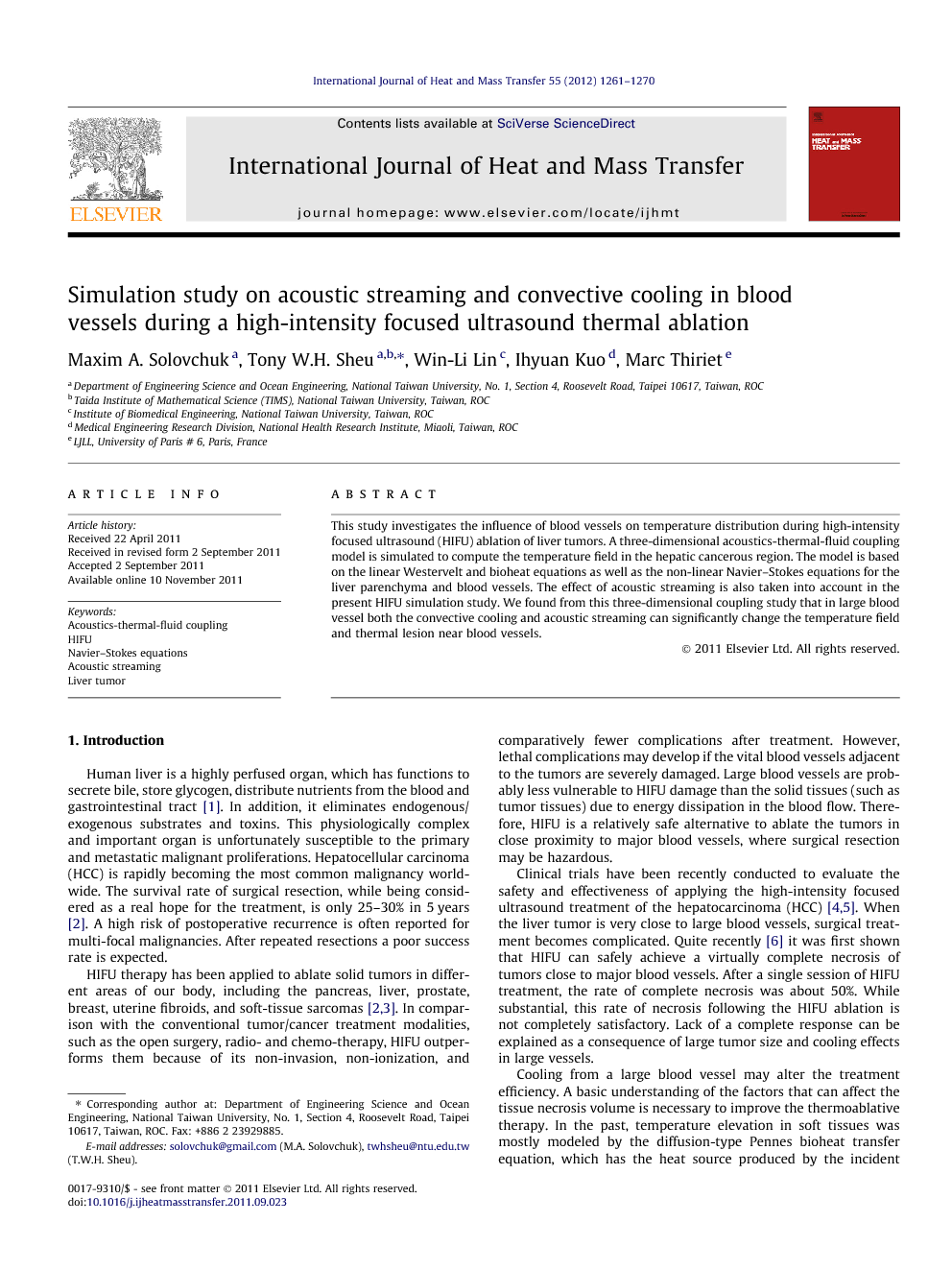 This study investigates the influence of blood vessels on temperature distribution during high-intensity focused ultrasound (HIFU) ablation of liver tumors. A three-dimensional acoustics-thermal-fluid coupling model is simulated to compute the temperature field in the hepatic cancerous region. The model is based on the linear Westervelt and bioheat equations as well as the non-linear Navier–Stokes equations for the liver parenchyma and blood vessels. The effect of acoustic streaming is also taken into account in the present HIFU simulation study. We found from this three-dimensional coupling study that in large blood vessel both the convective cooling and acoustic streaming can significantly change the temperature field and thermal lesion near blood vessels.

Human liver is a highly perfused organ, which has functions to secrete bile, store glycogen, distribute nutrients from the blood and gastrointestinal tract [1]. In addition, it eliminates endogenous/exogenous substrates and toxins. This physiologically complex and important organ is unfortunately susceptible to the primary and metastatic malignant proliferations. Hepatocellular carcinoma (HCC) is rapidly becoming the most common malignancy worldwide. The survival rate of surgical resection, while being considered as a real hope for the treatment, is only 25–30% in 5 years [2]. A high risk of postoperative recurrence is often reported for multi-focal malignancies. After repeated resections a poor success rate is expected. HIFU therapy has been applied to ablate solid tumors in different areas of our body, including the pancreas, liver, prostate, breast, uterine fibroids, and soft-tissue sarcomas [2] and [3]. In comparison with the conventional tumor/cancer treatment modalities, such as the open surgery, radio- and chemo-therapy, HIFU outperforms them because of its non-invasion, non-ionization, and comparatively fewer complications after treatment. However, lethal complications may develop if the vital blood vessels adjacent to the tumors are severely damaged. Large blood vessels are probably less vulnerable to HIFU damage than the solid tissues (such as tumor tissues) due to energy dissipation in the blood flow. Therefore, HIFU is a relatively safe alternative to ablate the tumors in close proximity to major blood vessels, where surgical resection may be hazardous. Clinical trials have been recently conducted to evaluate the safety and effectiveness of applying the high-intensity focused ultrasound treatment of the hepatocarcinoma (HCC) [4] and [5]. When the liver tumor is very close to large blood vessels, surgical treatment becomes complicated. Quite recently [6] it was first shown that HIFU can safely achieve a virtually complete necrosis of tumors close to major blood vessels. After a single session of HIFU treatment, the rate of complete necrosis was about 50%. While substantial, this rate of necrosis following the HIFU ablation is not completely satisfactory. Lack of a complete response can be explained as a consequence of large tumor size and cooling effects in large vessels. Cooling from a large blood vessel may alter the treatment efficiency. A basic understanding of the factors that can affect the tissue necrosis volume is necessary to improve the thermoablative therapy. In the past, temperature elevation in soft tissues was mostly modeled by the diffusion-type Pennes bioheat transfer equation, which has the heat source produced by the incident acoustic wave and heat sink owing to the perfusion in capillaries [7]. The amount of removed heat can be estimated by averaging the effect of blood perfusion over all tissues. Homogenization assumption is probably no longer valid in modeling the temperature elevation in the regions containing some sufficiently large vessels, inside which the blood is flowing. Both biologically relevant convective cooling in large blood vessels and perfusion cooling in microvasculatures need to be taken into account altogether. Inclusion of these two possible cooling means will greatly increase the modeling complexity since the equations of motion for the blood flow need to be solved together with the divergence-free velocity constraint equation. Curra et al. [8] developed a model to determine the influence of blood flow on the temperature distribution in the tissue during the focused ultrasound surgery. Their model was constructed on the basis of acoustic and bioheat equations. The blood vessel was on the acoustic axis. Kolios et al. [9] and Hariharan et al. [10] studied the influence of large blood vessels on the lesion size. They considered also only the acoustic equation and bioheat equation. However for a real blood vessel it is necessary to take into account the blood flow motion governed by the non-linear hemodynamic equations. The 3D mathematical acoutics-thermal-fluid model presented in [11] takes the additional acoustic streaming effect into account with an aim to show that the incident finite-amplitude ultrasound wave can affect the blood flow motion in large hepatic vessels and consequently the temperature distribution in tumor. In [11] the numerical simulation was carried out in a patient specific liver geometry. The distance between the focal point and blood vessel was about 1 cm. It was shown that acoustic streaming can affect the blood flow distribution in hepatic arterial branches and lead to a mass flux redistribution. In the present work the simple geometry is considered to understand the effect of acoustic streaming on the temperature distribution. The blood vessel is parallel to the acoustic axis. So far no numerical result, which is computed from the heat transfer equation for large blood vessel and its surrounding tissue coupled with the non-linear hemodynamic equations with an acoustic streaming effect being considered, is ever reported for HIFU tumor ablation. The whole physics remains nowadays poorly understood