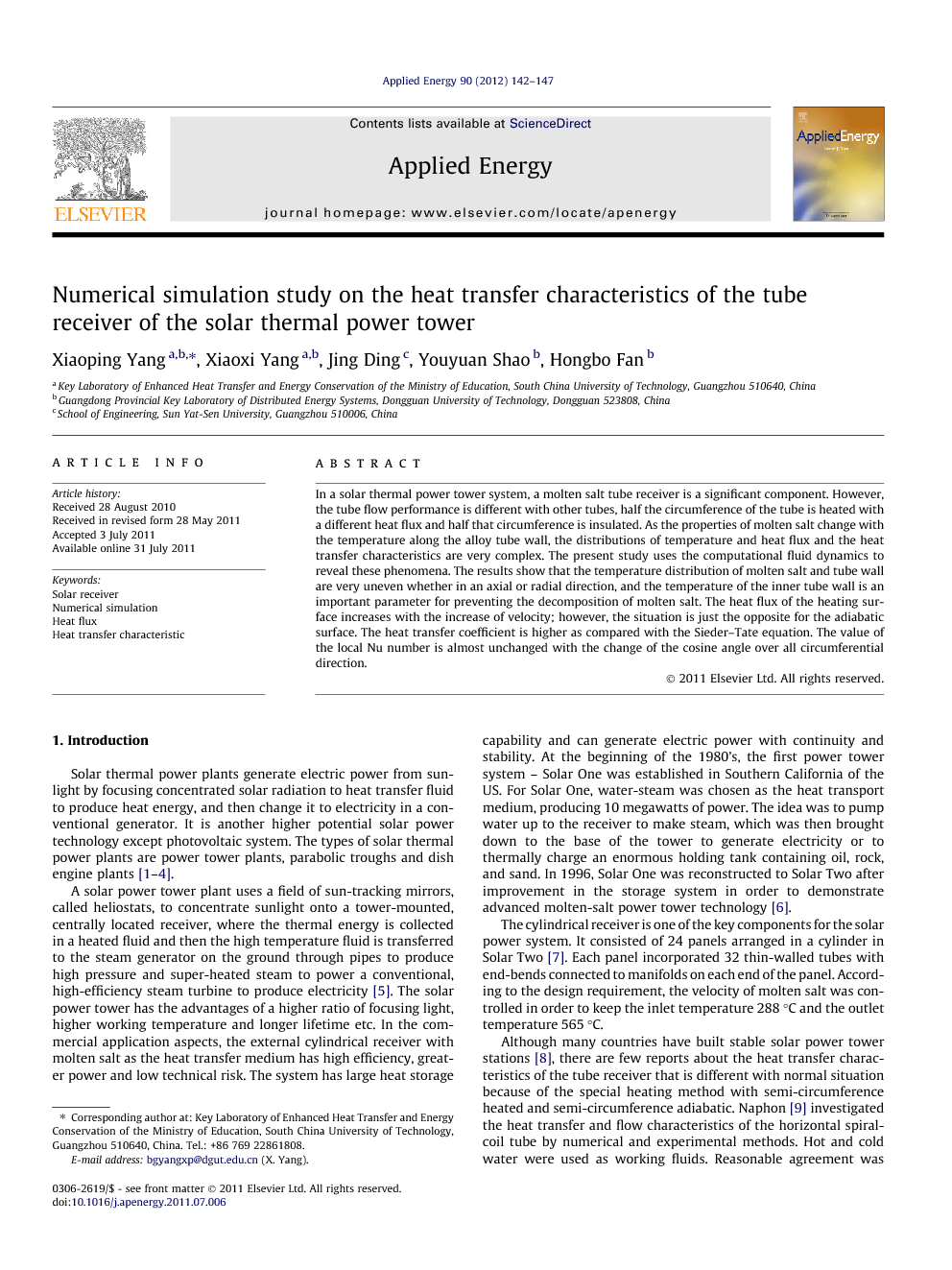 In a solar thermal power tower system, a molten salt tube receiver is a significant component. However, the tube flow performance is different with other tubes, half the circumference of the tube is heated with a different heat flux and half that circumference is insulated. As the properties of molten salt change with the temperature along the alloy tube wall, the distributions of temperature and heat flux and the heat transfer characteristics are very complex. The present study uses the computational fluid dynamics to reveal these phenomena. The results show that the temperature distribution of molten salt and tube wall are very uneven whether in an axial or radial direction, and the temperature of the inner tube wall is an important parameter for preventing the decomposition of molten salt. The heat flux of the heating surface increases with the increase of velocity; however, the situation is just the opposite for the adiabatic surface. The heat transfer coefficient is higher as compared with the Sieder–Tate equation. The value of the local Nu number is almost unchanged with the change of the cosine angle over all circumferential direction.

Solar thermal power plants generate electric power from sunlight by focusing concentrated solar radiation to heat transfer fluid to produce heat energy, and then change it to electricity in a conventional generator. It is another higher potential solar power technology except photovoltaic system. The types of solar thermal power plants are power tower plants, parabolic troughs and dish engine plants [1], [2], [3] and [4]. A solar power tower plant uses a field of sun-tracking mirrors, called heliostats, to concentrate sunlight onto a tower-mounted, centrally located receiver, where the thermal energy is collected in a heated fluid and then the high temperature fluid is transferred to the steam generator on the ground through pipes to produce high pressure and super-heated steam to power a conventional, high-efficiency steam turbine to produce electricity [5]. The solar power tower has the advantages of a higher ratio of focusing light, higher working temperature and longer lifetime etc. In the commercial application aspects, the external cylindrical receiver with molten salt as the heat transfer medium has high efficiency, greater power and low technical risk. The system has large heat storage capability and can generate electric power with continuity and stability. At the beginning of the 1980’s, the first power tower system – Solar One was established in Southern California of the US. For Solar One, water-steam was chosen as the heat transport medium, producing 10 megawatts of power. The idea was to pump water up to the receiver to make steam, which was then brought down to the base of the tower to generate electricity or to thermally charge an enormous holding tank containing oil, rock, and sand. In 1996, Solar One was reconstructed to Solar Two after improvement in the storage system in order to demonstrate advanced molten-salt power tower technology [6]. The cylindrical receiver is one of the key components for the solar power system. It consisted of 24 panels arranged in a cylinder in Solar Two [7]. Each panel incorporated 32 thin-walled tubes with end-bends connected to manifolds on each end of the panel. According to the design requirement, the velocity of molten salt was controlled in order to keep the inlet temperature 288 °C and the outlet temperature 565 °C. Although many countries have built stable solar power tower stations [8], there are few reports about the heat transfer characteristics of the tube receiver that is different with normal situation because of the special heating method with semi-circumference heated and semi-circumference adiabatic. Naphon [9] investigated the heat transfer and flow characteristics of the horizontal spiral-coil tube by numerical and experimental methods. Hot and cold water were used as working fluids. Reasonable agreement was obtained from the comparison between the results from the experiment and those obtained from the model. Nevertheless, the results was based on the average value of the whole tube, it cannot shows the local heat transfer characteristics. Wu [10] conducted the experimental study on the heat transfer characteristics of molten salt in a circular tube and found a good agreement between the experimental data of molten salt and the well-known correlations presented by Hausen and Gnielinski respectively. However, the heat transfer performance with uneven heat flux was not analyzed because of some difficulties in experiment. In actual solar thermal power, because of the different concentrated solar radiation and different incident angle, the heat transfer is uneven along the circumference. The local temperature, heat flux and heat transfer coefficient of the tube receiver need to be obtained when the solar plant operates normally. Since the solar receiver is composed of many same single tubes, in this study, the heat transfer characteristics of a single molten salt tube receiver with asymmetric heat flux around the tube is simulated numerically. The numerical simulation results of this paper shows the special distribution of the temperature and heat flux, at the same time the special heat transfer characteristics are obtained whether on a whole or local viewpoint. The results will provide references for the design of the whole tube size, the control of temperature and the heat transfer analysis etc