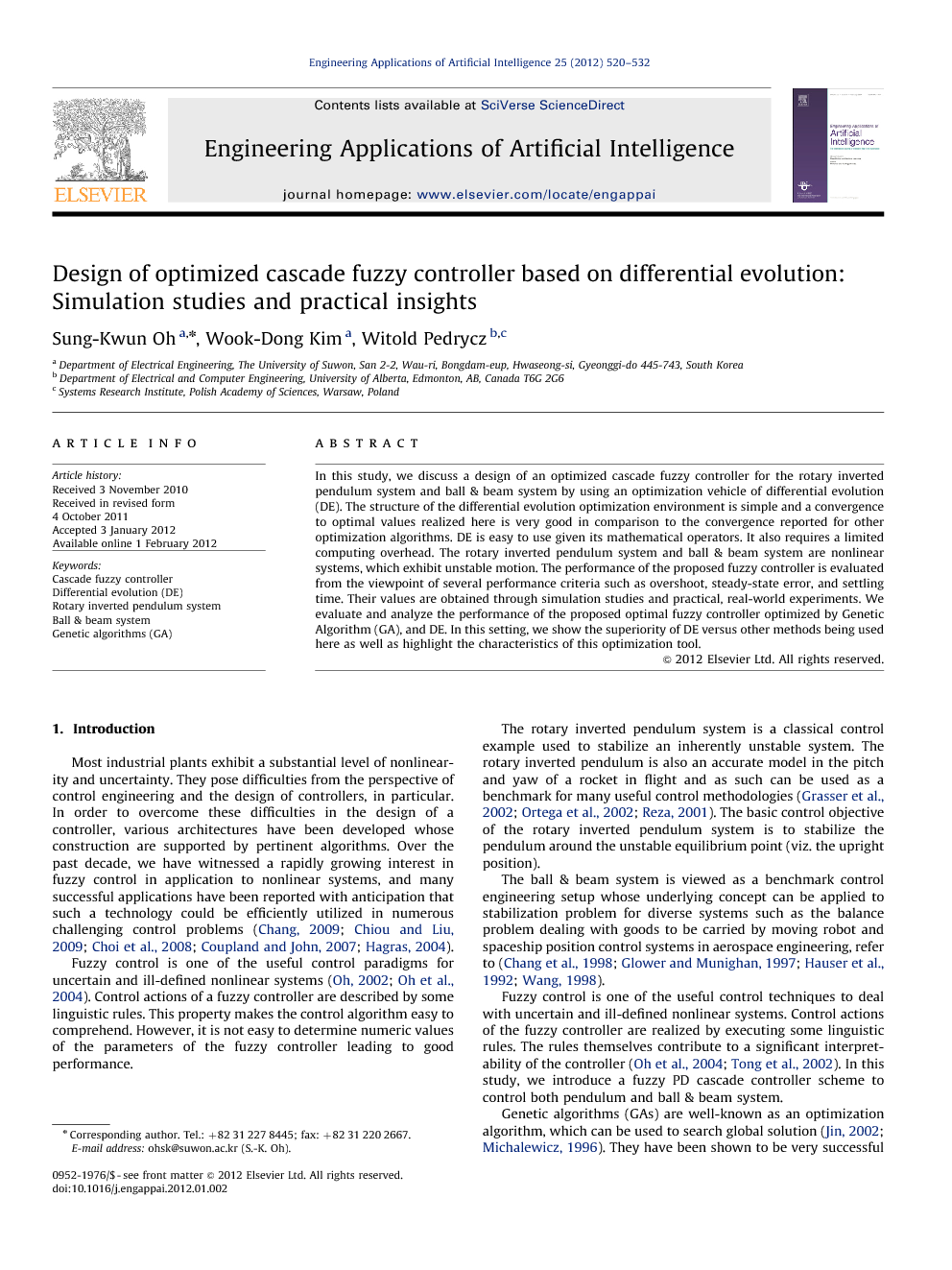 In this study, we discuss a design of an optimized cascade fuzzy controller for the rotary inverted pendulum system and ball & beam system by using an optimization vehicle of differential evolution (DE). The structure of the differential evolution optimization environment is simple and a convergence to optimal values realized here is very good in comparison to the convergence reported for other optimization algorithms. DE is easy to use given its mathematical operators. It also requires a limited computing overhead. The rotary inverted pendulum system and ball & beam system are nonlinear systems, which exhibit unstable motion. The performance of the proposed fuzzy controller is evaluated from the viewpoint of several performance criteria such as overshoot, steady-state error, and settling time. Their values are obtained through simulation studies and practical, real-world experiments. We evaluate and analyze the performance of the proposed optimal fuzzy controller optimized by Genetic Algorithm (GA), and DE. In this setting, we show the superiority of DE versus other methods being used here as well as highlight the characteristics of this optimization tool.

Most industrial plants exhibit a substantial level of nonlinearity and uncertainty. They pose difficulties from the perspective of control engineering and the design of controllers, in particular. In order to overcome these difficulties in the design of a controller, various architectures have been developed whose construction are supported by pertinent algorithms. Over the past decade, we have witnessed a rapidly growing interest in fuzzy control in application to nonlinear systems, and many successful applications have been reported with anticipation that such a technology could be efficiently utilized in numerous challenging control problems (Chang, 2009, Chiou and Liu, 2009, Choi et al., 2008, Coupland and John, 2007 and Hagras, 2004). Fuzzy control is one of the useful control paradigms for uncertain and ill-defined nonlinear systems (Oh, 2002 and Oh et al., 2004). Control actions of a fuzzy controller are described by some linguistic rules. This property makes the control algorithm easy to comprehend. However, it is not easy to determine numeric values of the parameters of the fuzzy controller leading to good performance. The rotary inverted pendulum system is a classical control example used to stabilize an inherently unstable system. The rotary inverted pendulum is also an accurate model in the pitch and yaw of a rocket in flight and as such can be used as a benchmark for many useful control methodologies (Grasser et al., 2002, Ortega et al., 2002 and Reza, 2001). The basic control objective of the rotary inverted pendulum system is to stabilize the pendulum around the unstable equilibrium point (viz. the upright position). The ball & beam system is viewed as a benchmark control engineering setup whose underlying concept can be applied to stabilization problem for diverse systems such as the balance problem dealing with goods to be carried by moving robot and spaceship position control systems in aerospace engineering, refer to (Chang et al., 1998, Glower and Munighan, 1997, Hauser et al., 1992 and Wang, 1998). Fuzzy control is one of the useful control techniques to deal with uncertain and ill-defined nonlinear systems. Control actions of the fuzzy controller are realized by executing some linguistic rules. The rules themselves contribute to a significant interpretability of the controller (Oh et al., 2004 and Tong et al., 2002). In this study, we introduce a fuzzy PD cascade controller scheme to control both pendulum and ball & beam system. Genetic algorithms (GAs) are well-known as an optimization algorithm, which can be used to search global solution (Jin, 2002 and Michalewicz, 1996). They have been shown to be very successful in many applications and in very different domains. However it may get trapped in a sub-optimal region of the search space thus becoming unable to find better quality solutions, especially for irregular and large search space. The ongoing challenge for advanced system control has resulted in a diversity of design methodologies and detailed algorithms. One of the difficulties in controlling complex systems is to derive the optimal values of control parameters such as linguistic control rules and scaling factors and membership functions of the fuzzy controller. Optimal control parameters have an immediate influence on the performance of fuzzy controller. It is difficult to assume that the given expert's knowledge captured in the form of the rules of the fuzzy controller leads to optimal control (Jamaludin et al., 2009 and Mohan and Arpita, 2008). To improve the performance of the controller through adjusting control rules and membership functions one has to seek some optimization vehicle such as e.g., particle swarm optimization, tabu search, or genetic algorithms (Denna et al., 1999). Genetic algorithms have emerged as a sound optimization technique however they are not free from shortcomings. Conventional serial genetic algorithms (SGAs) come with premature convergence problem, which is associated with the reduced diversity of chromosomes occurring in successive generations of the algorithm. DE suggested initially for solving the Chebychev polynomial fitting problem is similar to genetic algorithm (GA) including crossover, mutation and selection process. However, differential evolution algorithm is simpler than GA because it uses a vector concept in populating process. In this paper, we propose an optimized fuzzy controller developed with the use of differential evolution (DE) for both rotary inverted pendulum system and ball beam system. The proposed fuzzy controller is based on the design methodology of cascade controller control system. When designing fuzzy controllers, it is difficult to determine values of the control parameters that are usually obtained by a large of trial-and-error experimentation or by exploiting experience of human experts. Therefore, we propose a new approach to determine optimal parameters of the fuzzy controller using DE. We offer a thorough comparison of the results of experiments for the controller constructed by making use of GAs.

In this paper, we have introduced the design methodology for the fuzzy PD cascade controllers optimized with the aid of DE and showed its application to a highly nonlinear rotary inverted pendulum and ball & beam control system. The rotary inverted pendulum system is nonlinear and exhibits unstable motion. The objective is to control the position of the rotating arm and to make the pendulum to maintain the unstable equilibrium point at the vertical position. We use the DE algorithm of algorithm to optimize the values of the control parameters. As demonstrated by comprehensive simulation results, the overshoot of the optimized fuzzy PD controller is somewhat larger than in case when running other algorithms however the response is faster. The ball & beam system is a well-known control engineering experimental setup exhibits a number of interesting and challenging properties when considered from the control engineering perspective. The position of ball is set through the control of a servo motor. We designed the fuzzy cascade controller based on the GA and DE optimization environments and analyzed the performance of the controllers obtained in this manner. The detailed simulation results of ball & beam system show low overshoot of the response of the system. The fuzzy PD cascade controller optimized with the use of the DE becomes more efficient in terms of overshoot, delay time, rise time, and settling time. The fuzzy PD cascade controller demonstrates a significant level of robustness and stability. The physical setup is slightly different than the simulation setup because of some changing nonlinear properties caused by inertia, error of the position measurement, and difference of initial value.