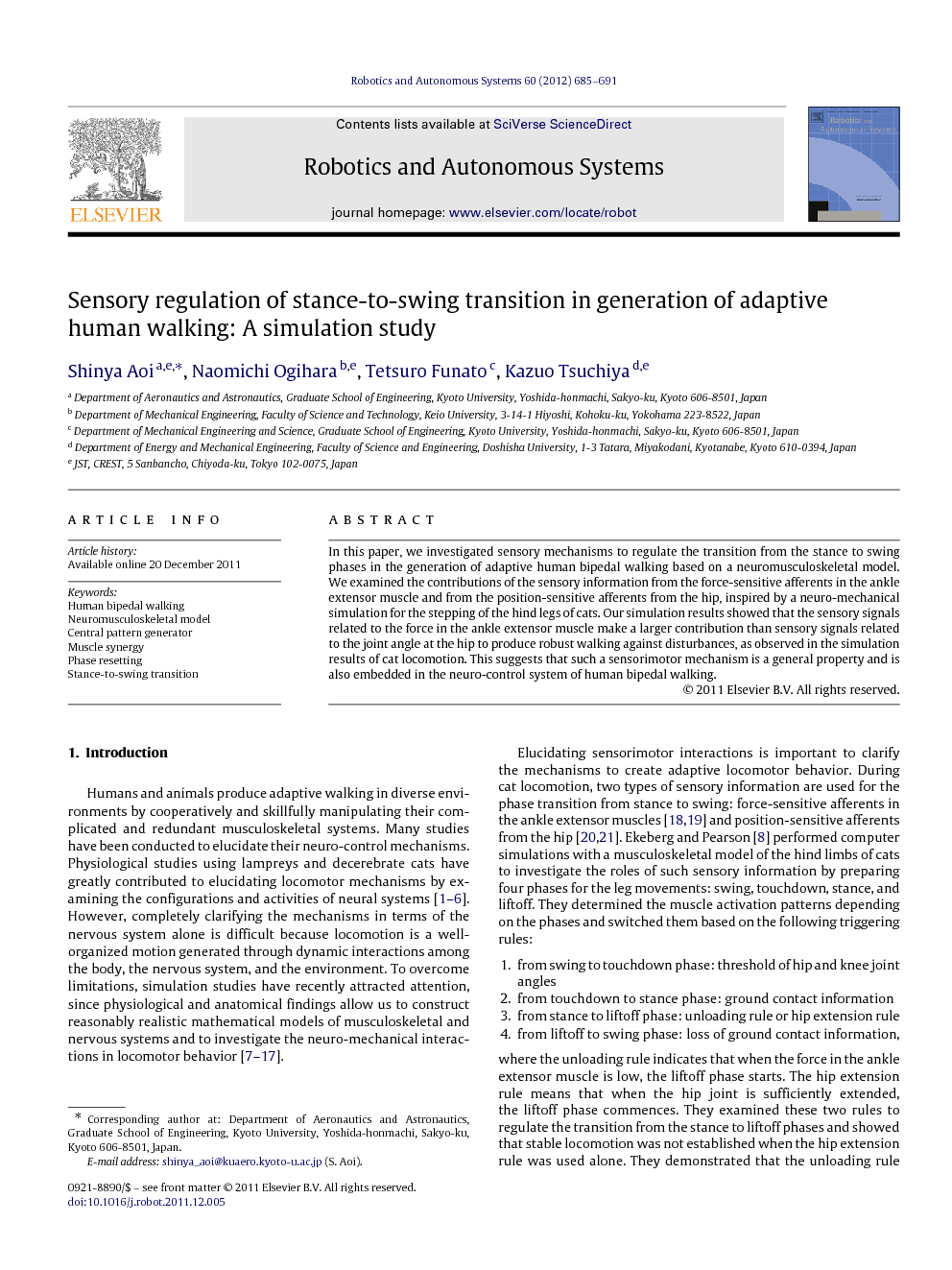 In this paper, we investigated sensory mechanisms to regulate the transition from the stance to swing phases in the generation of adaptive human bipedal walking based on a neuromusculoskeletal model. We examined the contributions of the sensory information from the force-sensitive afferents in the ankle extensor muscle and from the position-sensitive afferents from the hip, inspired by a neuro-mechanical simulation for the stepping of the hind legs of cats. Our simulation results showed that the sensory signals related to the force in the ankle extensor muscle make a larger contribution than sensory signals related to the joint angle at the hip to produce robust walking against disturbances, as observed in the simulation results of cat locomotion. This suggests that such a sensorimotor mechanism is a general property and is also embedded in the neuro-control system of human bipedal walking.

Humans and animals produce adaptive walking in diverse environments by cooperatively and skillfully manipulating their complicated and redundant musculoskeletal systems. Many studies have been conducted to elucidate their neuro-control mechanisms. Physiological studies using lampreys and decerebrate cats have greatly contributed to elucidating locomotor mechanisms by examining the configurations and activities of neural systems [1], [2], [3], [4], [5] and [6]. However, completely clarifying the mechanisms in terms of the nervous system alone is difficult because locomotion is a well-organized motion generated through dynamic interactions among the body, the nervous system, and the environment. To overcome limitations, simulation studies have recently attracted attention, since physiological and anatomical findings allow us to construct reasonably realistic mathematical models of musculoskeletal and nervous systems and to investigate the neuro-mechanical interactions in locomotor behavior [7], [8], [9], [10], [11], [12], [13], [14], [15], [16] and [17]. Elucidating sensorimotor interactions is important to clarify the mechanisms to create adaptive locomotor behavior. During cat locomotion, two types of sensory information are used for the phase transition from stance to swing: force-sensitive afferents in the ankle extensor muscles [18] and [19] and position-sensitive afferents from the hip [20] and [21]. Ekeberg and Pearson [8] performed computer simulations with a musculoskeletal model of the hind limbs of cats to investigate the roles of such sensory information by preparing four phases for the leg movements: swing, touchdown, stance, and liftoff. They determined the muscle activation patterns depending on the phases and switched them based on the following triggering rules: 1. from swing to touchdown phase: threshold of hip and knee joint angles 2. from touchdown to stance phase: ground contact information 3. from stance to liftoff phase: unloading rule or hip extension rule 4. from liftoff to swing phase: loss of ground contact information, where the unloading rule indicates that when the force in the ankle extensor muscle is low, the liftoff phase starts. The hip extension rule means that when the hip joint is sufficiently extended, the liftoff phase commences. They examined these two rules to regulate the transition from the stance to liftoff phases and showed that stable locomotion was not established when the hip extension rule was used alone. They demonstrated that the unloading rule makes a larger contribution than the hip extension rule to the generation of robust locomotor behavior against disturbances, which gives a great insight for sensorimotor integration to produce adaptive locomotor behavior for animals. In our previous work [22], we constructed a neuromusculoskeletal model for human bipedal walking and examined the roles of the phase transitions based on foot-contact information, similar to the transitions from the touchdown to stance phases and from the liftoff to swing phases in [8]. In this paper, we modified our neuromusculoskeletal model, especially the phase transition rule, and investigated the contributions of the sensory information from the force-sensitive afferents in the ankle extensor muscles and from the position-sensitive afferents from the hip for the stance-to-swing transition to create adaptive human bipedal walking. That is, we examined the roles of the unloading and hip extension rules for human bipedal walking. Our simulation results showed that the unloading rule contributes more than the hip extension rule to produce robust bipedal walking against disturbances, as observed in [8], suggesting that such a sensorimotor mechanism is a general property and is also embedded in the neuro-control system of human bipedal walking.