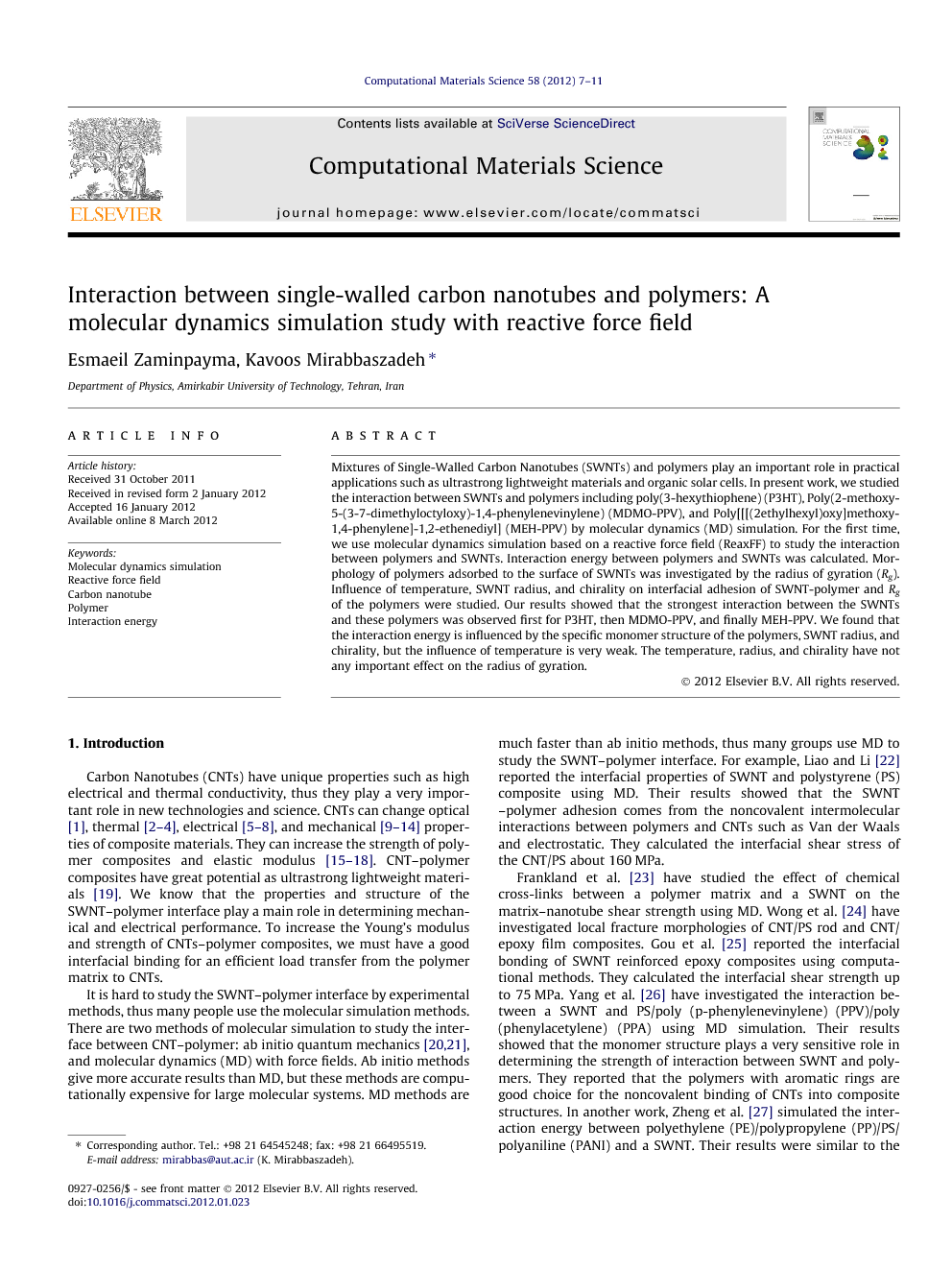 Mixtures of Single-Walled Carbon Nanotubes (SWNTs) and polymers play an important role in practical applications such as ultrastrong lightweight materials and organic solar cells. In present work, we studied the interaction between SWNTs and polymers including poly(3-hexythiophene) (P3HT), Poly(2-methoxy-5-(3-7-dimethyloctyloxy)-1,4-phenylenevinylene) (MDMO-PPV), and Poly[[[(2ethylhexyl)oxy]methoxy-1,4-phenylene]-1,2-ethenediyl] (MEH-PPV) by molecular dynamics (MD) simulation. For the first time, we use molecular dynamics simulation based on a reactive force field (ReaxFF) to study the interaction between polymers and SWNTs. Interaction energy between polymers and SWNTs was calculated. Morphology of polymers adsorbed to the surface of SWNTs was investigated by the radius of gyration (Rg). Influence of temperature, SWNT radius, and chirality on interfacial adhesion of SWNT-polymer and Rg of the polymers were studied. Our results showed that the strongest interaction between the SWNTs and these polymers was observed first for P3HT, then MDMO-PPV, and finally MEH-PPV. We found that the interaction energy is influenced by the specific monomer structure of the polymers, SWNT radius, and chirality, but the influence of temperature is very weak. The temperature, radius, and chirality have not any important effect on the radius of gyration.

Carbon Nanotubes (CNTs) have unique properties such as high electrical and thermal conductivity, thus they play a very important role in new technologies and science. CNTs can change optical [1], thermal [2], [3] and [4], electrical [5], [6], [7] and [8], and mechanical [9], [10], [11], [12], [13] and [14] properties of composite materials. They can increase the strength of polymer composites and elastic modulus [15], [16], [17] and [18]. CNT–polymer composites have great potential as ultrastrong lightweight materials [19]. We know that the properties and structure of the SWNT–polymer interface play a main role in determining mechanical and electrical performance. To increase the Young’s modulus and strength of CNTs–polymer composites, we must have a good interfacial binding for an efficient load transfer from the polymer matrix to CNTs. It is hard to study the SWNT–polymer interface by experimental methods, thus many people use the molecular simulation methods. There are two methods of molecular simulation to study the interface between CNT–polymer: ab initio quantum mechanics [20] and [21], and molecular dynamics (MD) with force fields. Ab initio methods give more accurate results than MD, but these methods are computationally expensive for large molecular systems. MD methods are much faster than ab initio methods, thus many groups use MD to study the SWNT–polymer interface. For example, Liao and Li [22] reported the interfacial properties of SWNT and polystyrene (PS) composite using MD. Their results showed that the SWNT–polymer adhesion comes from the noncovalent intermolecular interactions between polymers and CNTs such as Van der Waals and electrostatic. They calculated the interfacial shear stress of the CNT/PS about 160 MPa. Frankland et al. [23] have studied the effect of chemical cross-links between a polymer matrix and a SWNT on the matrix–nanotube shear strength using MD. Wong et al. [24] have investigated local fracture morphologies of CNT/PS rod and CNT/epoxy film composites. Gou et al. [25] reported the interfacial bonding of SWNT reinforced epoxy composites using computational methods. They calculated the interfacial shear strength up to 75 MPa. Yang et al. [26] have investigated the interaction between a SWNT and PS/poly (p-phenylenevinylene) (PPV)/poly (phenylacetylene) (PPA) using MD simulation. Their results showed that the monomer structure plays a very sensitive role in determining the strength of interaction between SWNT and polymers. They reported that the polymers with aromatic rings are good choice for the noncovalent binding of CNTs into composite structures. In another work, Zheng et al. [27] simulated the interaction energy between polyethylene (PE)/polypropylene (PP)/PS/polyaniline (PANI) and a SWNT. Their results were similar to the Yang group. Xie et al. [28] reported the influence of temperature, radius, and chirality on the interaction between SWNTs and fluorocarbon resins. Their results showed that the interactions between the SWNTs and fluorocarbon resins are not influenced by chirality and temperature but strongly depend on the radius of SWNTs. These studies cannot show macroscopic nanocomposite properties, but they can show an obvious view of the interface between polymers and SWNT. All pervious works used a nonreactive force field such as PCFF, COMPASS [29] and [30], and MM3 [31]. These force fields cannot describe the destruction and construction of chemical bonds in the simulation systems and thus you must build the correct chemical bonds in the system. A reactive force field, ReaxFF, is a bond-order dependent force field that includes covalent interactions via bond-orders. REAX force field was used to many organic materials and its results are close to ab inito results [32], [33], [34] and [35]. In this work, we used MD simulation with REAX Force field to study the interaction between SWNTs and three conjugated polymers including P3HT, MDMO-PPV, and MEH-PPV. So far there has not been any simulation results reported for these polymers with SWNTs. Conjugated polymers show good binding with SWNT, and electron microscopy studies have demonstrated heavy coating of SWNTs by conjugated polymers [36]. In addition, blends of SWNTs and these polymers are used commonly as active materials in organic solar cells [37]. In this type of organic solar cells, these polymers are used as a donor material with SWNTs as an acceptor material. The interface structure and interaction energy play a major role in facilitating of charge transfer between donor and acceptor, and they affect on the efficiency and life time of solar cells [38]. Experimental results show that all P3HT backbone aligns parallel to the SWNT surface, and this increases the overall SWNT-polymer interaction [39].

In this work, we simulated the adhesion of P3HT, MDMO-PPV, and MEH-PPV with SWNTs in a vacuum with a reactive force field. The influence of temperature, chirality and nanotube radius was investigated. This study shows that the interaction between the SWNT and these polymers is not influenced by the temperature, but strongly depend on the SWNT radius and chirality. The interaction increases with increasing radius and chirality angle, thus the armchair nanotube with large radius is the best nanotube type for reinforcement. We found that P3HT adheres better to nanotubes than MDMO-PPV and MEH-PPV, because there is a sulfur atom in its backbone. In addition, we have shown that the total polymer sizes are not changed with varying SWNT curvature and applied temperature, which is a direct effect of their specific rigid structures and high interaction energy.