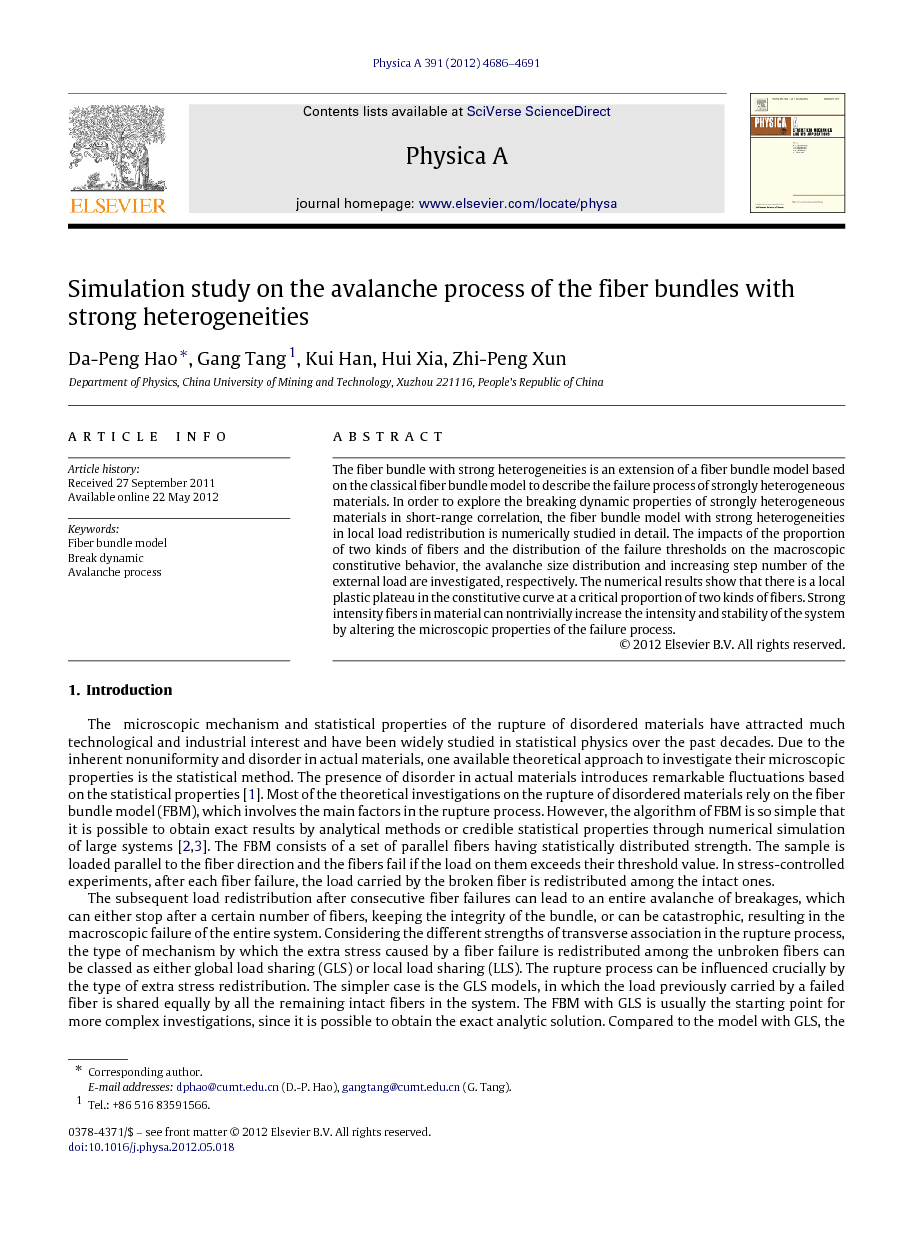 The fiber bundle with strong heterogeneities is an extension of a fiber bundle model based on the classical fiber bundle model to describe the failure process of strongly heterogeneous materials. In order to explore the breaking dynamic properties of strongly heterogeneous materials in short-range correlation, the fiber bundle model with strong heterogeneities in local load redistribution is numerically studied in detail. The impacts of the proportion of two kinds of fibers and the distribution of the failure thresholds on the macroscopic constitutive behavior, the avalanche size distribution and increasing step number of the external load are investigated, respectively. The numerical results show that there is a local plastic plateau in the constitutive curve at a critical proportion of two kinds of fibers. Strong intensity fibers in material can nontrivially increase the intensity and stability of the system by altering the microscopic properties of the failure process.

The microscopic mechanism and statistical properties of the rupture of disordered materials have attracted much technological and industrial interest and have been widely studied in statistical physics over the past decades. Due to the inherent nonuniformity and disorder in actual materials, one available theoretical approach to investigate their microscopic properties is the statistical method. The presence of disorder in actual materials introduces remarkable fluctuations based on the statistical properties [1]. Most of the theoretical investigations on the rupture of disordered materials rely on the fiber bundle model (FBM), which involves the main factors in the rupture process. However, the algorithm of FBM is so simple that it is possible to obtain exact results by analytical methods or credible statistical properties through numerical simulation of large systems [2] and [3]. The FBM consists of a set of parallel fibers having statistically distributed strength. The sample is loaded parallel to the fiber direction and the fibers fail if the load on them exceeds their threshold value. In stress-controlled experiments, after each fiber failure, the load carried by the broken fiber is redistributed among the intact ones. The subsequent load redistribution after consecutive fiber failures can lead to an entire avalanche of breakages, which can either stop after a certain number of fibers, keeping the integrity of the bundle, or can be catastrophic, resulting in the macroscopic failure of the entire system. Considering the different strengths of transverse association in the rupture process, the type of mechanism by which the extra stress caused by a fiber failure is redistributed among the unbroken fibers can be classed as either global load sharing (GLS) or local load sharing (LLS). The rupture process can be influenced crucially by the type of extra stress redistribution. The simpler case is the GLS models, in which the load previously carried by a failed fiber is shared equally by all the remaining intact fibers in the system. The FBM with GLS is usually the starting point for more complex investigations, since it is possible to obtain the exact analytic solution. Compared to the model with GLS, the more realistic case is the model with LLS. A special case of the LLS is the model with a one-dimensional geometry where the two nearest neighbor fibers take up all the extra stress caused by a fiber failure. Due to the local spatial correlations, the analytic treatment of LLS bundles has serious limitations. Most of the studies in this case rely on large-scale computer simulations [4]. The main property of the breakdown process in fiber bundles is the size distribution of the burst avalanches, which is one of the most important characteristics of the microscopic fracture process and can be monitored experimentally by acoustic emission techniques [5], [6] and [7]. In the GLS limit, the avalanche distributions of fiber bundles with various fracture threshold distributions follow a universal power law with an exponent −5/2[8], [9] and [10]. In the LLS case, however, the avalanche size distribution is more complex, depending on the specific form of the threshold distributions [11] and [12]. In order to obtain a more realistic description, especially for the failure of composites, a series of deformation models based on the classical FBM have been introduced. Pradhan et al. [13], [14] and [15] presented a series of papers to investigate the breakdown of a random fiber bundle model with a lower cutoff in fiber threshold distribution, both in GLS and in LLS. The existence of a crossover behavior near criticality makes it possible to predict the imminent global failure point of the system [16] and [17]. Raischel et al. [18] studied the failure properties of fiber bundles with a finite lower cutoff of the strength disorder, varying the range of interaction between the limiting cases of GLS and LLS. Computer simulations revealed that, at the interaction local load sharing, the avalanche distribution of the FBM has a more complicated shape. Divakaran and Dutta [19] investigated avalanche size distributions considering the FBM with mixed threshold distributions. The results show that, in the GLS case, the avalanche size distributions obey a universal power law. Some research has also considered the FBM with a continuous damage law, which means that the stiffness of fibers gradually decreases in consecutive failure events before complete rupture [20], [21], [22] and [23]. Recently, Hidalgo et al. [24] introduced the FBM with strong heterogeneities, based on the classical FBM. The system was assumed to have two components, one of which is characterized by a strength distribution, while the other one is unbreakable. Under the GLS condition, the presence of unbreakable elements has a substantial effect on the fracture process of the system. In the previous works, Hidalgo et al. considered GLS in the form of load redistribution after a single fiber failure. By comparison, the LLS can better describe the stress redistribution in actual heterogeneous materials, also the method of stress redistribution can have a decisive impact on the fracture process [4]. In order to reveal the deeper properties of the fracture process of strongly heterogeneous materials in short-range correlation, the FBM with strong heterogeneities in LLS, based on Ref. [24], is studied numerically in detail. Specifically, the impacts of the proportion of two kinds of fibers and the distribution of the failure thresholds on the macroscopic constitutive behavior, the critical stress, the maximum avalanche size, the avalanche size distribution, and increasing step number of the external load is investigated. The numerical results show that there is a local plastic plateau in the constitutive curve at a critical proportion of two kinds of fibers. With a small proportion of unbreakable fibers, the overall avalanche size distribution does not satisfy the power-law relationship, only in the limit of large avalanche size will the distribution meet the asymptotic power-law relationship, similar to the one of classical FBM in LLS. When the proportion of unbreakable fibers is large, the whole avalanche size distribution shows approximate power-law behavior.

The microscopic dynamic breaking mechanism of the strongly heterogeneous material is investigated in detail by numerical simulation of the FBM with strong heterogeneities. Comparing to the GLS in the form of load redistribution in Ref. [24], in this paper we employ the LLS case, which is the extreme form of the local interaction in actual heterogeneous materials. Due to the lack of an effective analytical method for the FBM in LLS, in this paper the FBM with strong heterogeneities in the LLS case is numerically simulated. The influence of the fraction of unbreakable fibers and the distribution of the breaking threshold on the macroscopic constitutive behavior, the critical stress, the maximum avalanche size, the avalanche size distribution, and the increasing step number of the external load are investigated, respectively. At the same time, based on the above results, we comprehensively analyze the microscopic rupture mechanism of the model in LLS. The numerical results reveal that the presence of unbreakable fibers has a significant impact on the fracture process of FBM, both on microscale and macroscale. In the macroscopic constitutive law, there is a local plastic plateau in the constitutive curve at a critical fraction of unbreakable fibers αc, and the constitutive law is divided into two cases, one is a monotonic constitutive relation, the other is a non-monotonic curve with a local peak. As α increases, the maximum load before the normal fibers fail completely increases linearly. In the micro-level, the maximum avalanche size and the avalanche size distribution are distinctly affected by the fraction α, and as α increases the avalanche size distribution becomes closer to power-law relationship. In the failure process, the step number that external load increase before the final catastrophic failure reflects the relaxation process of the material fracture and reaches a maximum in the vicinity of the critical fraction αc. The above properties of the model illustrate that a strong component in the heterogeneous materials can have a significant impact on the fracture process of the materials, both on micro-scale and macro-scale. Beside its theoretical significance, the results of this paper may also extend to synthesizing composite materials with better performance.