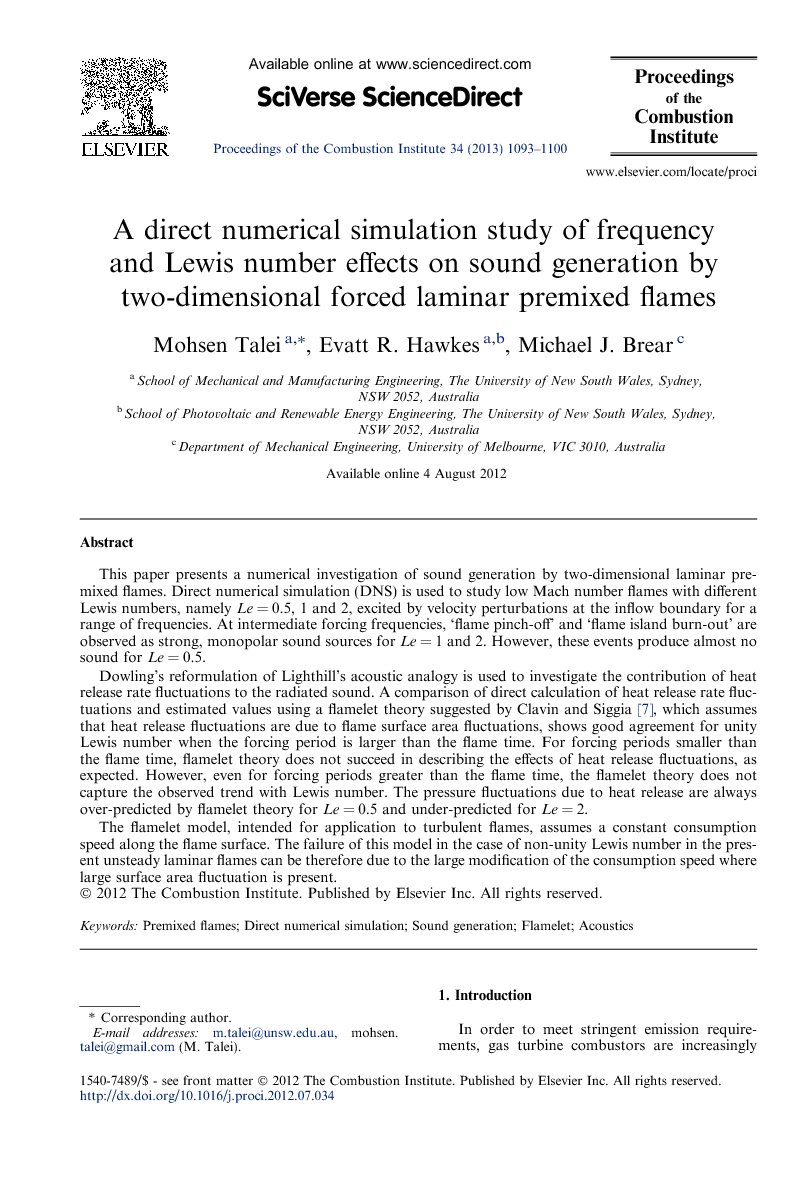 This paper presents a numerical investigation of sound generation by two-dimensional laminar premixed flames. Direct numerical simulation (DNS) is used to study low Mach number flames with different Lewis numbers, namely Le = 0.5, 1 and 2, excited by velocity perturbations at the inflow boundary for a range of frequencies. At intermediate forcing frequencies, ‘flame pinch-off’ and ‘flame island burn-out’ are observed as strong, monopolar sound sources for Le = 1 and 2. However, these events produce almost no sound for Le = 0.5. Dowling’s reformulation of Lighthill’s acoustic analogy is used to investigate the contribution of heat release rate fluctuations to the radiated sound. A comparison of direct calculation of heat release rate fluctuations and estimated values using a flamelet theory suggested by Clavin and Siggia [7], which assumes that heat release fluctuations are due to flame surface area fluctuations, shows good agreement for unity Lewis number when the forcing period is larger than the flame time. For forcing periods smaller than the flame time, flamelet theory does not succeed in describing the effects of heat release fluctuations, as expected. However, even for forcing periods greater than the flame time, the flamelet theory does not capture the observed trend with Lewis number. The pressure fluctuations due to heat release are always over-predicted by flamelet theory for Le = 0.5 and under-predicted for Le = 2. The flamelet model, intended for application to turbulent flames, assumes a constant consumption speed along the flame surface. The failure of this model in the case of non-unity Lewis number in the present unsteady laminar flames can be therefore due to the large modification of the consumption speed where large surface area fluctuation is present.

In order to meet stringent emission requirements, gas turbine combustors are increasingly being designed to operate in a so-called ‘premixed mode’. However, these combustors are susceptible to a phenomenon called ‘thermo-acoustic instability’ which is due to the interaction between the flame and the combustor acoustics e.g. [1]. In order to predict thermo-acoustic instability in combustors, the mechanism of sound generation by flames and also the interaction of acoustic waves with flames must both be understood. Combustion-generated sound is usually categorised broadly into two forms: direct and indirect [2], [3], [4], [5] and [6]. Direct sound radiates from the flame, whilst indirect sound is produced downstream of the flame by flow inhomogeneities. Most of the previous studies of direct sound generation from combustion have identified fluctuations of the heat release rate as a major source of sound [7], [8], [9], [10], [11], [12], [13], [2] and [1]. In particular, Strahle [8] constructed the theory of combustion noise for a premixed flame and argued that the sound generated is strongly dependent on the flame structure via a monopolar source term. Flame structure is in turn dependent on the combustion regime. Many practical turbulent flames exist within the flamelet regime of combustion in which the thickness of the reaction zone is smaller than the dissipative scales of turbulence. In this situation, the flame can be approximated as a corrugated sheet-like structure, a fact which has been used extensively in the development of models of premixed turbulent combustion [14] and [15]. Naturally, attempts have been made to use flamelet theory to predict sound. In a flamelet model, heat release fluctuations are intimately connected with surface area fluctuations. Clavin and Siggia [7] used Strahle’s formulation [16] with the corrugated flamelet approximation to describe the total intensity of sound emitted by a flame as a function of flame surface area. Schuller et al. [17] have later shown that the interaction of strong variations in flame surface area and harmonic forcing leads to an increase in radiated sound. Despite this progress, there has been little direct assessment of whether a description of a flame as a thin surface can adequately predict the effects of heat release fluctuation on sound. A flamelet model might adequately represent the mean heat release rate, but fail to represent its time derivative, for example if local correlations of flame speed and flame stretch were important. In a previous study [18] we investigated the response of two-dimensional flames with unity Lewis number to acoustic forcing. It was found that for a range of forcing frequencies, flame annihilation occurred, and that these annihilation events were strong sources of sound. Two kinds of annihilation events were identified. The first type, which was termed flame ‘pinch-off’, occurred when two flames, which were curved such that the centre of curvature was in the products, expanded by propagation and eventually collided and locally annihilated. The collision then led to the formation of a discrete pocket of unburned reactants, which was eventually consumed, leading to the second type of annihilation, ‘island burn-out’. Both types of events can be viewed essentially as rapid destructions of flame surface area. Other studies have similarly pointed to rapid flame surface area destruction as an important source of sound [19], [20] and [21]. It is well known that the response of flame surface area in perturbed premixed flames is strongly dependent on the Lewis number of the deficient reactant [22], [23] and [24]. Flame surface area growth rates in response to perturbations tend to decrease with Lewis number. Flames with sufficiently low Lewis number can be diffusive-thermally unstable, where large flame surface area changes can occur in response to very small perturbations. Thus, with the assumption that flame surface area fluctuations control heat release fluctuations, it can be expected that Lewis number should influence sound generation. In Refs. [25] and [26] we investigated the mechanism of sound generation from idealised laminar annihilation events in one-dimensional planar, axisymmetric and spherically symmetric configurations. For unity Lewis number, a theoretical description of the flame surface as a thin sheet was adequate to quantitatively predict pressure in these cases, which do not include forcing by the flow. In addition, Lewis number was found to have a strong influence on the resulting sound, with larger Le resulting in more sound produced. Thus, summarising the above, flame surface area fluctuations are believed to result in a source of sound generation. However, limits of validity of the approximation of the flame as a thin surface to predict this sound are not well established, even for unity Lewis number. Lewis number has been shown in previous studies to affect surface area dynamics, and in one-dimensional flame annihilations to affect sound, but the coupling of these two effects has not been studied. The present study will investigate Lewis number and forcing frequency effects on sound generation from excited laminar flames. The aims of the study are to compare qualitatively the effects of Lewis number on the flame dynamics and sound generation, and assess the ability of a flamelet model to predict the heat release source term as Lewis number and forcing frequency are varied.

This paper presented a numerical study of the sound radiated by acoustically excited laminar flames of different Lewis numbers. Lewis numbers of 0.5, 1 and 2 were considered. All cases were acoustically excited at the inflow with the same amplitude and the same velocity profile. Consistent with previous studies, Lewis number was found to affect the perturbations of the flame surface. The lower Lewis number cases generally featured greater perturbations. It was observed that at St = 0.025 and 0.02, flame annihilation events occurred for all of the Le considered and were significant monopolar sound sources for Le = 1 and 2. However, these same annihilation events produced almost no sound for Le = 0.5, despite the geometry of the annihilation for Le = 0.5 resulting in a larger annihilation region. Dowling’s reformulation of Lighthill’s equation was used to examine the contribution of the heat release rate fluctuations to the radiated sound. The pressure due to heat release fluctuations was calculated directly from the DNS and from a flamelet model due to Clavin and Siggia which assumes the heat release fluctuations are due only to fluctuations of flame surface area. The results confirmed the validity of the theory for unity Lewis number and high Damköhler number since pressure was only slightly under-predicted. As expected, it was found the theory was not valid for low Damköhler number. In contrast, the theory was found to be unable to predict trends with Lewis number. The theory always over-predicted sound for Le = 0.5 and under-predicted sound for Le = 2. Moreover, even qualitative trends comparing surface area fluctuations and heat release fluctuations were not consistent and sometimes showed opposite trends with Lewis number. The simulations mostly showed that increasing Le increased sound, but either a decreasing or weak trend of pressure from surface area fluctuations (as per the flamelet model) with Le was observed. The failure of the flamelet model in these unsteady laminar simulations suggests that the variation of the local consumption speed due to curvature and stretching is important for understanding Lewis number effects on sound generation. Further work is needed to assess the situation for turbulent flames, since the balance of the relative effects of surface area changes and local changes of consumption speed could be different.