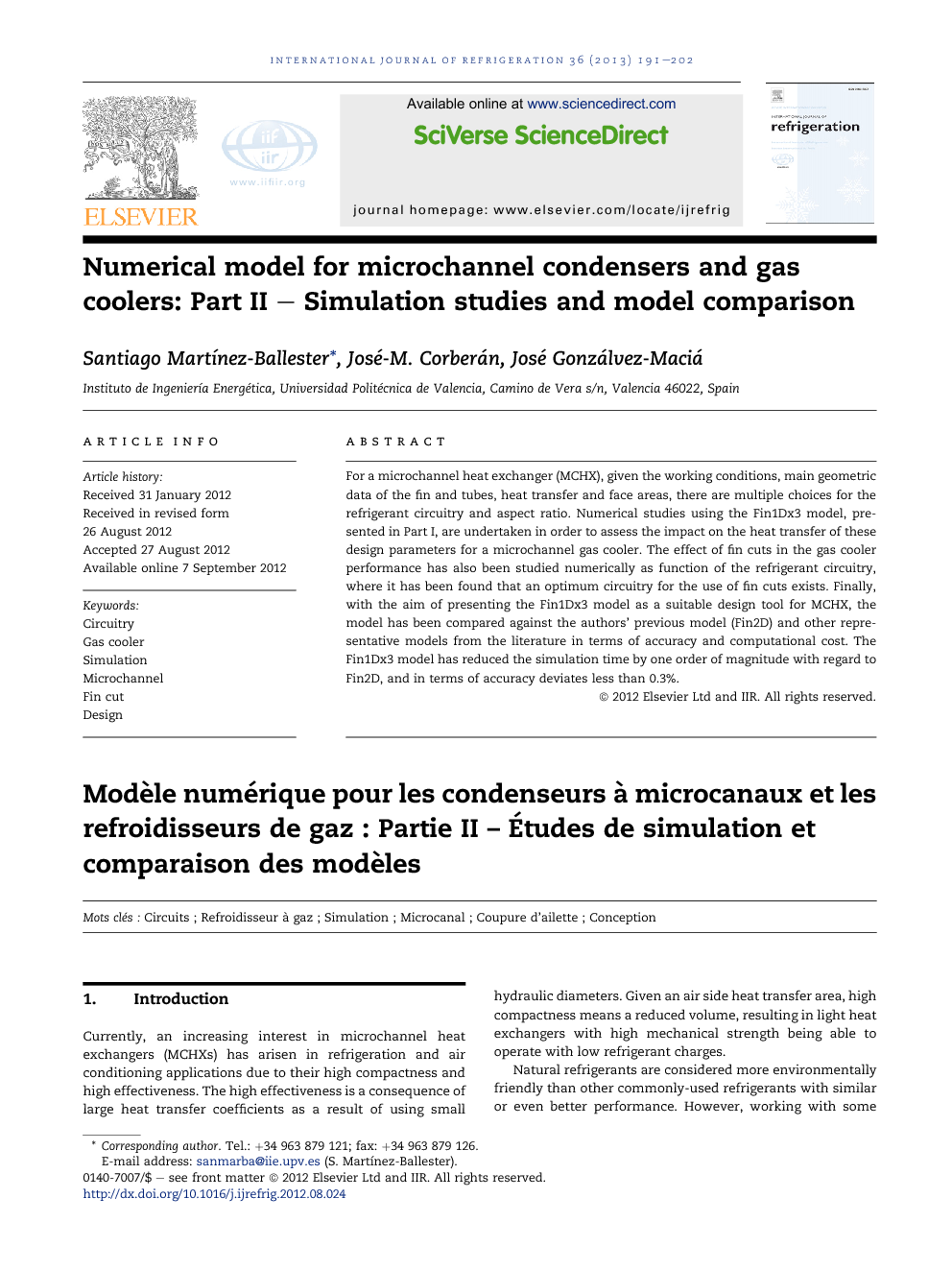 For a microchannel heat exchanger (MCHX), given the working conditions, main geometric data of the fin and tubes, heat transfer and face areas, there are multiple choices for the refrigerant circuitry and aspect ratio. Numerical studies using the Fin1Dx3 model, presented in Part I, are undertaken in order to assess the impact on the heat transfer of these design parameters for a microchannel gas cooler. The effect of fin cuts in the gas cooler performance has also been studied numerically as function of the refrigerant circuitry, where it has been found that an optimum circuitry for the use of fin cuts exists. Finally, with the aim of presenting the Fin1Dx3 model as a suitable design tool for MCHX, the model has been compared against the authors’ previous model (Fin2D) and other representative models from the literature in terms of accuracy and computational cost. The Fin1Dx3 model has reduced the simulation time by one order of magnitude with regard to Fin2D, and in terms of accuracy deviates less than 0.3%.

The present work analyzes the impact of some design parameters of MCHXs on its performance. These parameters were the number of refrigerant passes, aspect ratio and the effect of fin cuts. The success of simulation tools to this end depends on the assumptions of the model, i.e. some parameters produce effects due to phenomena not taken into account by the model. For instance, a model that does not account for heat conduction between tubes cannot study the effect of the aspect ratio; otherwise, the results would be always the same. The numerical studies presented were carried out using a model for the MCHXs that uses the novel approach Fin1Dx3, presented in Part I (Martínez-Ballester et al., 2012), which takes into account: heat conduction between tubes, fin cut or continuous fin, detailed air discretization, 2D longitudinal heat conduction along the tube and the effects of non-mixed air in the Y direction. For a gas cooler working with CO2 under transcritical pressures, the main conclusions of the simulation studies were: • For a gas cooler where no phase change occurs, heat transfer is always increased by increasing the number of refrigerant passes, regardless of the increase in pressure drop. • The fin cuts always increase the heat transfer. In the gas cooler analysed, the improvement with regard to the continuous fin depends on the air velocity and number of refrigerant passes: the lower the velocity the greater the improvement in capacity. There is an optimum value for the number of refrigerant passes, regardless of air velocity, which is 3 passes for the case analysed. The improvement in heat transfer was as much as 3%. • Regarding the aspect ratio of a serpentine heat exchanger, given a heat transfer area and a face area, the best aspect ratio corresponds to a gas cooler with a reduced length (L) and large height (H). The reason is based on the fact that this configuration reduces heat conduction between tubes. Numerical studies on the accuracy and computational cost were presented in order to compare the proposed models of Fin1D and Fin1Dx3 with regard to the authors’ previous models and other representative models from the literature. The main conclusions of these comparisons were the following: • The solution time of Fin1Dx3 has been reduced by one order of magnitude with regard to Fin2D, whereas the differences in the results are less than 0.3%, which are considered negligible for practical applications. The computation time difference between Fin1Dx3 and Fin1D was determined to be double. • Corrected-Fin can lead to accurate results when compared with a model with an equivalent approach that models heat conduction between the tubes in a more fundamental way, such as Fin1Dx3. The difference between the predicted results from both models was between 1% and 2%. The computational costs of the Fin1D and Corrected-Fin models are the same. • Nevertheless, the authors would like to emphasise the fact that the present work shows no computational saving or advantage in accuracy by adding correction terms to an approach that uses adiabatic-fin-tip efficiency rather than a more fundamental approach, regarding the phenomena of heat conduction between tubes, like Fin1D. • By comparison of deviations between the Fin1D, Corrected-Fin and Fin1Dx3 models, it was concluded that the main factor responsible for the differences between them was the effect of non-mixed air along the fin height.