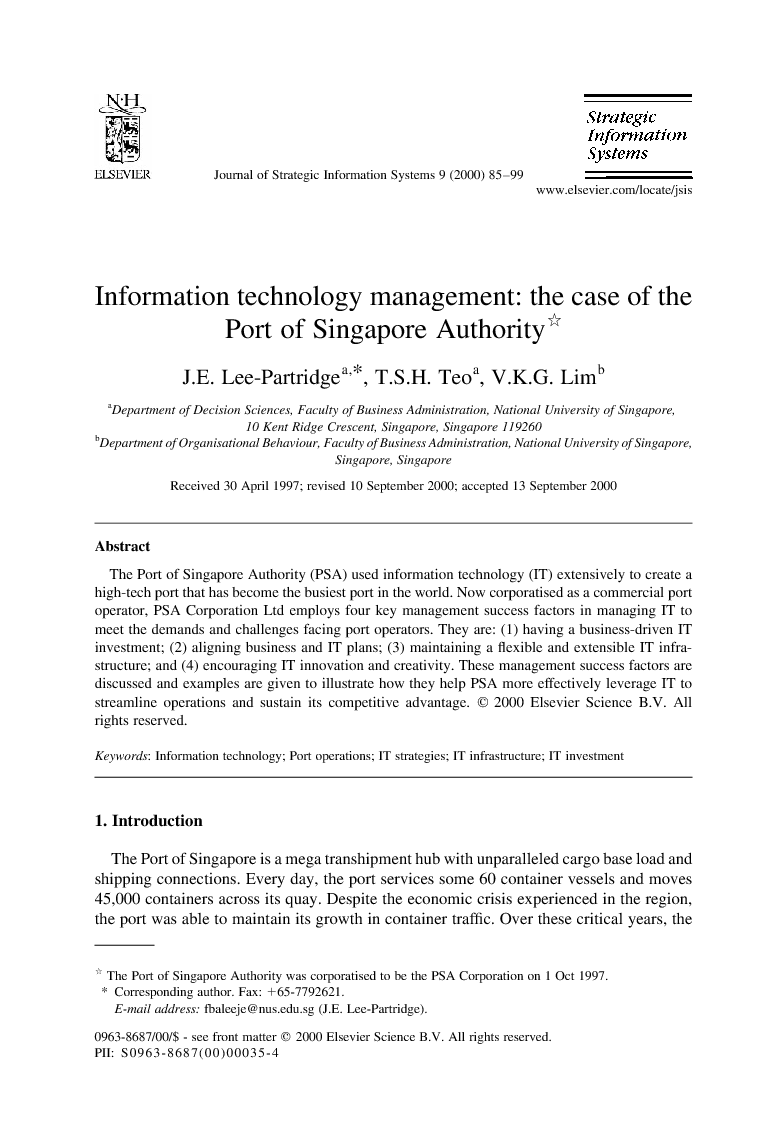 The Port of Singapore Authority (PSA) used information technology (IT) extensively to create a high-tech port that has become the busiest port in the world. Now corporatised as a commercial port operator, PSA Corporation Ltd employs four key management success factors in managing IT to meet the demands and challenges facing port operators. They are: (1) having a business-driven IT investment; (2) aligning business and IT plans; (3) maintaining a flexible and extensible IT infrastructure; and (4) encouraging IT innovation and creativity. These management success factors are discussed and examples are given to illustrate how they help PSA more effectively leverage IT to streamline operations and sustain its competitive advantage.

The Port of Singapore is a mega transhipment hub with unparalleled cargo base load and shipping connections. Every day, the port services some 60 container vessels and moves 45,000 containers across its quay. Despite the economic crisis experienced in the region, the port was able to maintain its growth in container traffic. Over these critical years, the container traffic grew from 12.94 million TEUs (twenty foot equivalent units) in 1996 to 14.12 million TEUs in 1997 to 15.1 million TEUs in 1998 and 15.9 million TEUs in 1999. With the regional economic recovery, the port has already seen an increase in cargo volume. The first quarter of 2000 saw the handling of 4.2 million TEUs, a 15.4% increase compared to the same period in 1999. The port also set a world record in handling 1.5 million TEUs in a single month in March 2000; no other container terminal operator has handled such a high volume in a single location within a single month anywhere in the world. PSA has six terminals to accommodate all types of vessels — container ships, break bulk carriers, cargo freighters, coasters, lighters, and ocean liners — calling in its waters. The six terminals are Tanjong Pagar Terminal, Keppel Terminal, Brani Terminal, Pasir Panjang Terminal, Pasir Panjang Wharves and Sembawang Wharves. The terminals are purpose-built facilities for container vessels while the wharves are multi-purpose facilities for all kinds of vessels. The management of the terminals and wharves lies in the hands of PSA Corp's Container Terminals Division and the Logistics Division, respectively. The Maritime and Port Authority (MPA), formed out of the old Port of Singapore Authority (PSA) and several departments of the then Ministry of Communications, is the landlord and port regulator. Maritime trade is becoming an increasingly important part of Southeast Asia's economic development. Countries in the region like Malaysia, Indonesia and Hong Kong are making efforts to improve their port services and to challenge Singapore's position as a dominant shipping hub. Despite the competition, the Port of Singapore continues to outshine its neighbouring ports. In the Global Competitiveness Report 1999 published by the World Economic Forum, the Singapore port achieved a high score of 6.76 out of a possible 7 in terms of how well the port facilities met business requirements as compared to a 6.38 given to the Hong Kong SAR port (see Table 1for a ranking of ports as provided by the report). In 1999, PSA Corp was awarded the “Best Container Terminal” by the Lloyd's List Maritime Asia. In March 2000, at the 14th Asian Freight Industry Awards organised by Cargonews Asia1, the Port of Singapore won the Best Seaport (Asia) award for the twelfth time, and PSA Corp. won the Best Container Terminal Operator (Asia) award for the eleventh time. These awards give due recognition for the excellent services provided by the Singapore Port and PSA Corp. Increasing competition from its neighbouring ports and the pressure to maintain a high standard of service for the shipping community are two important factors that motivated PSA to work hard at making the Singapore port the best port in Asia. Having an excellent infrastructure is key to the success of Singapore as a global shipping hub; information technology forms an important element of this infrastructure. In showcasing its information technology capabilities on its web page (http://www.psa.com.sg), PSA points to the fact that “the battleground of the future will be the fast and accurate exchange of information between (itself) and its customers, suppliers, and other container terminal around the world.” Consequently, PSA has invested hundreds of million of dollars in IT over the last 5 years so as to keep pace with the intensity of port operations. The investments include a computer network that is purported to be the largest network in Singapore. Computer applications have been developed to support every facet of PSA's administration, planning, and operation. Mr Eric Lui2, the former Director of Information Technology (IT), noted that PSA “runs one of the most technologically advanced ports in the world.”

The Port of Singapore has a long-standing reputation of being the best seaport in Asia and one of the best in the world. In its relentless pursuit to maintain its position amidst keen competition from neighbouring ports, PSA has harnessed IT strategically to improve the efficiency and effectiveness of port operations not only for its own staff but also for other port users. The key message in this case is that PSA has been able to leverage on IT to remain competitive through having a business-driven IT development, aligning business and IS plans, maintaining a flexible and extensible IT infrastructure and encouraging creativity and innovation among its IT personnel. Although these four success factors have been emphasised in past research, this paper contributes to a better understanding of how they are actually implemented in an organisation, in this instance, PSA. Furthermore, since past research has also advocated a wide range of factors for effective IT management, it makes it difficult for firms to decide which factors are most important. In this paper, we have highlighted four key success factors which have been found to play a crucial role in PSA's success. The four success factors can also be viewed as best practices in IT management. By paying attention to these best practices, practitioners can enhance the effectiveness of their IT management. In addition, firms should choose a CIO (or Director of IT) that is able to add value in key business areas. While the case highlighted practices that may be context specific, they can nevertheless provide other organisations with insights that are pertinent for achieving excellence in IT management.