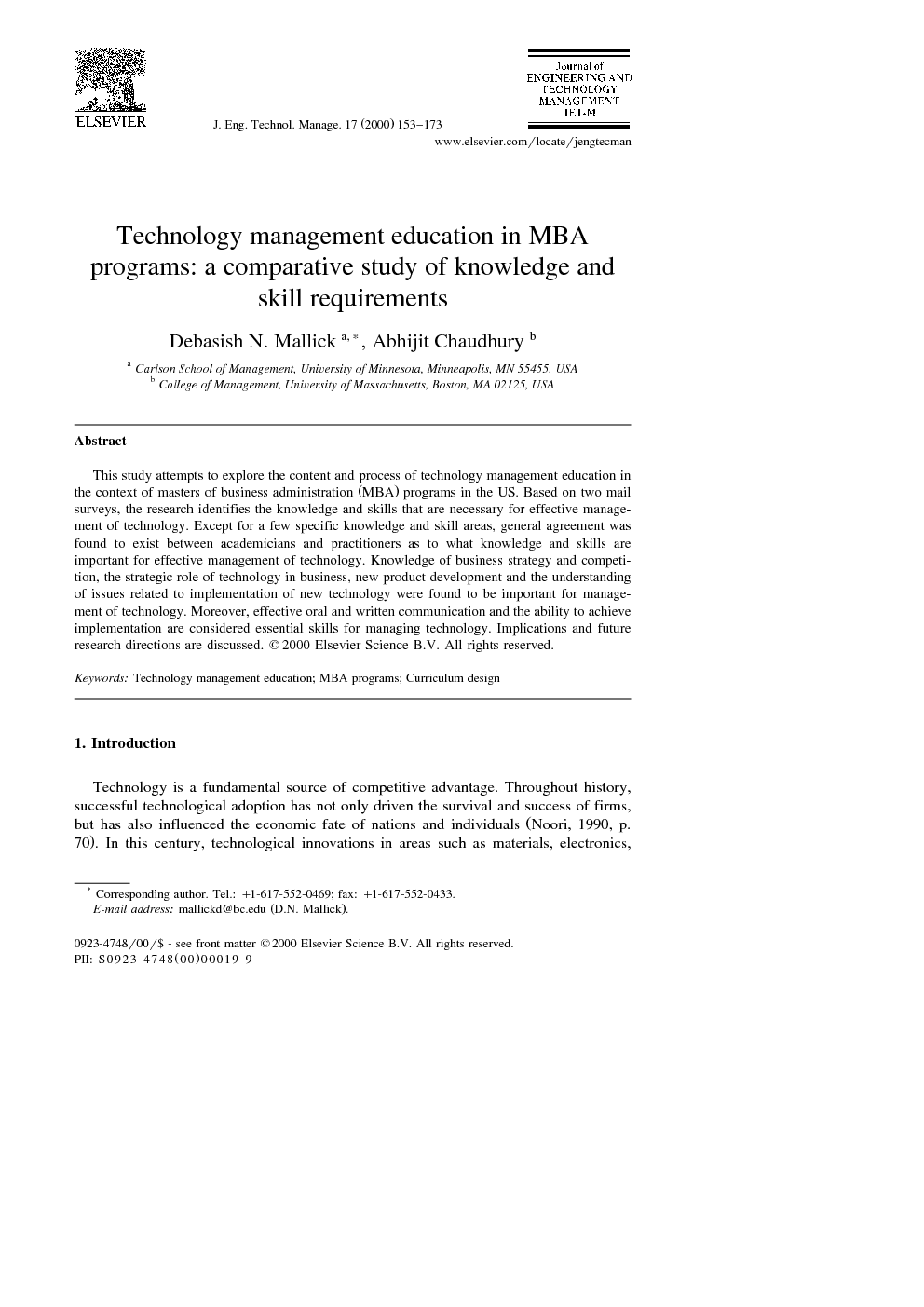 Technology is a fundamental source of competitive advantage. Throughout history, successful technological adoption has not only driven the survival and success of firms, but has also influenced the economic fate of nations and individuals (Noori, 1990, p. 70). In this century, technological innovations in areas such as materials, electronics, aerospace, computers, telecommunication and biotechnology have helped to establish the US as a dominant force in the world economy. Yet, concerns about “our effectiveness in generating and exploiting technology” have continued to persist (Steele, 1989, p. xvii). For example, The MIT Commission on Industrial Productivity cites “weak technology management practice” as a major cause for the decline of competitiveness of many key US industries (Dertouzos et al., 1990). There is a general realization that the “genius of the future lies not in technology alone, but in the ability to manage it” (slogan of Bell Atlantic) (Kocaoglu, 1990). The focus of this investigation is on technology management, vis-à-vis engineering management. While there are common issues shared between the two fields, “the universe of activities firms need to manage to develop and implement technology is much broader in scope than the engineering function alone” (Steele, 1989). Badawy (1995), for example, observes that “Engineering management concerns the process of managing the engineering function itself. Often it is concerned with managing the corporate engineering function as well as its interfaces with other corporate functions. Management of technology is a much broader concept than engineering management”. Management of technology links engineering, science, and management disciplines to plan, develop, and implement technological capabilities to shape and accomplish the strategic and operational objectives of an organization (NRC, 1987). Engineering management, in contrast to technology management, is a much older subject. A survey of over 3000 universities worldwide identified 159 programs in engineering management and related subjects in 1994. The engineering schools offered a majority of these programs. While engineering management is an established discipline with a considerable history, management of technology has yet to be recognized as a discipline (NRC, 1987). Even though there is a history of vigorous research in areas relating to management of technology, there are far fewer programs in the area of technology management. The number of programs bearing the title, “management of technology” had reached 20 by 1994, and there were 22 other programs that were similar in nature. Of these 42 programs, only 16 were offered by business schools alone, 11 were offered jointly by engineering and business schools, and the remaining 15 were offered by engineering schools (Kocaoglu, 1994). In business schools currently, far fewer students are being educated in the area of technology management than in other established business disciplines such as finance, marketing, and operations (Sheridan, 1993). In a business environment dominated by technology, executives with little or no technical background are often required to make decisions relating to their firm's technology. A survey of 236 large US companies revealed that almost 50% of technology-related decisions are made by executives with only a general management background (Maglitta, 1994). These decisions have a significant impact on customers, employees and other stakeholders, as well as on the bottom-line in perhaps unintended ways. As a result, there has been a growing recognition by both the business community and business schools of the role of technology in the success of business organizations NRC, 1987, Solow, 1988 and Porter, 1996. Accordingly, business schools in the US are being encouraged to introduce technology management courses and programs into their curriculum AACSB, 1997, Badawy, 1995, Badawy, 1998, Kocaoglu, 1994 and Burgunder, 1995. However, one of the major challenges confronting both academicians and practitioners is the need to know what knowledge and skills managers must possess in order to successfully manage technology. Likewise, there is also a need to identify the appropriate pedagogy for teaching technology management NRC, 1987 and Schillinger and Wiener, 1993. This study explores such issues relating to the content and process of technology management education in the context of MBA programs in the US. This paper is organized into six sections. Section 2 presents the research objectives and discusses the relevant literature. Section 3 goes on to describe the questionnaire based, mail survey methodology used to collect the data. The survey was administered in two phases: the first focused on the academicians, while the second phase targeted to practitioners. Section 4 of this paper presents the results of both surveys. Finally, Section 5 summarizes the contributions of this study and discusses their implications. The limitations of this study and directions for future research are also discussed in this section.