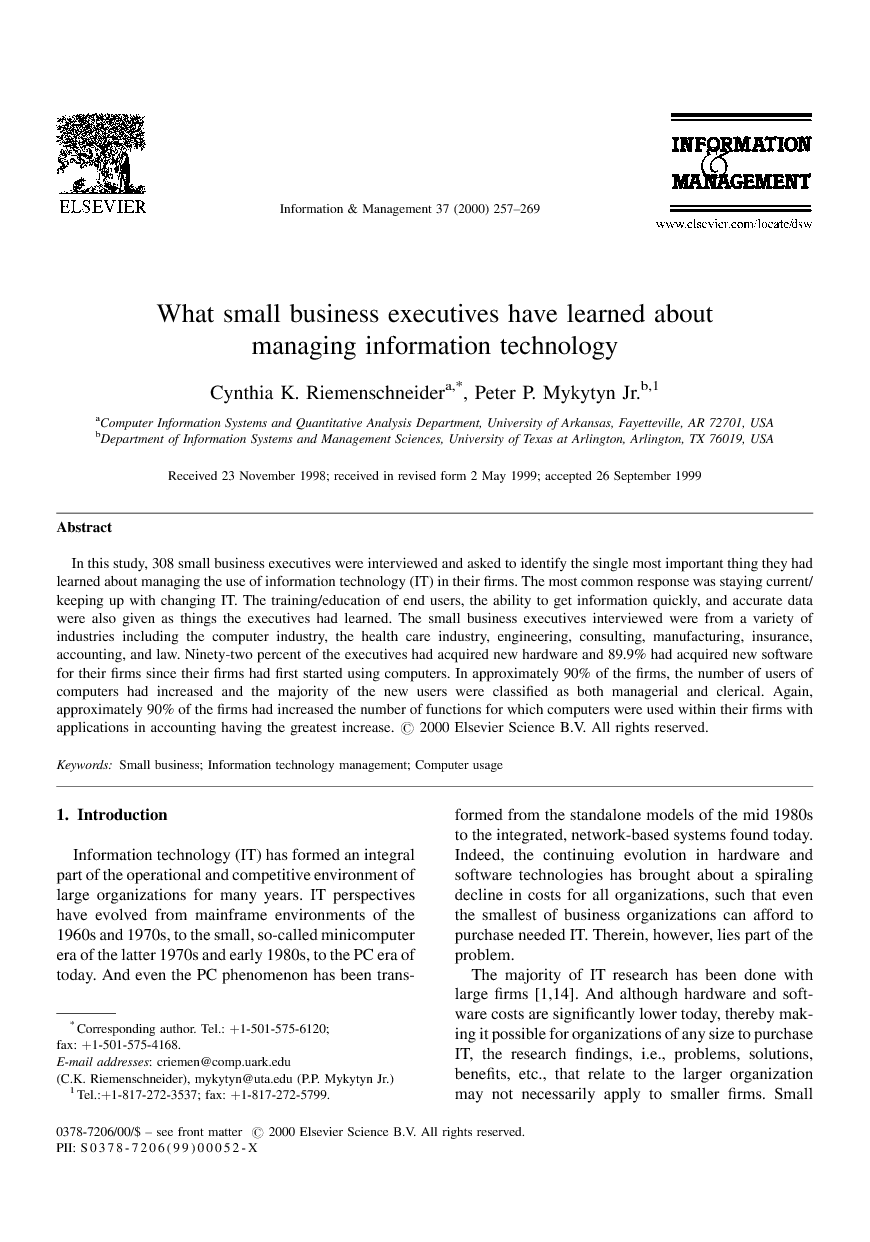 In this study, 308 small business executives were interviewed and asked to identify the single most important thing they had learned about managing the use of information technology (IT) in their firms. The most common response was staying current/keeping up with changing IT. The training/education of end users, the ability to get information quickly, and accurate data were also given as things the executives had learned. The small business executives interviewed were from a variety of industries including the computer industry, the health care industry, engineering, consulting, manufacturing, insurance, accounting, and law. Ninety-two percent of the executives had acquired new hardware and 89.9% had acquired new software for their firms since their firms had first started using computers. In approximately 90% of the firms, the number of users of computers had increased and the majority of the new users were classified as both managerial and clerical. Again, approximately 90% of the firms had increased the number of functions for which computers were used within their firms with applications in accounting having the greatest increase.

Information technology (IT) has formed an integral part of the operational and competitive environment of large organizations for many years. IT perspectives have evolved from mainframe environments of the 1960s and 1970s, to the small, so-called minicomputer era of the latter 1970s and early 1980s, to the PC era of today. And even the PC phenomenon has been transformed from the standalone models of the mid 1980s to the integrated, network-based systems found today. Indeed, the continuing evolution in hardware and software technologies has brought about a spiraling decline in costs for all organizations, such that even the smallest of business organizations can afford to purchase needed IT. Therein, however, lies part of the problem. The majority of IT research has been done with large firms [1] and [14]. And although hardware and software costs are significantly lower today, thereby making it possible for organizations of any size to purchase IT, the research findings, i.e., problems, solutions, benefits, etc., that relate to the larger organization may not necessarily apply to smaller firms. Small businesses employ 54% of the private working population, and they contribute 52% of all the sales in the US [27]. Admittedly, small businesses play a vital role in the economy of the US, and therefore, warrant more study tied to IT than has been conducted previously. Many smaller organizations contain many of the same functions and activities as their larger counterparts, albeit on a lesser scale. These include sales and marketing, manufacturing, accounting, etc. It should be of interest to information systems (IS) researchers and to the business executives themselves to learn more about how these firms have acquired IT, or perhaps upgraded their systems, as well as to gain a deeper understanding of many important problems and managerial issues that have evolved. It should also lead to additional research that could provide for comparisons with larger organizations; similarities, if any, as well as markedly different areas could be identified. The overall purpose of this research is to assess how IT is used in smaller organizations. This examination includes the identification of the different functional areas of firms. Additionally, the results of what small business executives say they have learned about managing IT are presented. In the next section of this paper, we discuss some of the previous research dealing with smaller businesses, drawing attention to the fact that it does not provide either IS researchers or business executives with significant information about IT uses. Following that, the research method is presented. The paper concludes with a discussion and suggestions for additional research.