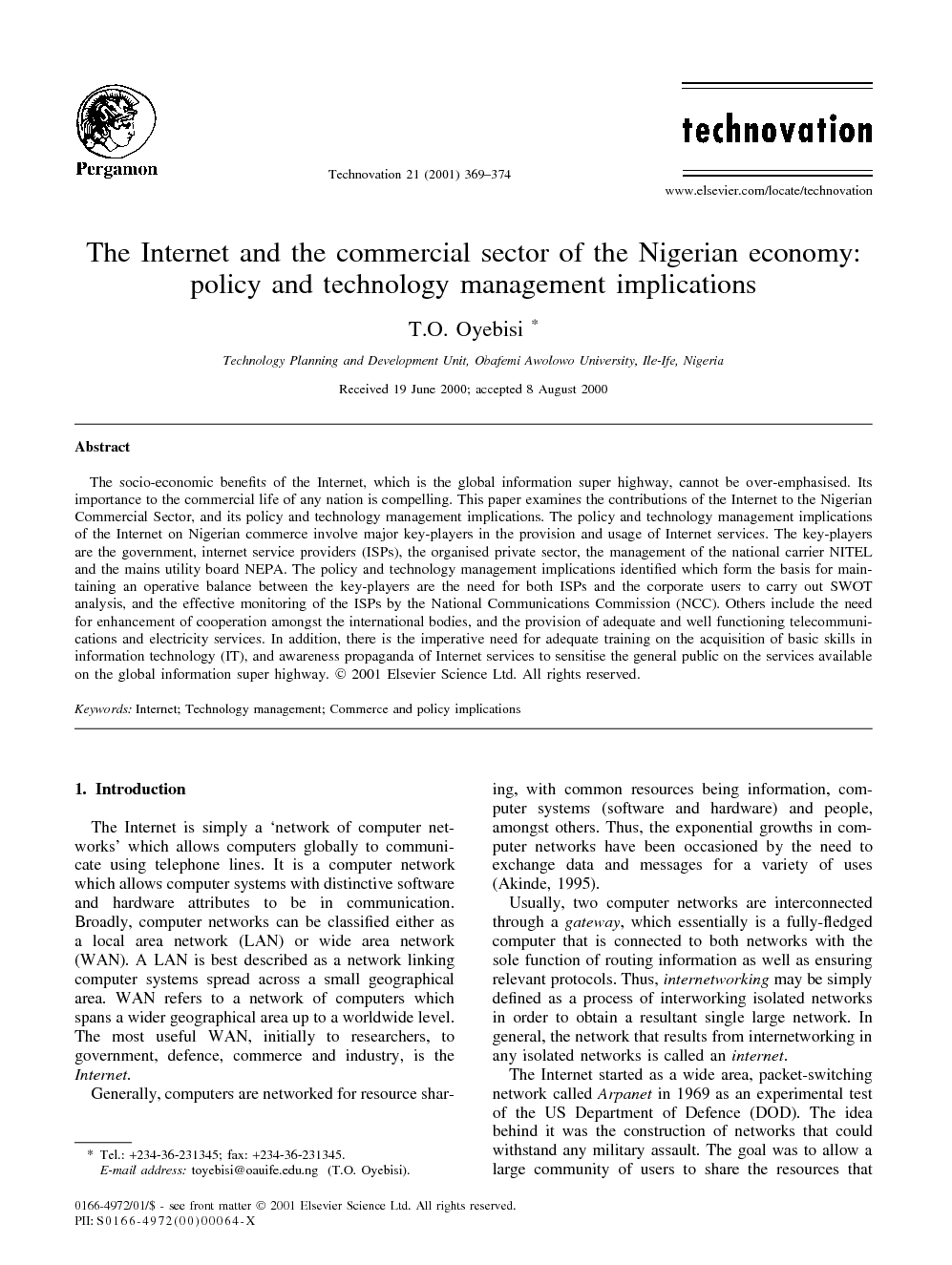 The socio-economic benefits of the Internet, which is the global information super highway, cannot be over-emphasised. Its importance to the commercial life of any nation is compelling. This paper examines the contributions of the Internet to the Nigerian Commercial Sector, and its policy and technology management implications. The policy and technology management implications of the Internet on Nigerian commerce involve major key-players in the provision and usage of Internet services. The key-players are the government, internet service providers (ISPs), the organised private sector, the management of the national carrier NITEL and the mains utility board NEPA. The policy and technology management implications identified which form the basis for maintaining an operative balance between the key-players are the need for both ISPs and the corporate users to carry out SWOT analysis, and the effective monitoring of the ISPs by the National Communications Commission (NCC). Others include the need for enhancement of cooperation amongst the international bodies, and the provision of adequate and well functioning telecommunications and electricity services. In addition, there is the imperative need for adequate training on the acquisition of basic skills in information technology (IT), and awareness propaganda of Internet services to sensitise the general public on the services available on the global information super highway.

The Internet is simply a ‘network of computer networks’ which allows computers globally to communicate using telephone lines. It is a computer network which allows computer systems with distinctive software and hardware attributes to be in communication. Broadly, computer networks can be classified either as a local area network (LAN) or wide area network (WAN). A LAN is best described as a network linking computer systems spread across a small geographical area. WAN refers to a network of computers which spans a wider geographical area up to a worldwide level. The most useful WAN, initially to researchers, to government, defence, commerce and industry, is the Internet. Generally, computers are networked for resource sharing, with common resources being information, computer systems (software and hardware) and people, amongst others. Thus, the exponential growths in computer networks have been occasioned by the need to exchange data and messages for a variety of uses (Akinde, 1995). Usually, two computer networks are interconnected through a gateway, which essentially is a fully-fledged computer that is connected to both networks with the sole function of routing information as well as ensuring relevant protocols. Thus, internetworking may be simply defined as a process of interworking isolated networks in order to obtain a resultant single large network. In general, the network that results from internetworking in any isolated networks is called an internet. The Internet started as a wide area, packet-switching network called Arpanet in 1969 as an experimental test of the US Department of Defence (DOD). The idea behind it was the construction of networks that could withstand any military assault. The goal was to allow a large community of users to share the resources that were available on these computers. The Arpanet provided this service by connecting single hosts and terminal servers into a network. The transmission control protocol/Internet protocol (TCP/IP) was developed as a general set of communication protocols and by 1983, all computers connected to Arpanet used TCP/IP. In 1985, the National Science Foundation of the US began a program to establish network access centred around its six supercomputer centres. However, half a dozen centres equipped with supercomputers could not physically support direct connection to all universities and this led to the idea of regional centres with an inter-connection to neighbouring universities. The regional group was then linked to a NSF centre at one point, and the NSF centres were consequently interconnected. The Internet subsequently emerged as a network of networks. The expansion of the Internet has been phenomenal with about 20 million users, about 3 million nodes and a rate of increase of 1000 nodes per day (Hahn and Stout, 1994). Other networks such as UUCP, FIDOnet, Bitnet, Decnet, etc. provide their clients with the Internet through gateways. The Internet offers services such as electronic mail, file transfer, remote logging, Usenet, Gopher and WAIS (Ajayi, 1995). 1.1. Electronic mail Electronic mail is most popular and widely used with users exchanging messages among themselves using addresses just as in normal postal services. The Internet address is of the form user@place.domain, where ‘user’ designates the user and ‘place.domain’ gives the address of the host system. E-mail has several advantages amongst which are speed, low cost, no need for synchronisation between sender(s) and recipient(s) and the facility of sending mail to several recipients by specifying the list of their addresses as the correspondent's address. 1.2. File transfer protocol (FTP) File transfer protocol provides the facility for transfer of files between Internet sites, as well as listing of directories, copying or writing of files from other systems. Various types of files such as ASCII, binary, compressed, etc. can be handled. Several hundred FTP sites exist, containing several Gbytes of data that can be freely accessed and copied. These sites contain several different types of file which include, inter alia: public access software, publications and pictures. 1.3. Remote logging: Telnet Telnet is used for logging into other computers on the Internet. It is used to access many public services, including library card catalogues and other kinds of databases. It is thus possible to execute commands at the remote site in the same way as they are executed at the local site. 1.4. Usenet news Usenet news consists of a variety of discussion groups on several subjects. It allows one to read (and post) messages that have been sent to public ‘news groups’. The NEWS forms part of the Usenet network. News articles are similar to e-mail, except that the recipient is not an individual address, but rather the name of one or several discussion groups. The NEWS constitutes a very effective source of information. 1.5. Gopher Gopher is a retrieval tool that allows one to browse the Internet for resources using menus. After locating something of interest, one can read or access it through the Gopher without worrying about domain names, IP addresses, and changing programs, amongst other things. 1.6. Wide area information servers (WAIS) WAIS is an Internet utility for accessing indexed information. Unlike Gopher, only the item requested is presented in WAIS and is therefore a distributed text searching system. 1.7. World wide web (WWW) WWW is the newest information service to arrive on the Internet. The Web is based on hypertext technology, developed mostly at CERN, in Geneva. Hypertext is a method of presenting information where selected words in the text can be ‘expanded’ at any time to provide related information about the word. That is, these words are links to other documents which may be text, files, pictures, and any other business information. WWW and Gopher have some similarities, but a fundamental difference between them is the WWW hypertext structure. Other utilities provided by WWW are FTP and reading the NEWS. This article was designed to examine the potential and the impacts of the Internet on commercial life of Nigeria, to review the prospects, and to discuss the policy and technology management implications of the global information super highway.

The tremendous potentials and impacts of the global super highway, the Internet, on Nigerian commercial life has been examined in detail in this paper. In view of its importance, it is expected that the government should help create an environment that will enable Nigeria to take advantage of these services and to participate fully in electronic commerce. This will open up a wider market to all business operators, resulting in better bargaining, increased returns on investment, improved sales volume and reduction in the running costs of businesses. There are, however, certain factors limiting the full appropriation of the benefits of the service delivered via the Internet. Chief among these are the epileptic electricity power supply, and inadequate and over-stressed telephone facilities. The key players in the provision and effective utilisation of the Internet services for commercial purposes are the government, ISPs, the private sector (both organised and informal) and the general public at large. Hence the following steps are suggested to strike an operative balance between all the key players. 1. The appropriate government should formulate and monitor a policy, which is aimed at addressing the issue of security and sanctity of data on the Internet to ensure confidentiality of commercial and business information traversing the super highway. In this regard the NCC, which is the regulatory body, should be expected to monitor the operations of the ISP so that data and business information transmitted over the Internet do not breach any criminal code. 2. The private sector should be encouraged to participate fully in the development of computer systems and other IT products. The organised private sector should initiate and sponsor research projects directed towards local manufacturing of computer systems and other IT devices. 3. Adequate propaganda should be given to the importance of the Internet especially for the commercial sector. The Federal Ministries of Information, Commerce and Industry, and Communication can co-sponsor advertisements in both the printed and electronic media. 4. The national carrier, i.e., NITEL, and the National Electric Power Authority, NEPA, whose services constitute the backbone in the operation of Internet services in Nigeria, should be revitalised and rejuvenated so that they can provide the much needed infrastructural support base for the Internet services. 5. The academic programmes in tertiary institutions should emphasise teaching and research in computer education. 6. The National Policy on Education should be formulated to give special emphasis to computer studies both at primary and secondary levels. 7. There should be cooperation among the ISPs to create a good global environment. International organisations should open up avenues for the creation of new services markets in developing countries; promote the development of open systems and international standards; work resolutely towards opening up to third world markets, and support research and development efforts. They should also develop a policy to promote a common information area, which requires the setting up of an effective system for cooperation between the countries concerned. They should develop policy objectives that are practical and development oriented, or better still, they should be project oriented.