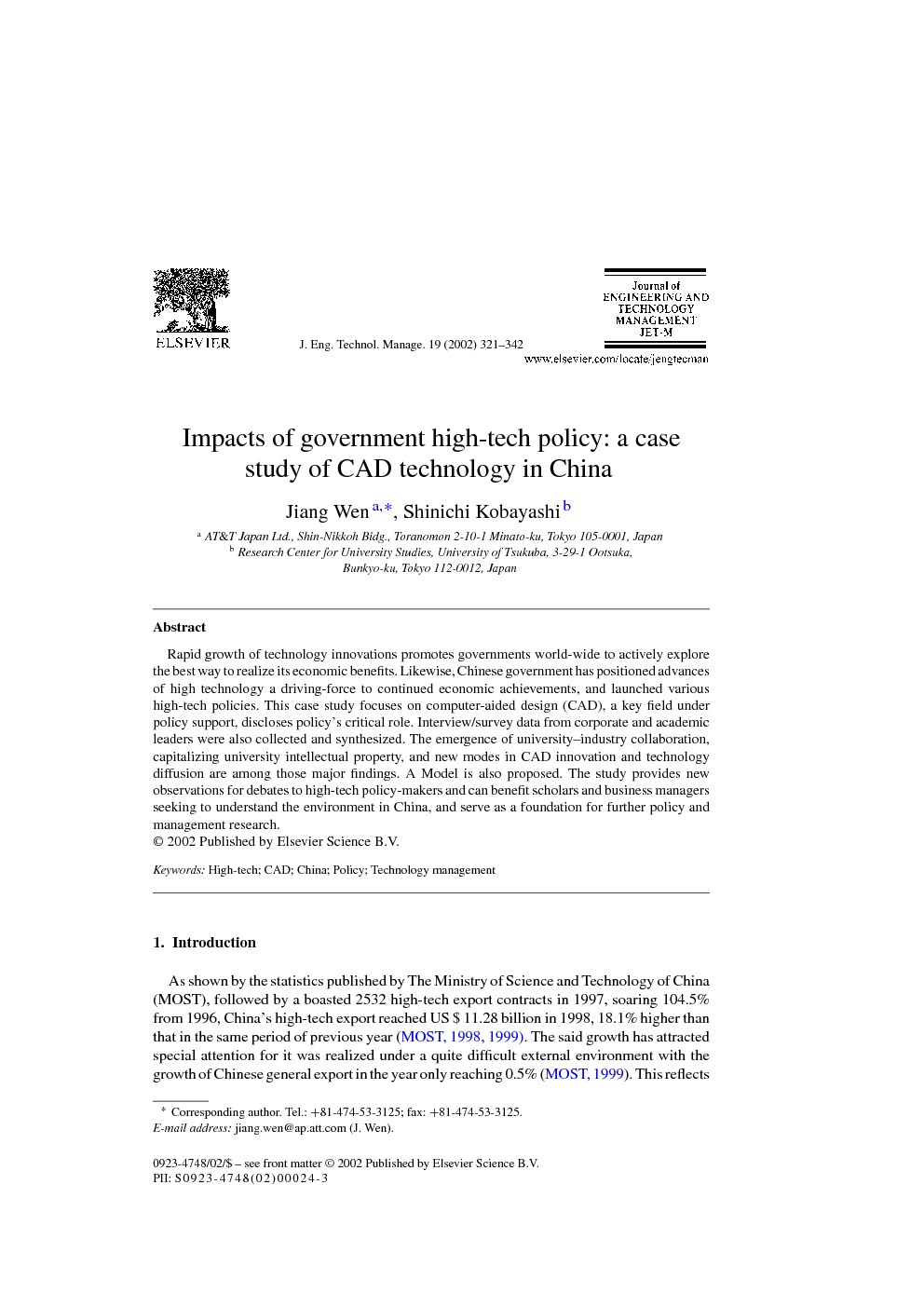 Rapid growth of technology innovations promotes governments world-wide to actively explore the best way to realize its economic benefits. Likewise, Chinese government has positioned advances of high technology a driving-force to continued economic achievements, and launched various high-tech policies. This case study focuses on computer-aided design (CAD), a key field under policy support, discloses policy’s critical role. Interview/survey data from corporate and academic leaders were also collected and synthesized. The emergence of university–industry collaboration, capitalizing university intellectual property, and new modes in CAD innovation and technology diffusion are among those major findings. A Model is also proposed. The study provides new observations for debates to high-tech policy-makers and can benefit scholars and business managers seeking to understand the environment in China, and serve as a foundation for further policy and management research.

As shown by the statistics published by The Ministry of Science and Technology of China (MOST), followed by a boasted 2532 high-tech export contracts in 1997, soaring 104.5% from 1996, China’s high-tech export reached US $ 11.28 billion in 1998, 18.1% higher than that in the same period of previous year (MOST, 1998 and MOST, 1999. The said growth has attracted special attention for it was realized under a quite difficult external environment with the growth of Chinese general export in the year only reaching 0.5% (MOST, 1999). This reflects the impacts and efforts by Chinese Science and Technology (S&T) policy of “revitalizing the country with science and education”, and mirrored the fast growth of high-tech industry in the country, by injecting more value added and technological ingredients. Meanwhile, computer-aided design (CAD) has become a more and more important and widely used technology, due to its importance in manufacturing such as the potential to improve design quality, cut design costs, and shorten the development time of new products to market (Robertson and Allen, 1993). CAD researches started in 1960’s and particular advocated for applications in China in recent years, since the government realized the expanding its presence in the ever increasing international marketplace lie in mostly the large-scale use of CAD technology in sectors such as manufacturing industries and research/design institutes. The government, universities and industry have been actively involved and invested heavily in CAD innovations and national campaigns to diffuse CAD knowledge and encourage CAD uses. Under such environment, the rapid growth of indigenous CAD development technology is witnessed in recent years, and the industry is becoming more and more dependent on CAD technology to enhance productivity. This case study is one of the first attempts to explore the driving forces behind the nation-wide CAD technology development and application boom in China, namely the government high-tech policies, university-originated and university–industry collaborated CAD innovations, and government-intervened network establishment for CAD knowledge diffusion. Author’s long years’ business experience contributed significantly to the completion of this paper. In this paper, S&T policy-making organizations and major policy issues in China are firstly examined in general terms, by tracing the evolution of S&T policy and focusing on empirical studies on high-tech policy and its major outputs. Following is the analysis of technological engine on CAD innovations by means of synthesizing collected data from interviews and surveys to the management of leading indigenous CAD vendors and case studies. Patterns on the classifications of CAD vendors in China are also identified. Then, we present evidence concerning the growth and influence of nation-wide CAD promotion network, another key driver on CAD technology diffusion, characterizing with inter-organization, inter-sector and inter-region network in China. Finally, A Model is proposed for CAD development in China, which may apply to other high-tech areas inside and outside China. This paper aims to benefit two professional groups: (1) S&T policy-makers, and (2) business managers seeking to understand the high-tech, particularly CAD environment, in China. It also provides a foundation for further technology policy and innovation management research in China.