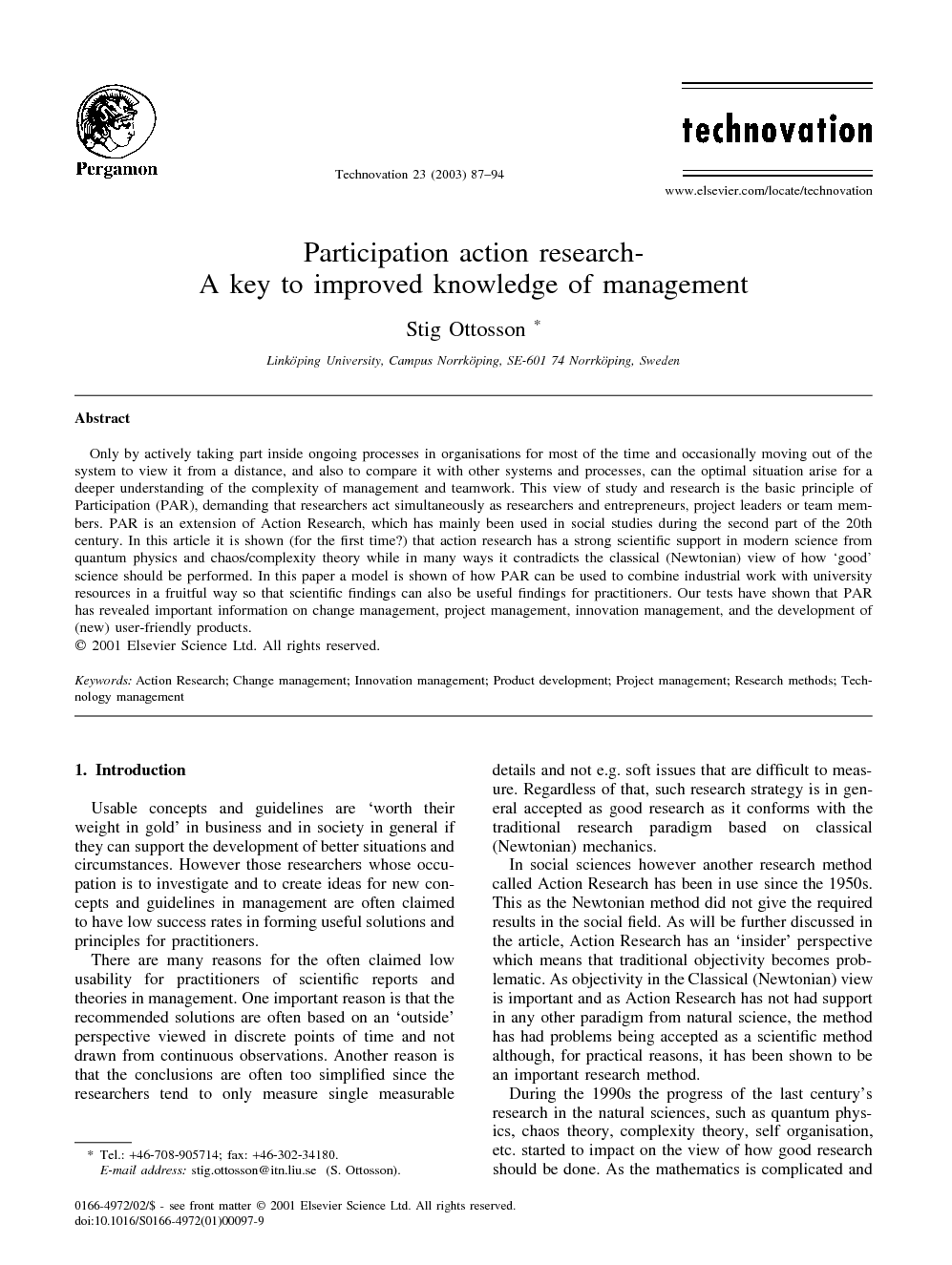 Only by actively taking part inside ongoing processes in organisations for most of the time and occasionally moving out of the system to view it from a distance, and also to compare it with other systems and processes, can the optimal situation arise for a deeper understanding of the complexity of management and teamwork. This view of study and research is the basic principle of Participation (PAR), demanding that researchers act simultaneously as researchers and entrepreneurs, project leaders or team members. PAR is an extension of Action Research, which has mainly been used in social studies during the second part of the 20th century. In this article it is shown (for the first time?) that action research has a strong scientific support in modern science from quantum physics and chaos/complexity theory while in many ways it contradicts the classical (Newtonian) view of how ‘good’ science should be performed. In this paper a model is shown of how PAR can be used to combine industrial work with university resources in a fruitful way so that scientific findings can also be useful findings for practitioners. Our tests have shown that PAR has revealed important information on change management, project management, innovation management, and the development of (new) user-friendly products.

Usable concepts and guidelines are ‘worth their weight in gold’ in business and in society in general if they can support the development of better situations and circumstances. However those researchers whose occupation is to investigate and to create ideas for new concepts and guidelines in management are often claimed to have low success rates in forming useful solutions and principles for practitioners. There are many reasons for the often claimed low usability for practitioners of scientific reports and theories in management. One important reason is that the recommended solutions are often based on an ‘outside’ perspective viewed in discrete points of time and not drawn from continuous observations. Another reason is that the conclusions are often too simplified since the researchers tend to only measure single measurable details and not e.g. soft issues that are difficult to measure. Regardless of that, such research strategy is in general accepted as good research as it conforms with the traditional research paradigm based on classical (Newtonian) mechanics. In social sciences however another research method called Action Research has been in use since the 1950s. This as the Newtonian method did not give the required results in the social field. As will be further discussed in the article, Action Research has an ‘insider’ perspective which means that traditional objectivity becomes problematic. As objectivity in the Classical (Newtonian) view is important and as Action Research has not had support in any other paradigm from natural science, the method has had problems being accepted as a scientific method although, for practical reasons, it has been shown to be an important research method. During the 1990s the progress of the last century's research in the natural sciences, such as quantum physics, chaos theory, complexity theory, self organisation, etc. started to impact on the view of how good research should be done. As the mathematics is complicated and as the results are very different from what we have all learnt is right seen in a large perspective and for stable situations, the term quantum physics unfortunately often immediately cuts out most people who regard it as something they will not be able to understand. Unfortunately, very few scientists in physics have bothered to explain their findings in pedagogic daily terms for those lacking the mathematical background. One example of this is the often claimed very strange situation that matter simultaneously acts as particles and waves. However this is like a speedboat acting as an object/particle/point which sends waves in the water that can interact with waves from other objects. In fact it is very strange to imagine a moving speedboat that does not create waves, which is what we still reagard as normal, due to classical thinking in which matter only can act as particles or waves—thus either/or and not both/and. A manager who rushes through the office acts as a particle and sends waves that are interpreted by his staff due to their interpretations of what they see—i.e. the body language of the manager. One bad interpretation of these ‘waves’ may be the origin of unwanted actions that can be amplified to form a chaos situation—examples from quantum physics being a discontinuous situation, a self-organising situation, an indeterminate situation, and a small effect situation. Unfortunately it is also an example of an irreversible process as it cannot be undone. The Quantum paradigm is of great importance for research on management and especially innovation management and change management. Fortunately a number of non-mathematical books on the topic have recently been published (see e.g. Barbour, 1999, Görnitz, 1999, Wheatley, 1999, Kaku, 1998 and Zohar, 1997). The authors all have a background in physics, as has the author (originally having a Ph.D. in physics). From studies of state-of-the-art quantum physics and chaos/complexity theories, the author has produced Table 1. The consequences of the Quantum paradigm are rather shocking for scientists and managers who seek a rational world due to the Classical (Newtonian) paradigm. In fact, the new science turns much management orthodoxy completely on its head. Some examples from Stacey (1992) are: &#x02022; Analysis loses its primacy &#x02022; Contingency (cause and effect) loses its meaning &#x02022; Long-term planning becomes impossible &#x02022; Visions become illusions &#x02022; Consensus and strong cultures become dangerous &#x02022; Statistical relationships become dubious This paper discusses, to some degree, the shortcomings of classical research methods. Action Research will be treated in more detail. At the end of the paper a special performance of Action Research that we call Participation Action Research (PAR) is described, which is useful for investigations of the mysteries of management and especially innovation management and change management.

Traditional research demands that researchers should not be involved in the studied object in a way that could affect their objectivity. However, the new Quantum paradigm tells that true objectivity does not exist, only relative objectivity, and the subjectivity of each individual. When performing action research, the researcher does not violate but obey modern scientific thinking when he/she is inside the studied process and is completely involved in it. Philosophically this is a completely opposite way of conducting research to the classical (Newtonian) mechanical thinking. However, when investigating and understanding the behaviour of ‘dead bodies and enclosed matter’ the traditional research methods are sufficient in many cases. When investigating and understanding the behaviour of living spiritual bodies, organisations and living material, PAR has shown in our research that this method produces information impossible to obtain with classical methods. PAR provides profound, good information and is especially useful when the understanding of ongoing processes is vital for later creation of new guidelines and tests of hypotheses in management. Thus, the researcher will always gain a better understanding of his/her observations when there is maximum mental and minimal geographical proximity between the researcher and the studied object. In addition, there will be a deeper dimension when he/she is deeply involved in the process compared with if he/she participates occasionally. Also, the longer the time span between the occurrence of the studied event and the longer the metrical distance to the locus of action, the lower the reliability will be of the conclusions drawn by the researcher and the theories he/she proposes from his/her studies. In particular, there are many positive aspects to the advantage of PAR when extraordinary management is performed e.g. in the area of innovation management, new product development, new product platform development, and change management. Some are: &#x02022; access to both top management, employees, customers, and users, etc., &#x02022; hypotheses can be tested with relatively fast feedback on achieved results, &#x02022; the researchers obtain a very deep understanding of the process they are studying, &#x02022; other people involved acquire personal and collective knowledge that is difficult to obtain without scientific aspects, &#x02022; in short, the dialogue is the focus of action research. It is the social space where the action takes place, where the knowledge is generated and where the relationship between theory and practice is managed, &#x02022; unspoken needs or demands can be discovered. Unspoken information and diffuse information is extremely difficult to take into consideration when using classical research methods. When conducting PAR, however, unspoken information is of great value and will be captured in a natural way. At the same time, unspoken information is extremely difficult to record for the critical judgement of other researchers. However, as the result of the activities in general is visible to anyone, this might be a balancing factor. Are there any ‘risks’ in using action research? The method contains many ‘both… and…’ situations that are important for a good understanding of each situation. For example, the researcher sees things and makes judgements. He/she is ‘inside and outside’ at the same time. He/she is simultaneously engaged in an inter- and intra-personal process. The researcher is busy with the development of a situation as well as his/her own learning. He/she can contribute too much and inhibit the learning of others or do too little and not give the opportunity to learn from their experience. The researcher has to come close but stay at a distance at the same time. This requires considerable maturity on the part of the researcher and that he/she must have self-knowledge, a capacity to learn about himself/herself, a strong orientation towards learning to learn, etc. Therefore PAR seems to be a more suitable method for some than for others except for the risk of being regarded as performing bad research by those who still obey the old Classical paradigm.