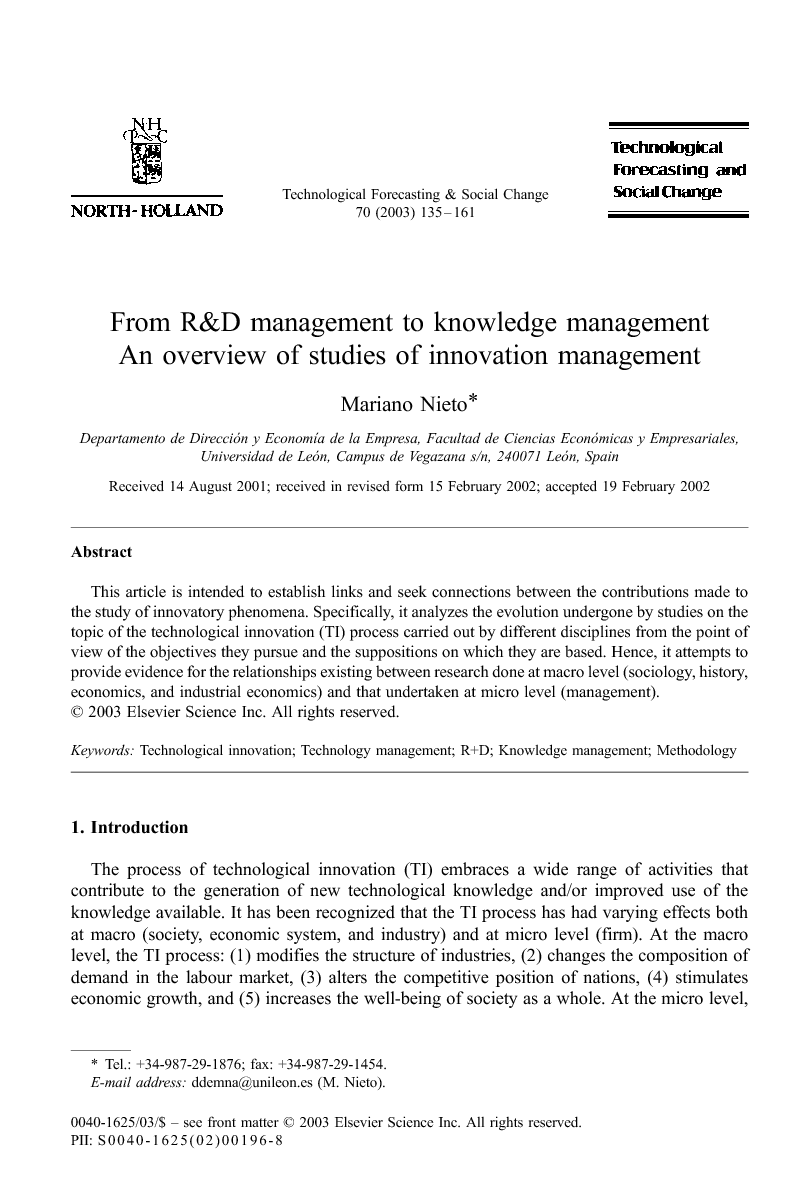 This article is intended to establish links and seek connections between the contributions made to the study of innovatory phenomena. Specifically, it analyzes the evolution undergone by studies on the topic of the technological innovation (TI) process carried out by different disciplines from the point of view of the objectives they pursue and the suppositions on which they are based. Hence, it attempts to provide evidence for the relationships existing between research done at macro level (sociology, history, economics, and industrial economics) and that undertaken at micro level (management).

The process of technological innovation (TI) embraces a wide range of activities that contribute to the generation of new technological knowledge and/or improved use of the knowledge available. It has been recognized that the TI process has had varying effects both at macro (society, economic system, and industry) and at micro level (firm). At the macro level, the TI process: (1) modifies the structure of industries, (2) changes the composition of demand in the labour market, (3) alters the competitive position of nations, (4) stimulates economic growth, and (5) increases the well-being of society as a whole. At the micro level, the TI process: (1) affects the competitiveness of businesses and (2) gives an orientation to the design of their strategies. The extent of the effects of technological progress has aroused growing interest in the study of innovatory phenomena. The TI process has been studied by all the disciplines having to do with socioeconomic phenomena: history, sociology, economics, industrial economics, and management. Thanks to this research, our understanding of the nature of the TI process has improved notably. However, a great part of the efforts undertaken by researchers in each of these disciplines is not made use of by the other academic communities. This is due to the presence of a number of obstacles standing in the way of communication and exchange of knowledge among the various groups of investigators. On the one hand, there are barriers between these disciplines because each employs different units of analysis and they all have different preferences for the study of a limited number of points. The truth of this can be easily shown simply by observing the absence of bibliographical cross-references between scholars of different disciplines in the articles they publish in any of the academic journals. On the other hand, the members of one and the same academic community also encounter difficulties in making use of results from within in it, owing to the lack of a generally accepted common terminology and the use of different methodological approaches. These obstacles slow down research activity and render more difficult the study of the nature of the TI process. Over recent years, advances have been made in bringing together contributions proceeding from differing disciplines and methodological approaches. This is demonstrated by the fact that the most widely used text books on managing innovation (e.g., [1], [2] and [3]) usually include studies on innovatory phenomena drawn from other disciplines. Furthermore, some theoretical works have tried to integrate and find coherence among the research undertaken by distinct academic communities [4], [5], [6] and [7]. Such works implicitly recognize that TI is a highly complex process and postulate that its study should have a multidisciplinary character. They strive to integrate different approaches and thus contribute to the presentation of a wider and more consistent vision of the TI process. This article lies within this orientation and is intended to look into the evolution of studies carried out in the innovation management. It also considers the influences exercised over these studies by the whole range of research into the process of TI undertaken by other disciplines such as sociology, history, economics, and industrial economics. To this end, the main contributions to the study of innovation are split into two levels: macro and micro studies (Section 2). Thereafter, the concepts noted in macro level studies allow these to be further divided into two clearly differentiated approaches, which are static approaches and dynamic approaches (Section 3). The development of micro level studies carried out by the management is then considered, allowing them to be grouped into three phases or stages that relate to the predominance of three differing methodological approaches. These are: an operational approach; a structure–conduct–performance approach (SCP); and a resource-based approach (Section 4). While in the first two phases the influence of static approaches is evident, the third and last show a dominant position for dynamic approaches (Section 5).

Thanks to the contributions made by sociology, history, economics, industrial economics, and business management, the comprehension of innovatory phenomena has improved over recent years. Nevertheless, one of the reasons explaining why it has not advanced more rapidly is that many researchers have been unaware of the contributions coming out of other fields of knowledge than their own. Hence, if the conceptual framework of reference is to be established permitting the study of the TI process at the level of the firm, there is a need to break down the methodological and conceptual barriers separating these disciplines. By drawing comparisons between the results of studies carried out at macro (society, economic system, industry) and at micro level (firm, R&D department, R&D project, product), it is possible to observe that, apart from certain divergences in terminology and methodology, they are highly consistent one with another. Despite the fact that differences in the research traditions of each of the academic communities have led to the use of differing terms and concepts to describe similar or identical phenomena, certain similarities and coincidences can be observed among them. Indeed, the assumptions made by the various disciplines about the nature of the TI process and the characteristic of technology evolve in parallel over time in almost perfect synchronization (Fig. 1). In general terms, in all these disciplines there has been a move from supposing that the TI process was exogenous and static in character and that in this way no economic agent could impinge on it, to holding that it is of a dynamic and endogenous nature and determined by various social, economic, and business factors. This change has been accompanied by a shift in the perception of the characteristics of the principal product of the process of innovation: technology. From a belief that the fundamental component of technology is information, there has been a move to considering it at bottom as knowledge. A further question to be broached is the way in which work done at macro level has exercised a notable influence on studies carried out at micro level. The assumptions and methodologies established by static approaches (especially neoclassical economics and industrial economics) are tightly linked with those taken on board by the first two stages of work on managing innovation within firms (operational approach and SCP approach). In fact, these approaches have contributed to it being seen as more interesting to get to know the causes determining the stock of technological know-how in firms at a given moment, than to identify the factors affecting its accumulation over time. Hence, research effort was oriented towards cross-sectional analyses and developing models that can only reflect static situations. On the other hand, dynamic approaches (especially evolutionary economics) have exercised noteworthy influence over the third phase of studies on managing innovation (resource-based approach). The most recent contributions in this field attempt to reflect the time dimension of the process of innovation and so seek a foundation in historical evidence and longitudinal analyses.