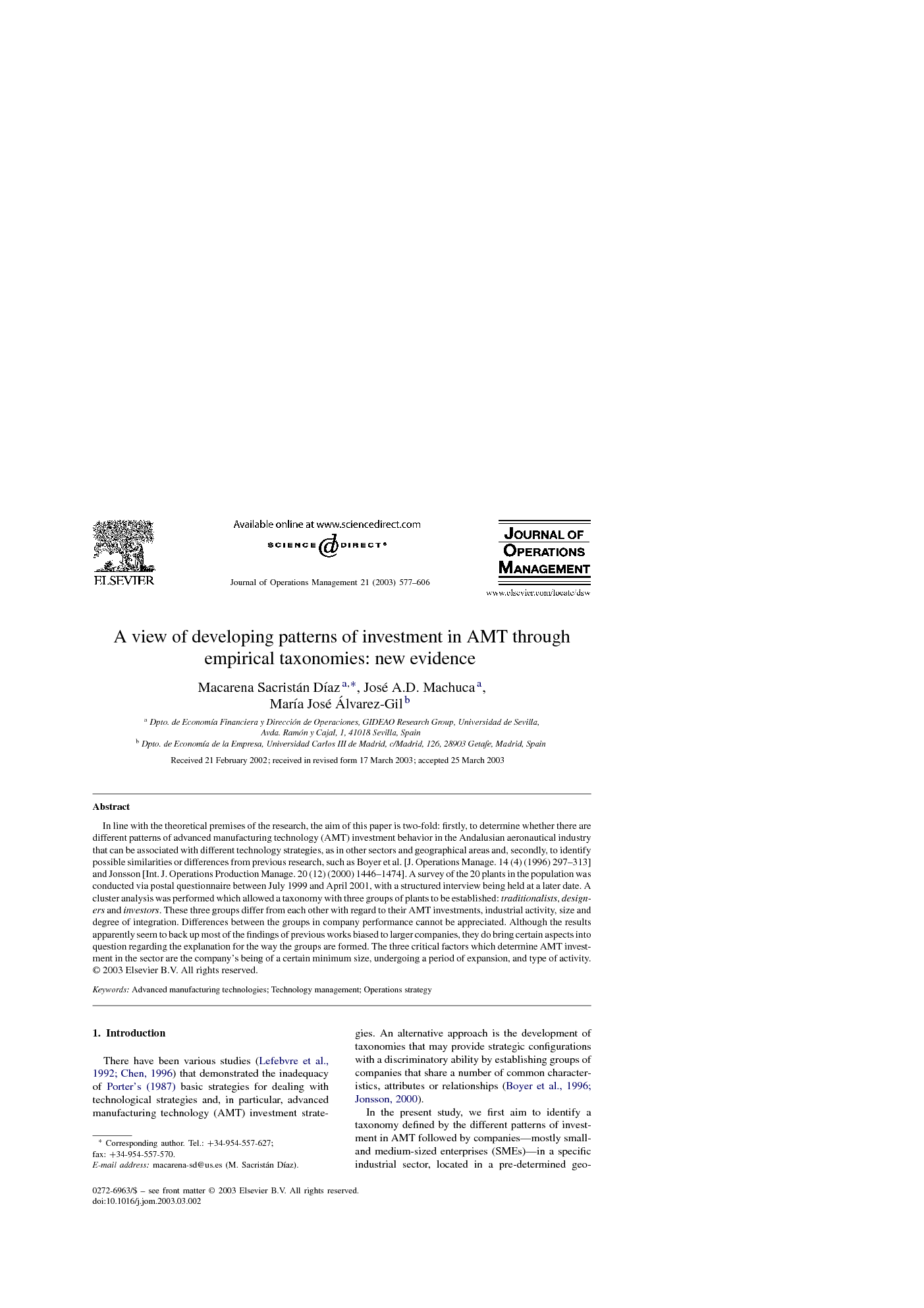 In line with the theoretical premises of the research, the aim of this paper is two-fold: firstly, to determine whether there are different patterns of advanced manufacturing technology (AMT) investment behavior in the Andalusian aeronautical industry that can be associated with different technology strategies, as in other sectors and geographical areas and, secondly, to identify possible similarities or differences from previous research, such as Boyer et al. [J. Operations Manage. 14 (4) (1996) 297–313] and Jonsson [Int. J. Operations Production Manage. 20 (12) (2000) 1446–1474]. A survey of the 20 plants in the population was conducted via postal questionnaire between July 1999 and April 2001, with a structured interview being held at a later date. A cluster analysis was performed which allowed a taxonomy with three groups of plants to be established: traditionalists, designers and investors. These three groups differ from each other with regard to their AMT investments, industrial activity, size and degree of integration. Differences between the groups in company performance cannot be appreciated. Although the results apparently seem to back up most of the findings of previous works biased to larger companies, they do bring certain aspects into question regarding the explanation for the way the groups are formed. The three critical factors which determine AMT investment in the sector are the company’s being of a certain minimum size, undergoing a period of expansion, and type of activity.

There have been various studies (Lefebvre et al., 1992 and Chen, 1996) that demonstrated the inadequacy of Porter’s (1987) basic strategies for dealing with technological strategies and, in particular, advanced manufacturing technology (AMT) investment strategies. An alternative approach is the development of taxonomies that may provide strategic configurations with a discriminatory ability by establishing groups of companies that share a number of common characteristics, attributes or relationships (Boyer et al., 1996 and Jonsson, 2000). In the present study, we first aim to identify a taxonomy defined by the different patterns of investment in AMT followed by companies—mostly small- and medium-sized enterprises (SMEs)—in a specific industrial sector, located in a pre-determined geographical zone. We shall specifically consider the aeronautical sector in Andalusia, southern Spain,1 for the period July 1999 to April 2001. This leads us on to the second objective of this research, which is to identify any possible similarities and differences from previous studies and the reasons for these. The working hypotheses put forward to explain the reasons why the different groups are formed point in two directions. Firstly, there is the influence that a variety of different factors (activity, size, competitive priorities, and information and catalyst elements) may have on these patterns. Secondly, there are possible differences between groups with respect to the level to which their activities and company performance are integrated. A graphical representation of the theoretical model incorporating these relationships can be found in Fig. 1. There has been scant analysis of the effect had by competitive priorities in previous studies, and we are not aware of any analysis that links information and catalyst elements with levels of AMT investment. The third objective we have therefore set for ourselves is the provision of new data not found in previous works, albeit in an exploratory phase and with no view to generalization. Various factors led us to conclude that conducting an empirical analysis into the Andalusian aeronautical sector was particularly interesting and opportune. Firstly, this sector is strategically important, not only for Andalusian industry, but also for Spain’s and the European Union’s as a whole; secondly, it is extremely technologically-intensive and as such is a potential user of a wide and diverse range of AMT; thirdly, it was an inducement that this sector had not previously been the subject of many specific scientific studies into AMT management. Finally, the companies in the sector are, for the main part, small- and medium-sized, with 40% having a workforce of under 50 employees. We therefore thought our study could contribute to mitigating the lack of research aimed at identifying investment taxonomies for smaller plants; as we shall see, existing work has thus far been highly biased towards larger companies. The Andalusian aeronautical industry includes a number of Construcciones Aeronáuticas S.A. (CASA) manufacturing plants. CASA, the Spanish national aeronautical company, has been a member of the Airbus Consortium since 1971 and of the European Aeronautic, Defense and Space Company (EADS) since its creation in 2000. The sector also includes a number of SME ancillary firms with customers who number not only other Spanish aeronautical companies, such as CASA itself, but also foreign companies, such as Boeing. According to statements made by the President of Boeing Europe, Richard L. James, in 1999, in the Seville area alone there were more than five companies manufacturing no fewer than 3500 different parts for the Boeing 717. It was always considered imperative to include the CASA group factories in the analysis. On the one hand, this was a prime necessity if the whole population were to be studied, and, on the other, it allowed a clear company size distinction to be made. The fact that all the factories belonged to the same group does not distort the results, as CASA was not part of EADS at the time of our study. Furthermore, each of the group’s factories devised its technology strategy independently from the others, not only as far as the choice of equipment is concerned, but also with respect to the equipment evaluation process, even though the final choice was subject to approval by Head Office (as confirmed by the Heads of the Engineering Departments that we consulted). Section 2 reviews literature in order to establish what the possible advantages associated with the use of taxonomies are, as well as to identify the theoretical parameters on the basis of which our hypotheses can be formulated. The hypotheses are set out in Section 3, and in Section 4, they are tested empirically. In Section 5, the results are analyzed and discussed. Finally, in Section 6, conclusions are drawn and possible future lines of research are proposed.